On December 1st, 2020, Amazon announced a suite of new AWS machine learning services. To many, this announcement appeared to be Amazon’s launching off point towards being a major supplier of predictive maintenance solutions. However, this announcement follows a long history of Amazon carving out its capabilities in industrial digitalization. Since the ecommerce behemoth’s 2018 release of AWS IoT Sitewise, a service which enables its users to gather and organize asset health related data housed in repositories such as a historian, Amazon has consistently added to its industrial digitalization offering.  Now, the company has a highly competitive solution with one capability completely unique to Amazon.

Amazon’s Industrial Digitalization Offering Has Been Developing for Years

In some ways, Amazon’s announcement of its new suite of machine learning services represents a rounding out of a predictive maintenance offering rather than a jumping off point. When manufacturers are looking at implementing predictive maintenance into their facilities, they are asking these fundamental questions:

The announcement of AWS IoT Sitewise was Amazon’s solution to the first question. Many manufacturers in process industries generate large amounts of data from the devices controlling their machines. This data is often stored in a historian and without the tooling necessary to effectively manage and analyze such data, much of its value can be lost. AWS IoT Sitewise was developed so manufacturers could more effectively utilize this data for condition monitoring/predictive maintenance purposes. The solution is deployed through software housed in a gateway which then communicates the collected data to the AWS cloud. In our opinion, this marked Amazon’s true entry into the predictive maintenance market. Strategically, this was a logical first move. Amazon already had a wealth of analytical tools it could deploy to make use of data housed in a historian, the only thing needed was a mechanism for gathering and organizing that data to be analyzed.

Fast forward to Amazon’s recent announcement and we see the company moving to provide a solution to question two. One asset that is cited often as being “offline” from a condition data perspective are the mechanical portions of a motor driven system i.e. induction motors, gearboxes, bearings blocks, etc. These components are numerous throughout factory floors and their failure can represent significant loss of production if they are part of an application critical process. The industry has responded to this need by offering smart sensors, a wireless enabled sensor which can be connected to the side of a motor for purposes of gathering data on vibration and temperature behavior. These two data points, when combined with machine learning algorithms, can quickly illuminate what kind of stress motor components are facing and alert its users of problems ahead of failure.

One of the services announced in late 2020 has been coined Amazon Monitron. The solution utilizes smart sensors and gateways produced by Amazon to offer up data on the health of motor system equipment; effectively solving the problem of gathering data on assets not being monitored via historian data. This solution is in direct competition with predictive maintenance providers like ABB, Siemens, SKF, etc. In our view, the announcement of Monitron means Amazon now has a solution which fully addresses the needs of manufacturers looking to invest in predictive maintenance as part of a broader industrial digitalization initiative. Amazon’s utilization of data housed in a historian, combined with its smart sensor offering and vast analytics capability offered through AWS, make this solution as competitive as any on the market. Amazon does however have one distinct advantage over competition however: being a provider of cloud storage.

Every platform offered by the major providers of predictive maintenance are built on cloud storage technology offered largely by either AWS or Microsoft Azure. ABB Ability cites Microsoft Azure as the landscape in which Ability operates. Similarly, Schneider Electric’s Ecostuxure platform utilizes Microsoft Azure. Siemens Mindsphere has developed the capability to be used with either AWS or Azure, announcing its compatibility with the latter in 2018. The full development of Amazon’s industrial digitalization offering represents the first time a supplier has the ability to provide both the cloud storage and analytic capabilities under one entity.

One of the largest barriers facing suppliers of predictive maintenance solutions is manufacturers’ reluctance to host its operational data on the cloud. Recently, Interact Analysis partnered with the Association for Packaging and Processing Technologies (PMMI) to produce a white paper and accompanying survey pertaining to adoption of predictive maintenance technology within the packaging industry. The whitepaper and survey results are available for download for free via this link. One of the questions asked in the survey looked at the adoption of predictive maintenance within OEM and system integrator offerings. “Our customers will not allow remote access to their machinery” received the second highest weighted score according to the survey.

Question: To what extent are the following statements describing the adoption of predictive maintenance (PdM) technologies at your company, true or false? 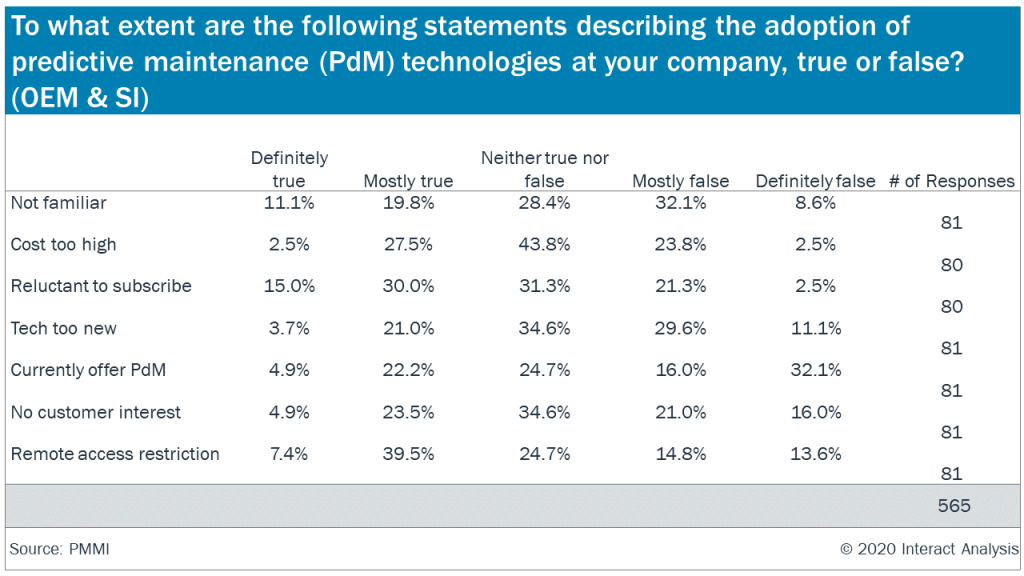 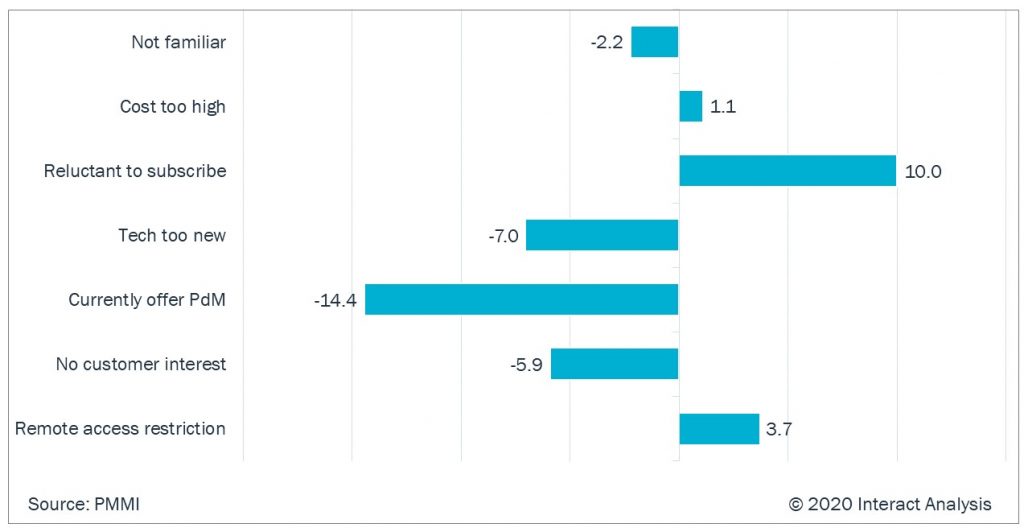 This hesitancy by users to allow access to operational data has led suppliers to develop solutions which, instead of aggregating and analyzing data in the cloud, host their data for analysis onsite.

Amazon has addressed this concern by offering an on-premise version of AWS. This on-premise version of AWS, termed AWS Outpost, was released in 2019 and is designed to serve applications requiring low latency. In our opinion however, outpost will also serve as an option for customers looking to implement predictive maintenance who may be shy of hosting their operational data on the cloud. Keeping data onsite as opposed to in the cloud ensures the door to the OT network remains closed; something many manufacturers are keen to maintain.

Having the power of a modular cloud system like AWS on-premise is an incredibly powerful development in the predictive maintenance market. AWS Outpost will be regularly updated and patched by a regional AWS team which ensures that users are still able to take advantage of the scale at which AWS operates. This is an important consideration when working with machine learning algorithms which become more accurate when deployed at scale. Current on-premise predictive maintenance solutions sacrifice this accuracy in favor of the increased security which on-premise brings. With AWS Outpost, users will no longer have to make that sacrifice. Additionally, if you define an edge device as the point at which data is pushed to the cloud, this solution effectively eliminates the need for such devices thus simplifying the overall architecture.

At the very least, this announcement should be taken as a signpost of future growth within an already fast-growing predictive maintenance market. Amazon does not enter markets which are expected to appreciate modestly; it enters markets whose opportunity could one day be worth billions of dollars. The amount of time spent developing, releasing, and improving upon Amazon’s industrial digitalization offering should be indicative of the faith the company has in the future of this market.

To continue the conversation with our Senior Analyst Blake Griffin, get in touch today: blake.griffin@interactanalysis.com