– Does it make sense to burn a fuel that is expensive and, for the moment, made from fossil fuels?

– Is it just a niche solution for a short-term problem?

As the song goes, “Birds do it, bees do it; even educated fleas do it. Let’s do it, let’s fall in love”. And so engine manufacturers seem to be rushing to fall in love with hydrogen combustion engines.

JCB announced in May that it would be developing such a solution. And hot on the heels of this news we have seen Cummins, Caterpillar, Liebherr and the GAC Group make announcements that they too will be trialing and developing hydrogen combustion engines for a variety of applications.

Is it a mad rush of blood to the head, or is it is a sensible strategy for commercial vehicles?

In the beginning, there was light

Hydrogen was the first element to form from the cooling maelstrom of the Big Bang. It is the most abundant element and, in some ways, the most abundantly talked about when it comes to decarbonization. In various quarters it is viewed as a panacea: it will help to curb global warming whilst allowing society to maintain the dual privileges of personal transport and high-energy use. It can be produced sustainably from renewables (wind or solar) and, when it is used in a fuel cell system, produces zero emissions, save water.

In the mix of combustion engines fueled by hydrocarbons, hybrids, battery electrics and hydrogen fuel cells, is there room for another engine type?

Does the technology make sense?

A hydrogen fueled combustion engine works in much the same way as a diesel fueled combustion engine. Hydrogen is combusted to produce water with no carbon-based emissions; however, the temperature of the reaction produces nitrogen oxides, which are harmful to human health. Whilst these emissions can be minimized by controlling the combustion process or aftertreatments, they can never be completely removed, and the control process adds costs to the engine.

In addition to emissions and the costs associated with minimizing them, a ‘regular’ combustion engine designed to use diesel needs to be modified to run on hydrogen, adding further cost. Additionally, a weighty set of high-pressure hydrogen tanks must be added to the vehicle, further increasing cost and decreasing the cargo payload.

Surely there is some payback on fuel costs even if the engine costs more? If we assume that the system efficiency of diesel engines and hydrogen engines is the same AND that the engines have the same power output, we can look at the following table based on UK pricing: 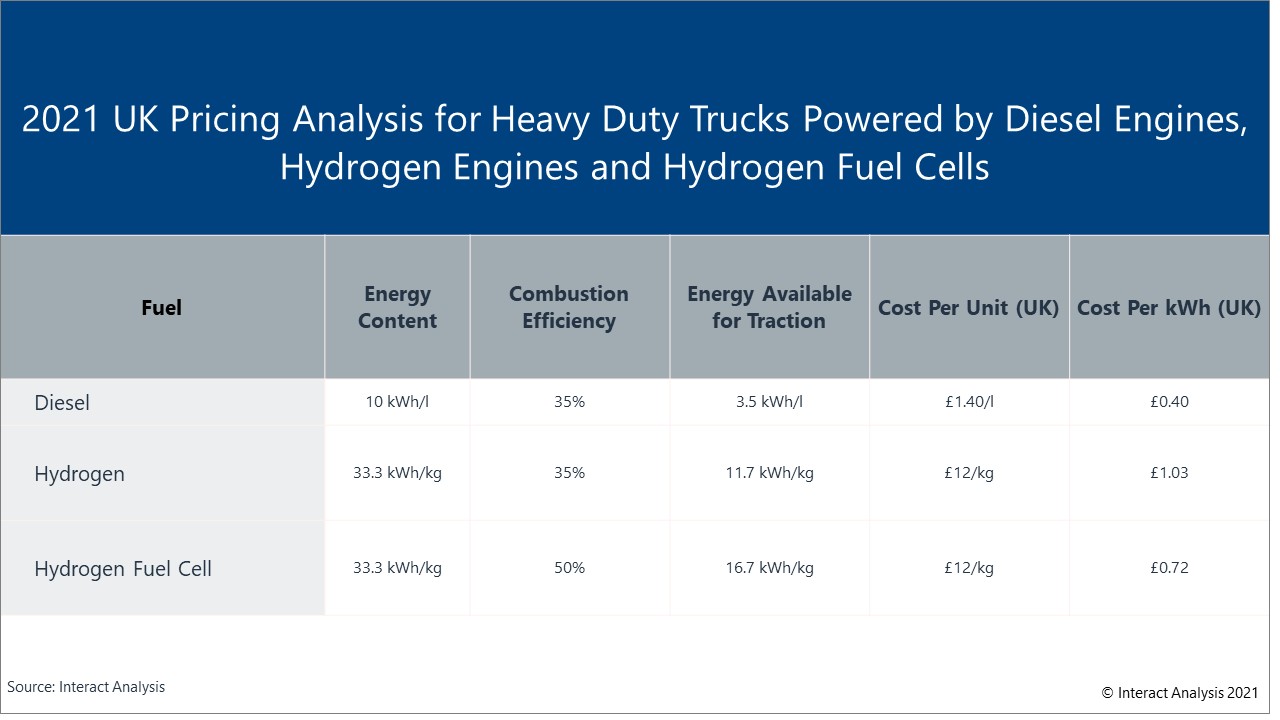 Unfortunately, the picture is bleak. The current cost of hydrogen means that, not only is the engine/vehicle more expensive, but it costs substantially more to run – not something that is mentioned in the slick PR and marketing behind these projects. Proponents of the technology will argue that the cost of hydrogen will decrease with scale (true, but on a timeline of 5-10 years) and that ‘electrified’ powertrains – battery or fuel cell – cost substantially more upfront. On this latter point, that is true right now, but our research at Interact Analysis shows that both the battery and the fuel cell system are falling in price substantially over the next 5-10 years. Not only will this bring the purchase price of an electrified powertrain much closer to parity with an internal combustion engine powertrain, but with the substantially lower running costs associated with electricity, the total cost of ownership will be lower – for battery electric systems, at least. 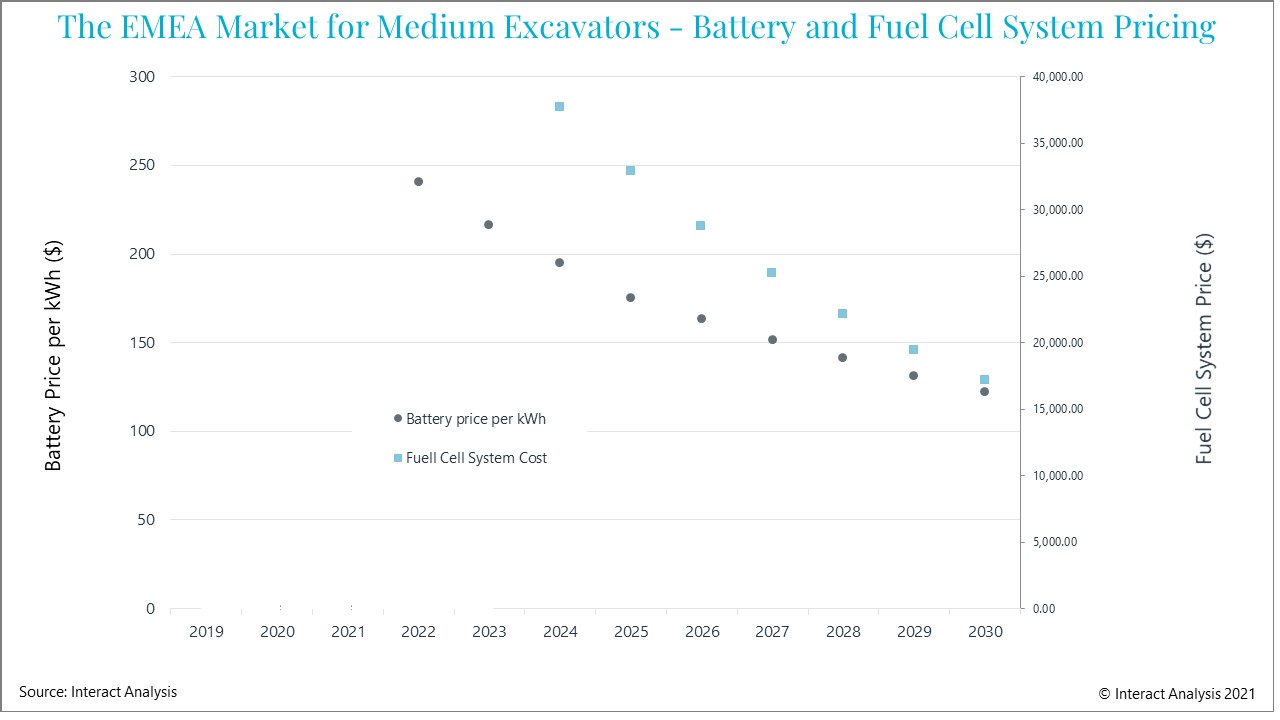 There is also the issue of where the hydrogen comes from. Whilst hydrogen is ‘clean’ locally – when it is consumed in an engine or a fuel cell – it is ‘dirty’ when it is produced, with the majority coming as a byproduct of the fossil fuel industry (brown hydrogen). It is possible to produce green hydrogen (hydrogen produced by the electrolysis of water where the whole process is powered by renewable electricity), but this is considerably more expensive than brown hydrogen and, as a result, is it practical to combust it in an engine compared with using it much more efficiently in a fuel cell?

Given all of the above, why are certain manufacturers even looking at this solution?

Cut Them Some Slack, Decarbonization is Hard!

Some applications and locations, particularly in off-highway, are just really difficult to operate in without traditional, energy dense fossil fuels. High-intensity duty cycles in remote locations are the most challenging to decarbonize – the energy requirements of a bulldozer, for example, are such that a battery electric version would be limited in terms of operational performance with current battery technology. If a hydrogen fuel cell version were used, there would be significant challenges with refueling it at a remote location without high-pressure storage facilities. In reality, certain applications will struggle to decarbonize through electrification and must look at alternatives.

What’s clear now is that the internal combustion engine industry is at the beginning of the end. Across passenger cars, trucks, buses and even off-highway vehicles, manufacturers are realizing that they need to decarbonize with some urgency. However, this realization comes with a cost: huge investment in new powertrain technologies, vehicles, and processes. Whilst larger manufacturers may be able to stomach this cost, others without deep pockets or significant exposure to investments in internal combustion engines may be looking for ways to make best use of the products that they already have.

It’s clear that hydrogen combustion engines make use of the traditional engine technology stack and supply chain, and easily slot into the service and maintenance offer of most manufacturers. This makes their use appealing, particularly as they can help to reduce carbon emissions while preserving investment, jobs, and supply chains. But there is a risk that this is short-sighted. Will governments or cities crack down on NOx emissions rendering the technology useless? Will investments and time spent developing hydrogen combustion delay focus on the electrification technologies that are so clearly the long-term solution? And is it just moving the pollution problem from ‘local’ to ‘somewhere else’?

If you build it, they will come

Another factor in pursing hydrogen combustion engines is the idea that it will drive more demand for hydrogen, bringing down the cost of production (a topic Interact Analysis has written about before). If more vehicles are in operation that need hydrogen, there will be greater incentive for producers of hydrogen to scale production and reduce costs, bringing the price of the fuel down. This will help support the use of not only hydrogen combustion engines, but also hydrogen fuel cells and a broader hydrogen economy. The work by JCB and Liebherr, for example, when viewed in the context of the hydrogen economy in the UK and Germany could make a lot of sense. An increase in hydrogen machines – combustion or fuel cell – could be all the impetus that is needed to kick-start a hydrogen economy.

Time is Ticking, But Time Will Tell

Are hydrogen combustion engines a smart solution to the problems of decarbonizing heavy-duty machinery, or a pointless dead-end that is being dressed up to play well ahead of COP26? It is a deliberately provocative question for which there is a necessarily messy answer: it depends on what you are trying to achieve.

If you are trying to decarbonize a heavily energy intensive application, cost considerations would make a hydrogen combustion engine a practical solution for end-users versus trying to persuade them to buy a battery electric or hydrogen fuel cell model. If your company is deeply invested in internal combustion solutions and has a finite R&D budget – or is reliant on an internal combustion-based supply chain – it makes sense to develop a hydrogen combustion engine as a path to decarbonization. If your business is operating in markets where an adoption of hydrogen machinery will help to drive the costs of hydrogen fuel down, then it probably makes sense to pursue hydrogen combustion.

So, for JCB and others, there is rationality to the decision; however, does that make it the right decision overall? There are several risks at play here. First, the cost of hydrogen is currently much higher than that of diesel or electricity. This isn’t mentioned in the ‘hype’ surrounding the product launches and will be key to end-user adoption – if there is no clear push to use the solution to decarbonize from legislators, then end-users are not going to pay more for the machine and the fuel. Second, if regulators decide to heavily penalize or ban NOx emissions, then this technology is not a practical solution – recent announcements from COP26 put several major countries on a path to do just that. Third, this is likely the best fit for very intensive applications in construction or agriculture. However, many of those sites are a long way from central locations – particularly transit corridors – and this makes the distribution of hydrogen and the storage of it onsite complex and expensive.

At Interact Analysis, our research shows that, whilst the technology clearly has the potential to reduce carbon emissions, the use of hydrogen combustion engines in heavy duty applications will be limited because of the challenges with machine and fuel price, the small number of suitable applications, and the shift toward battery and fuel cell solutions in many other applications.

To continue the conversation about low carbon solutions for heavy duty vehicles, get in touch with Alastair today: Alastair.Hayfield@InteractAnalysis.com 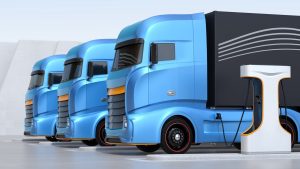 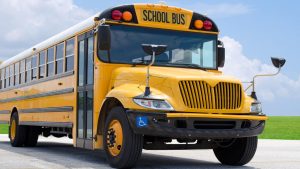 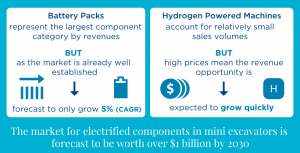 Electrified Off-Highway Components Market To Be Worth $25bn 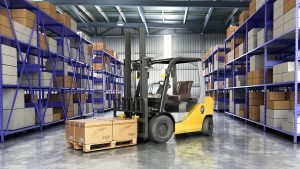