China is rapidly moving up the manufacturing value-chain, producing more sophisticated goods, and creating a skilled and higher-paid workforce in the process. What does this mean for the global manufacturers who are already well established in the country?

In May 2015, Chinese premier Li Kequiang introduced a major new economic strategy for the country: Made in China 2025. This strategy was developed as a response to a range of pressures that were reducing China’s competitiveness as a center for low cost manufacturing, including significant long-term growth in both wages and the costs associated with renting business premises; not to mention the increasing social pressures of maintaining an ageing population, a shrinking workforce and the uneven distribution of wealth.

In many respects, these problems are the problems that accompany economic success, and the main thrust of Made in China 2025 is to shift the country from being a mass-producer of cheap, labor-intensive low-quality goods such as clothing, produced by lower-skilled workers; to the manufacture and export of higher-value, mid-range products, made by a high skilled (and better-paid) workforce. Often such change has happened already. For example, China still maintains a strong position in the global export of textiles (a labor-intensive industry), but growth is slowing over the long term (See Fig.1). 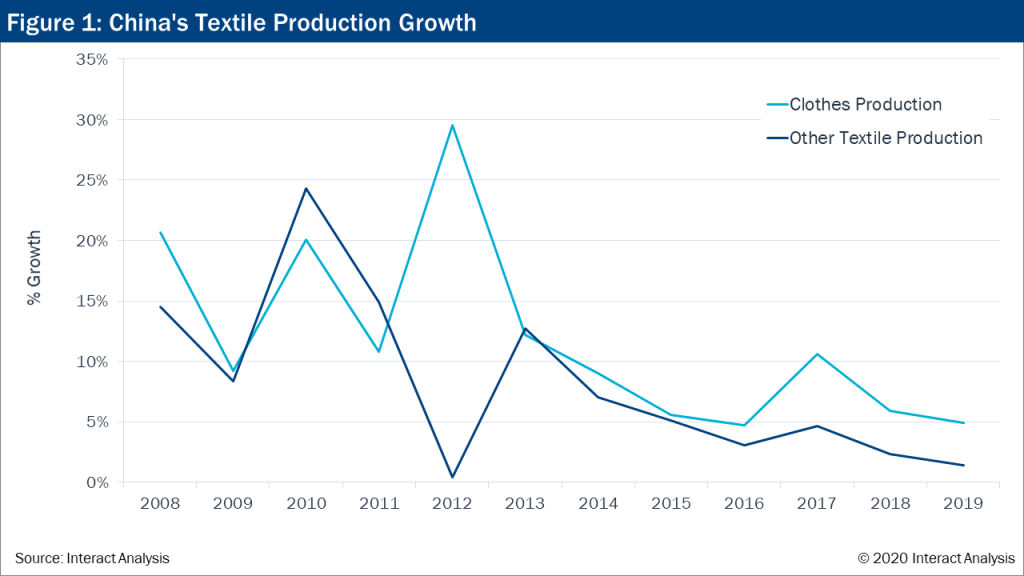 In particular, China has accelerated its production and export of higher-tech capital goods – machines and components used to make finished goods – in such fields as consumer electronics, aerospace and automotive (see Fig.2 and Fig.3 below). 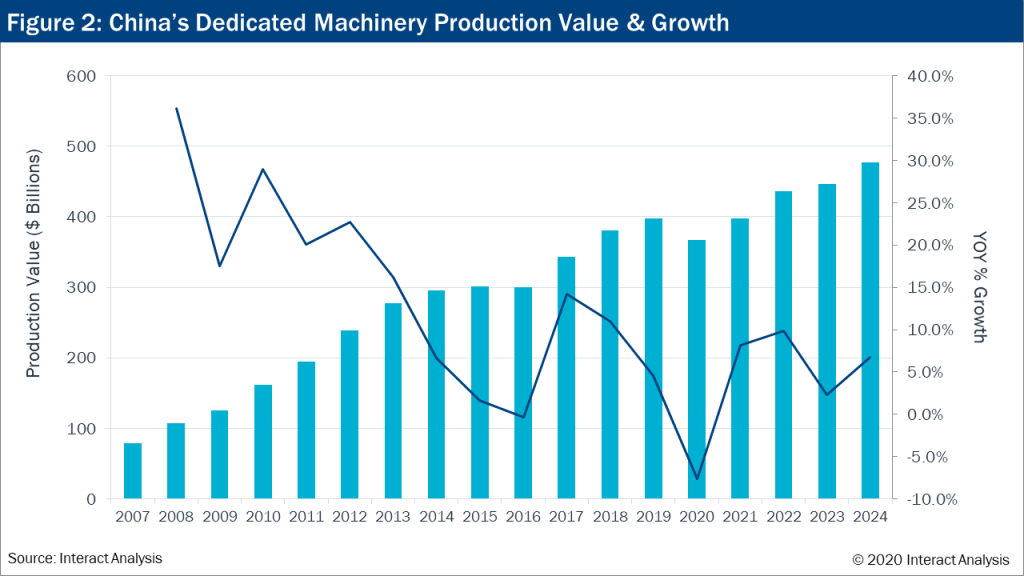 By 2024, year-on-year growth of dedicated manufacturing machinery production (a type of capital good) in China will be 6.74%. Fig.3 – this compares to industrial production which will have YoY growth of only 3.84% in the same year (see below). 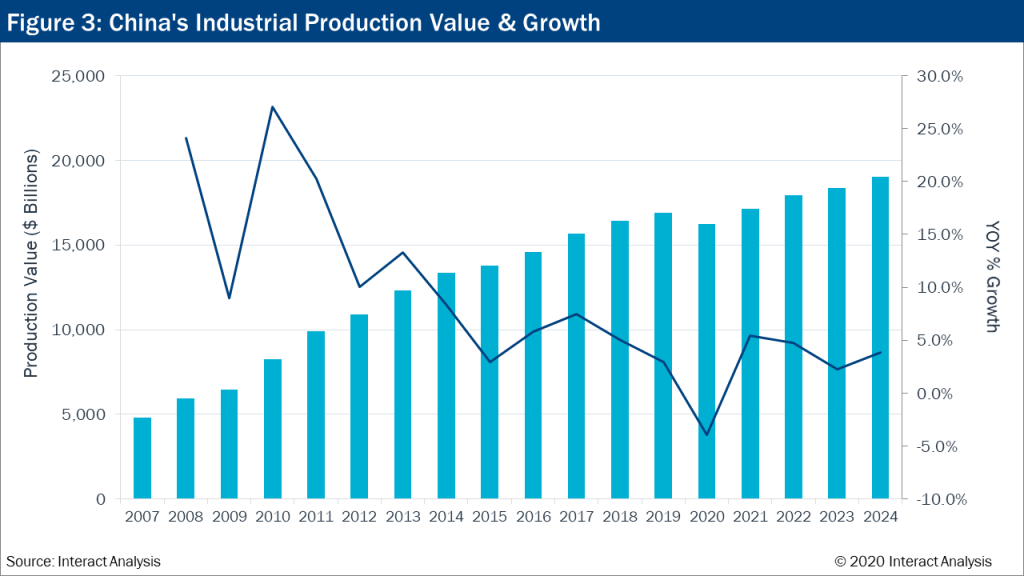 One thing is clear: China is no longer simply the low-wage workshop of the world.

Labor-intensive Manufacturing. Is India Really “The Next China”?

For the past 20 years, industry analysts have been asking themselves if India would become the next China. As a relatively poor country with a low-wage economy, India is at first glance in many ways what China used to be. Furthermore, India has a massive demographic advantage. By 2050, India will have the world’s largest population – 1.7 billion inhabitants – and its dependency ratio (the ratio of children and old people to working-age people) is predicted to be slightly under 50%, much the same as it is today. China, on the other hand, struggling with the consequences of its 1-child policy, will have a shrinking population, down from a high of 1.4 billion people to 1.3 billion by 2050, and an ageing population, with a dependency ratio of 70%. It has been suggested that, as children customarily care for elderly parents in China, there may come a point where the workforce is going to be have to be shored up by the recruitment of workers from other countries.

However, though India’s working population may be burgeoning, the country comes as a poor second to China in key areas. In the past 25 years, China’s economic growth has accelerated at a far faster pace than India’s. That growth has been driven by huge investment which has funded an infrastructure revolution of high-speed rail lines, roads, ports, airports, and new cities. China’s ability to move its manufactured products quickly and efficiently out on to world markets has resulted in the country’s metamorphosis into a manufacturing giant – the world’s workshop for the past 20 years, currently responsible for almost 50% of total global manufacturing output. India, by contrast, is streets behind in almost all areas of manufacturing (see Fig.4).

India has a notoriously poor infrastructure network, making it difficult to ship mass-manufactured goods from factories to ports. Add to this the fact that India invests about 30% of its GDP, compared with China’s 50%, and that manufacturing accounts for about 20% of the Indian economy, while in China it is 30%; and we see that India is very much a poor neighbor, and not such an attractive proposition for inward investment. All this could change, but it would require significant policy changes from the Indian government – well in advance of what is currently being done through the Make in India campaign. Such change does not currently appear to be on the horizon.

If lower-paid jobs are to head out of China, it currently looks more likely that they would go to countries in South-East Asia. Vietnam or Taiwan, for example. Over the past 30 years Vietnam has seen rapid economic growth, with GDP per capita increased by 2.7 times between 2002 and 2018, and the population reaching 97 million in 2018, up from 60 million in 1986. The Vietnamese government has recently announced an increase in the minimum wage, but wages still remain comparatively low. While only 20% of the country’s national roads are properly surfaced, the will to significantly upgrade infrastructure is there. The government recently approved a plan to build a 1,372km north-south highway by 2030 at an estimated cost of $14bn.

COVID-19 and International Tensions: New and Significant Factors in the Equation?

For years, China has been a magnet to investors because of its infrastructure, its relatively low rates of pay, and its skilled and dependable workforce. And there is also the versatility of its manufacturing: “China is still a very attractive total supply chain solution,” said How Jit Lim, a managing director with consulting firm Alvarez & Marsal. “There are very few countries in the world where you can find almost everything you need to build something.” This may ultimately prove to be a disadvantage for China, as industrial strategists have seen with COVID-19 and rising geo-political tensions that putting all your eggs in one basket – i.e. having entire supply chains based in China – can be problematic in the event of global shocks. In particular, the pandemic which shut down vast swathes of the Chinese manufacturing base; but also the US-Sino trade wars of recent years. The likelihood, however, is that while such crises may cause a limited degree of diversification – that is of moving production from China to other countries that would not otherwise have moved – the wheels of manufacturing in China are too strongly-established and too well lubricated for manufacturers to simply up sticks because of the problems caused by temporary shocks.

That said, other economies such as India and those in South-East Asia are lying in wait to see what the fall-out is from the pandemic, the Hong Kong dilemma, and the China-US trade war; a conflict, ironically, at least partially fueled by China’s successful upgrading of itself to be a higher-value producer and exporting goods to the US at a rate that put US companies out of business. 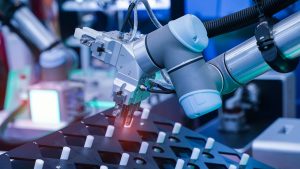 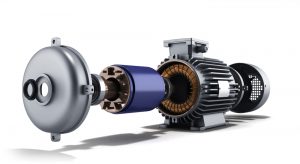 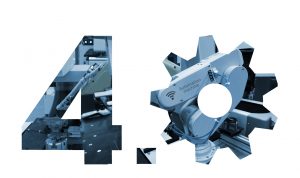