Auto Industry Must Use New Simulation Tools, Business Models and Be Faster. Or Die.

As the auto industry enters a new decade, any sense of optimism must be tempered with the cold reality that some companies may not survive to see the next decade. With almost perfect timing, VW’s CEO – Herbert Diess – this week outlined precisely the problems facing every major OEM by likening their situation to the fate that befell Nokia:

The automotive industry is going through an unprecedented period of change. Three mega-trends – electrification, autonomy and mobility – are forcing the entire automotive community from raw material suppliers to aftermarket service centers to re-think their strategies, products and future.

The push from legislators and activists for low and zero emission vehicles is forcing OEMs and suppliers away from internal combustion engine (ICE) vehicles to more efficient hybrid and electric powertrains to reduce or remove GHG emissions. This shift is requiring a vast investment in new technologies, vehicle designs, production facilities and more.

Vehicle autonomy – the use of technologies to automate some or all driving functions – is being pushed simultaneously by the need to differentiate cars with new features to attract customers and the need to improve vehicle safety by augmenting human drivers with safety features or removing the need for human drivers altogether. As with vehicle electrification, this trend is requiring a vast investment in new technologies and also raising fundamental questions about vehicle safety and liability.

The final mega-trend – mobility – represents perhaps the most fundamental structural change to the automotive market. Traditionally, the automotive market has been driven by a basic vehicle ownership and vehicle replacement model. However, with rapid increases in connectivity technology, vehicle automation, the increasing costs of motoring (particularly for the youngest drivers) and, globally, several billion ‘non-drivers’, there is a strong urge to offer personal mobility as a service through car or ride sharing. Rather than consumers ‘owning’ cars, they will pay to access a mobility service which provides access to vehicles or rides on demand. This has the potential to lower mobility costs for users and/or ‘open up’ mobility to those who cannot drive.

As the auto industry adapts to new technologies and business models, much of the value in a car moves away from the vehicle manufacturers. For example, electric motors, batteries, sensors, processors, software, etc. have not and, in many instances, are not the core competency of OEMs.

In some regards auto manufacturers face a stark choice – become little more than low margin assembler/integrators of vehicles (there’s an argument that they already are) or embark upon becoming mobility platform providers, eschewing the manufacturing parts of their businesses to, instead, focus on offering more profitable services such as mobility-on-demand.

Manufacturing cars is, for many OEMs, already a low or zero profit business. OEMs make most profit from a small number of very successful body-styles or models – the current fad for SUVs or the F150 for Ford or the Golf for VW. Other significant sources or profit come from vehicle financing or aftermarket service/sales – back in 2015 GM President Dan Ammann described GM’s aftersales business as a “huge profit driver” with contribution measured in billions and margins ranging from 30 to 40%. Furthermore, VW has recently renegotiated its dealership retail frameworks to include revenue sharing but also help its dealers remain profitable when selling electric vehicles and incentivizing them to sell software upgrades to connected vehicles.

But OEMs face major pressure on these sources of profit from competition and crushing investments?

An influx of new competitors has entered the market in recent years. Automotive is no longer just ‘heavy metal’, most of the value in a modern car is now electrical and the software used to control the functionality of the vehicles is amongst the most complex ever developed by humans. This step-change in design and functionality has attracted new market entrants from the ‘high tech’ industries to pursue opportunities in automotive. Many of these new entrants are start-ups who live by the mantra of ‘fail fast’ and are not constrained by legacy process, costly manufacturing facilities or shareholder oversight.

The investment to bring about zero emission, autonomous and shared mobility could well represent the single greatest capital expenditure the automotive market has ever seen. For example, VW has invested over $90 billion in bringing about mass production scale for electric vehicles, GM Cruise, a self-driving car service, has received $1.15bn in funding recently and $2.75bn from Honda and $2.25bn from Softbank previously, Ford Motor Co. will significantly increase its planned investments in electric vehicles to $11 billion by 2022, BMW and Daimler, two of the biggest German automakers, are partnering and investing $1 billion into an effort to create all-electric on-demand autonomous mobility.

With such an influx of capital, surely the automotive market is expanding and creating a wealth of new jobs and facilities? Not so – GM is closing production plants, Ford will close six European plants as a part of global downsizing, Fiat Chrysler is to cut nearly 1,400 jobs at its Illinois plant, PSA, Dongfeng to drop 2 China plants, halve workforce, and FCA and PSA are to merge to reduce costs (and likely close facilities).

The hard fact remains that the automotive industry has chronic production overcapacity, fierce competition and is being tasked with doing more new things whilst supporting existing, flat and declining businesses. In this scenario the only way to ‘make both ends meet’ is to find new tools and processes that allow operations to be conducted more quickly and less expensively.

To compete with more nimble start-ups and to perhaps tip the balance toward themselves, automotive OEMs can make use of sophisticated design and simulation tools to enhance their speed of design and also regain some of the advantage.

Simulation is the Name, Efficiency is the Game

In its recently published Automotive Design, Test and Simulation Solutions report, Interact Analysis estimates that the global market for Finite Element Analysis (FEA), Computational Fluid Dynamics (CFD) and Multibody Dynamics (MBD) was worth $1.7bn on 2018 and will be worth an estimated $2.5 billion by 2023 (see figure 1). 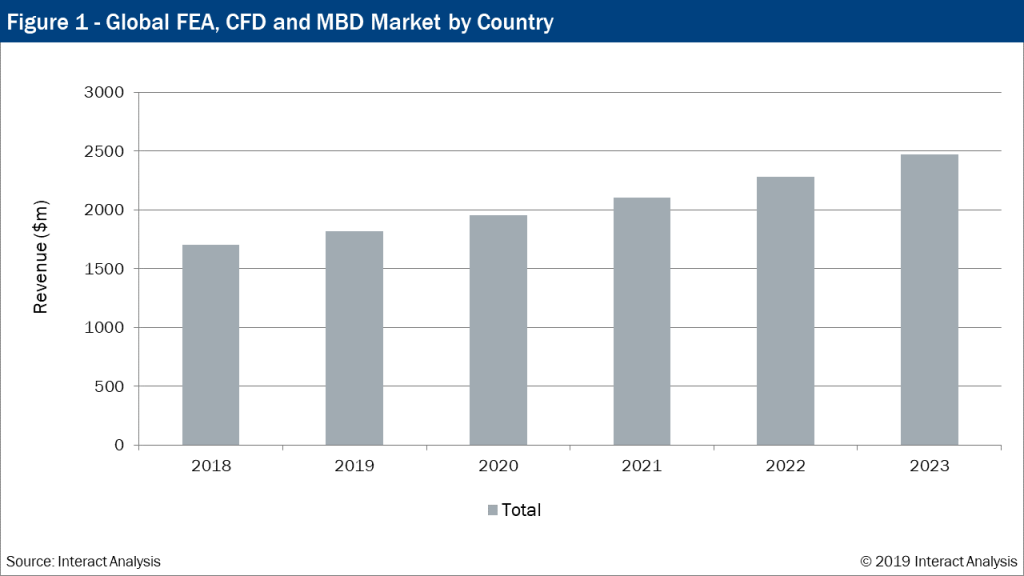 Interact Analysis also forecasts that the global market for ADAS and automation simulation software – advanced tools used to develop self-driving cars – will grow strongly over the next 5 years, reaching nearly $700 million by 2023 as automakers and start-ups develop the next generation of highly automated vehicles (see figure 2). 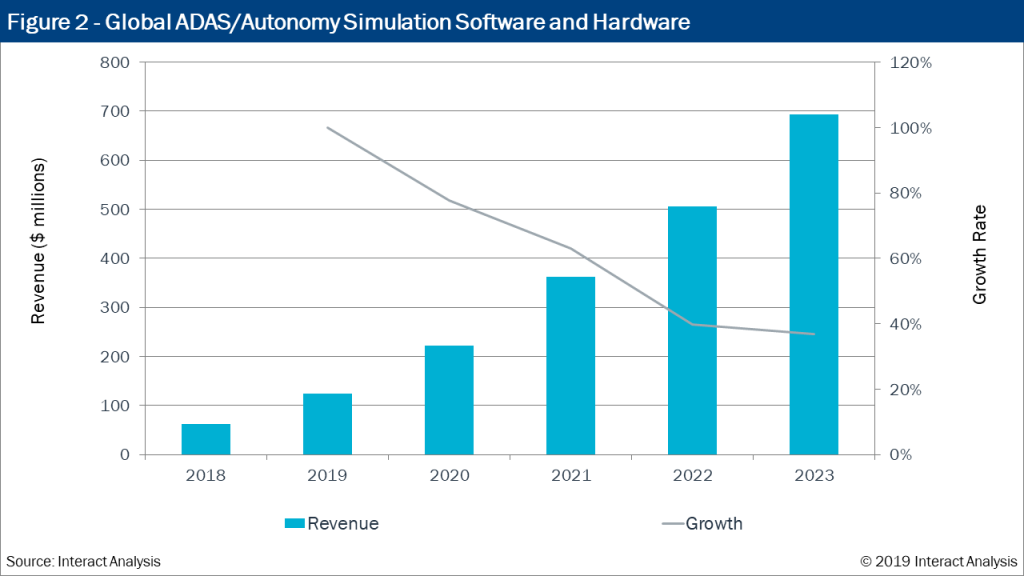 This is the ‘newest’ product category considered in this report. Whilst simulation software like FEA or CFD has been in use for decades, the requirements of simulating ADAS and autonomous features and vehicles requires more specific and more sophisticated software. This software category represents one of the most significant growth opportunities over the next 5 years.

The market is really being driven at the moment by three main factors:

There are a number of examples of automakers and suppliers adopting simulation to reduce costs or improve time to market, all of which can be read about in more detail in the recent Interact Analysis study:

VI-Grade/Saginomiya and Volvo – “It took Volvo seven years from the time it started development on its scalable product architecture until the first SPA models reached the market in 2015. With the help of its 3-million-euro chassis simulator, Volvo says it would now be able to do the same project in half that time.”

IPG Automotive and PSA – “For one, we are obviously saving time or gaining time for more extensive tests. For the other, the answer, clearly, is that we are saving a lot of money with it. In eight projects, we cut the number of prototypes by a total of about 30%, which in this specific case corresponds to several hundred thousand euros.”

Dassault Systemes and Tesla – “While there was plenty of opportunity for large-scale process improvement to optimize its development cycle, the Tesla simulation team got significant mileage out of a relatively small change to its finite element analysis (FEA) model preparation procedures. By automating how it handles the connector portion of its CAE model, the simulation team was able to shave days off its design process—and redirect that time to more in-depth analysis studies.”

Mathworks and Volvo CE – “The simulations that we run with Simulink and Simscape let us evaluate various design concepts and parameter values, reducing the risk of redesign later in the development cycle,” says Lee. “Once we identify an optimal design via simulation, we can build it. We anticipate a 30–50% reduction in prototype builds as a result.”

National Instruments and Hyundai Kefico – “For the first 17 CP-Testers, we achieved a 45 percent better project ROI and saved over $1M compared to our previous solution.”

The approach chosen will depend, in part, on the current design/simulation solution that an OEM/supplier uses (Siemens, Dassault, ANSYS, etc.) and also the design philosophy of the OEM/supplier. Some OEMs/suppliers are more progressive – particularly the start-ups – and will have more appetite to ‘abandon’ traditional design approaches and embrace the role of simulation. Their current design/simulation solution provider may or may not be able to accommodate this and this could, in time, start to change the competitive landscape. Other OEMs/suppliers may be reluctant to give up traditional design and testing methods – it has been observed during the research for this report that, for some engineers at least, it is important to verify and test design features in the real world to really understand how they perform. For example, vehicle dynamics – how a car drives – is often considered a signature feature of most OEMs. There is a strong desire to test this in the ‘real world’ and to really understand how a vehicle will perform for drivers. This requirement from engineers will likely mean that, to some extent, real world testing is always used.

In the future, simulation and disruptive technologies and relationships may herald a new era for the automotive industry. A great example of this is the recent partnership between Siemens and VinFast:

To put this achievement into context, here are details of investments by other OEMs into new vehicle platforms and production facilities:

As can be seen, the automotive industry typically takes years to bring production facilities online and typically invests significantly more than that spent by VinFast in getting vehicles into production.

Clearly, VinFast needs to ‘prove’ that it can actually scale production and manufacture its vehicles on time, to a required standard, and support those vehicles once in market – no small feat on any front. However, what they have done is show, worryingly for the large OEMs, that you don’t have to invest a lot of time or money to get vehicles to market. In a market with over-capacity and a number of start-ups challenging the established vendors, this case study should make OEMs sit up and pay attention.

Interact Analysis would make a number of observations based on its highly-detailed research on the automotive design, test and simulation market:

Auto Industry Must Use New Simulation Tools, Business Models and Be Faster. Or Die. was last modified: January 27th, 2020 by Alastair Hayfield