In a new report, Interact Analysis provides an autonomous truck forecast that highlights the beginning of a long and irreversible trend toward automation within the truck market. Legislation and societal acceptance provide market headwinds and competitive pressure, logistics efficiency and safety provide significant forward momentum. Platooning, an ‘efficiency’ automation provides the basis for initial market growth, particularly in the US and Western Europe. However, as technology is proven, and effective legislation enacted, higher levels of automation that lessen the need for drivers will be adopted. These higher levels of automation that bring the principles of factory automation – electrification, constant ‘product’ flow and autonomy – to the road, will gain traction after 2030 and revolutionise the truck and logistics market. The US is forecast to be the early market leader as it contains both an active start-up community trialling the technology and a positive legislative environment enabling trials. However, China is aggressively pursuing its own, domestically sourced technologies and has several start-ups and established OEMs investigating higher levels of automation. If Chinese legislators pursue a similar approach with autonomy as they did (and are doing) with electric vehicles, then China stands to be the dominant market for truck automation over the next 20 years. 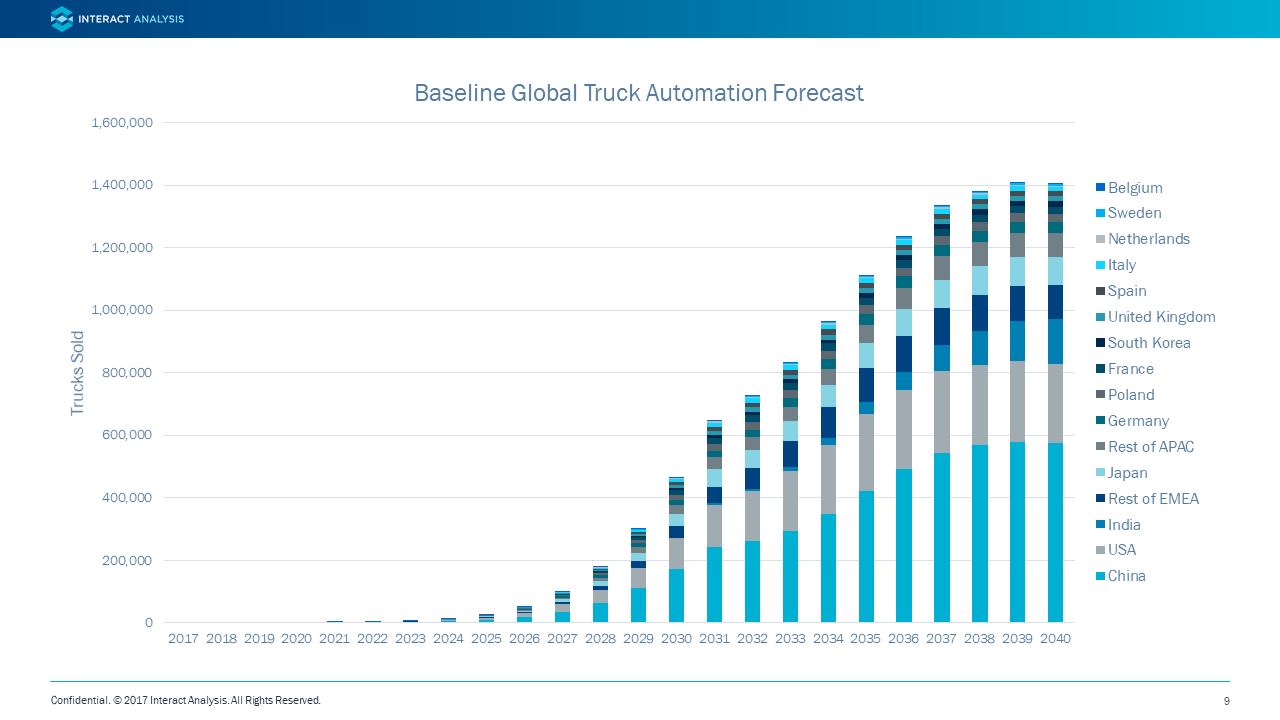 The switch to automated trucks – using platooning or higher levels of automation – will require a significant change in the sales process and the business model associated with truck ownership. The sales process will become much more consultative in the future as truck operators will need to engage in route and operational planning to understand where to use platooning and autonomy for maximum benefit. It isn’t clear yet who will provide this consultation – the OEM, the dealership or a third-party. Fleet operators that use telematics will have an advantage as the vehicle data they possess will be an invaluable aid in planning where and when automation events can occur. 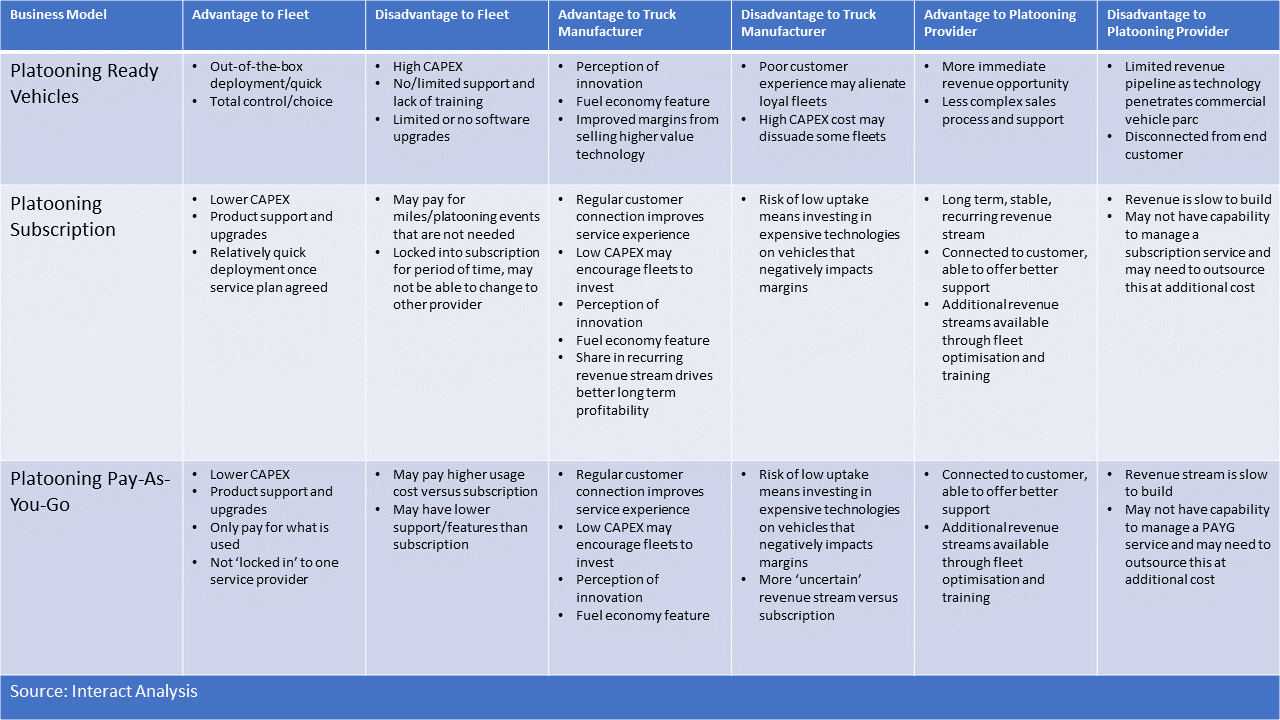 A subscription-based model seems most beneficial to all parts of the value chain. It creates the best long-term value opportunity for truck manufacturers and platooning providers and offers, arguably, the best level of service/engagement to fleet operators. It is very unlikely that most of the market will buy ‘platooning ready’ vehicles and operate the service themselves since the complexity of planning platooning activity would typically require specialist support that fleets do not themselves possess. For a subscription model key points that still need to be resolved are how the service is billed – a flat-rate per month or a per distance fee – and how the revenue is distributed along the value chain, i.e. who manages billing, how are subscription fees split, etc.

What a truck is used for plays a key factor in how it will be automated and the uptake of a particular technology. For example, platooning only really makes sense where trucks can be operated for long periods of time at higher speeds. This means that mid- to long-haul trucks that have a duty cycle that requires a high percentage of highway miles represent the best opportunity for platooning. For L4 automation, where the driver can be replaced, the simplest deployment for a technical perspective is highway driving. This means that L4 automation will, again, gain traction first in highway applications. However, since L4 automation can be effective in lower speed domains, it will also be used in applications – such as urban delivery – where platooning is ineffective. Vocational vehicles – those with a particular function like fire trucks – will likely be the most resistant to automation in the mid-to-long term. Since the driver is required to perform a task at their destination, there is less pressure to replace them. That said, point-to-point vocational vehicles such as dump trucks, mixer trucks and logging trucks may be automated more quickly. 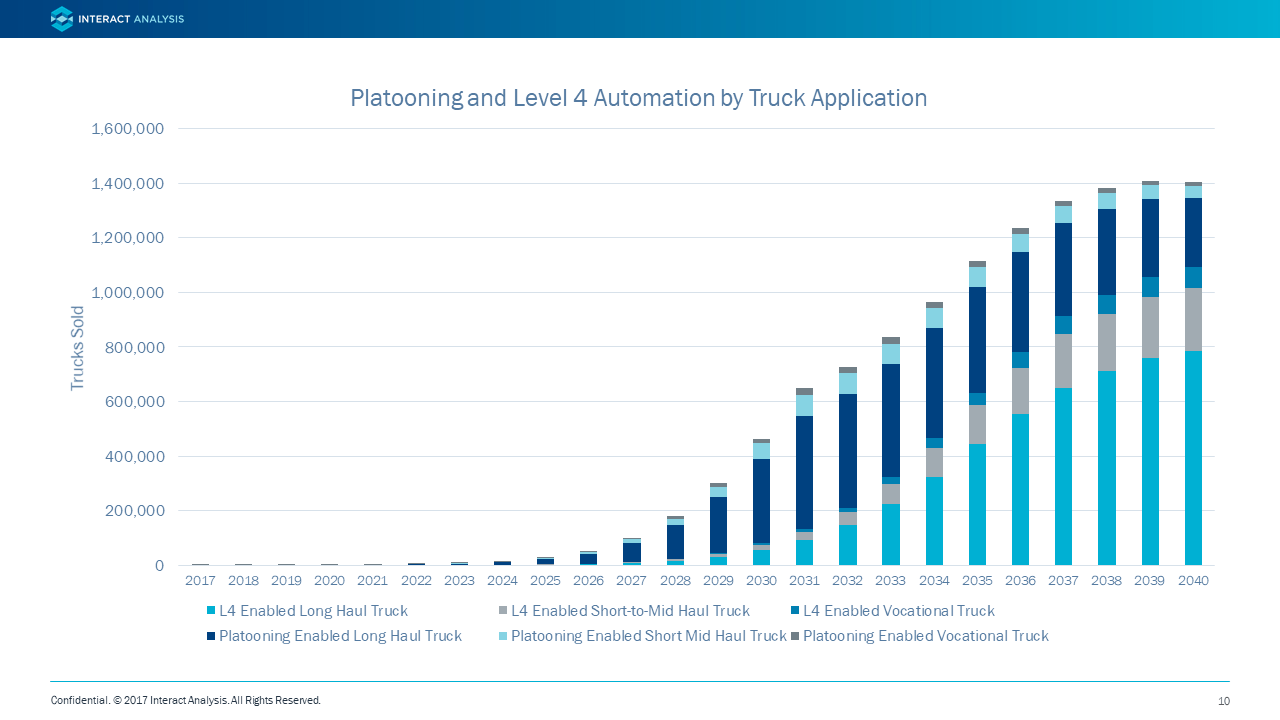 Another important factor impacting the uptake of automation technology in commercial vehicles is the attitude of different players within the freight market itself.

The area and conditions in which commercial vehicles are driven will be a strong determinant of the level of automation used and the forecast deployment of the technology. Highway driving in clear and dry conditions, where vehicles travel in one direction in fixed lanes is a relatively simple scenario for automated vehicles to handle. Poor visibility caused by fog or snow will make it harder for the first generation of vehicles to travel, limiting their use in more extreme climates. Interact Analysis believes that automated truck technologies will gain traction first in highway applications, particularly in temperate climate zones that do not regularly see extreme weather conditions.

Cities provide much more complex environments to navigate, with people, varying speed limits and greater traffic density; making it much harder to operate an autonomous truck. It is Interact Analysis’ assumption that greater adoption in cities will come in the second or third generation of automated trucks post 2030.

The one area that may see greater adoption of higher level automation in the short- to mid-term is circumscribed areas (defined, off-highway areas) such as ports, depots, freight yards or similar. These sites have more limited vehicle and pedestrian traffic and vehicles that move on well defined routes. Several start-ups and suppliers are actively investigating the use of automated technologies in these environments to improve the efficiency with which vehicles are moved and improve the safety of vehicles: collisions with other vehicles and loading bays can costs tens of thousands of dollars per month to fleet operators and reducing this expense would impact the bottom line significantly.

Legislation, location of truck and technology companies and the structure of the logistics and freight market all contribute to the likely adoption of platooning and higher levels of automation. The US is forecast to be the early adopter as it has both an active community of companies trialling the technology and a reasonably pro-active legislative environment. China is forecast to be dominant in the long-run given the size of its truck market and the move toward developing its own advanced industries. Europe will be slower to adopt platooning and autonomy, largely because its domestic OEMs are being relatively slow to trial and use the technology. India has the potential to be a sizeable market – because of the overall size of its truck market – but it must develop a positive legislative environment and develop core infrastructure such as better roads and high-bandwidth cellular networks. 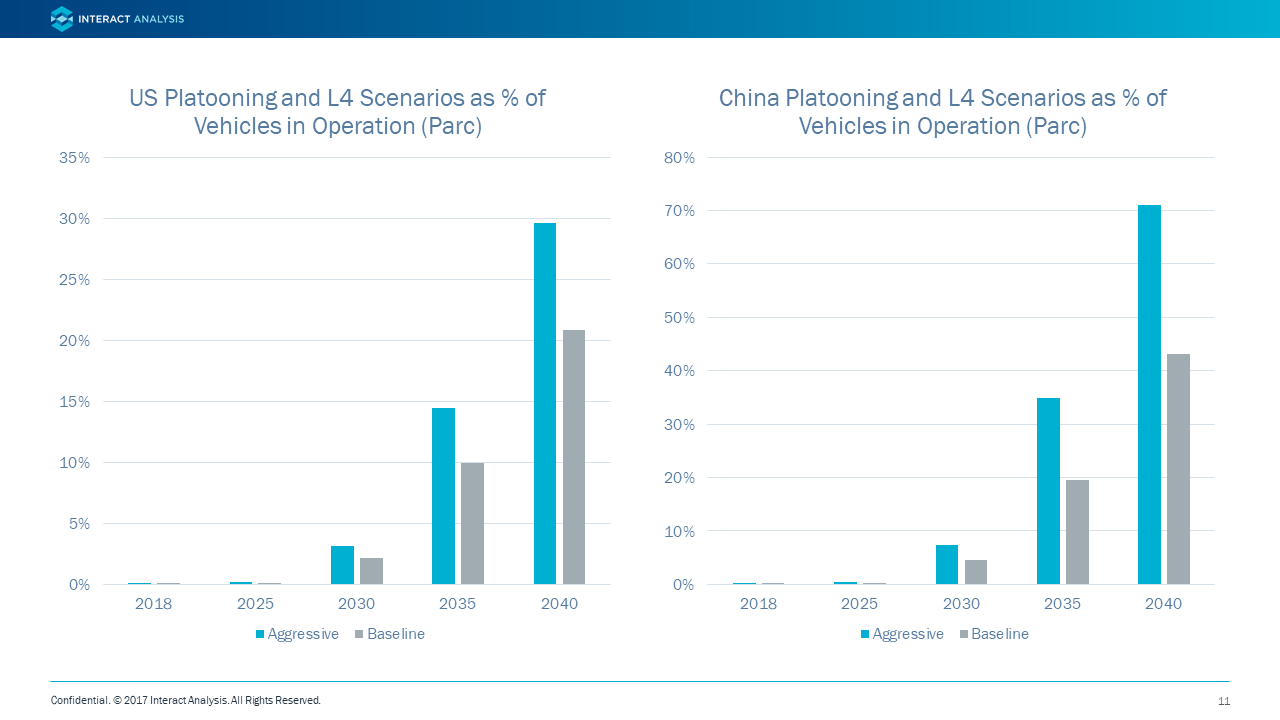 Platooning as an Efficiency Technology

In many ways, platooning can be thought of as an efficiency technology, not an automation technology. It requires little in the way of automation (a driver is still present to assist and instigate a platooning event) and it’s primarily designed to save fuel much like driver training, aerodynamics (fairings or similar) or tire pressure monitoring systems are. This means that, realistically, when fleets assess their next generation of vehicles, they will consider where best to invest their resources in saving fuel. Aerodynamics, for example, is relatively low-cost route to improving fuel economy and, as a result, a more complex solution such as platooning that requires training and a change in behaviour may face a challenge in terms of deployment.

One other concern associated with the automation of trucks is that it will lead to massive unemployment. In the next 5-10 years Interact Analysis forecasts that there will be very little impact on driver employment for several reasons:

As the industry moves beyond 2030, it is likely that a growing number of trucks will be operated without drivers. However, this still won’t lead to mass unemployment of drivers. Firstly, many vehicles are driven by someone who is not a driver by employment – think of utility vehicles or emergency vehicles. Even if they are not driving the vehicle, a person onboard is still employed for their primary role. In fact, journey time will likely be used to increase productivity for these individuals. Secondly, there are new roles emerging – such as teleoperator – that will likely support some driver roles. Rather than a cliff-edge, Interact Analysis believes there will be a gradual reduction in employment within the trucking industry.

Within its autonomous truck forecast, Interact Analysis has identified several opportunities for revenue growth associated with the move toward automation in commercial vehicles:

To request a copy of the report “Autonomous Trucks 2018” please email info@interactanalysis.com.