Founded in 1996, AutoStore is a Norwegian warehouse automation vendor specialising in ultra-high density storage systems. Ultra-high density storage systems use a swarm of robots which traverse the top of a three dimensional structure made up of totes. As an order comes in, the robots ‘dig’ out, or retrieve, the correct tote and carry it to the edge of the grid where a human worker picks the correct number of items.

AutoStore operates by licensing its technology to well-known integrators such as Swisslog, Dematic and Element Logic. To date, AutoStore has deployed 20,000 robots at 600 sites across 35 countries. This is up from just 130 installations in December 2016 and 350 in June 2019. 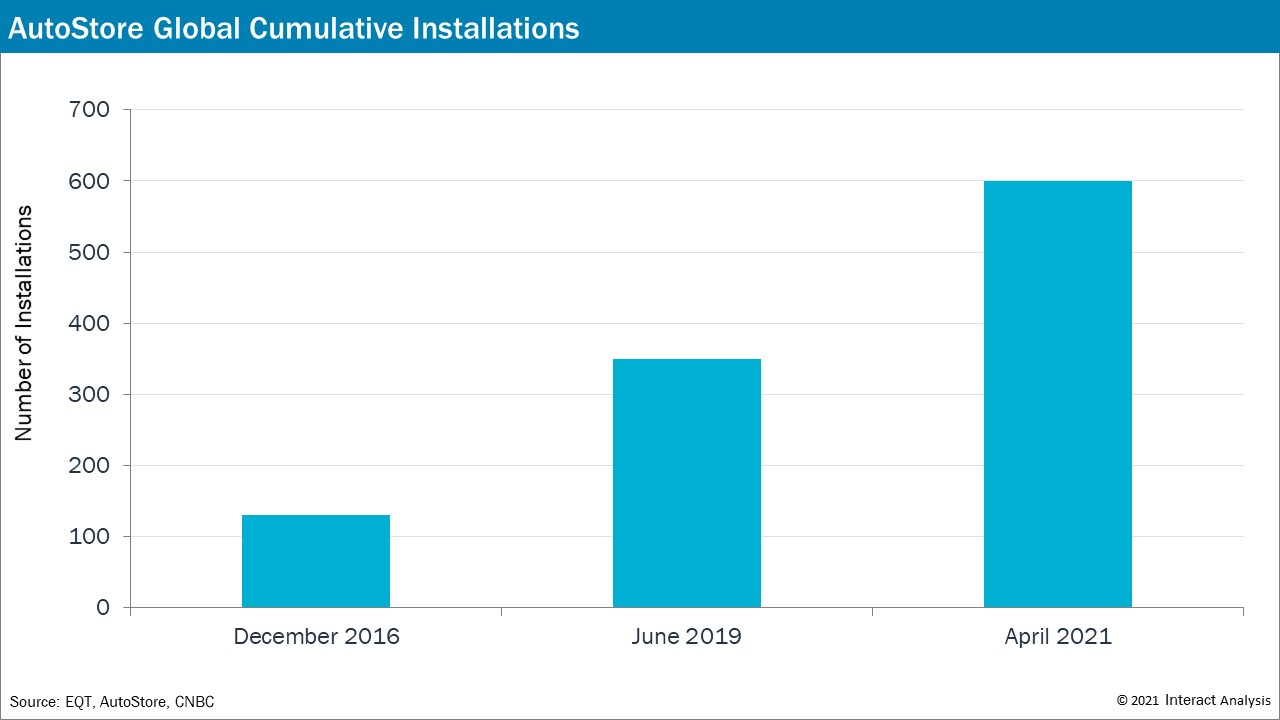 A series of acquisitions in the market

In 2016, EQT Partners acquired AutoStore with a valuation of €500m (~$594m) representing an EBITDA multiple of 18.8x, according to Unquote. AutoStore’s revenues grew from approximately $60 million (NOK 240m) to just under $200 million between 2016 and 2019 representing a CAGR of just under 50%, well above the warehouse automation industry average of 12%.

In June 2019, Thomas H. Lee (THL) acquired AutoStore, valuing the company at €1.6b (~$1.9b). AutoStore’s 2019 EBITDA was $108m resulting in a EBITDA multiple of 17.6x. Along with AutoStore, THL acquired a number of other warehouse automation vendors including Material Handling Systems (which we discuss in depth here) and Fortna.

Recently, Japanese tech conglomerate Softbank acquired a 40% stake in AutoStore for $2.8b, valuing it overall at $7.7b. Assuming a 50% revenue growth rate from 2019 and a 2020 EBITDA margin of 55% (AutoStore’s EBITDA margin in 2019), this would result in an EBITDA multiple of 48x when comparing 2020 EBITDA with the $7.7b valuation. This begs the question: Why has AutoStore’s valuation skyrocketed in recent years? 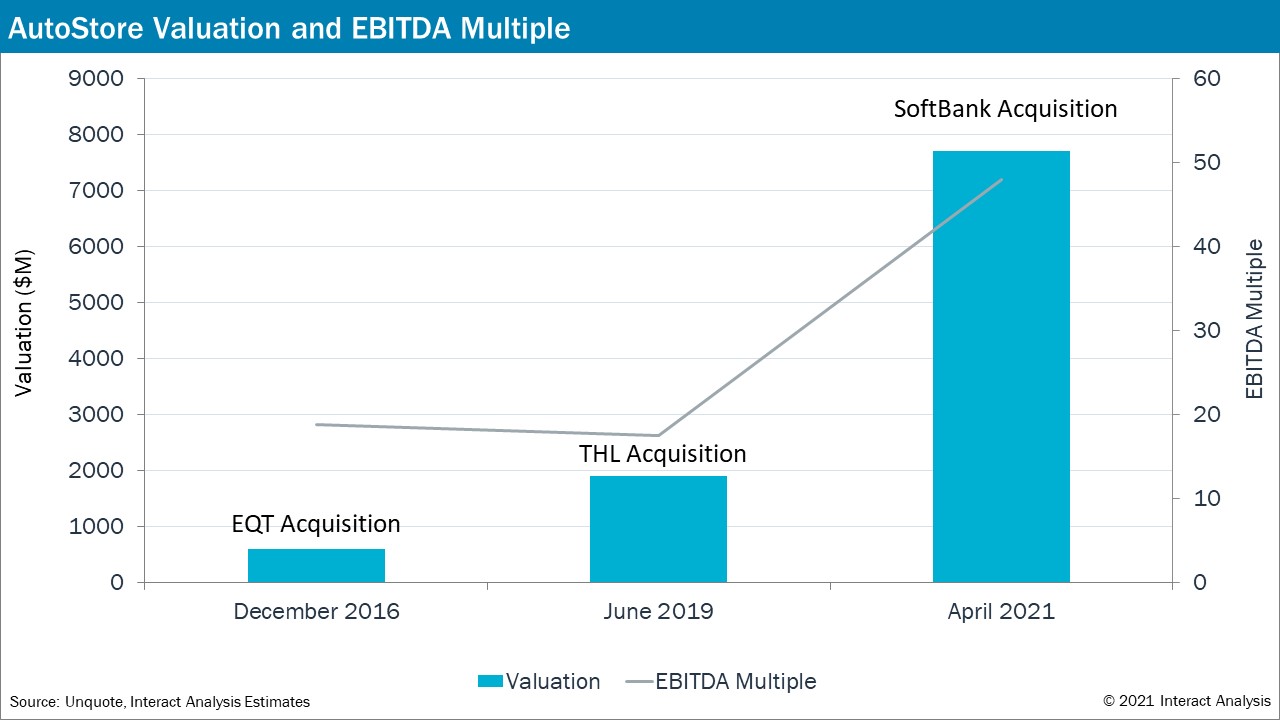 In recent years, AutoStore has announced several developments to its system including both hardware and software upgrades. Most notably the new Black Line robots, which joined the Red Line robots in AutoStore’s portfolio. Black Line robots can handle larger bins with better battery management and regenerative braking, eliminating the need for downtime whilst charging. In addition to the Black Line, there have been several software upgrades to the system such as the ability to store finished orders within the grid system alongside inventory. The resulting hardware and software upgrades have improved the presentation rate from 450 to 600 presentations / hour.

The consumer shift towards online retail during the pandemic has highlighted many of the inefficiencies that currently exist within today’s logistics systems. Many retailers’ online strategies moved ahead by 5 years in the space of a few months. To remain profitable, retailers and grocers alike are looking towards automation to help curb costs and provide the flexibility needed to meet higher than expected growth in eCommerce. You can read more about our pre- and post-COVID warehouse automation forecasts here.

SoftBank has stakes in several companies which will likely benefit from having a closer relationship with AutoStore. Most notable is Coupang which has been dubbed the Amazon of South Korea. Coupang’s recent IPO was a huge success and it’s likely that much of the funds will be used to expand its logistics network across South Korea and potentially even internationally. SoftBank also owns a stake in FlipKart, Tokopedia, GoPuff and ShipBob, all of which are potential customers for AutoStore.

To continue the conversation about the rapidly evolving eCommerce and micro-fulfilment markets, get in touch with Rueben direct on Rueben.Scriven@InteractAnalysis.com