To date, the European and North American battery electric truck markets have been dominated by start-ups and new brands such as Chanje and StreetScooter as well as light duty truck OEMs such as Nissan and Renault.

In 2018, the market saw several other incumbent truck OEMs join the race towards electrification for the first time. Volvo announced it would be electrifying its FE and FL truck series, DAF partnered with VDL Groep and Cummins respectively to electrify its CF and LF trucks and Daimler’s US brand, Freightliner, released the eCascadia – an electric version of the most popular long haul truck in North America – and the eM2. Significant investments were also announced with Daimler and Volkswagen allocating $3.2 and $1.7 billion, respectively, in electric truck and bus R&D.

Despite the positive headlines, the global battery electric truck market contracted by 12% in 2018 owing to a decrease in demand from China. This was primarily due to a subsidy reduction of RMB 75,000 ($11,000) although the tit-for-tat trade war with the US and the looming threat of a Chinese economic slowdown may have also negatively influenced the market. Excluding China, however, the global battery electric truck market grew by a strong 63%. 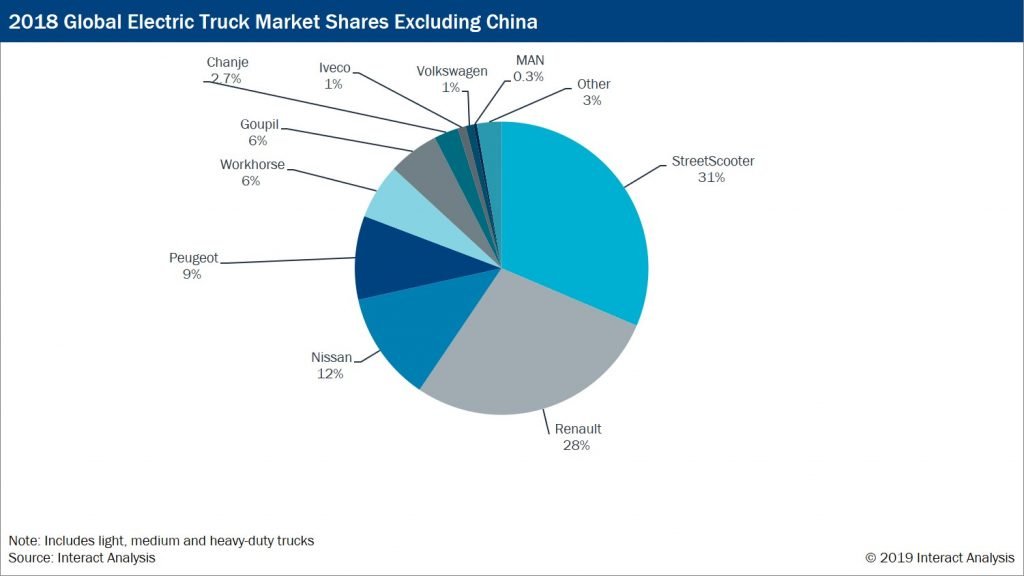 Excluding Chinese OEMs, StreetScooter remained the market leader while MAN Truck and Bus and Volkswagen entered the market for the first time with the TGE van and eCrafter, respectively. In addition, Nissan received over 7000 orders thanks to the updated e-nv200 with its 40 kWh battery pack, however, deliveries only began in May resulting in a large backlog. As such, Nissan’s market share for 2018 was significantly lower compared to 2017 and 2019 is set to be a record year for Nissan as it looks to clear its backlog.

We expect that the incumbent truck OEMs will begin to acquire significant market share in the medium- and heavy-duty markets by 2020/21 following their initial tests with customers. Until then, however, smaller electric truck OEMs such as Orange EV and Emoss will continue to dominate these segments albeit with low volumes.

Several new truck models will hit the market in 2019 after being announced last year and, in line with current trends, we expect several new electric trucks to be announced such as the medium-duty electric truck displayed by Peterbilt at this year’s CES in Las Vegas 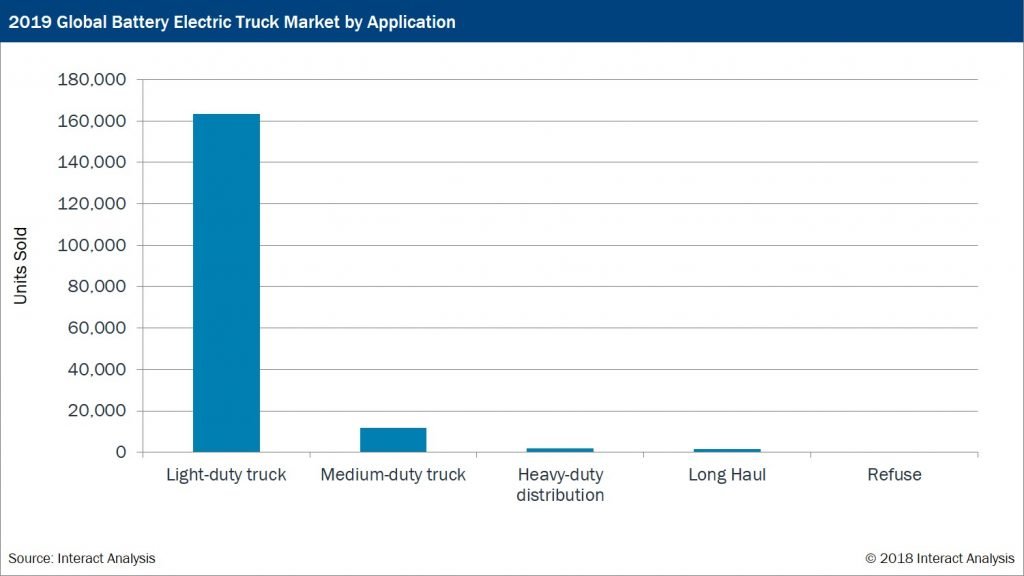 In 2019, several low emission zones will be implemented across the globe ranging from Euro 3 to Euro 6 emission restrictions (or equivalent). The majority will come from the UK with several others being implemented in China, The Netherlands and The Czech Republic. 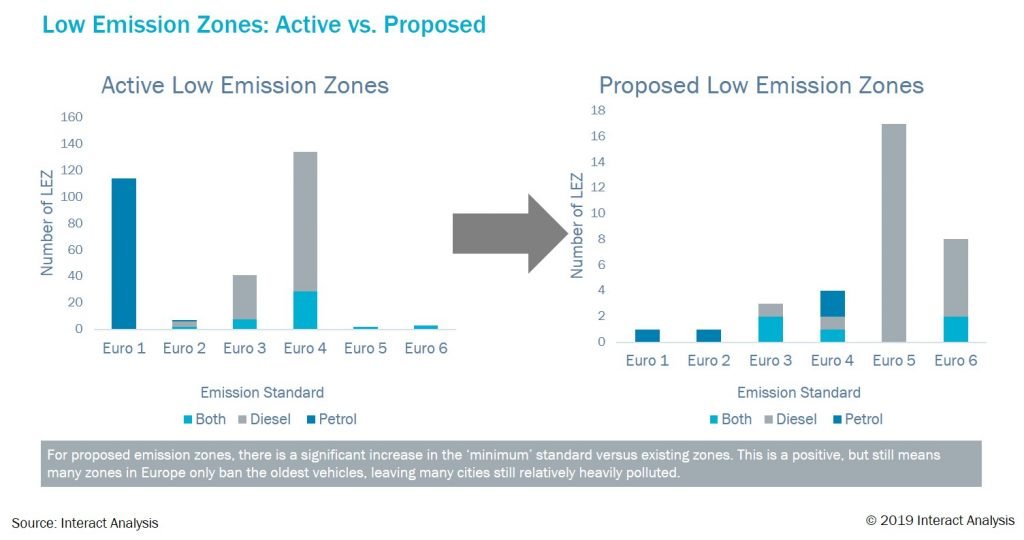 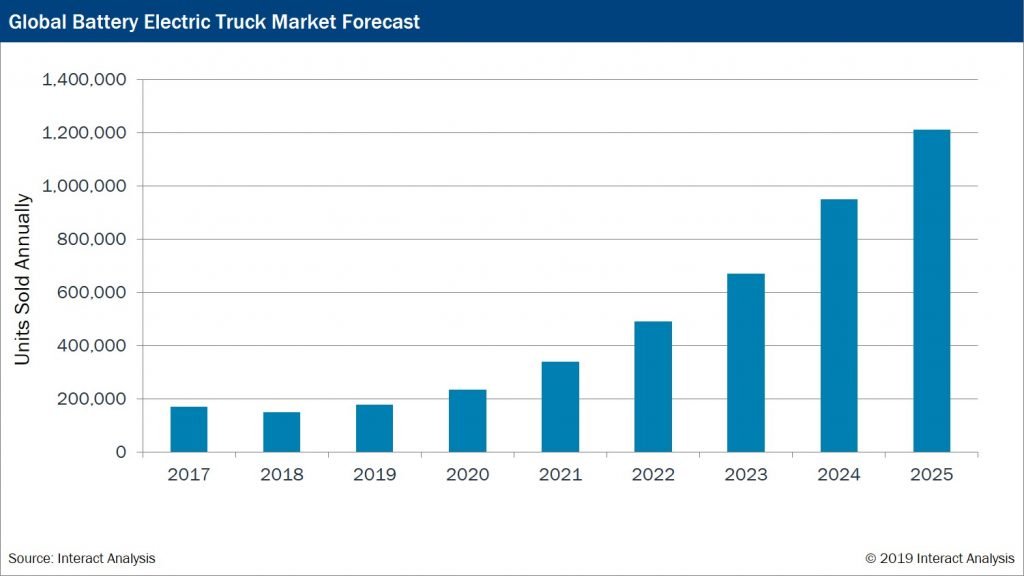 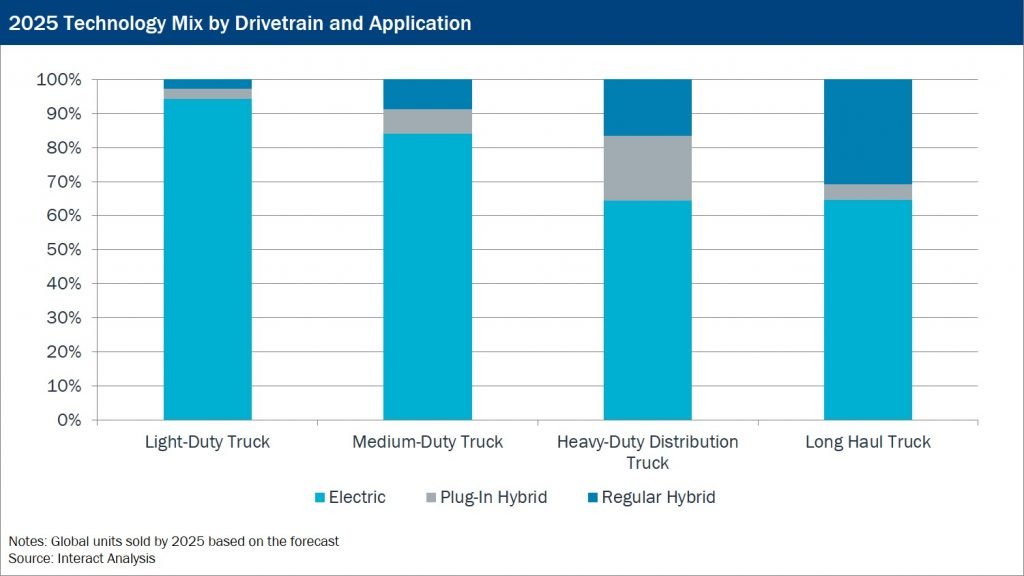 The data from this insight comes from our recently published Hybrid and Electric Trucks and Buses – 2019 market report. Click here to download the report brochure and sample pages.

Alternatively, to request a consultation with one of the report analysts, click here.