This insight on manufacturing in Brazil is the 4th in a series looking at different countries as they weather the COVID-19 pandemic. Our mission at Interact Analysis is to provide industrial strategists with a highly detailed data-driven analysis of past, current and projected performance in a range of industrial sectors in 37 key regions across the world. This analysis comes in the form of our quarterly-updated Manufacturing Industry Output (MIO) tracker, a tried and tested tool which has already proved itself of great value to planners. Our country insights give readers a glimpse of the depth of research they will encounter, should they invest in our MIO tracker.

Owing to its low GDP per capita, its high death-rate among its 200+ million population, lack of clean water and poor housing conditions, particularly in rural areas, Brazil is not considered to be a developed country. However, it has several characteristics of one. It is the largest economy in South America. Life expectancy at 74 years ranks higher than that of a number of developed countries, and certain industrial sectors are booming to the extent that Brazil currently ranks 8th in our 2019 global manufacturing output ranking, with a share of 1.81%. That number was obtained by comparing our USD float figures. When looked at using USD fixed average, Brazil moves up the rankings to 7th place, with a share of 2.58% (directly below India on 2.95%) – the reason for this is the Brazilian real’s weakness against the dollar. That share is tiny compared to the no.1 country, China, which took up an overwhelming 47.09% of global output, but the only other country in double figures was the USA with a 14.75% share. In this ranking, Brazil actually came ahead of some major players, such as the UK, on 1.30% and Spain on 1.25%.

Let’s take a look at one key sector…

The Chemical And Pharmaceuticals Industries

Brazil’s chemical industry has grown substantially since the millennium, as the country’s economy has grown. “Brazil is a natural destination for the world’s chemical industry because it is rich in oil, gas, minerals and rare earths and has much biodiversity,” remarked Marcos de Marchi, chairman of the board of directors at Abiquim, the national trade association for the chemical industry. The chemicals sector in Brazil is important due to its strengths in areas such as renewable chemicals, and agrochemicals. Brazil is the second largest producer of ethanol fuels after the United States, and drivers can fuel their cars with ethanol at petrol stations. “Brazil has such huge potential in biomass and so many cars in Brazil already use bio-ethanol,” commented Maurico Adade, president, Latin America, DSM, the life sciences company and specialty chemical producer.

Brazil is a key player in the world’s pharmaceutical markets. The Brazilian market is mostly dominated by sales of new medicines and biologicals, which comprised more than 40% of revenue in 2018, when the sector employed nearly 184 thousand people. Brazil ranks among the top six markets in size for drugs and pharmaceuticals with sales of $28.4 billion in 2018. More than half of the top 20 pharmaceuticals companies in Brazil are domestic companies, with Ache, EMS Farma and Eurofarma ranking the top 3 in 2018. Brazil’s increasingly elderly population, leading to rising numbers of incidences of chronic diseases, coupled with diseases associated with poverty and poor living standards are key drivers of market growth. In 2019 it was reported that Brazil spent 9.1% of its GDP on healthcare, making it the largest healthcare market in Latin America. This level of spending can be interestingly compared with Germany’s 11.25% in 2017, and the UK’s 9.63%. The growth of Brazil’s chemicals and pharmaceuticals industry is a good signifier of the progress the country is making on its path from being a developing to a developed nation. But there is still some way to go, notably in the field of healthcare, where investment, in spite of the relatively high proportion of GDP spent on it, has been uneven, reflecting the serious societal inequalities still extant within the country.

That progress from developing to developed status met a major obstacle in early 2020, when the pandemic hit, and the country’s chaotic response to the virus means it is still struggling to recover. Confirmed cases of the virus spiralled from just over 100,000 in May 2020, to over 3 million in August. These figures compare badly with other countries, such as the UK – 192,000 in May; 312,000 in August, Germany – 166,000 in May; 217,000 in August; and China – 84,000 in May; 89,000 in August. Brazil comes second only to the United States, and is just ahead of India in this unfortunate league table of infections, these three countries being the only ones in the group of regions covered by our MIO where infection rates by August have been counted in their millions. Brazil’s struggle with the virus has resulted in a serious hit to the economy. Our analysts predict a -11% downturn in manufacturing growth for the country in 2020, with machine tools production being the hardest hit, seeing a downturn of -30%, followed by the mining machinery sector, which will see a 27% reduction, and aerospace, seeing a reduction in output of almost 24%. The chemicals and pharmaceuticals sector will see a relatively small reduction in output of around 4%. This will cushion the blow to the economy, but other major players in the Brazilian economy, such as the pulp and paper production sector (-9%) and farming machinery (-14%) have not fared so well. The figures do not look good for the country and as a result, Brazil’s economy is likely to be one of the slowest to recover. 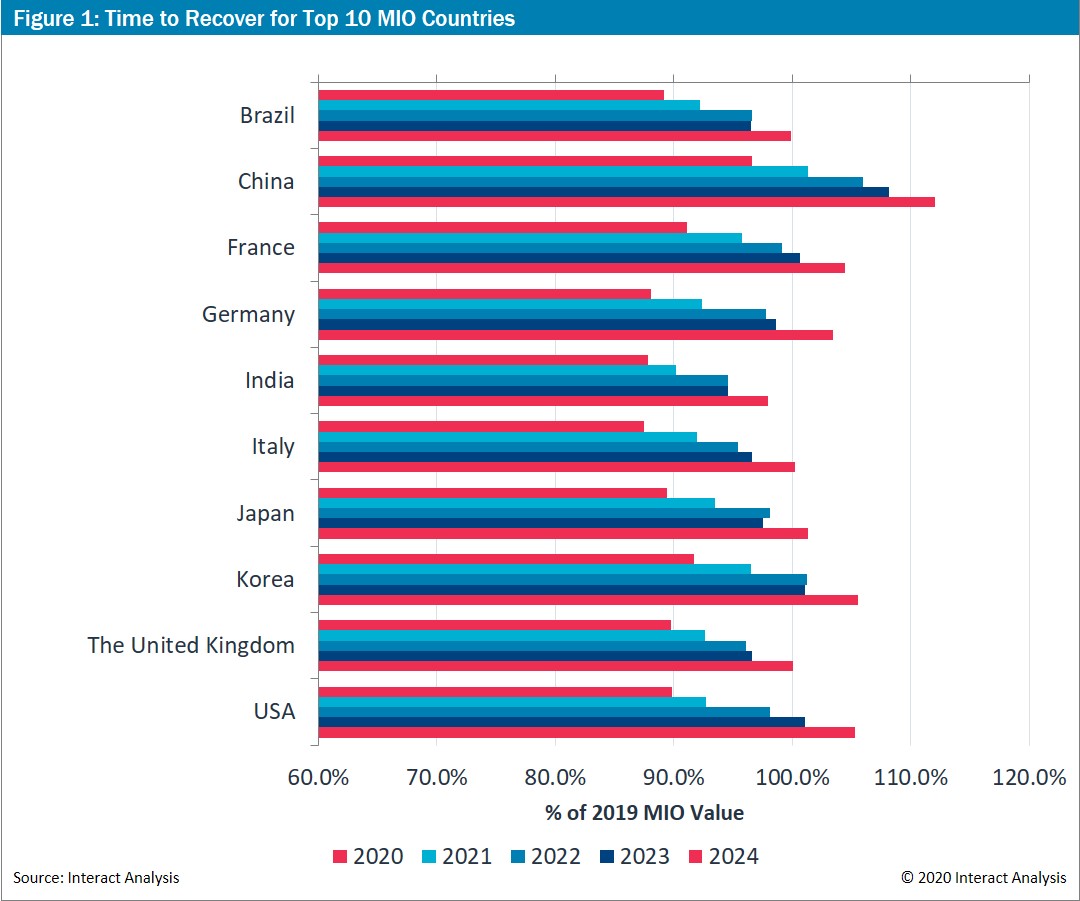 This table is a visual representation our forecast trajectory of recovery for the top 10 MIO countries. According to our data analysis, whilst the output of most countries will be back to 2019 levels by 2024, Brazil will struggle to achieve this, as will India, Italy and the UK.

To finish on a high note, we must look at what the future could hold for this giant South American country. We have seen the potential that is pent up in Brazil’s economy. Eventual recovery from COVID-19, coupled with good, effective government, eradicating poverty and inequality, and promoting the exploitation of its rich natural resources, could result in Brazil being the booming economy of the Southern hemisphere.

This tracker offers the most complete and unified analysis of the manufacturing industry globally. It quantifies the total value of manufacturing production with deep granularity for over 35 industries and machinery sectors, across 38 countries; presenting 13 years of historical data alongside a credible five-year forecast. For more information on the MIO Tracker, please click here.