Manufacturing Output: China And US To Lead The Way In Accelerated Global Recovery From COVID-19 Shock

This month, Interact Analysis publishes its latest quarterly update of the Manufacturing Industry Output (MIO) Tracker, and it makes interesting reading. As pharmaceuticals companies Pfizer and Moderna give us cause for optimism on the vaccine front, our research shows that earlier estimations of the damage caused to manufacturing output in 2020 by the COVID-19 pandemic have seen positive adjustments, and that recovery is therefore going to be faster. So, we have what is potentially good news on two fronts.

2020: not as cataclysmic as first thought

Back in August, the Interact Analysis team of expert data crunchers put the growth figure for global output in 2020 at -7.8%. This figure has now been revised upwards to -4.8%. That is a significant positive adjustment, and it has been caused in the main by the unexpectedly good performance of two major global players – China and the US – though other key regions have also fared well. The 10% contraction for the US in 2020 has been reduced by more than half. This is largely due to the fact that there have been no lockdowns, so while the virus has raged, manufacturing production has continued. China, whose government operated a stringent regime of virus-control, is now forecast to see a small amount of growth in 2020, (albeit below one percentage point). A curious point to note here is that diametrically opposite approaches to virus control – the US’s liberal – some will say chaotic – approach, which has resulted in a tragically high death toll from the virus, and China’s regimented, invasive martialling of the population, with resultant low mortality figures – have both had positive results on the manufacturing front. Though neither means to this positive end was necessarily desirable for the local populations.

Other Asian economies have fared better than expected on the manufacturing front, reflecting their success in managing the virus, but Europe, which continues to struggle with the pandemic, sees no overall upward revision of growth. Brazil and India, which have seen exceptionally low production in key sectors, continue to pull global growth estimates downwards. Overall, however, Interact Analysis is forecasting a much faster recovery, projecting that global output will surpass 2019 levels by 2022, rather than 2024, as originally predicted. That is a significant shortening of the timeline.

The slow road to recovery

COVID-19 is a moving target, so Interact Analysis is constantly adjusting its expectations. The charts below describe the anticipated trajectory of recovery of different regions, as envisioned in August 2020 on the right, and more recently, this month, on the left. One difference in the two graphics that should be noted is that the company has now gathered enough data to be able to extrapolate up to 2025 in the November update. 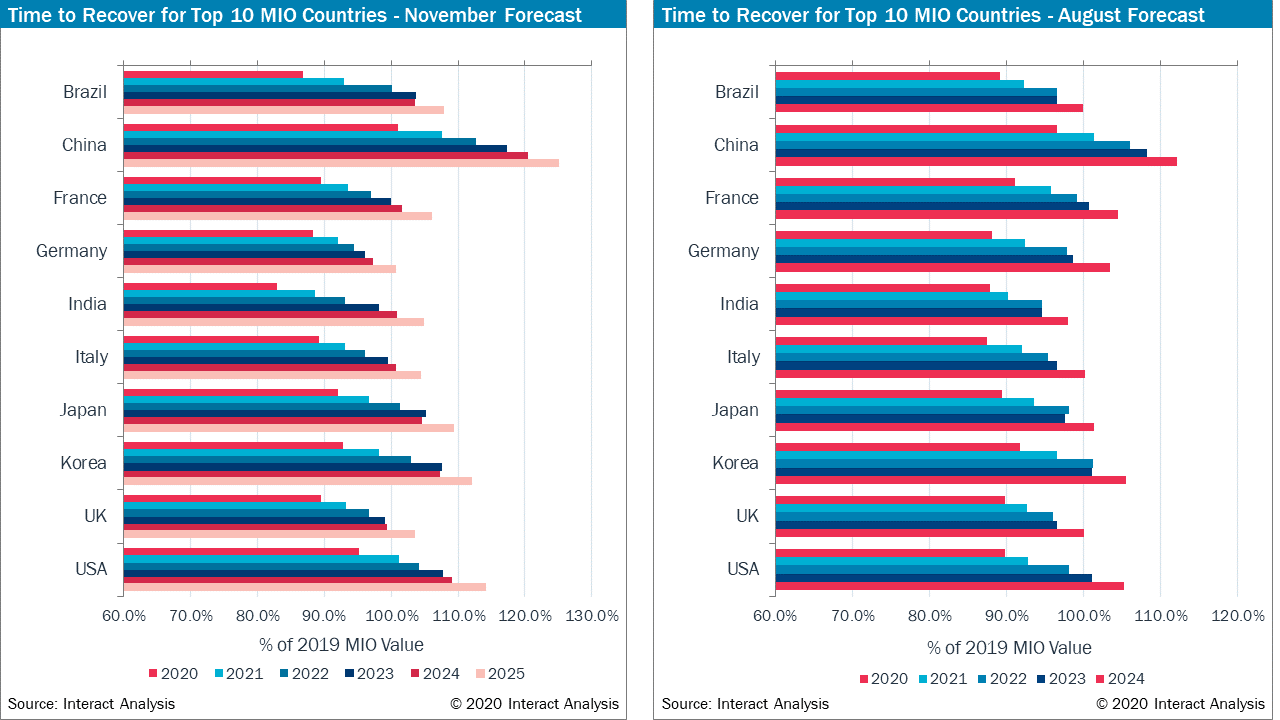 The key reference point to consider is the 100% line on the charts, as when a bar crosses this point it has surpassed its value in 2019.

The most notable change in this data is that since the US’s negative growth is expected to be much lower than previously thought, its recovery will be much faster. 2019 levels of output will be surpassed as early as 2021, rather than 2024, as forecast in our August update. Interact Analysis expects Europe to be the slowest region to recover, as the European region continues to struggle with Brexit, is enduring a second wave of the coronavirus and is generally in a parlous state, economically. All these factors will impact recovery.

Indicators released during September and October meant that previous forecasts for China were too pessimistic, but more on that later. Germany, the workshop of Europe, will continue to struggle, having seen 22 consecutive months of negative growth, so it’s difficult to predict a strong recovery. Germany’s manufacturing economy has reliance on sectors such as automotive which are areas of weakness right now. Furthermore, the country’s manufacturing economy depends on export markets, which continue to be slow to recover.

China and the US. Key players in the fight-back

Back in August, Interact Analysis projected growth for total manufacturing in China at -3.5%. However, based on quarterly data released by the Chinese government, this figure has since been modified to a positive 0.9% projection. There are a number of reasons for this. Southeast Asia has picked up the slack in export markets; there has been strong domestic demand, and key industries, particularly automotive, have not slowed down as they were expected to. This may be partly down to growing automation in Chinese factories. The country has seen something of a ‘robot revolution’ during the pandemic. The Chinese manufacturing economy has shown a remarkable resilience compared with most other MIO regions, and it has set itself up for significant growth up to 2025.

Interact Analysis reports that the total value of manufacturing output for China for 2020 stands at $17.9bn. This will increase year-on-year to $22.2bn in 2025, an added value of $4.3bn in the time period – an increase in output value of 24%. This is nowhere near China’s 79% increase in output value for the period 2010-2014, and clearly signals lost market potential, but in these turbulent times it is significant nonetheless, and compares well with Germany’s projected 15% increase in the period up to 2025, on the back of a 12% contraction in 2020.

Interact Analysis’s examination of the most recent 4 months of data coming out of the USA point to negative growth at between -5.5% and -4% for 2020, i.e. much better than the negative 10.3% they had previously projected for total US manufacturing this year. The primary factor at work here is most likely the high-level of stimulus injected into the economy during the early parts of the pandemic, and it is expected further stimulus will be applied. Reluctance by many people to adhere to measures designed to slow the pandemic has also driven the economy positively, albeit at the expense of higher infection rates.

The USA is in a state of flux at present, as the fractious transition from one presidency to another plays itself out, backdropped as it is by social unrest and the pandemic. It is too premature for Interact Analysis to factor in the possible effects of new industrial policies likely to be introduced by the new incumbent in the Whitehouse. Joe Biden’s Build Back Better programme plans to tie in economic revival to tackling climate change, racial equality and reinvestment in American manufacturing. Leaving that for a later update, the growth in manufacturing output for the USA between 2020 and 2025 is currently forecast to be of the order of 20%. This compares favourably with the 19% increase between 2010 and 2014.

COVID-19 and the industrial landscape. The survivors and the casualties

Food & beverage production is one of the few markets to see projected growth in 2020, albeit very low growth. While there have been challenges for food producers, notably around supply chain issues, the major factor affecting most other sectors does not exist – demand for food is strong. Food and beverage machinery production is predicted to be minimally affected by COVID-19. The regions with the highest CAGRs in this sector from 2020-2025 are Germany, China, and Italy with 6.4%, 6.1% and 5.7% respectively

The electrical & electronic equipment, and semiconductor & electronics sectors are also predicted to do well. Demand for ventilators and other key medical electronics has of course been high.

Semiconductors and electronics machinery will not be impacted in 2020, with growth anticipated of 9.7%. 2019 saw a global decline of -7.7%, and 2018 was itself was down some 20% compared to 2017. Historically there have never been 3 years of continuous decline so it is anticipated the market will pick up again towards the second half of 2020 and into 2021 and beyond, which agrees with billings and order reporting published by SEMI.

The countries with the highest 5-year forecast CAGRs for semiconductor production are China, Korea and the USA with 7.3%, 8.8% and 10.4% respectively.

The worst affected sectors are, as expected, aerospace and automotive. “This is the gravest crisis the aerospace industry has ever known”, the CEO of Airbus said recently, after learning of the industry’s earnings in the first quarter of 2020. In the USA, passenger levels are a mere 10% of where they were pre-pandemic. Boeing and Airbus have shed 60% of their value.

The automotive industry will take the longest to recover. In fact, by 2024 we are predicting manufacturing output will still not have surpassed the levels achieved in 2019. The increasing glut of inventory will take years to work through the system. Wuhan, the original epicentre of the virus, was a major manufacturing hub for automotive, so this is an industry that was not only hit hard but hit early too.