Will the Manufacturing Growth Cycle Continue in China? Part 2

Part 2 – Is this growth sustainable and what is the fundamental advantage of China’s manufacturing industry?

In this, the second of two analyst insights examining the Chinese manufacturing sector, we share our forecast for China’s manufacturing output over the next two years, and explain why we expect it to continue to enjoy strong growth. This growth forecast reflects the unique evolution of China’s manufacturing industry, which has undergone significant changes in recent years, as we discussed in Part 1.

When looking at the current major growth cycle, it is useful to place in context versus the previous one which took place during the period 2011 to 2014. During this period, manufacturing output was bolstered by a large government stimulus package totaling roughly four trillion yuan (US$606 billion). Such initiatives tend to drive short-term growth, as manufacturers take advantage of the incentives on offer, but don’t necessarily help in addressing fundamental issues within the larger supply chain and can lead to excess inventory. This is more or less what happened, and growth stalled in 2015 when the effects of the stimulus ended.

The latest cycle is different. Again, we see government intervention being a driving factor, but this time the scope of action was different. As outlined in our previous insight, major supply-side reforms took place in 2015, followed by substantial environment policy in 2016. These were policies designed with a longer-term view, but the short-term net effect was a sluggish period for manufacturing output, which was further mitigated by a soft global economic environment. After several years of capacity adjustment and supply-side reform, China’s manufacturing industry started to experience a pick-up in both production output and profits during the second half of 2016. This has clearly continued into 2017. The various data points we collect for industries and machinery sectors show that China’s manufacturing industry performance was incredibly strong in the first three quarters of 2017, with industries such as commercial vehicle production (including construction machinery), aggregates production, and electrical & electronics equipment production contributing significantly to this growth. 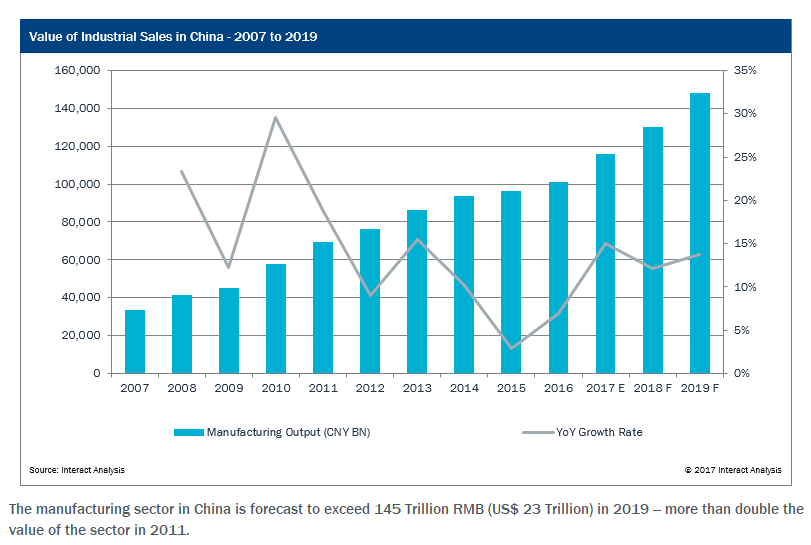 Some readers pointed out that the value of China’s manufacturing production shown in the above chart is larger than the country’s GDP. The reason behind this is that in our methodology we analyze and include the manufacturing value at every step in the value chain, whilst GDP only measures the value of the final good/services produced. Whilst this could be considered “double-counting”, it is an effective way of highlighting the degree of integration of an end-to-end value chain within one country. As a comparison, Germany – which is a major global producer, but more heavily reliant on importing/exporting at various stages of a product’s value chain – had a manufacturing production of roughly 45% of its total GDP in 2016.

Moving forward, our positive outlook for Chinese manufacturing reflects three fundamental components. First, the macro-economic environment has improved, and manufacturers globally are enjoying a period of favorable growth. Next, the structural changes in industry are now reaping benefits for producers in the region, and heavy and high-polluting industries (such as mining, steel and chemicals) are recovering rapidly from a difficult period. Finally, we perceive that the Chinese manufacturing industry has developed certain advantages that will help long-term competitiveness versus other regions around the world.

We explore this final point in a bit more detail below, outlining the manner in which China’s manufacturing economy is differentiated compared to other regions.

As the huge potential of the domestic market is increasingly being realized, it in turn is driving industry production and product upgrades. This growth in domestic consumption is stimulated by continued urbanization and the rise of the middle class in China, coupled with their demand for higher quality commodities and service. This provides two main advantages for local producers:

– The home market provides a huge test bed for many products and applications, which can help Chinese manufacturers move ahead quickly in many fields, and has been extremely helpful for successfully competing in many of today’s emerging technology trends such as IoT, Big Data and Artificial Intelligence.

The ongoing expansion to overseas markets (i.e. “The Belt and Road Initiative”)

“The Belt and Road Initiative”, which is a government plan to invest in infrastructure to support global trade, provides further growth opportunities for Chinese manufacturers by expanding overseas – not only by exporting products – but also involving technology and strategic cooperation with foreign entities.

The building of complete industry value chains for many sectors

The complete industry value chain and enormous home market has made it possible for many component suppliers and system integrators in China to gradually transform into independent manufacturers, providing sophisticated products or systematic solutions. Typically, industries in other major economies tend to rely on the imports and exports of components and sub-systems to produce finished goods. China’s economic reforms, on the other hand, have created major manufacturers at almost every step of the value chain within major industries (e.g. electronics industry, high-speed trains and aviation). Having the complete industry chain enhances the level of integration and drives the standardization of products or systems. It thus enables Chinese manufacturers to set technology or application standards, and set the global industry trend in the long run, instead of following it.

Industrial upgrades that happened in the past few years have significantly improved productivity and equipment utilization rates, especially for traditional industries. Alongside this, operational and management efficiency, optimization has been an ongoing effort especially for those companies which have grown into leading positions in their industries.

We will continue tracking the growth of China’s manufacturing industry to provide data information and our analysis/insights for this market.

(Footnote: following the publication of this insight at the end of November 2017, the “Value of Industrial Sales in China” figure was updated in January 2018).

The above analysis is taken from a new Interact Analysis report – “Manufacturing Industry Output Tracker“.