We recently wrote about the sudden slowdown in growth from China’s manufacturing sector in 2018 and 2019. Fresh economic data released by China’s National Bureau of Statistics on January 21st showed that GDP growth continued to slow to 6.4% in Q4 2018, the lowest since the Q2 2009, while the overall GDP growth in 2018 also hit a new low since 1991, which was in line with our prediction in our last insight.

However, it is not all bad news and this insight helps to show where some of the bright spots in the industry remain. We selected three of the most promising industries for further analysis:

In 2018, China’s automobile sales dropped for the first time in more than two decades. Compared with the same period last year, production and sales decreased by 4.2% and 2.8% respectively. Although the contraction of the automotive industry in 2018 is largely affected by factors such as market saturation and insufficient consumer confidence, partly damaged by the ongoing trade war with the US. Low-to-zero growth is expected to be the norm for the Chinese auto market after a decade of robust sales growth.

Despite the slowdown in the automotive industry, new energy vehicle production and sales still have maintained good momentum. In 2018, China’s production and sales of new energy vehicles reached 1.27 million and 1.26 million respectively, up 59.9% and 61.7% respectively from 2017. Due to the strong support of the Chinese government for pure electric (battery electric vehicle), the amount of batteries installed in EVs has also made a historic breakthrough. At the end of 2018, the 56.9 GWh of batteries had been installed in electric vehicles in China – a year-on-year increase of 56.3%, and the highest of all countries globally. 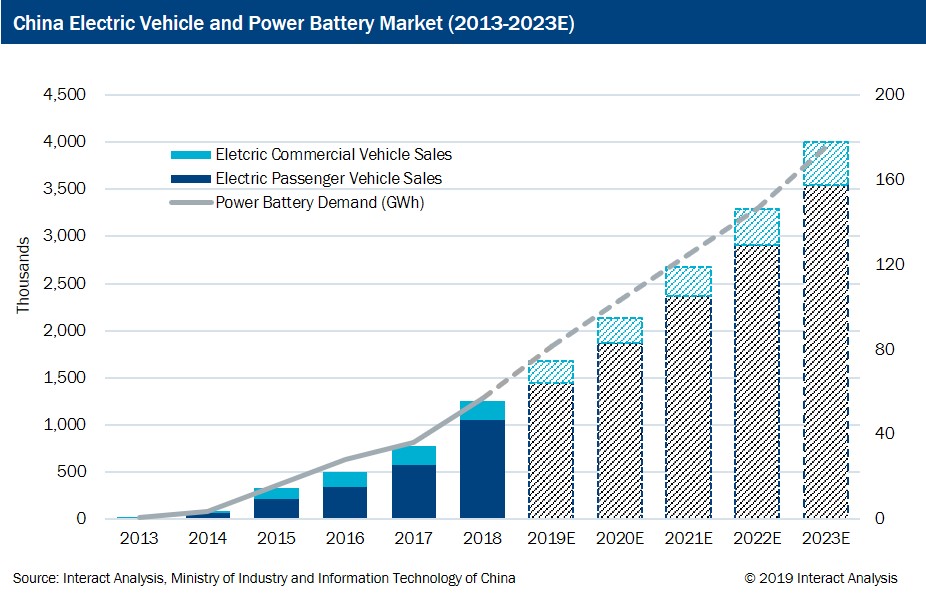 According to preliminary data from our “Lithium-ion Battery Production & Supply – 2019” report which will be published in April. In 2018, the amount of Li-ion batteries installed in end applications by CATL was 23.4 GWh in China and 24.1 GWh worldwide; and for BYD was 11.4 GWh in China and 12.4 GWh worldwide which ranked them 1st and 3rd in the world respectively. In addition to the battery manufacturers themselves, the rapid development of domestic electric vehicle will further benefit the whole value chain including the raw materials enterprises and Lithium-ion battery equipment manufacturers.

With the gradual substitution of traditional fuel vehicles by new energy vehicles, the new powertrain will reshape the existing energy structure. The recycling and second-use of Lithium-ion battery and the interconnection of vehicles and power grids (V2G) could create a new market worth several billion dollars.

In our analysis ‘Electrical & Electronic production’ can be divided into industrial production and consumer production, and the market trends and logic behind them are totally different.


The figure above clearly show the difference between consumer E&E production and industrial E&E production markets. The former has grown very rapidly over the past decade but fluctuated considerably; the latter has remained relatively stable. The total Electrical and Electronic Production industry grew at a CAGR of 11.9% in the past ten years, which is mainly driven by the rapid development of consumer electronics products (largely consumer 3C devices). However, the B2C industry grew fastest in 2016-2017 and suffered the worst decline from the impact of trade wars and consumer tightening in 2018. The growth rate dropped by nearly 10 percentage points in Electrical and Electronic Productions in 2018 was also largely due to the poor performance in the consumer sector.

Industrial-related E&E products typically have large variety in production processes and applications in different end markets. The end markets for EE products  and their corresponding requirements are diverse, which allows manufacturers to focus on products or solutions for specific applications in specific industries. By competing in multiple sub-sectors has weakened the scale advantage of some companies and forced leading manufacturers to re-focus on different segments. Therefore, although the fluctuations in investment and profit are very large, the revenue from principle business is relatively stable in the charts below.

The rollout of 5G networks and equipment will also play a great role in promoting the further growth of the E&E industry. As this will start with infrastructure and then services, network equipment, and terminal equipment it will likely bring about direct economic output around 2020. With the commercial maturity of technology and products, the output of information service providers will increase substantially in the future with the popularization of basic 5G facilities.

With huge market capacity and a complete production chain, China has become the world’s largest consumer of semiconductors and electronic components. In the past ten years, China’s market growth has led the world, with a CAGR of 13.1%.

The semiconductor and electronic component industry is a highly technical and capital-intensive industry that requires multi-faceted support at the national level in terms of policy, funding subsidies, technology transfer, and talent acquisition. To avoid over-reliance on imports, the Chinese government has upgraded the semiconductor and electronics components industry to a national strategic level and has a clear plan for design, manufacturing, packaging, and testing. Especially after the ZTE incident (in April 2018), the tilt of the government industrial investment fund can be clearly reflected from the growth curve of the fixed asset investment in the chart below.

The effect of policy support has been apparent. According to the data of China Semiconductor Industry Association, sales revenue of integrated circuit and chip design, which is most sensitive to R&D funds, increased by more than 20% in the first three quarters of 2018.

It is foreseeable that in the next two to three years, as the stimulating effect of research funding/fixed assets investment gradually spreads to production/company level that the semiconductor and electronics industry will have further room for growth.

Although the overall situation of the manufacturing industry has not been overly positive since 2018, the leading enterprises involved with industrial upgrading are still performing steadily. Following the industrial reform line of the Chinese government, advanced manufacturing and high-end industries will always be at the forefront and will be more able to withstand the downward pressure of the economy.

“Lithium-ion Battery Production & Supply-2019”, a report to provide a highly-detailed database and in depth analysis of lithium-ion battery production, manufacture and supplier base, with a focus on industrial-grade batteries for automotive and grid application. Click here