Battery electric (BEV) trucks are forecast to reach 17% of truck registrations in 2025 globally and hit 43% in 2030, according to new research from Interact Analysis.

This will be a tremendous surge from the 2021 market of only 1%. Growth in 2022 and 2023 will be driven by utility and light-duty trucks, such as vans in the UK and pickup trucks in the US. Smaller BEV trucks in China are also doing well. 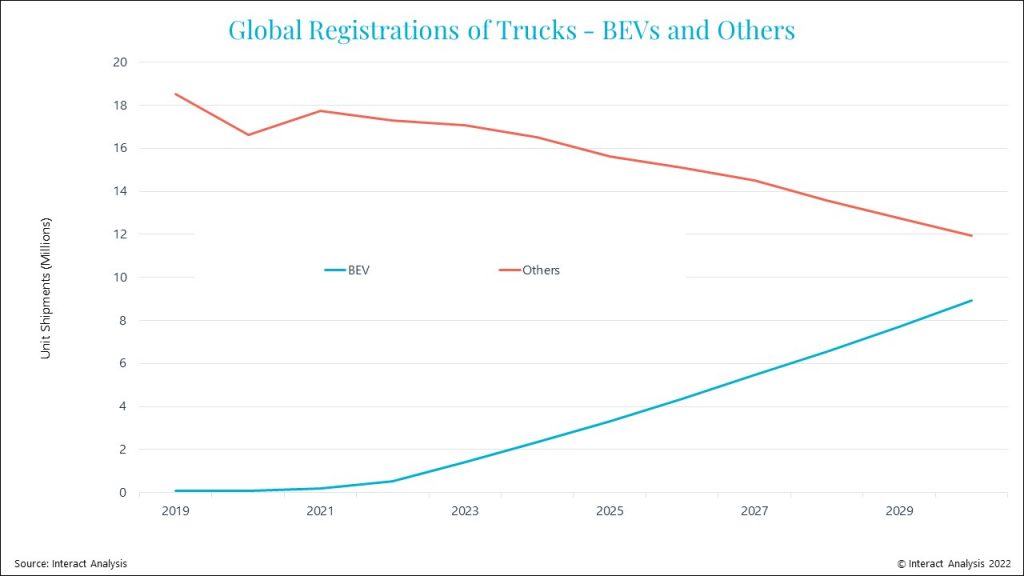 From 2024 to 2030, medium-duty and heavy-duty distribution vehicles will also make a strong contribution. The potential is high as the TCO can be attractive as larger vehicles on average do higher mileage. But the available supply of vehicles is low for now. Long-haul trucks are forecast to remain a low percentage BEV for much of the decade.

While the units of medium and heavy-duty vehicles are currently smaller, the tremendous growth forecast, combined with the larger revenue per vehicle for everyone from components suppliers to OEMs, make this market of significant interest. It is too early to say who will be the leading players in the market. However, announcements of new vehicles in this area will increase in the next few years in China, the US and Europe.

China and Europe Lead for Now, US to Catch Up

China, backed by government strategy and investment for some years has had a strong start and currently has a BEV truck penetration rate of 2% in 2021, double the global average. Many European countries had a similar or higher penetration rate as China in 2021, while the US lagged behind. However, in the next few years many new vehicles will be launched in the US (or already existing vehicles will start to achieve a larger production scale). According to our OEM and model level database, we forecast the Ford F-150 Lighting to lead sales of BEV trucks in North America, with Rivian, Tesla and Bright Drop making significant contributions as well. 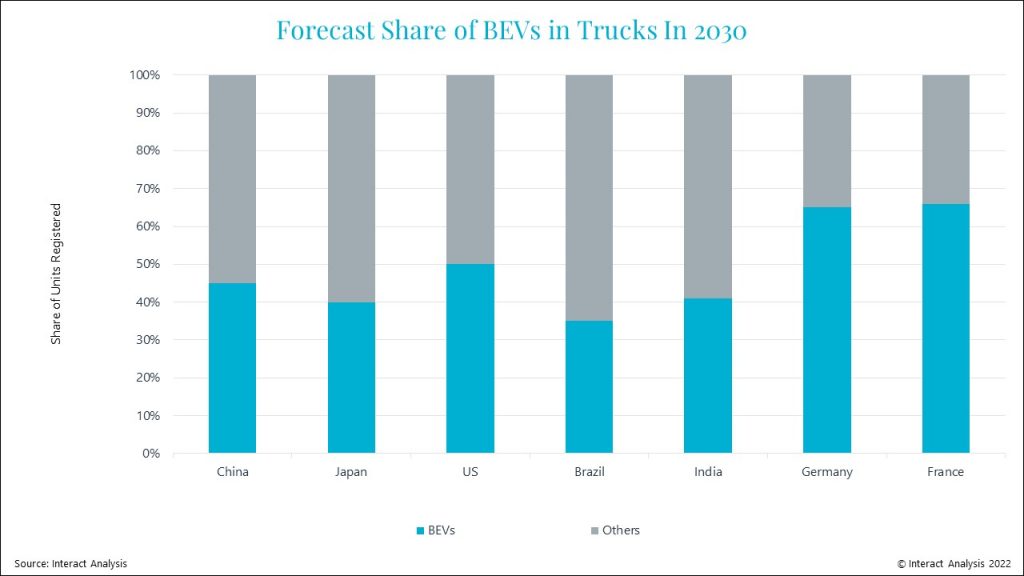 There Is Enough Capacity

While supply chain challenges are persistent in the short term due to the effects of Ukraine and COVID, these appear to be a temporary restraint on short term growth rather than a significant medium term drag. Component prices have risen, putting pressure on vehicle pricing. However, at the time of writing, this situation appears to have likely reached its worst point and we expect the situation to get steadily better over time. This will of course depend on unpredictable world events.

The supply shortage is more due to issues throughout the supply chain rather than a lack of capacity. According to our research, we forecast capacity utilizations for battery production in the short to medium term to remain in the range of 62%-65% and OEMs are still building up vehicle production factories. Many more gigafactories are planned as Europe and Americas tries to catch up to China. With enough capacity available, increasing technological development, improved awareness of electric vehicles, and, eventually, lower battery prices should have a positive effect on electric vehicle adoption.

According to our analysis on the total cost of ownership (TCO), most types of electric vehicle will, in the next few years become (or already are) less expensive than competing vehicles using diesel or other powertrain technologies. This is mainly due to lower fuelling and maintenance cost, as well as some subsidies. According to our analysis of historical data however, BEVs do not achieve good sales when they can only offer a 10%-20% TCO advantage. We believe this is due to focus on the high up-front cost, and resistance to chance and uncertainty about the new technology. 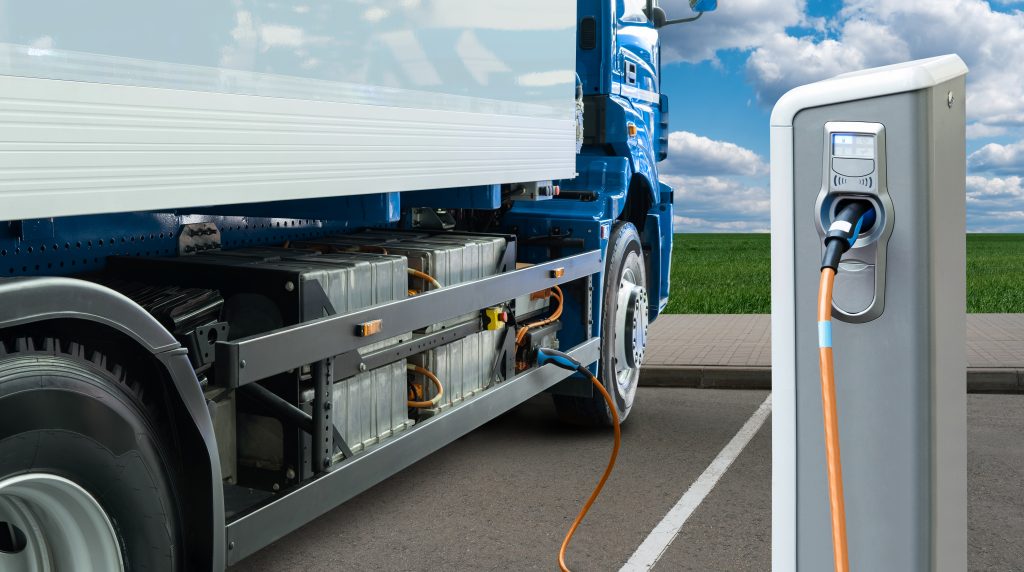 What is critical about this market – and why tipping points are going to be reached in some regions and vehicle classes in the coming years – is that we are forecasting TCO to reach 30%-50% in many cases by the middle of the decade. This will happen just as more vehicles are coming onto the market and just as more business are getting used to the idea of electric vehicles and seeing their competitors use and produce them.

At this point many organizations’ assessment of the situation changes because now the payback period is shorter and the initial investment in the high cost of the vehicle can be offset against future gains. Alternatively, it becomes possible to use battery (or vehicle) leasing or credit to obtain an electric vehicle at a competitive cost.

That is the main reason why we are forecasting electric vehicles to do well. Concern about a company’s green image and ESG credentials – or even genuine concern about the climate – is a secondary factor in most decisions. BEVs will simply be less expensive in most vehicle classes and most countries.

Fuel Cell Vehicles Are Not There Yet

According to our total cost of ownership calculations, the same argument cannot be made for fuel cell vehicles, at least not this decade. Due to the high cost of the vehicles, the fuel and the infrastructure, we are forecasting low adoption to 2030. China has a higher forecast than other countries due to a strong focus from government, but the general direction globally is a steady trend to BEV in most cases rather than fuel cell vehicles.

The adoption of BEVs will lead to challenges. One is the lack of familiarity compared to conventional vehicles. Another is the need to check routes are feasible with the lower range of electric vehicles. Another big challenge is that charging infrastructure – especially in city centres – can be tricky. Installing a charging point can sometimes be the easy part as organizations have to negotiate with an electricity utility and other stakeholders to put in new cables to get large amounts of power to where it’s needed.

However, none of these challenges are an insurmountable roadblock, especially in the context of the prize of much lower operating costs for users of vehicles that can solve the issues. Government involvement, where available, will help. Government can play an important role in coordinating stakeholders and support adoption, even if not much money is on the table in the form of subsidies.

So, there will clearly be many opportunities. To explore these opportunities in more depth, the new Hybrid and Electric Truck and Bus report contains detailed segmentations by country, vehicle type, powertrain, transmission and architecture type. The report covers truck and bus equally, although this particular insight was more focused on the truck market.