“IVECO and FPT Industrial, the commercial vehicle and powertrain brands of CNH Industrial respectively, will assist in engineering and manufacturing expertise to industrialize Nikola’s fuel-cell and battery electric trucks.

Fuel-cell technology is the logical next step to liquefied natural gas-(LNG) powered engines as it builds on existing refueling networks, enabling local on-site production of hydrogen.

Strategic near-term project milestones include the industrialization of the Nikola TWO fuel cell- powered Class 8 truck for the North American market, as well as the integration of IVECO S-Way truck technology into the battery-electric powered Nikola TRE cab-over model for both the North American and European markets. In the long-term, a European joint-venture will cover both battery electric vehicles (BEV) and fuel-cell electric vehicles (FCEV) launched by Q4 2022. Nikola plans to leverage IVECO’s European sales, service and warranty channels to accelerate access to the European market.”

It should also be noted that CNH Industrial has decided to partition its business into two parts – with its on-highway business in one company and its off-highway activities in another. This is with the aim of improving market growth and profitability. 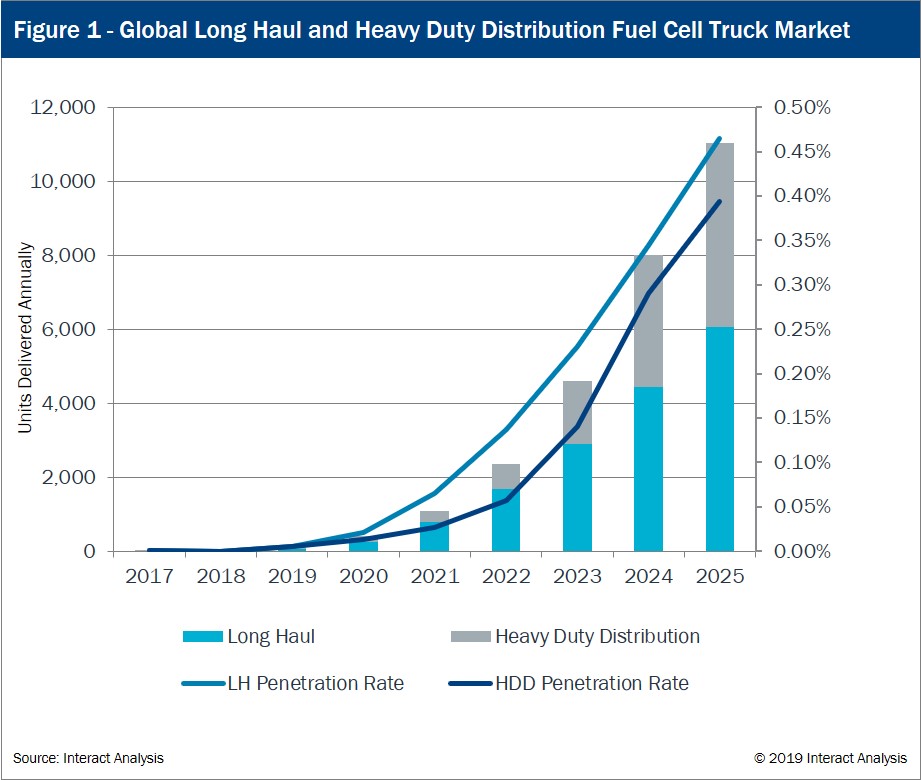 Hydrogen is, in many ways, an ideal choice for heavy duty and long–haul applications. The size of the batteries required for long haul applications will limit the uptake of battery electric models. For example, Freightliner’s eCascadia, developed for the US market, uses a 550kWh battery providing 250 miles of range. Given that a typical long–haul truck travels between 300 and 400 miles in a day, the integration into existing duty cycles will prove to be challenging as drivers will have to plan their driving breaks to coincide with available charging stations at least once a day.

With an extended range and smaller batteries, fuel cell trucks are better suited for long haul application, but the cost of manufacturing fuel cells will have to be significantly reduced before they can become commercially viable. That being said, with the right legislative environment and financing options, the fuel cell truck market could take off sooner than expected. Nikola Trucks is adopting a subscription–based model which includes the hydrogen fuel and has already received over 11,000 pre-orders with a large portion coming from Europe, particularly from Norway and Austria.

In 2018, Hyundai Motors signed a contract with a Swiss hydrogen producer H2 Energy to supply 1,000 fuel cell electric long haul trucks over the next five years. Confirming Hyundai’s commitment to fuel cell technology, it announced in December 2018 that it would invest $6.7 billion in fuel cell technology through to 2030 and produce 700,000 fuel cell systems annually.

Greenstat, a company based in Norway, has made a similar target to get 1,000 fuel cell electric long haul trucks on Norwegian roads by 2023. A large number of reservations for Nikola Motor’s European fuel cell electric trucks have come from Norway.

This investment is significant for a number of reasons:

In the view of Interact Analysis this represents one of the most exciting announcements in some time with regard both the US truck market and the electrification of commercial vehicles. Nikola has made waves in the US but now has an established partner to help it scale and ‘go global’. CNH’s investment gives it a technology set and potential access to the US market that it hasn’t had before.