Cobot Sales Will Reach $5.6bn by 2027, Driven by Growth in Non-Manufacturing Applications

As demand has grown for equipment automation and production flexibility, so too has the desire to find new technologies which can help achieve these aims. Collaborative robots have emerged as one such technology, offering the potential to reduce the pressure on the manufacturing industry caused by increasing labour costs, assisting – and even replacing – human workers to complete tedious tasks and ensure safety in certain working environments.

Using robots and robotic technologies to augment existing working practices is not new. Indeed, there are five different main categories of industrial robots, but cobots are quite different in that they share workspace with humans directly. They are also easy to integrate due to their flexibility, as well as being simple to set up and use, making them attractive to small and medium sized companies who have never previously used robots.

As such a new segment of the industrial robotics market, it is exciting to forecast that annual revenues for cobots will reach $5.6 billion in 2027, thus accounting for 30% of the total robot market. This is a staggering rate of growth, with sales of cobots increasing by nearly 60% year-on-year from 2017 to 2018. Automotive and electronics are still the largest end-user industries in 2018, however it is expected that logistics will surpass automotive to become the second largest user group in the near future. 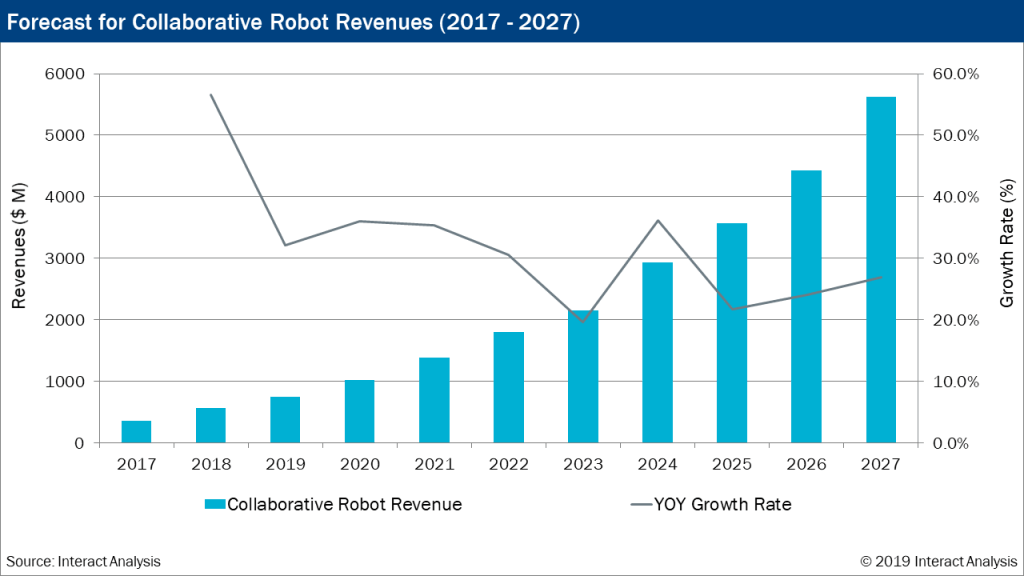 China is Leading the Way

China has seen high take-up of cobots because the country, as the world’s largest manufacturing base, is suffering from a labour shortage and is in strong need of higher levels of automation to improve production efficiency. Chinese rules and regulations surrounding industrial equipment are very different to those in Europe and North America. This has fuelled a range of Chinese cobot companies who only serve their local market: a trend that somewhat distorts the overall figures. For this reason, our Collaborative Robot Market 2019 report offers a comparison between the figures with and without the impact of China.

The ability to split out China is crucial because, as the report highlights, demand is significantly different in China than in the rest of the world. This is due to a number of factors. In China, vendors are producing cobots at a much more attractive price point for end-users. In many cases, these users require a simple, cost effective entry-level robot that isn’t weighed down by unrequired specifications. This enables organisations to test a cobot application without much risk in the way of initial investment or resource from in-house engineering teams.

A number of traditional industrial suppliers have entered the market, including ABB, Fanuc, Staubli and KUKA. But at this stage, compared with pure-play cobot vendors, they have no advantage in terms of market acceptance and price. The sole focus of these newer organisations is on producing cobots, which enables them to be nimbler when it comes to meeting their customers’ needs. That said, growth outside of China is still forecast to rise at a CAGR over 30% in the next five years.

For a market segment which has only been active since 2016, collaborative robots have demonstrated huge growth potential. Their future role, and the scope of this potential, is however still unclear. One interesting development is the trend towards mobile cobots, particularly in the logistics industry, with many suppliers moving towards creating these products. Another involves retrofitting sensor skins on existing industrial robots to enable them to operate without fences.

By 2023, forecasts show the market will have matured and growth will emerge in non-industrial settings. These include life-sciences and even the hospitality industry. Ever considered a robot pouring and serving your morning coffee? It might not be too far away.