The Indian bus market can be segmented based on the duty cycle. The inter-city bus segment, which is less sensitive to cost and more concerned with the quality and comfort of the bus, tends to be for private transport operators while the city bus segment is highly sensitive to cost and tends to be for public transport operators governed by municipalities. Inter-city and city buses have therefore become synonymous with premium and ‘good enough’ buses, respectively.

Since they won their first tender in 2001, Volvo buses have carved out the premium inter-city bus segment from scratch and have enabled long distance routes which were previously difficult to run commercially due to the high maintenance costs associated with running poor quality buses. As a result, Volvo Buses own the largest premium market share. The ‘good enough’ city bus segment, on the other hand, caters for shorter routes and is dominated by local manufacturers such as Tata Motors and Ashok Leyland. Each segment is governed by different macro-economic drivers which will in turn dictate their suitability for electrification.

Social and economic drivers for the electric city bus segment

Interact Analysis have been tracking publicly confirmed orders for city electric buses totalling 932 units as well as publicly stated intentions to order a total of 1243 units since the start of 2018. Excluding China, this accounts for more than 24.9% of the global orders we’re tracking. 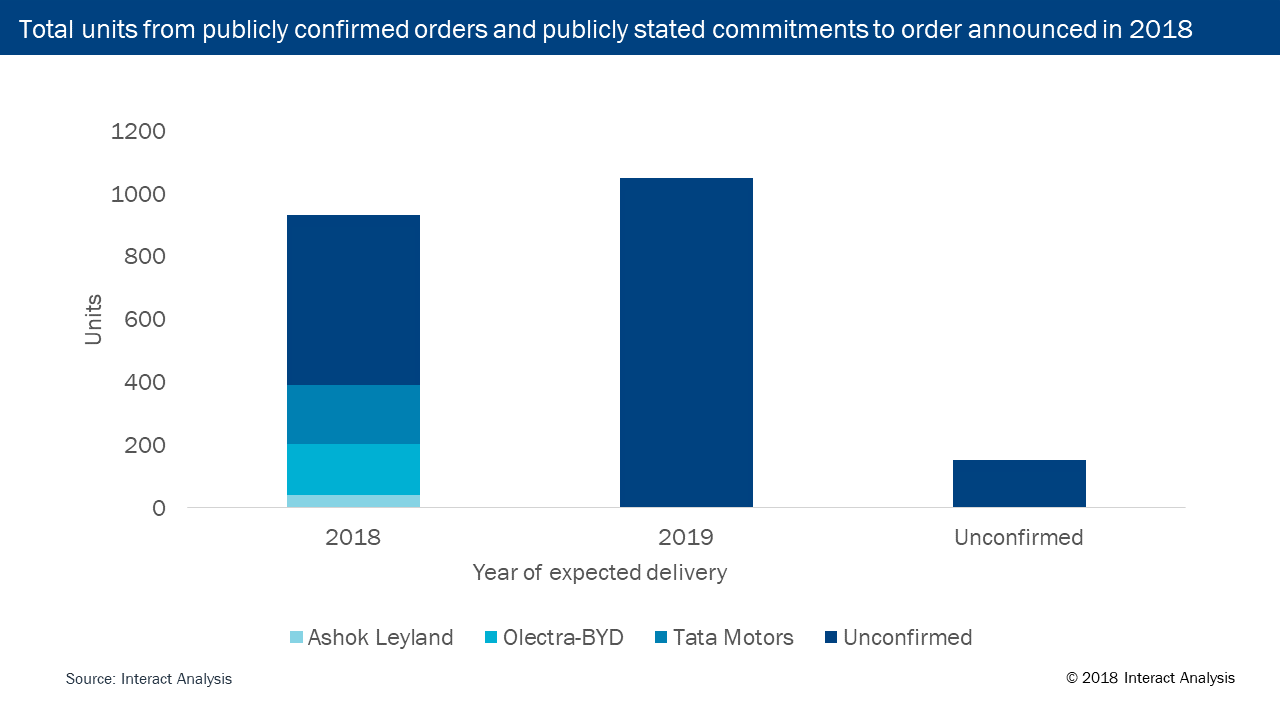 Underlying the growth of electric city buses are several favourable social and economic drivers. Firstly, because of the growing middle class and an increased awareness of the negative health effects of pollution, many Indian cities have made commitments to reduce vehicle emissions. The government is actively looking to promote its public transport system to reduce the number of privately-owned vehicles. Being one of the main culprits for tail-pipe emissions, city buses are at the top of the political agenda and since they operate a predictable duty cycle lend themselves to electrification.

In accordance with the societal and political sentiment, the Indian government has been funding an aggressive incentive scheme called The Faster Adoption and Manufacturing of Hybrid and Electric Vehicles (FAME). Introduced in 2015, the first phase of the FAME incentive scheme provided demand-side subsidies for hybrid and electric vehicles. Although not initially included within the programme, subsidies for electric buses covering 60% of the up-front cost were introduced in 2017.

In addition to the government subsidies, many public transport operators in India run on an OPEX model. Buses are provided by OEMs for a fixed monthly fee and a variable fee calculated on a per kilometre basis. This model is sometimes referred to as the cluster model since the operator contracts an OEM to serve a set of routes in a similar area. Having an OPEX model eliminates the CAPEX cost of the bus which is one of the main barriers to electric bus adoption.

Sensing a turning tide in the city bus market, a number of foreign OEMs specialising in electric buses have made strategic partnerships with Indian manufacturers. Solaris Bus and Coach has formed a joint venture with JBM auto who together will develop the EcoLife electric bus using Solaris’ electric driveline technology. BYD, the largest manufacturer of electric buses globally, has formed a strategic partnership with Olectra Greentech (formerly Goldstone Infratech) which will produce electric buses using BYD’s K9 chassis. BYD is also investing $68.8 million in a manufacturing facility based in Karnataka to help bring down the cost and increase the localisation content of the buses. 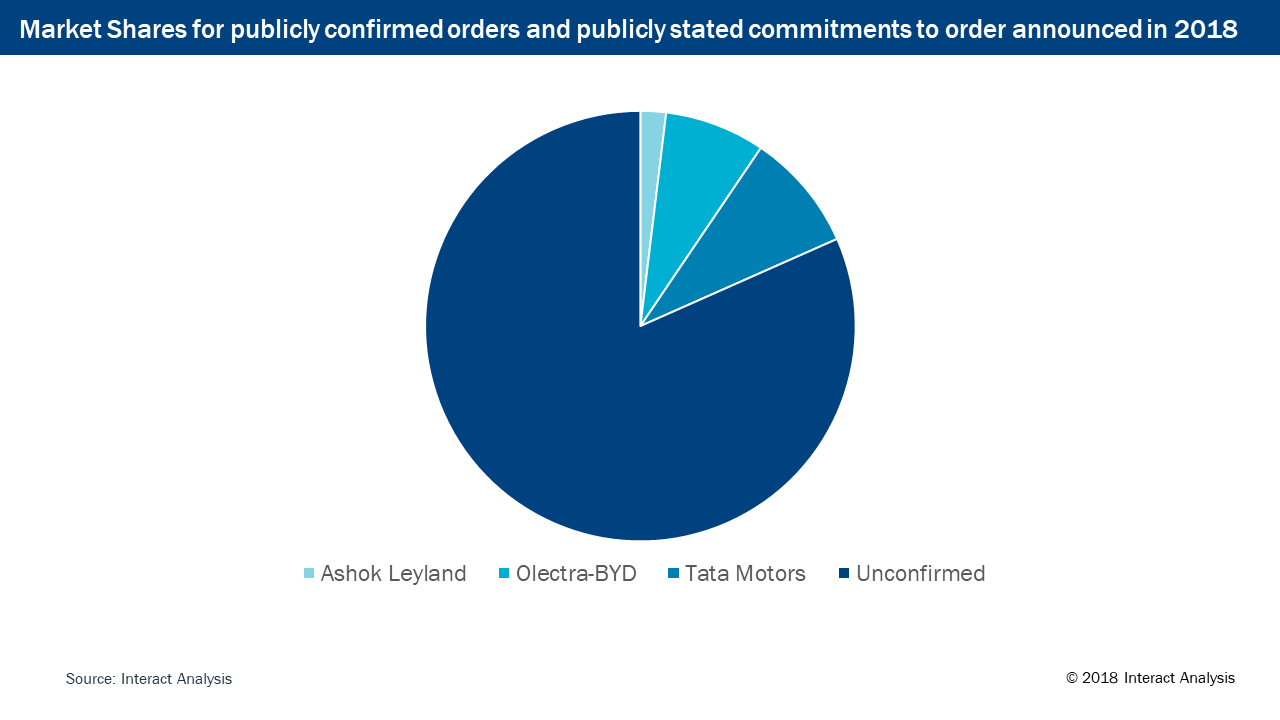 Despite the seemingly favourable conditions, the market is yet to realise its full potential. The main barrier is uncertainty. The Department of Heavy Industry (DHI) which provide the FAME subsidies have recently gone back and forth on whether it will subsidise electric buses on the OPEX model. As a result, municipal transport authorities will be hesitant to apply for subsidies using an OPEX model, many of whom won’t have the CAPEX budget to purchase the electric buses out right even when subsidised.

The confusion stemming from the DHI is likely due to the introduction of the second phase of the FAME incentive scheme which was scheduled to take place on the 7th September, however, the implementation date has been extended by an additional 6 months for the fourth time since 31st March 2017.

Although the city electric buses are premium in comparison to the buses currently in operation, they are still subject to a high degree of cost sensitivity. Without subsidies, the city electric bus market will likely experience poor growth and low penetration rates. Without confidence, domestic OEMs will be reluctant to invest heavily in e-mobility programmes. The same is true for the installation of infrastructure to support an e-mobility ecosystem. 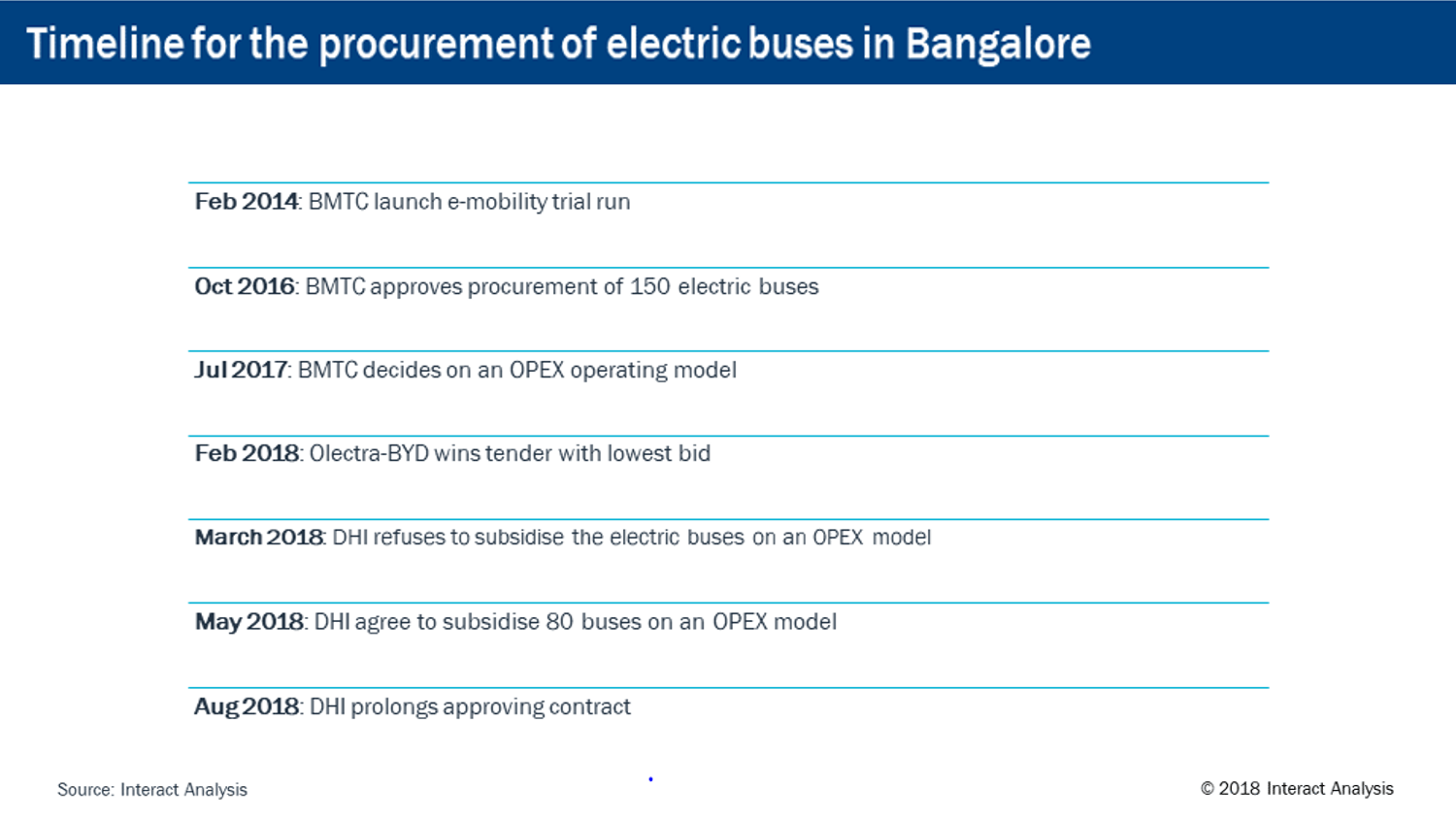 A number of challenges face the electric inter-city bus market; most of which are related to the duty cycle of the vehicles. Firstly, the length of the routes tends to be much greater than the current range of even the most advanced battery electric buses. The popular Bangalore to Mumbai route, for example, is just under 1000km long. Since the routes are distributed over large geographical areas, a sparse network of opportunity charging sites would have to be installed – as opposed to a few ‘hub’ opportunity charging sites commonly used in cities – which would come at a large CAPEX cost. Secondly, there’s little opportunity for regenerative breaking during long distance routes which reduces the cost-effectiveness of the buses.

In addition to the challenges faced by the duty cycle, the lack of overall demand for premium inter-city buses from non-incumbent OEMs will limit the rate at which electric buses penetrate the market.  Earlier this year, for example, Scania closed their production facility in Narasapura after just four years of operation due to low demand. Although Volvo Buses and Mercedes-Benz – the two largest premium inter-city bus manufacturers – both have successful e-mobility programmes in Europe, they will likely use the Indian premium bus market as a means to push their euro IV and V models which are now non-compliant in a number of European countries.

Furthermore, the decision to procure electric buses over diesel is still largely politically driven. The routes in which the inter-city buses operate tend not to be within the cities themselves and as a result there will likely be less political and societal pressure for the market to switch to electric.

When eventually implemented, the second phase of the FAME incentive scheme will likely provide subsidies for the domestic manufacturing of lithium ion batteries as opposed to the up-front cost of the electric bus.  This would mean that only domestic OEMs and joint ventures with a minimum level of localisation would be able to capitalise on the subsidised batteries which is in line with the Make in India initiative.

As a result, it will be hard for foreign OEMs to compete against local manufacturers for market share within the ‘good enough’ city electric bus segment due to the high cost sensitivity of the market. Under the support and protection of the Indian government, it’s likely we will see an increase in the number of local OEM’s producing city electric buses resulting in a highly fragmented market similar to the new energy vehicle market in China. There will be fierce competition to gain market share before the government liberalises the market following the eventual subsidy slope after which the competition from Chinese OEMs will likely put the smaller local OEMs out of business.

Due to the difficulties manufacturers face to establish themselves within the premium inter-city segment, the incumbent manufacturers will likely dictate the rate at which electric buses penetrate the market. A number of technical and political barriers must be overcome, however, before the market can enter a period of high growth.

Despite headwinds, the Indian electric bus market is growing faster than many other countries. The government meets regularly with industry bodies to make sure that their policies are in line with the needs of domestic OEMs; a trait the Modi Government has had a reasonable degree of success at.

The city bus segment is better suited for electrification due to the political climate and the economically favourable operating models. For the market’s potential to be realised, however, clarity on subsidies is necessary and timings must be communicated without delay.