Could Glass Bottles Shatter the Plastics Market’s Grip on the Packaging Sector?

A recent Wall Street Journal article by Saabira Chaudhuri highlighted that several major industry players in the food and beverage market are considering moving to glass packaging as a more environmentally friendly alternative to plastics. A shift such as this could have far-reaching consequences for industries from palletizers to commercial vehicles to plastics production. This could significantly affect the outlook for these industries if the policy is pursued aggressively or is legislated on by climate conscious central governments.

In 2019, several of the world’s leading manufacturing companies signed up to a new initiative called Loop. Founded by Jersey-based innovative recycling company Terracycle, Loop is a multi-company plan to move away from hard-to-recycle packaging and products to alternatives which are much easier to deal with and less damaging to the environment. Loop uses an E-commerce system where packaging is returned to the sender for reuse. Returning of packaging is a scheme that has worked well in eCommerce contexts in Scandinavia. Incentivizing people to consider their environmental impact is one way of altering their purchasing habits and is becoming a steadily more important driver for certain markets. Further, the good publicity garnered from companies that appear more environmentally conscious is a vital consideration. Examples of companies participating in Loop are Mondolez, Coca-Cola, PepsiCo, and Procter & Gamble. Loop currently operates only in the north-west of the United States and Paris, but they are expanding rapidly.

So, why is glass now being considered as a sustainable packaging material again after such a drop off over the last 45 years? The WSJ points out that the Beverage Marketing Corporation reports only 1% of soda bottles in the US are currently made of glass, down 58% from 1975. Over the same time frame, plastic soda bottle packaging use has jumped from 0% to over 30%.

Proponents of the glass industry believe they have the upper hand in terms of environmentally friendly packaging. Viridor, a UK based waste management company, state on their website that glass can be recycled indefinitely in a process which can take as little as 3 days and is ‘very sustainable’. They could be correct from a recyclability perspective, however, in a single use case, glass has a significantly worse global warming impact than plastic. In a paper in the International Journal of Life Cycle Assessment from 2012 about the environmental impact of carbonated soft drinks, it is stated that one would need to recycle a glass bottle 3 times to bring its carbon footprint in-line with aluminium or 500 ml plastic bottles.

There are several further problems to consider with a move to glass-based packaging. For instance, while re-using glass bottles for their intended purpose is relatively trivial, getting the glass back in one piece is easier said than done. Currently when glass is recycled it is treated in the same way as other recycling materials, yet it has a propensity to break. Broken glass can damage conveyors and has to be remoulded which is a time consuming, energy intensive and expensive process, as is the replacement of machinery damaged by broken glass. For it to be recycled effectively at a much larger scale would require infrastructural changes in the way recycling is handled.

Further, the increased use of glass has implications for other industries. Glass is heavy compared to plastic: a 500 ml plastic bottle would weigh approximately 0.2kg whereas its glass counterpart could weigh over a kilogram. This has implications for the supply chain. For instance, the weight of the end product could force deliveries to be conducted in either smaller quantities or through the use of more heavy-duty trucks, this could increase the cost and time and thus reduce the profit margins for suppliers. In an economically difficult time, where production is being assaulted on all sides by Coronavirus, trade disputes, and low consumer confidence, it is a tough sell for manufacturers to switch to a long term positive while requiring them to take the hit in the short term. If we were to see legislation in conjunction with a mandated carbon target for companies we could see such a move influence a drive towards electrification, as a means to reduce costs and align with carbon targets however at the moment this seems a remote possibility.

Another industrial sector which could be affected by this change is the palletizing market. In 2019,  Interact Analysis conducted research into the North American palletizer market . The food and beverage sectors comprise a significant percentage of the total market for palletizers (See Figure 1). 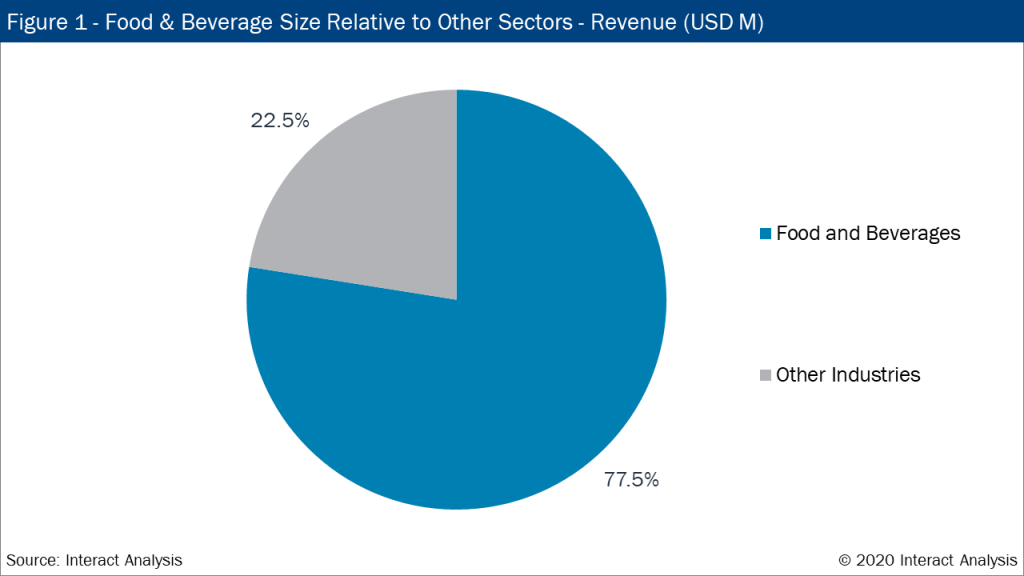 As described previously, glass as a manufacturing material is difficult to control and manipulate. Increased usage of palletizers would take some of the stress off this problem and will, more than likely, become an essential part of any factory floor whose plastic packaging products are converted to glass packaging. Due to its brittle nature, mistakes with the movement and handling of glass tend to have a more destructive effect. Warehouse automation equipment such as palletizers will reduce the chances of something catastrophic happening compared to a more manual process.

The current forecast for palletizer demand in North America is for 8.8% growth in 2020 with a revenue CAGR of 9.6% expected for the period of 2018-2023. If the mooted change were to come into effect, then we could see a net positive impact on the (already positive) current forecast.

Materials handling equipment (MHE) is thus an industry which could be impacted by such a switch. At Interact Analysis, MHE is one of several key machinery sectors we focus on. Our current forecast for 2020 is for growth in production value in the region of 3-4% up from a relatively slow year in 2019 (See Figure 2) . However, given that Asia has the largest tri-regional market share, and given that its manufacturing output is currently suffering at the hands of Coronavirus in China and Japan, it is likely that the forecast will tighten in the next few MIO updates as the fallout from COVID-19 is more firmly established in our indicators. 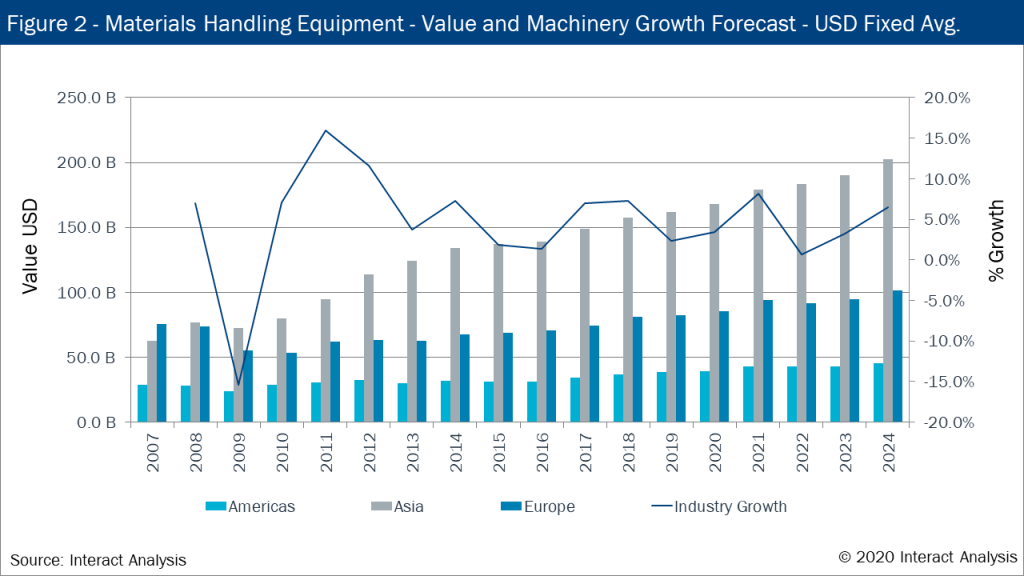 A move to more glass packaging could be a driver for further investment in materials handling equipment although it would be dependent on where the packaging is being produced. It would likely have a larger effect on specific regions than on global MHE manufacturing.

China was the largest producer of MHE in 2019, 4 times the size of the next biggest which was the USA (See Figure 3). 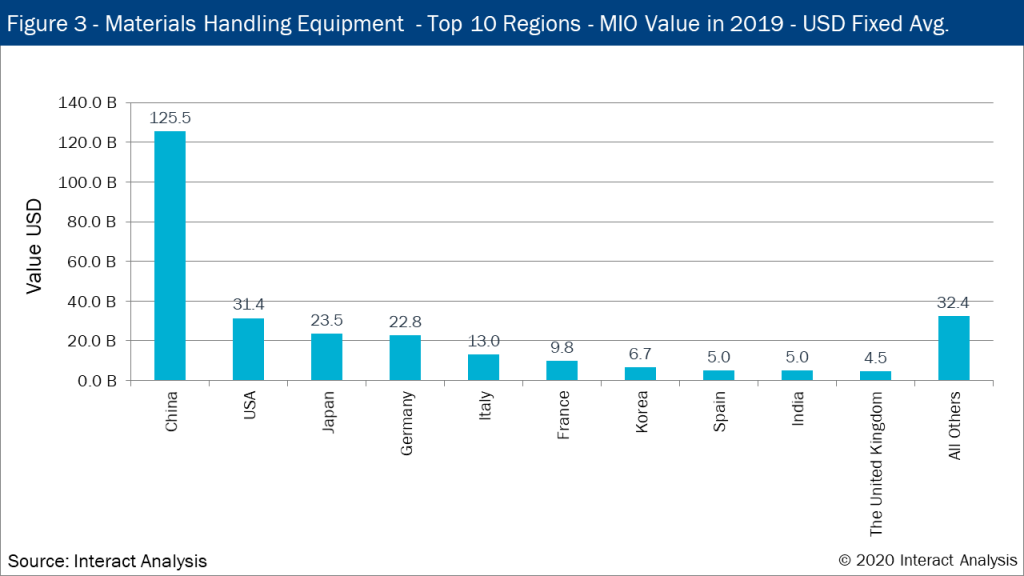 Glass production is a significant contributor to MIO industry production, it had a MIO value in excess of 290 Billion dollars in 2018 and the 07-18 CAGR for glass production was 6.2%. Historically it has been a healthy, growing industry and a move to more glass-related packaging products could drive further significant growth in the sector.  However, if we look at the Eurostat monthly production index (source) there was a different story in 2019.

It is quite clear that 2019 took its toll on the glass production market in Europe (See Figure 4). Germany was especially badly hit in the middle of the year, down in excess of 12% in May 2019 compared to May 2018. It may not be panic stations yet for the European glass production industry, but they may need to take advantage of the growing positive public sentiment towards sustainable production to ride out the storm of 2019. 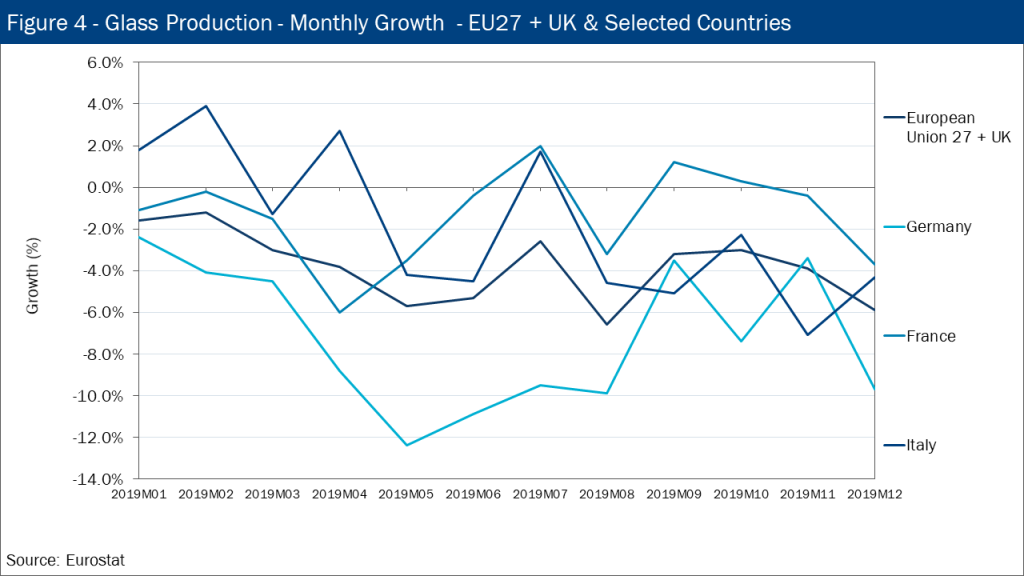 This article was co-written by Adrian Lloyd & Jack Loughney.