COVID-19 – How Will Global Manufacturing Output be Impacted?

The article takes the following issues into consideration:

A personal note from Adrian

“As technology analysts, our task is to make forecasts for the markets we cover, and in these unprecedented times our job becomes particularly challenging. Our normal economic assumptions are no longer relevant, and we’re forced to consider various short-term indicators to try to make sense of what is happening. At Interact Analysis, we are trying to do that by utilizing inputs from clients, our team, our partners and a whole host of secondary data to create a series of assumptions that we use to guide our thinking. Our insight is written with the intent of sharing these assumptions, which we hope will be useful intelligence for our clients and readership. Here are some of the main points.”

How will the spread of COVID-19 play-out in the months ahead?

Current thinking is that the number of infections we are seeing as a result of COVID-19 will continue to accelerate over the next two months and will start to be contained in regions that have been applying more stringent corrective actions first. By mid-August we predict that the fundamental problem of exponential infection growth will be resolved, and the number of new cases will be very low or near zero amongst developed economies.

This is not to say that by August, we can expect normality, as the process of preventing new infections and working this through the general population will be hugely disruptive for the vast majority of businesses, and will inevitably lead to a general recession in the global economy.

It seems that China, Taiwan and Japan have all been effective at halting the spread of the virus. What has happened in these regions in recent weeks has helped formulate our thinking. The main point here is that once a high-level of containment strategies is implemented, the uptake of new cases can be slowed and reduced over time. China appears to have almost entirely halted new cases being derived from within its own population. The fact that Wuhan is down to zero new cases for multiple consecutive days is a massive signal to the world that rigorous containment efforts work. The question is how quickly these efforts can be enacted elsewhere and to what extent.

When regions are proactive, we see that the timeline is about 8-10 weeks to halt the exponential growth of new cases. So, were a given country to implement aggressive action today, we could expect the spread of the virus to be contained by the end of May.

One final point on timing, and this is perhaps the largest risk to the forecast, is that we are assuming that once infection rates are reduced and controlled, this will remain the status quo. There is a significant concern that once containment strategies have been relaxed, and the virus has not been fully eliminated from a given population, it may start to resurface, and exponential infection rates could return. China is an important test case for this factor, as it is the first region to effectively drive new cases to close to zero and is now relaxing these strategies.

Projections for manufacturing in China, as the region recovers.

China accounts for nearly 50% of global production, and with global supply chains so integrated, a major concern among manufacturing companies is that the supply of critical components required to create finished goods and equipment has been compromised. Recently released data indicated a 13.5% drop in January/February compared with the same period last year, so clearly there has been some disruption. How long were manufacturing lines compromised? And how and when will this disruption manifest in global supply chains?

Our researchers on the ground in China, estimates that, at the time of writing, the vast majority of workers, perhaps 80-90%, have returned to their place of work. There are no official figures to confirm this, but our analysts have made a range of observations, and come to this conclusion. With the exception of workers in the Hubei province, we expect that by the end of the month all other provinces in China will have workers back to work as normal. It will take time for factories to return to full productivity, and we estimate that on 20th March, machines were running at about 50-60% of usual capacity. With the exception of Hubei, the prediction is that by the end of April factories will be back in full production and will be working flat out to make up for lost time. Our assumption is that Hubei will take an additional 4 weeks to return to normal. But Hubei only counts for 4% of Chinese manufacturing output, so its impact on the larger Chinese manufacturing economy is limited. But be aware that the region has a strong electronics and automotive sector, so these industries will feel the impact.

Our predicted 6-week disruption to the Chinese supply chain would clearly cause difficulties for the overseas producers on the receiving end of the supply chain. They will have to absorb the knock-on effect. But this disruption might in fact be reduced because some…perhaps many… of these producers will themselves be slowing down or shutting down, as the virus bites in the West. For example, Italy recently announced that non-critical plants had to close down for a minimum of 2 weeks, as the country battled with catastrophic levels of infection.

Our prediction of an 8-10-week disruption per region is sufficiently short that most developed economies should be able to survive this shock without a significant meltdown in core economic infrastructures, such as the financial markets. This ability to restore the economy to a semblance of normality is critical to minimizing the long-term impact of the Coronavirus epidemic and is another important assumption we are making in our own forecasts.

We work closely with ITR Economics, a consultancy, and use ITR’s data to inform manufacturing predictions. During the 2018/19 period, many regions experienced a slow-down in the economy. But a recovery, which had been predicted for some time by ITR was indeed beginning to show through. This meant that at the beginning of the pandemic, economies were sound, and in a fit state to recover from the current sustained shock. Looking back to the 2008/2009 recession, we believe that the 2020 slowdown will be nowhere near as severe. The situation back then was significantly complicated because it was caused by the financial industry. This had the effect of amplifying the disruption, as the banks which usually help economies weather periods of hardship were in a state of collapse and were incapable of doing so. Right now, the banking industry is in much better health than it was in 2008/2009.

The figure below shows our current assessment of what growth will look like for manufacturing output in 2020 and 2021, versus the forecast we published back in January. It is our intention to update this monthly, with the help of ITR data. 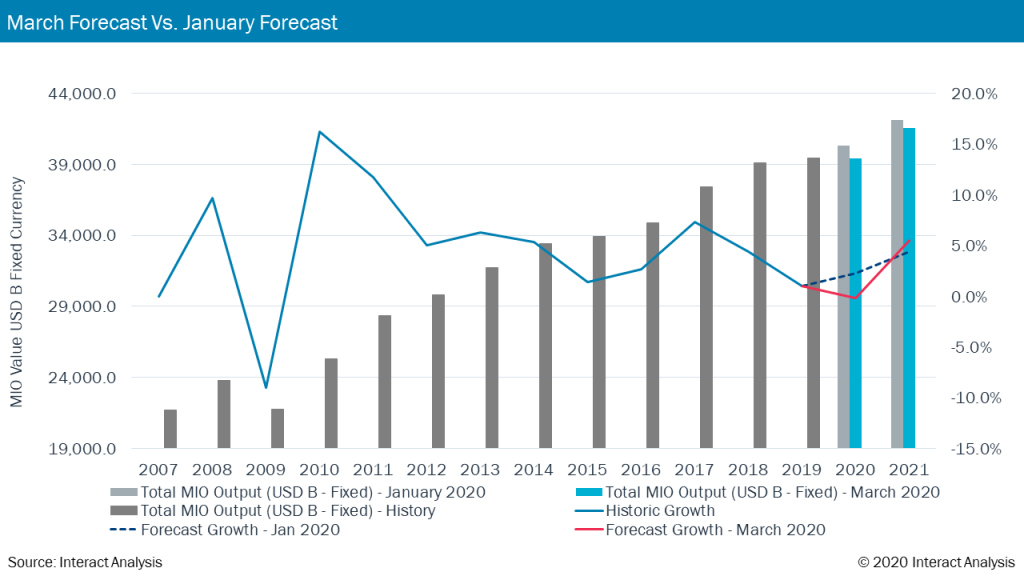 There are some key points to be drawn from this data table. We are not predicting a contraction of the level seen in 2009, at least in growth terms. The manufacturing economies around the world have nearly doubled in value since then, so a smaller contraction in growth terms still amounts to a substantial reduction in overall value. Our current estimates suggest over $950 billion in production value will be lost in 2020, although we are anticipating 2021 will recover some of the lost value, but not all of it.

Note that owing to the fluid situation we are in, we are only focusing on the critical 2020/21 period, whereas we would normally present 5-year forecasts.

We will be updating all our forecasts and reports as the days and weeks progress. Over the last week, we’ve put significant effort into looking into the potential effects of this crisis. And our CEO Adrian Lloyd has written a special, long-form article to summarise our findings so far in more depth.  Click here to read on.