If you’ve visited an industrial tradeshow in recent years, you will have surely seen the words IIoT, Industry 4.0, or industrial digitalization on nearly every booth at the conference. Big data has become the foundation upon which industrial automation providers are building new solutions and services. This comes as the rest of the economy also embraces big data as a mechanism for generating previously unattainable insight.According to the United States International Trade Commission, the amount of new data expected to be created in 2025 will be 175 zettabytes. This would represent a 146x increase from 2010 levels.

To support this increase in data, infrastructure in the form of data centers is continuing to be built and leased out to companies in need of server space. Research group Cloudscene estimates that there are 8,382 data centers globally and the continued growth in demand for data is pushing this number even higher. Data centers are very energy intensive operations and, as such, face constant pressure to reduce consumption. Equinix, one of the largest data center operators, consumed 7,140 GWh of electricity in 2021. Based on wholesale energy rates per MWh published by the International Energy Agency, this would put Equinix’s yearly energy costs at approximately $378mn which is over 10% of its cost of revenues.

Much of this energy consumption stems from the motors used throughout the facilities. Within data centers, motors are used in fan, pump, and compressor applications to help cool the servers which they house. Cooling is exceptionally important to data centers given the heat generating nature of servers, therefore each facility is equipped with robust cooling systems which can utilize air or liquid-circulation. Both methods require many motors to support the cooling process. The number of motors needed per data center can in some cases reach into the thousands. By some estimations, the motors used in these cooling systems can account for 30-40% of total energy use within the facility. Resultingly, data centers have been hyper-cognizant of the efficiency levels of their motor systems.

Data center operators have long hunted increased efficiencies in their motor systems. Historically, this meant utilizing IE3 or NEMA Premium class motors. These motor efficiency classes are defined by their performance across different powers and until recently IE3 and NEMA Premium represented the state of the art. This has changed, however, with improvements in motor technology and increased availability of IE4 and IE5 class motors, which are now offered by most motor vendors.

Unfortunately, when it comes to high efficiency motors (IE4 & IE5 or NEMA Super Premium), demand has almost always been legislation driven due to their associated premium price. For the Data center sector, it’s different; it represents one of the few sectors where there is significant demand for high efficiency motors coming from the end-users themselves. This has led the sector to become a testing ground for many new motor technologies as data center operators are especially motivated to reduce energy costs from their operations. 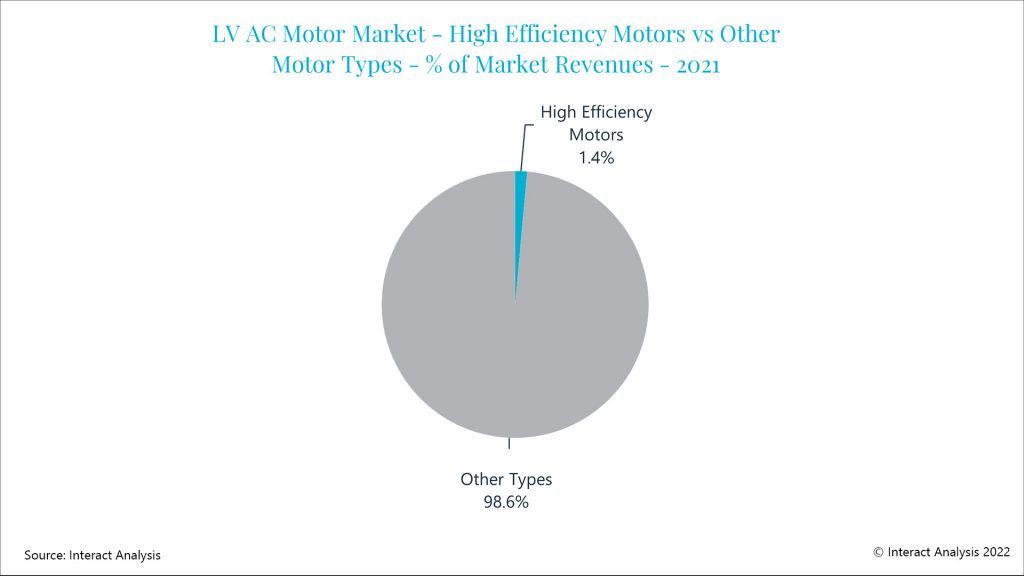 We estimate the number of high efficiency motors sold globally in 2021 to be approximately 300,000. When examined in this context, the number of motors sold to data centers becomes much more significant. As established motor vendors and start-ups alike look to sell and refine their high efficiency motor tech, it will be data centers who are among the earliest customers.

Most high efficiency motors are designed for variable torque applications like fans or pumps. There have been several startups which have developed novel technologies aimed at displacing the status quo within these applications. Infinitum for example, a motor startup who recently raised $80m in Series D funding, has developed an axial-flux motor which it claims addresses many of the shortfalls of traditional motors. In addition to improvements in efficiency brought on in part by its integrated variable frequency drive, Infinitum’s motor is significantly lighter and quieter. Both qualities are important in the context of cooling system applications, particularly when they are installed in the numbers often associated with data centers.

Established motor vendors are also developing new technologies to bring higher efficiencies to these applications. In 2020, the largest industrial/commercial motor vendor in the world, ABB, released its EC Titanium motor. This motor is a prime example of the emerging trend of greater integration between the drive and motor. Like Infinitum’s product, ABB’s EC Titanium contains an integrated variable frequency drive which helps achieve an efficiency level which surpasses the IE5 efficiency class threshold. While IE5 has yet to be officially defined by the International Electrotechnical Commission (IEC), it is commonly understood as achieving a 20% reduction in losses when compared with the officially defined IE4 class.

With any new product release, there needs to be early adopters utilizing the technology to work out the kinks before adoption begins en masse. Data centers appear to be one of these key early adopters for high efficiency motor technology. As new data centers are constructed, and existing ones look to retrofit new motor technology, expect the sale of high efficiency motors to grow. This offers motor vendors a sizable application to refine their technology and achieve some level of scalability ahead of the next round of motor efficiency regulations. 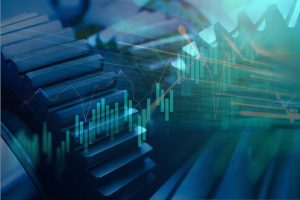 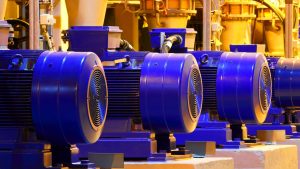