While many countries registered huge death tolls during the COVID-19 pandemic, South Korea has remained a beacon of good practice, its rigorous test, track and trace, and prevention and control measures ensuring that the mortality rate from the virus has been kept staggeringly low. In early March 2021, a full year after the first case was reported, the figure stood at fewer than 1,500 deaths. The authorities’ response was undoubtedly impressive, but changes in personal behaviour have also played their part, as they have across the globe, most notably where eCommerce and online shopping are concerned.

South Korea is forecast to be one of the largest markets for warehouse automation in the coming years. And the country’s early morning grocery delivery sector, a somewhat niche market not as yet replicated across the globe, has seen a significant increase in business since the onset of the pandemic, with industry experts last June revising the market value of the sector for 2020 upwards by 50% to 1.5 trillion won.

Though a relatively new arrival in the eCommerce sector, the early morning grocery delivery concept has hit the ground running in South Korea and has become a mainstream for many consumers in big cities such as Seoul. Typically, the service sees orders placed before midnight being delivered to the door between 3am and 6am the following day. This service was launched to cater for rapidly growing online grocery demand. And, with the emphasis firmly on speed and efficiency of distribution of fresh produce, it’s fertile ground for the automation industry.

The launch of Market Kurly in 2015 kicked off the early morning grocery delivery service in South Korea. It has been joined by SSG.com, Coupang and Lotte Super, and these four market leaders are rolling out logistics and distribution infrastructure across the country. In the short term, it is difficult for these companies to turn in a profit, but their longer term ‘Uber-like’ approach aims at progressively gaining market share as they scale up operations and achieve the efficiencies required to become profitable. Investments in automation are expected to increase significantly as private equity and venture capital firms fight to develop the most effective possible network of distribution centres.

Market Kurly currently operates three distribution centres in Korea and is set to open a fourth next year. Rather than profitability, the focus is on gaining market share by rolling out logistics infrastructure. The company claims to differentiate itself within the sector by selling premium products under its own Market Kurly brand name and prides itself on its cold-chain fulfilment structure. It is anticipated that the company will continue rolling out mainly manual distribution centres in the short term, as it has to date, but if the rising losses as a proportion of revenues the company has seen over the past three years continue, issues around variable labour costs will need to be addressed, and automation may well be the solution. 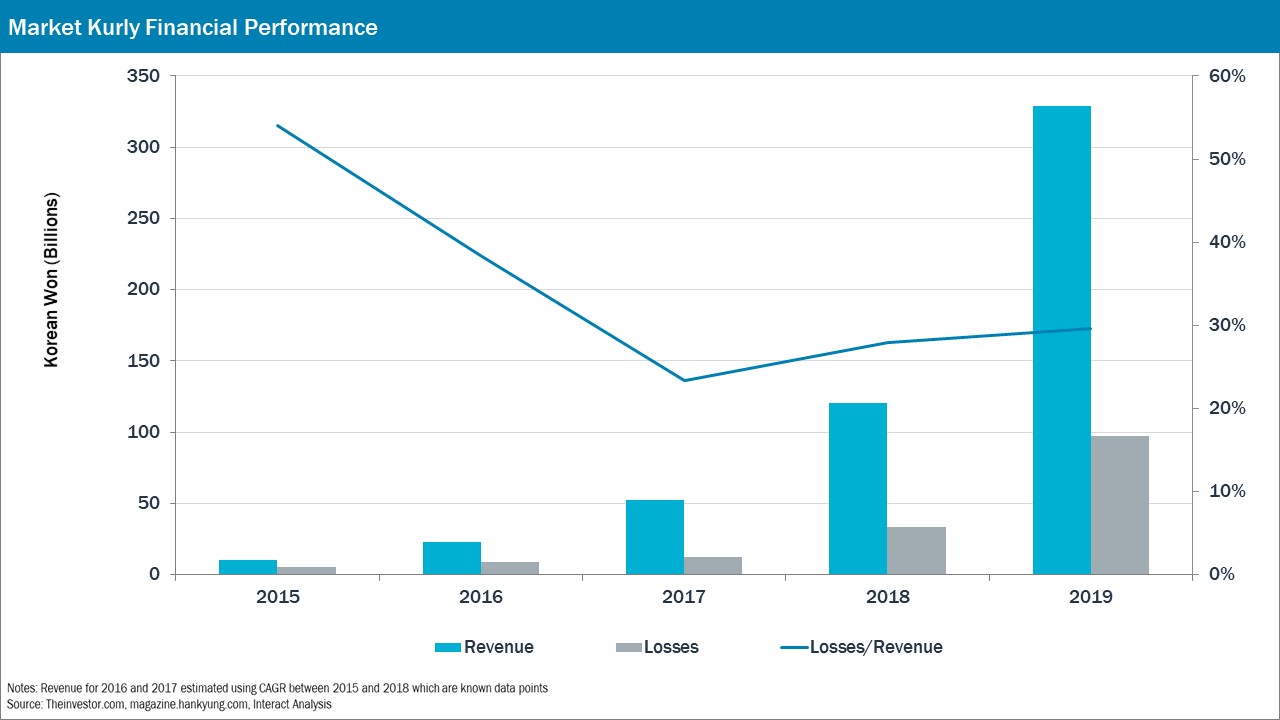 SSG.com on the other hand has used automated solutions in its early morning delivery strategy right from the very beginning. The early morning service operates out of its three NE.O distribution centres, the most recent of which, NE.O.003 is 3.5m sq ft and includes a bakery factory on site. The facility is more than 80% automated and uses G2P technology to process more than 2,400 orders per hour.

Coupang, known as ‘The Amazon of South Korea’, has rapidly become the leading eCommerce retailer in the country. Backed by SoftBank, it was established by businessman Bom Kim in 2010.

As a result of strong investment in warehousing and distribution infrastructure, Coupang was well prepared to succeed with the launch of its ‘Rocket Fresh’ dawn delivery service in October 2019, delivering 5,200 items to customers across Seoul. Coupang say their own research shows that 90% of Koreans now reside a ten minute drive from a Coupang logistics centre.

Finally, LOTTE Super – the supermarket arm of the Lotte Group – has a strong and growing focus on online retail. The company recently unveiled its post-COVID strategy to shareholders, a main thrust being to increase efficiency in its network of 15,000 stores. The case for automated fulfilment technology here must be strong, and it may be a particularly suitable target for micro-fulfillment automation technology.

Early morning grocery delivery is a booming sector in South Korea. Will it catch on across the globe? Could this be the next big thing for the automation industry? Regardless of whether it spreads globally, many warehouse automation companies around the world will likely want to get involved in this huge market in South Korea.

To continue the conversation about the global Warehouse Automation market, get in touch with senior analyst Rueben Scriven today: rueben.scriven@interactanalysis.com