Whilst passenger cars steal most of the limelight, electrification of commercial vehicles is equally, if not more interesting right now. You might be forgiven for thinking that Tesla is the only game in town with regards to electric trucks; however, with multiple product launches and new companies looking to disrupt the freight market, Interact Analysis has looked at what is driving this market and what some of the companies are doing in this space.

Whilst emission standards at a national level drive much of the move to electrification, an overlooked factor is what individual cities are doing to reduce local air pollution and noise levels to improve the quality of life for residents. Megacities like London, Paris and Shanghai down to smaller, regional urban areas are looking to impose strict limits on the types and operations of polluting vehicles, including outright bans in the future. Often these rules are ahead of the overall national framework.

When the trend toward urbanisation is coupled with a city trend toward lower emissions and the proliferation of ecommerce, it makes a huge amount of sense for commercial vehicle manufacturers to offer fully electric, urban delivery vehicles. With more people living in cities and more people purchasing goods online, there is a greater need for smaller, urban delivery vehicles. To meet this demand in a way that doesn’t exacerbate the current emission problem, fully electric vehicles have an attractive value proposition.

However, fleet operators are always posed with an array of technologies that can improve fuel usage. With improved aerodynamics, platooning and new engine technologies all on the wish list, vehicle electrification may take a back seat whilst operators prioritize investments into other technologies.

One challenge the industry faces is early adoption. Electric and diesel hybrid trucks are, typically, more expensive than their internal combustion equivalents. Whilst large fleets owners may be willing to experiment with the technology and invest more upfront to reduce OPEX, smaller fleets or single operator/owners may struggle to finance the higher upfront cost. If urban areas push to reduce the use of polluting diesel vans and trucks, they may need to consider financial support in the form of subsidies for small fleet operators.

One design approach that OEMs are employing to improve adoption of electric vans is a modular battery design. The Iveco Daily Electric, as an example, offers three different battery sizes that can be used depending upon the chassis size and the owner’s requirement for range and payload. This gives owners the flexibility on price/performance and may lead to more early adoption.

There are several start-ups and incumbent players that are actively developing or selling vehicles (and technologies) for the electrified commercial vehicle market. Here’s a brief overview of what some of the companies are doing:

Daimler’s various truck and van brands have a strong play in electrification. Most recently the full electric Fuso eCanter was launched, with units already operational in Japan and the US. This vehicle is squarely aimed at the light duty, urban delivery market. The Mercedes Benz brand demonstrated a “vision van” at CES 2017, complete with electric powertrain, automated loading bay and delivery drones. This is a pre-cursor to the launch of the eVito in 2018 and the sSprinter in 2019. By 2020, in concert with Hermes, Mercedes plans to have 1500 electric vans as a part of a trial delivery service in Hamburg and Stuttgart.

Based in the UK, Arrival Trucks (formerly known as Charge) is an electric truck manufacturer backed by VC fund Kinetik. Arrival is one of many start-ups looking to capitalise on the growing demand, particularly in urban areas, for small, quiet and non-polluting commercial vehicles. Its vehicles will be designed and built in the UK and are expected to be equivalent in price to similar diesel-powered vehicles.

In August 2017 Royal Mail and Arrival jointly announced that they will trial nine electric range-extended vehicles in London. Three six-ton trucks will be followed by three 3.5 ton trucks and three seven-ton trucks. The vehicles will have an electric range of 100 miles before switching to range extended mode. The London trial is designed to be a testbed for the vehicles and technology, ahead of a production expansion.

Based in Sweden, Einride describes itself as a ‘systems creator’ that uses electric batteries and self-driving technology to provide sustainable transportation. Its first vehicle – the T-Pod – is designed to carry 15 standard pallets over 200km on a single charge. The aim is to reduce operational costs (no driver, increased operational hours, lower running costs) whilst reducing the environmental impact of freight. By 2020 Einride wants to have a completely emissions free transportation corridor in Sweden, carrying 2m pallets per year (Einride claims to already have customers for 60% of this capacity).

In August 2017 Cummins introduced the Aeos concept, a class 7 all electric truck. Cummins will not manufacturer the truck itself, rather it will sell the underlying technology to truck OEMs, with production likely to begin in 2019. Cummins, a major player in the diesel engine market, is making clear that it intends to have a prominent role in electrification in the future.

Based in the US, Thor Trucks is a transportation start up focused on electrifying fleet operations. Currently in demo/testing mode, Thor is aiming to enter production in 2019. It’s first vehicle – the ET-One – is designed for short and regional haul applications. Its based on a Navistar chassis and electric motor from TM4.

StreetScooter is a subsidiary of Deutsche Post DHL Group that manufactures electric vehicles for urban delivery applications. Having already delivered over 1,000 vehicles, StreetScooter is ramping production to over 10,000 per annum with the plan to replace all Deutsche Post’s fleet with electric vehicles. The vehicles will also be made available to other organisations to purchase.

We wrote about the Tesla Semi truck here in some detail. Since it launched, Tesla has reported numerous pre-orders for its truck from large fleet operators. Whilst a positive for the nascent industry, the optimism should be tempered – the order volumes are small by comparison to the total fleets they will be joining (making the orders a trial more than anything) and Tesla still needs to deliver a rugged, quality product on time. No mean feat.

To the general public at least, BYD is not a familiar brand. However, in the electric vehicle market, BYD has been very successful, particularly in its home market of China. With a range of electric cars, buses and trucks, BYD is well positioned to exploit the electrification trend. BYD recently opened a production facility in Canada to assemble electric trucks. It also has a rapidly growing facility in the US, supplying electric waste trucks amongst other vehicles to the US market.

In October 2017, VW announced a $1.7bn investment for its truck and bus division for, amongst other technologies, electric drivetrains. A new electric truck for North America will be based on a Navistar vehicle and aimed at the class 6 or 7 urban delivery market. Volkswagen is also testing nine electric trucks in Austria. A battery-powered truck called ‘e-Delivery’ will also roll off assembly lines in Brazil in 2020.

In 2018 Isuzu plans to launch an electric light-duty truck based on its N-series truck. It will be aimed at waste collection and light shipping applications.

Nikola has focused on hydrogen-powered vehicles, making it different to many of its competitors in this space. The usual arguments against hydrogen fuel can be made – high-cost technology, limited/complex refuelling stations, debatable ‘green’ credentials if using ‘brown’ hydrogen, etc. However, this hasn’t stopped Nikola from developing a hydrogen-fuelled semi-truck with phenomenal range and hundreds of pre-orders from US fleets.

Volvo announced it will bring electric trucks to the roads in 2018 to selected pre-existing customers, with general sales following in 2019. Its aim is to start with medium duty trucks in Europe for urban distribution. The vehicle will be based on existing hybrid and electric technology developed for vehicles and buses since 2010.

Hyliion, which raised $21m in VC funding in September 2017, is developing a hybrid system for diesel trucks. In short, Hyliion has developed an electric axle (e-axle) to reduce fuel consumption. It can be installed on new vehicles or retrofitted as an aftermarket solution. By using precise map data, the e-axle can intelligently assist a vehicle up slopes to ensure the engine stays in its optimal range. When traveling downhill the e-axle can recharge the battery through regenerative braking. Furthermore, when a vehicle is stationary the cab can be powered by an APU so that the engine doesn’t need to idle, significantly reducing fuel consumption.

Tevva is a UK based firm focusing on electric range extended vehicles in the 7.5t to 14t weight category. Its solution is applicable for both new vehicles and as a retrofit. One of its vehicles has had road trials with UPS.

The first graphic highlights the weight of each commercial (kilograms) vehicle versus its claimed maximum range (the size of each bubble is the stated battery capacity of the commercial vehicle in kWh, helpfully listed next to the name also). Explanatory notes/assumptions are listed below the graphic. The second graphic highlights the carrying capacity (where known) versus the maximum claimed range.

The ‘traditional’ OEMs are, to a large extent, focusing on all electric light duty vehicles – typically vans or small trucks for urban deliveries. This make sense given the likely demand in this segment and their ability to make use of technologies developed for the passenger car market. The challenge will come from differentiating against the competition (there are already numerous vehicles in this segment) and persuading small fleet operator to make the move away from diesel.

As vehicles get larger, so does the battery. This reduces the carrying capacity of the vehicle and simultaneously increases the purchase price. Whilst Tesla stands out in terms of weight and range, it will be interesting to see what it sacrificies in terms of cargo capacity to support the need to carry a very large battery. Even as electric trucks get larger it is our opinion that they will still be limited to point-to-point routes between relatively close urban areas.

The Peterbilt demonstration waste vehicle stands out as it has a very large battery for a relatively small range. In this instance it requires a larger battery to power the crusher/lifter mechanism. This will be a challenge for vocational vehicles, particuarly if they too are required to be fully electric for urban operation.

It is very interesting to note the impact that packaging, battery energy density and vehicle design has on overall carrying capacity and range. Volkswagen and Daimler appear to be approaching the range and carrying capacity of BYD vehicles with much smaller batteries. 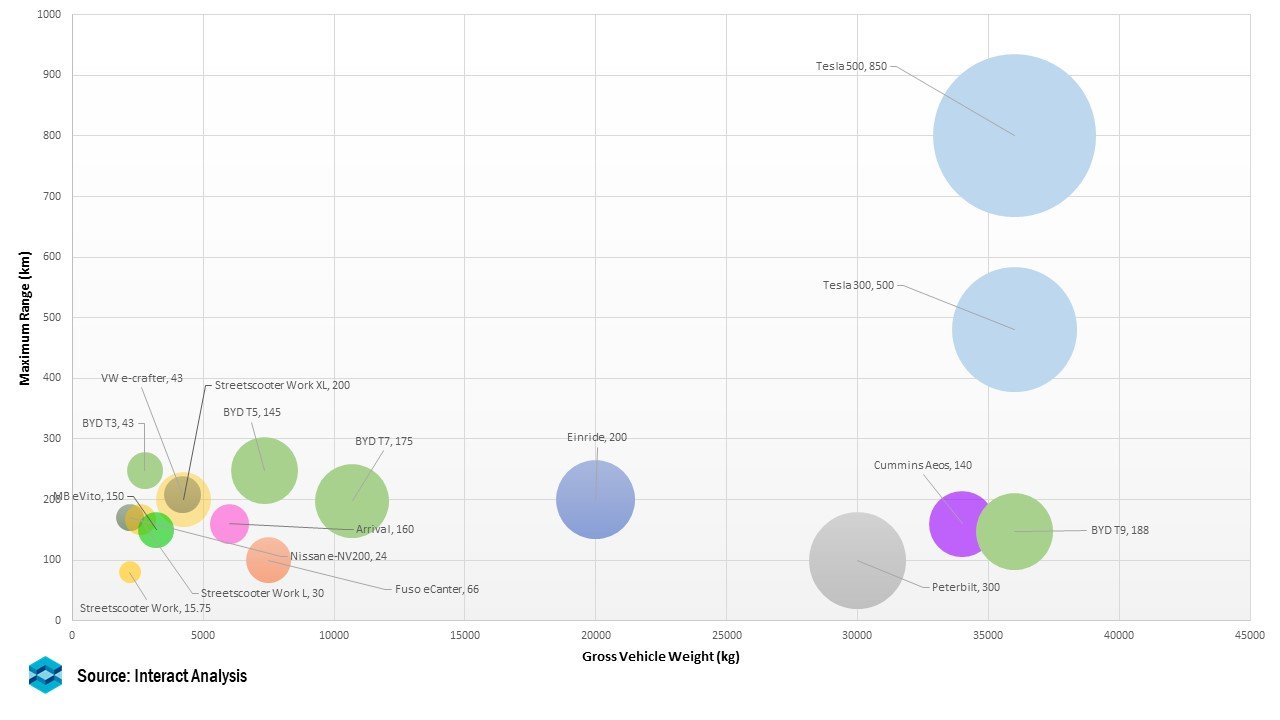 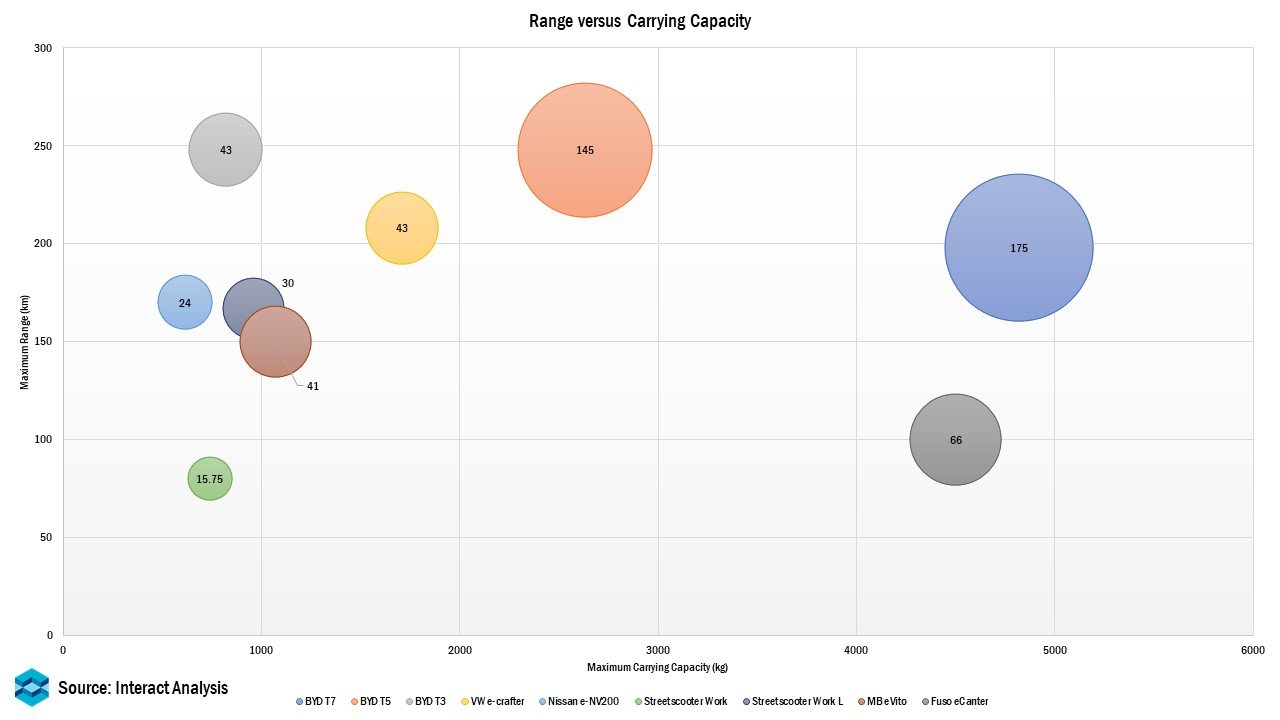 There is a huge amount happening in the electric truck market now. Given the focus on improving air quality in urban areas, light duty vans and trucks will be the first to move toward full electric operation. This is where the majority of OEMs are focusing their attention, but competition will be tough. With Tesla being a notable example, several companies are looking at electrification for larger trucks. The challenge here will be in persuading fleet operators about the return on investment and being able to offer comparable freight carrying capacity. We expect volumes of electric trucks and vans to grow rapidly over the next 3-5 years, with tens of thousands of electric vans and trucks likely to be shipped from 2020 onward.