The off-highway vehicle market in North America has developed a long-lasting relationship with the diesel engine over the past 100 years, with seemingly inseparable bonds. This bond is not surprising as North America has large oil reserves which have, along with low tax policies, helped pump prices remain lower than many other countries. Furthermore, the powerful (and above all, diesel) construction machine is iconic – symbolizing many of the quintessential characteristics of the US, for example – graft, independence and strength.

Despite the comfort of an old relationship, there is a strain coming from zero carbon goals and a new age of sustainable business practices. Over the past few years, electric vehicle options have flourished in the consumer vehicle market which has opened doors for massive battery production and manufacturing innovation. With improvements in these categories, electrification is beginning to look like a cost efficient and viable option in the off-highway market for many machines. For electrification adoption in the North American construction market to take off there are several factors that will influence this energy transition. Legislation, price parity, and operational performance of batteries will be imperative. In this insight I take a deeper look at the North American market as it pertains to construction equipment.

So, how can we make this fairytale a reality?

Both United States and Canadian politicians have generally taken a hands-off approach with regards to the energy transition. However, in recent years, both countries have outlined plans for emission reductions that bolster the attractiveness of electric vehicles. By passing laws or regulations against greenhouse gases, governments can increase adoption rates by taxing carbon or providing rebates for switching to more fuel efficient, cleaner options. Canada imposed a Carbon Tax in 2018 which in 2022 has risen to $50 per ton of CO2. While a carbon tax has not been imposed in the United States, the new “Infrastructure Investment and Jobs Act” provides billions of dollars in funding that supports electric vehicles such as battery research and energy infrastructure such as charging stations. Legislation is the most integral component of fast adoption because it provides funding for programs and rebates that will bring down the cost of these technologies and improve their operational performance.

As Pink Floyd Once Said “Money – It’s a Diesel”

Pink Floyd really said “Money – It’s a Gas.” but for the sake of North American off-highway machinery let’s pretend they said diesel. Companies in North America have saved money in the past operating diesel-powered machinery. So, through the lenses of North American companies, money truly is a diesel. Price parity can be defined as the breakeven point where electrification becomes competitive with other fuels from an economic perspective. This breakeven point is where companies will begin to see electrification as a chance to save money as well. Lithium-ion batteries have shown an 89% decrease in cost from 2010 to 2021, according to BloombergNEF. The cost of a lithium-ion battery for an electric vehicle passenger car in 2010 averaged over $1,000/kWh and in 2021 the average was just over $130/kWh. The main driver for decreased battery cost is the increased production capacity that batteries have seen on a global scale. Batteries in the off-highway vehicle market have not become as cheap as the on-highway, consumer vehicles but they are following equally impressive pricing trends.

Let’s dive into electrification trends specific to the excavator market in North America. Based on our own extensive research in our 2021 Powertrain Pricing and Architecture Report, battery pack price per kWh is expected to decrease by over 50% in the mini and small excavator markets. Medium and large excavator battery packs take longer to show up on the scene, but their price/kWh follows the same trend of decreasing cost. 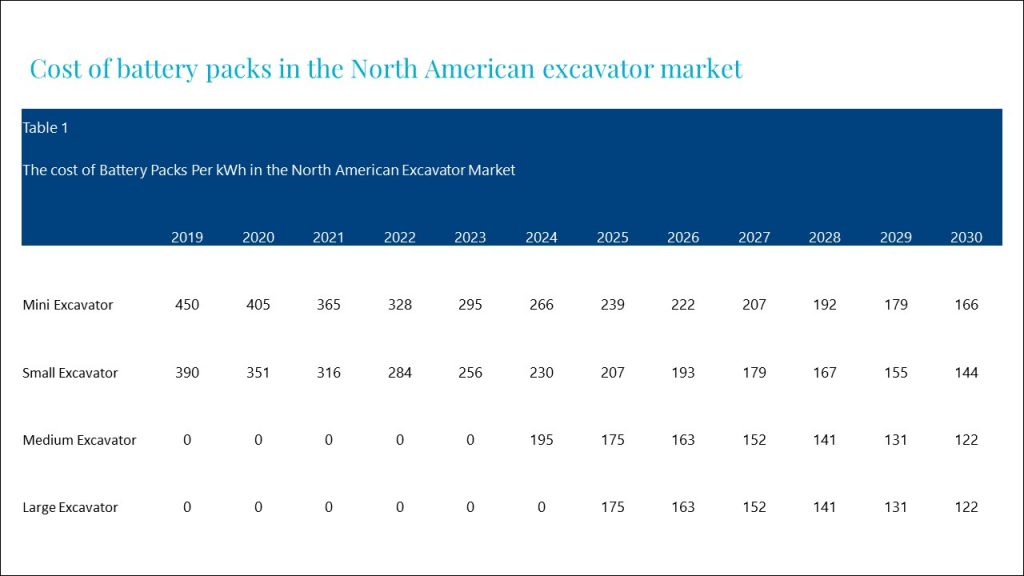 Cost of battery packs are decreasing in the North American excavator market because of the increase of battery production.

The global Li-ion battery industry has entered a second production expansion cycle with a lot of investment located in North America and Europe. Short term issues such as a rise in the price of raw materials and increasing battery manufacturing equipment will cause a short-term increase in battery cost. As water passes under the bridge, we can expect battery costs to continue trending downward.

The last key limitation of the electrification is the operational performance of the batteries themselves. This remains an issue for larger vehicles that have longer duty cycles and have a higher operating range, but it seems as if batteries have found their niche for now. Vehicles that are located at a static site and have shorter operational times are the perfect candidates for electrification because productivity of the vehicle is not compromised. Mini excavators, wheel loaders, small tractors, and smaller mining equipment are quickly being electrified by many different vendors. As seen in the graph below, electrification can be viewed on a sliding scale of two variables: operating range and duty cycle.

Visually, electrification can be conveyed on a scale of Duty Cycle vs. Operating Range

Right now, it’s crucial to understand how to electrify all vehicles on-site as opposed to just the vehicles that fit the criterion. On May 17th, 2022, Caterpillar announced that their prototype mining trucks will be unveiled this year and set to be in full production by 2027. Diesel powered trucks are the cause of 60-80% of all scope 1 site emissions. Replacing these trucks on-site will reduce emissions while pressuring other vendors to electrify their larger vehicles.

Legislation, cost of batteries, and battery performance improving are building a strong foundation for the off-highway vehicle market to move into a more efficient future. A government push for emissions reduction could help electrification undergo an economies of scale transition which would increase alternative fuel innovation and in turn lower the cost of batteries. Increases in technology and economies of scale in battery production will allow vehicles with longer duty cycles and more remote operating sites to become electrified as well. The new administration has passed important acts in the United States that promote the growth of electrification. While there is more work to be done in North America before electrification truly takes off, the tides are clearly turning.