In early 2018, with the help of our Manufacturing Industry Output (MIO) Tracker, as well as our research partners at ITR economics, Interact Analysis accurately predicted a 2019 manufacturing industry downcycle. For us, this showed the value of the MIO – a unique and highly complex market research study that accurately forecasts the entire global manufacturing industry at a granular level, looking at 16 industry verticals, such as automotive, textiles and printing, as well as 19 machinery sectors, across all world regions.

We’ve now enhanced the MIO, with a new update giving it a truly global outlook by adding key new regions including India and Korea, as well as incorporating vastly more information on the Chinese market. The incorporation of Korea and India – two of the biggest economies in the world – means that the MIO now covers over 95% of global manufacturing. The result is an even more accurate snapshot of the global manufacturing economy.

A window into global manufacturing

At a regional level, the newly enhanced MIO shows that Asia has significantly gained in its share of total global manufacturing industry output compared to all other regions since 2007 (see Figure 1). And this trend shows no sign of stopping. China is the biggest manufacturing player globally, accounting for 46.5% of the total value of all regions (up from just under 25% in 2007). Our report gives uniquely detailed insight into the Chinese manufacturing sector where the building pressure of the economic downturn has been coupled with uncertainty caused by the Sino-US trade war. 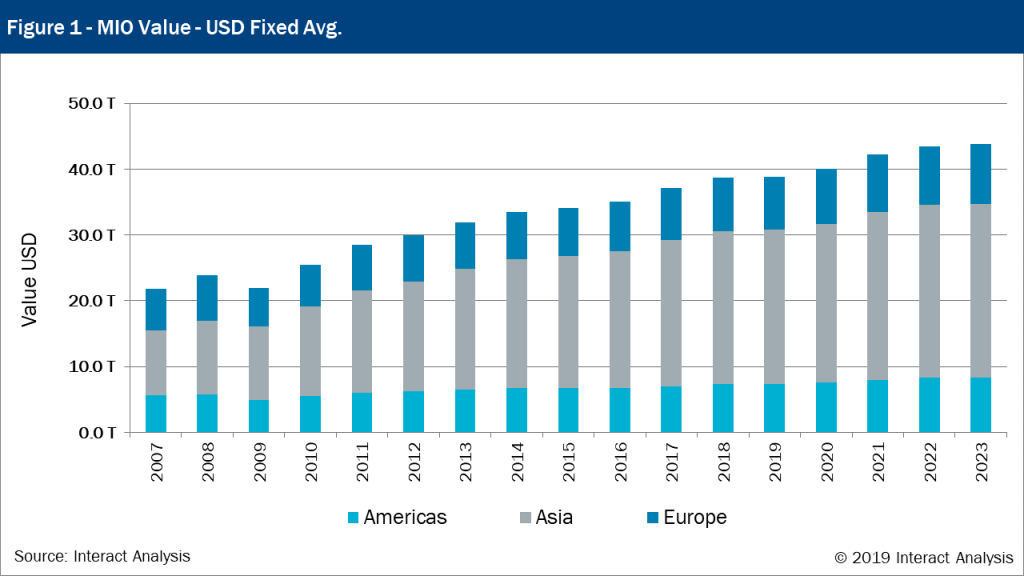 In fact, political tensions are a major brake on growth in most regions. These include Brexit, the uncertainties caused by President Trump’s tendency to implement or threaten tariffs (most recently against Mexico) and President Modi in India. Modi, who recently unexpectedly won re-election with a landslide majority, has strong and unpredictable protectionist instincts. For example, in February, India unilaterally raised tariffs on all imports from Pakistan by 200% and revoked the country’s most favoured nation status.

At a deeper level, the MIO tracker looks at industry production (what is made) and machinery production (the machines that are used to make it). At the industry production level, with the addition of India and Korea to the MIO, metal production has shown itself to be the dominant global industry (just under $500bn dollars larger than food and beverage production in 2018). Meanwhile, the rise of the digital economy is hitting printing, and pulp & paper production hard.

Machinery production is around 5% of global manufacturing output, and this ratio is not expected to change radically. Machinery sectors are defined as: dedicated machines – built for use in one specific manufacturing industry (e.g. food & beverage machinery), where rapid growth is currently expected to falter in many key industries. Multi-industry machines designed for a specific application but used in multiple industry verticals (e.g. machine tools), where material handling and packaging machinery are forecast to be the fastest growing sectors, both benefiting from a strong consumer trend to online sales of delivered goods and increasing automation of warehousing and logistics applications. And non-manufacturing machines, which are not used for manufacture of goods, where HVAC and generators and generator sets represent the largest sub-section of this industry.

The objective in creating the MIO is to ensure primary manufacturing data is available in an interactive and accessible format for industrial companies to use in their own planning and forecasting activities.

The new enhancements to the report include a set of Microsoft Power BI Dashboards, allowing unparalleled access to enter and manipulate our dataset. The Power BI format allows the user to switch between currencies at will, and to drill down through different categories to analyze behaviour at different levels of granularity with ease.

Some final thoughts on Brexit for industry leaders

We’ve historically held the view that Brexit will either be cancelled, indefinitely delayed, or be so “soft” as to be barely noticeable. But with recent political events in the UK appearing to indicate that a more hard-line Brexit-supporting leader is likely to take over as UK Prime Minister, it does appear that a Brexit with “no deal” or with only basic trade arrangements in place, is increasingly likely.

A leader such as former Foreign Secretary Boris Johnson in a hard-Brexit scenario is likely to try to mitigate the impact of a partial loss of access to EU markets by enacting major tax cuts and deregulatory reforms for business – in an attempt to turn the UK into the “Singapore of the North Atlantic”.

For industrial companies either producing or selling into the UK market, the impacts of this would be dramatic and unpredictable, and would carry both positive and negative consequences. In such a scenario, we will make significant revisions to elements of our MIO forecasts, and as such the next two months are a uniquely critical time for the European economy.