A Decade After the Financial Crisis, Has EU Manufacturing & Machinery Recovered?

Total EU manufacturing production peaked in 2008, at a little over €4.9 trillion, before the effects of the financial crisis were seen. What happened next was ugly.

Warning: count(): Parameter must be an array or an object that implements Countable in /home/customer/www/interactanalysis.com/public_html/wp-content/plugins/ultimate-author-box-lite/inc/frontend/uap-shortcode.php on line 80
style=”display:none;”> 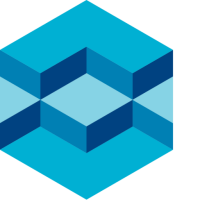 Total EU manufacturing production peaked in 2008, at a little over €4.9 trillion, before the effects of the financial crisis were seen. What happened next was ugly. Demand reduced in 2009 by nearly 20% lowering production by almost €1 trillion. To contextualize the extent of this fall, it has taken seven years for production (in unadjusted terms1) to surpass 2008 levels. 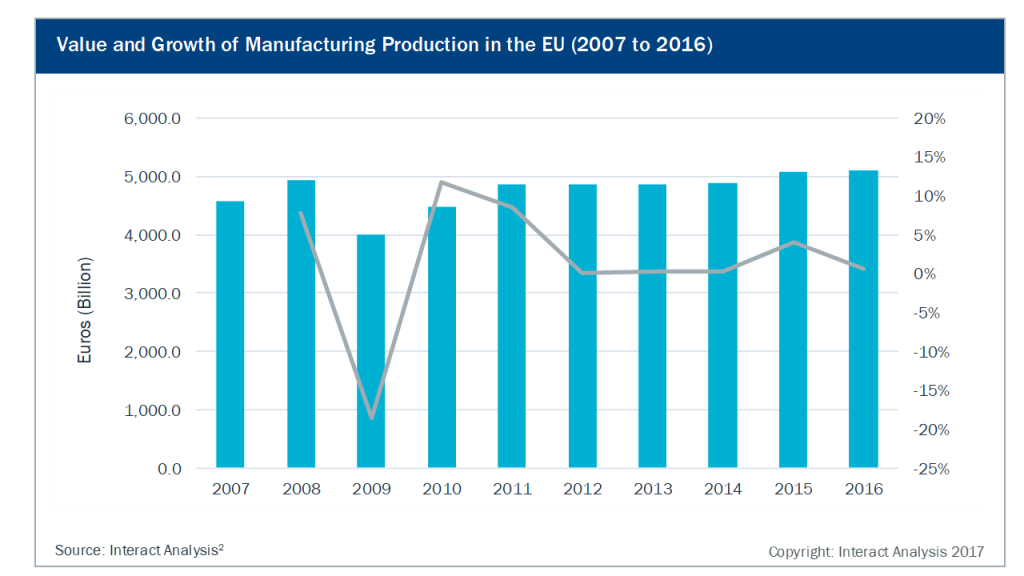 The sluggish recovery is interesting to note, since 2011 production was very close to peak 2009 levels. But in 2012 growth stalled and output remained flat for several years after. What contributed to it finally surpassing 2008 levels in 2015?

To shed light on this question, a closer look at key industries is helpful. Comparing the relative sizes in 2007 and 2016 for 16 main verticals, we have identified those industries that expanded during this period. The biggest winner was the aerospace industry, which nearly doubled in size. However, aerospace is a relatively small portion of total production, and its growth profile over the last 10 years has been one of steady and consistent growth, so our answer lies elsewhere. 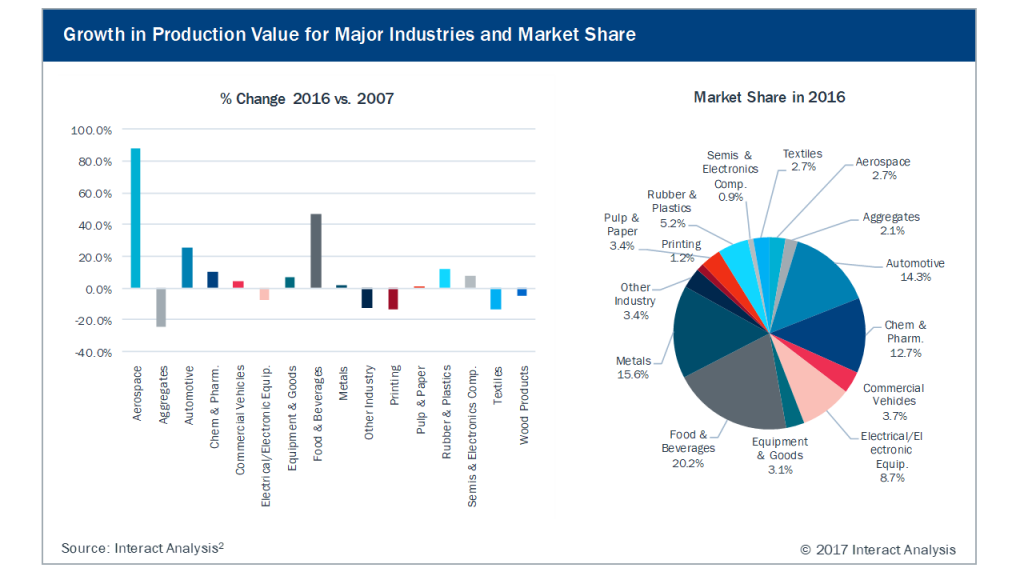 Growth in Production Value for Major Industries and Market Share

Not all industries have fared so well and clearly certain ones show characteristics of maturity, or reflect the challenge of competition from overseas production. For example, textiles has declined steadily across the last decade in Europe, losing 13.5% of production value over the period. Overall demand for textiles is unlikely to be shrinking, as like food & beverage, it is heavily linked to population growth, so one can infer competitive imports are hurting. The printing industry also saw a similar level of contraction; however, the challenges facing traditional paper media – a key consumer – are well documented and an ongoing contraction here is not surprising. When we finalize our global picture shortly, we anticipate seeing a contraction here in general.

How Have Machinery Markets Fared?

Machinery markets are an important target area for manufacturers of industrial equipment and the wellbeing of this sector is of major interest to these companies. Unsurprisingly, machinery production also saw a substantial contraction following the financial crisis in 2007/2008, with 2009 production dropping by over 20%. In contrast, however, the recovery was quicker. Pre-recession levels were surpassed in 2011, achieving a record value of €338 billion. 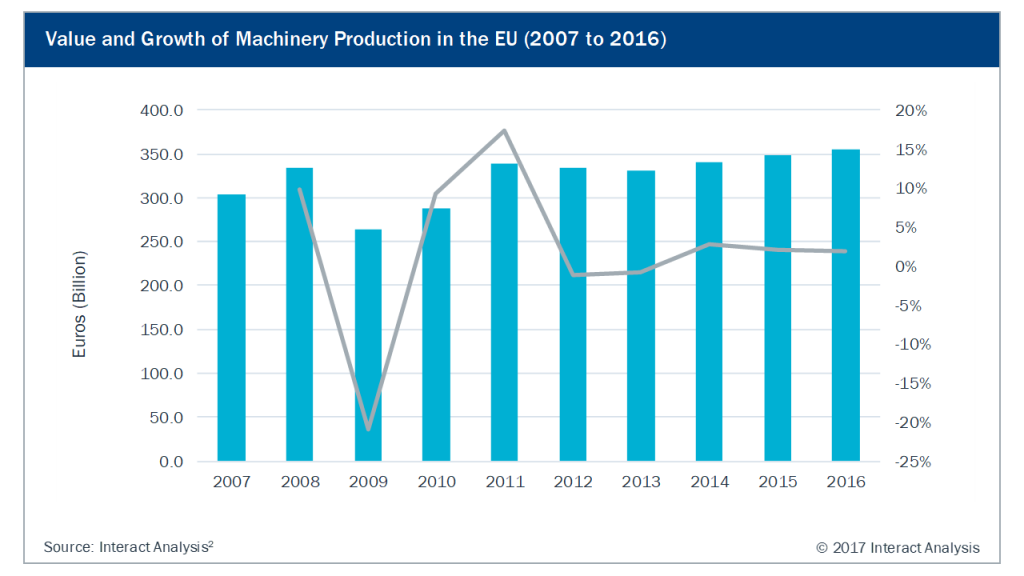 Following the recession, machinery demand dropped far more sharply than manufacturing demand, reflecting how a downturn affects machinery builders to a greater extent. Depending upon which sector you are in this can be especially problematic; for example, during 2009 machine tools, mining machinery, printing machinery, rubber & plastics machinery and textile machinery all contracted by over 30%! Over the last few years, growth for machinery production has picked up to slightly above average levels, suggesting steady investment from the manufacturing sector. Given the steady-state of the industry, this tends to imply manufacturers are cautiously optimistic for continued growth in the short-term for EU countries.

Look for more coverage on manufacturing markets in the weeks ahead as we publish similar views on the Americas and APAC regions, before publishing our forecasts for future performance.

The above analysis is taken from a new Interact Analysis report – “Manufacturing Industry Outlook – 2017” – which will be publishing shortly.