Baggage handling Systems: a major casualty in the pandemic, but still occupying by far the biggest market share 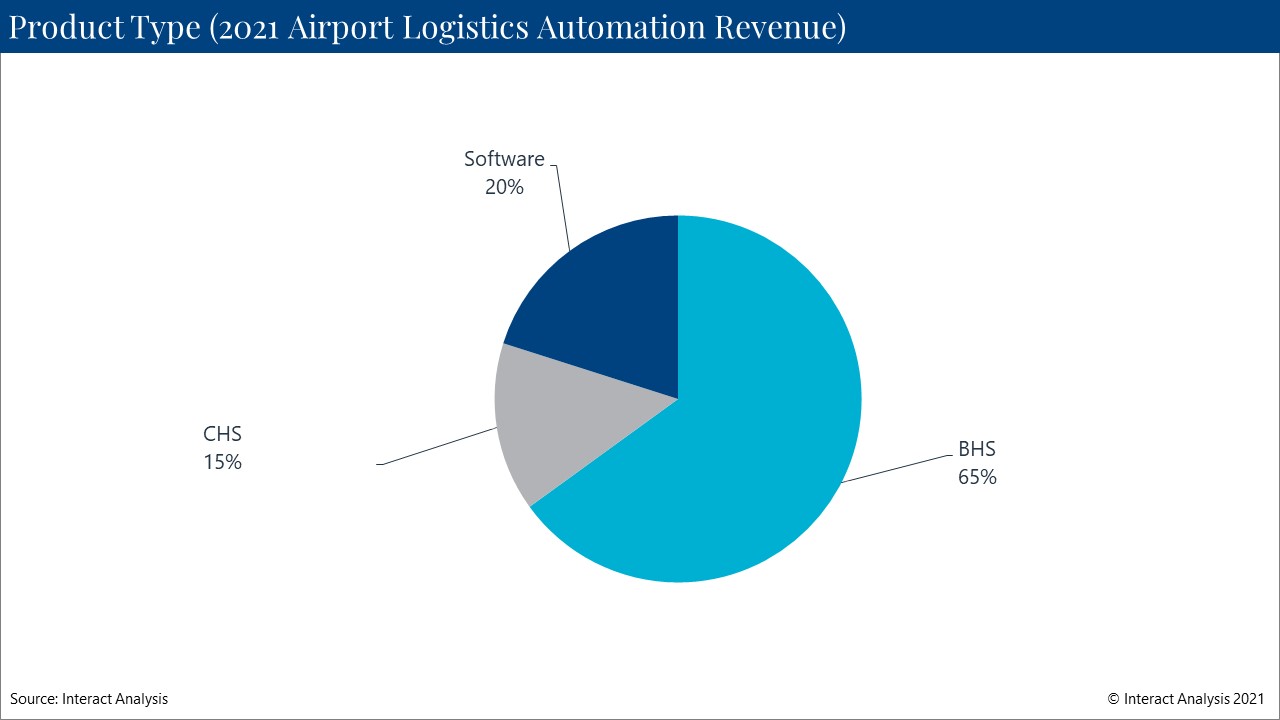 Cargo handling systems are expected to see a faster increase in revenues than baggage handling systems, which were the main casualties of the pandemic, whilst the increase in digitization, and the growing interest in data analytics and simulations, means that the software market will also see steady but sustained growth.

In many cases, individual companies specialize in one or two of these three segments, but there are some big players who offer all three solutions. Top of the list are Vanderlande, Siemens, Daifuku and Beumer,who in 2020 accounted for 20%, 19%, 15% and 12% of the total market respectively; a combined total of 66%.

The same four companies dominate the BHS market, with Vanderlande taking top spot with a 25% share, followed by Siemens, Daifuku and Beumer. Their aggregated market share – a massive 82% – underscores their position as market leaders. Further down the league table are a host of smaller companies, with the Civil Aviation Logistics Technology Co (CALTCO) taking 5th position with a 6% share, and Alstef at 6th position with 2.5%. The gap between the top 4 and the rest is significant, and we are more certain about our numbers for the ‘Big Four’, owing to the availability of publicly reported data from the companies concerned. Lower down the rankings, we present estimates, rather than concrete figures. The top four companies are even more dominant in the US and Europe than they appear in this table, to the extent that it is difficult for other suppliers to elbow their way in and make successful bids on the largest projects. Siemens, Vanderlande, Daifuku and Beumer account for 90% of the biggest projects currently ongoing in Europe. Meanwhile, Daifuku is the market leader in Australia and New Zealand.

The picture in China is different, where the domestic company CALTCO dominates, and other local suppliers also take significant share, in spite of the still strong presence of international companies. CALTCO, which almost solely serves the Chinese market, has recently won some major baggage handling systems automation projects in China, including Daxing Airport, Chonqing Airport, and Tianfu Airport.

Where cargo handling systems are concerned, One or two large automation projects can have a significant impact on the market share. This means that leading suppliers in the sector can vary from year to year. Our current estimates put Lodige, Saco, CIMC-TianDa and Siemens in the top four positions. However, again owing to a lack of public data for this sector, our report can only offer estimates of approximate market share for these companies.

There is a noticeable domestic element where cargo handling systems suppliers are concerned, with many smaller local companies bidding for projects. Lodige (Germany) and Saco (Netherlands) are leading suppliers in the Western hemisphere, whilst CIMC-TianDa (China) is the market leader in China, where it has equipped cargo terminals at major airports such as Guangzhou, where China Southern Airlines Cargo warehouse has an annual throughput capacity of 800,000 tons (when it was installed, this was the largest in China and estimated to be the third largest in the world).

Software: systems integrators trying to corner the market, but Brock bucks the trend

System integrators Vanderlande, Beumer and Daifuku, companies which often sell hardware and software together, dominate the software market. This is in spite of the concerns voiced in some quarters that this approach means customers are tied into vendors when they want to upgrade hardware, having invested in the dedicated software. The only specialist software company (i.e. that doesn’t also sell automation hardware) in the top four is Brock Solutions, which is performing particularly strongly in North America, where a sales rep from a supplier of materials handling solutions told us “Brock has really carved out a niche for themselves”. 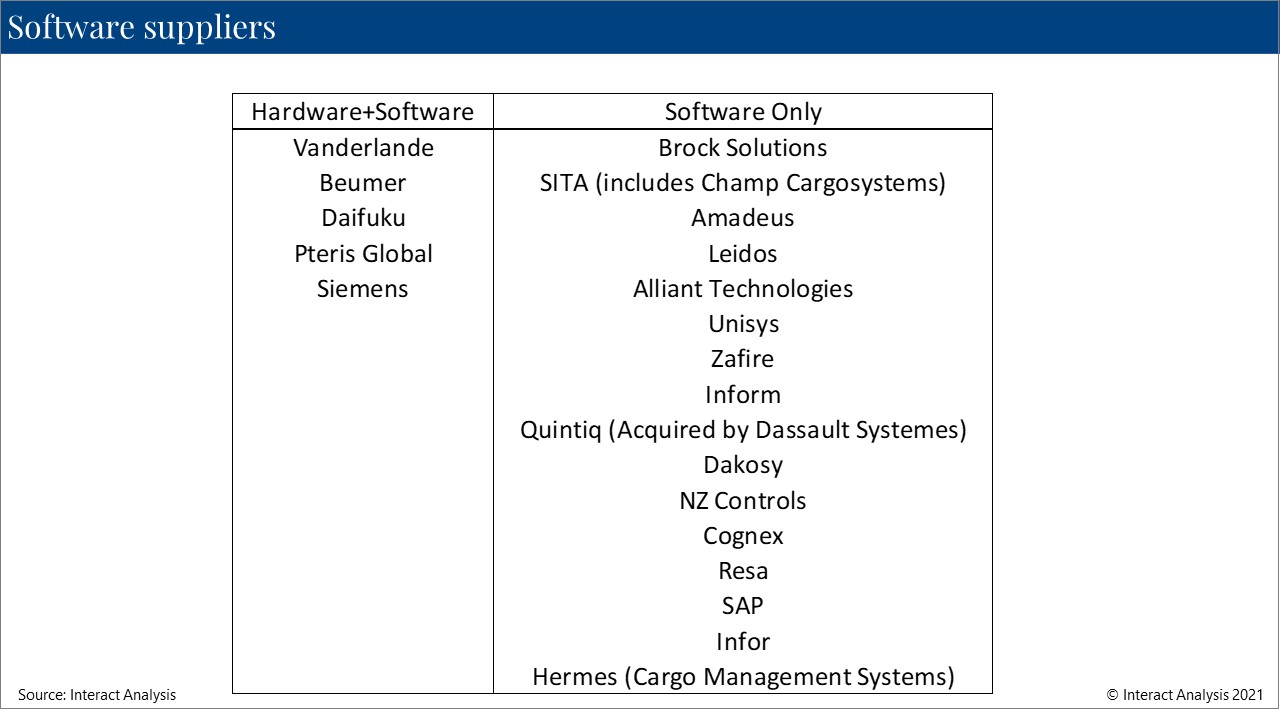 Below the four big players – Vanderlande, Brock, Beumer and Daifuku – are a wide range of software companies – mainly local suppliers such as Alliant Technologies in North America – many of which account for market shares of 1% or less. But despite the prevalence of local suppliers, Western software vendors have a good reputation in China. According to one commentator – a baggage handling systems vendor in China: “Foreign companies are still far more competent in software and control technology. Taking Chengdu Tianfu Airport for example, CALTCO works as the general contractor, and Vanderlande still plays a role to provide software and controlling solutions.”

Pteris Global (who enjoyed a 4% market share in software in 2020) has been successful in winning projects for both software and baggage handling systems hardware in the Asia Pacific region, but the company is not prominent in EMEA or the Americas. Meanwhile, SITA (also on a 4% software market share) has gained some of that share through its collaboration with Cargolux Airlines to form Champ Cargosystems.

Our Western readers may find of particular interest the fact that this report contains an appendix focusing in some detail on the airport logistics automation sector in China, and has information that is otherwise not readily available in English. For further information, please get in touch with Jamie Fox or Shirly Zhu, Principal Analysts at Interact Analysis