How Can You Accurately Forecast the Global Manufacturing Industry?

If you dig around the internet trying to evaluate this question you will likely struggle to find a meaningful answer. There are many anecdotes or clues: typically, regional data points such as industrial production or GDP growth, a purchasing managers’ index here or there, and sometimes even data pertaining to retail sales and exports. But this data is not an actual reflection of manufacturing output, more an obscured view – they don’t answer the question, merely nod in its general direction.

Trying to understand global manufacturing growth can be extremely complex, especially when trying to counter the effects of things like currency fluctuations and derive any kind of meaningful and actionable data. Below you can see data from our latest Manufacturing Industry Outlook (MIO) report, which addresses this topic. The research is based on 34 regional manufacturing surveys. From these annual surveys, we captured data going back to 2007 to enable long-term trends in manufacturing output to be identified in detail at the regional, end-industry and machinery level. The workload to complete the analysis was substantial, as was the difficulty, which might explain why nobody seems to have undertaken a similar project. While not every country of the world is included in our data, the sample size and regional coverage is large enough to be statistically significant.

Exchange Rates Can Confuse the Picture

One very important finding we observed relates to the methodology used when consolidating the data under a single currency. Since each country’s survey data is in local currency, to make region to region comparisons possible, converting to a single currency and aggregating the data is necessary. Consider the following chart. 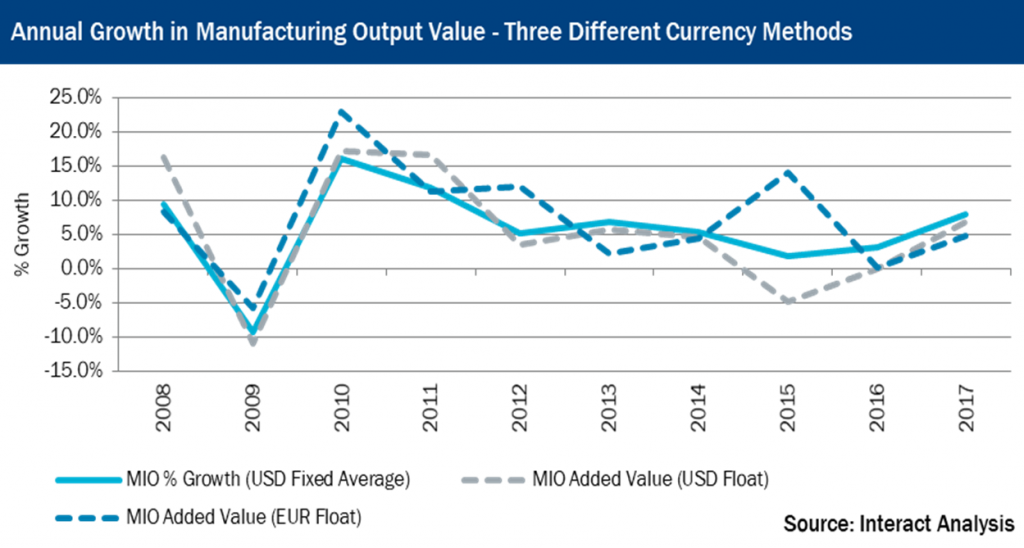 Clearly, in certain years, the growth rates are very different. For example, using a floating US dollar rate, global manufacturing output contracted in 2015, while using a floating Euro rate it grew substantially. These results are caused by the significant devaluation of the Euro versus the US dollar of nearly 20 percent in 2015. In effect, the movement in the currency markets during 2015 was significantly larger than the underlying manufacturing output, distorting growth rates upwards or downwards depending on your currency viewpoint.

Our view is that to understand what is happening in manufacturing output, the effects of currencies need to be removed so that the underlying growth of the manufacturing sector is presented in an unaffected manner. The fixed average method eliminates annual currency movement, whereas the other two series do not. Herein lies the value of the research. It enables a clear view of regional manufacturing performance to be observed, which is an invaluable perspective to support not only our own forecasts for intelligent automation equipment, but also for our clients who are interested in understanding how their businesses performed relative to each region’s manufacturing climate.

Industrial Down Cycle Predicted for 2019

Will the Manufacturing Growth Cycle Continue in China? Part 1

Will the Manufacturing Growth Cycle Continue in China? Part 2

About the Manufacturing Industry Output Tracker


The Manufacturing Industry Output (MIO) Tracker provides a comprehensive analysis of the historical, current and future state of manufacturing among the major producing countries around the world. It features a robust statistical framework for estimating relative output of manufactured goods by industry and region, which, in turn, enables a more accurate forecast model to be derived to predict future demand. It includes analyses across 34 regions, including most major economies of the world, 16 industry verticals (per region), 19 machinery sectors (per region) with 11 years history and five years of forecast (2007-2022). An additional 39 deeper segments (per region) within selected industries and verticals are also included.