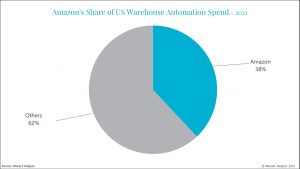 Over the past few years, e-commerce has seen massive growth as a result of the COVID pandemic. According to U.S Census Bureau data, the share of total U.S retail sales coming from e-Commerce rose from 11.9% in Q1 2020 to 16.4% in Q2 of 2020, creating a sudden need for additional fulfillment capacity to cope with demand. Amazon looked to capitalize on this by expanding its warehousing network. According to its annual reports, Amazon’s total warehouse square footage went from 272 million at the end of 2019 to 525 million at the end of 2021. However, it is important to emphasize that not all of this will be used purely for fulfillment. Amazon has made an effort to expand its delivery station network, used to shorten delivery times to customers and improve efficiencies in delivery rather than to hold inventory. Nonetheless this increase in warehousing assets was larger than any other retailer.

However, as the restrictions were lifted, customers were given the choice between continuing to shop online or to shop instore. Once this became an option, many customers started to revert to their former preference and shop in person. Another factor influencing this is the additional cost of delivery with e-commerce services. For many, the effects of inflation and rising living costs have encouraged shoppers to save the delivery fee and use brick and mortar stores. 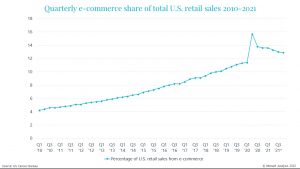 In Q1 2022 Amazon reported its first quarterly loss since 2015. According to sources, the net loss of $3.8 billion resulted in the share price dropping by 12% within a day, after the announcement. There are many factors attributing to the company’s loss, but it is mainly centered around the increased operating costs and excess capacity from doubling its warehouse space in 24 months. Despite the loss, Amazon CFO Brian Olsavsky explained that the expansion was necessary despite the recent drop in e-Commerce demand. He said to reporters, “We did not want space to be constrained. Even with that intent, it took until the second quarter of last year for us to feel like we had enough space. And then we continued to add warehouses for the peak last year in Q4”. He went on to say these expansion plans are made years in advance and cannot be altered as the demand shifts mid-year.

The CFO also believes that Amazon will fill the under-utilized space in Q3 and Q4. However, Amazon also reported over $2 billion of costs related to the excess capacity. According to Olsavsky, these costs are expected to be around for some time. The CFO has also announced they will slow down their expansion plans this year and slow down spending on fulfillment so it can maximize the efficiency of its current space. The company also plans to sub-let up to 30 million square feet of its warehouse space.

Accounting for more than 35% of the demand for warehouse automation in the US in 2021, Amazon’s slowdown will certainly have a big impact on the overall market. Our latest analysis suggests that Amazon’s investments in warehouse automation will decrease by 26% in 2022 relative to its spend in 2021.

How Amazon’s Competitors are Fairing

Whilst Amazon may slow down its investments in warehouse automation, we don’t expect that other retailers will significantly alter their investment plans, especially large brick and mortar retailers in the early stages of their automation journeys. Walmart, for example, is working with Symbotic to automate 25 of its 42 food store-replenishment distribution centers, and all 42 of its regional distribution centers across the US. Recessions often lead to more supermarket sales which will further motivate Walmart to continue on its automation path. Target’s planned $5b capital expenditures on supply chain automation also likely won’t be affected by current economic environment. Another advantage for brick and mortar retailers such as Walmart and Target are their store assets. As the pandemic has waned, many consumers have returned to shop in store. However, Target’s store-based fulfillment strategy means that fluctuations in e-commerce demand will have less impact on the utilization of its fulfillment assets, unlike Amazon. Uncertainty around future e-commerce sales will likely push more brick & mortar retailers to shift their fulfillment operations from dedicated facilities to their physical stores. Instead of investing in automation for dedicated fulfillment centers, Target is focusing on improving the efficiency of how stock is shipped to stores, which subsequently increases the efficiency of its fulfillment operation. As a result, Target will be more inclined to continue investing in automation as that improves the efficiency of its entire operation and not just its online business.

Whilst Amazon invests significantly more in warehouse automation than Target and Walmart combined, it’s likely that increased investments from these companies will somewhat offset the slowdown in Amazon’s future spending.

Potential Upside due to Labor Shortages

Another reason for Amazon’s Q1 loss was increased operating expenses. This came from both increased fuel costs and increased labor costs. Labor shortages have been an issue within the warehousing industry for a while, however, the supply chain crises has further compounded operating costs. Furthermore, Amazon has also faced labor issues relating to the first unionization of a warehouse in Staten Island which may further accelerate operating cost increases in the future.

As Amazon’s operating costs increase with more potential issues down the road as a result of its unionization defeat, Amazon may look to invest more in increasing the efficiency of its existing facilities. While Amazon accounts for more than 35% of warehouse automation spending in the US, it may seem counterintuitive that its facilities remain fairly manual in comparison to some of the highly automated facilities such as those installed by Witron. As a result, there’s a fairly sizable opportunity to increase the level of automation in its existing facilities.

The question is therefore whether Amazon’s potential retrofitting investments will offset its reduced greenfield automation investments. Probably not. However, with Walmart and Target increasing their investments over the coming years, Amazon’s slow-down of its fulfillment center network expansion may not be a terrible thing for the industry. Indeed, many companies have been put off from purchasing warehouse automation equipment due to the extremely long lead times as a result of companies like Amazon keeping the automation vendors very busy.

Likewise, we’re not experiencing a slow-down in e-commerce sales, but rather a correction. The structural drivers are still in play and we expect continued high growth for warehouse automation sales in the long-term.