The first part of this insight, which focuses primarily on the market in Japan, can be read here.

South Korea: Most domestic sales of fuel cell vehicles since 2019

South Korea is also ambitious about the hydrogen economy. The world’s first commercially produced fuel cell car was launched in South Korea. Based on the data we have collected, South Korea is the country with the highest domestic sales of fuel cell passenger cars in 2020 and 2021 – about 8,500 units in 2021 with a year-by-year growth of roughly 47%. Hyundai produces all the fuel cell cars in South Korea.

Despite the impressive results, there is still a remarkable gap between the cumulative deployment volume and the national strategic goal. The Korean government has committed to having 65,000 fuel cell cars by 2022. It seems to be challenging to meet the target, given that the domestic cumulative shipment of fuel cell passenger vehicles was around 20,000 units in 2021. 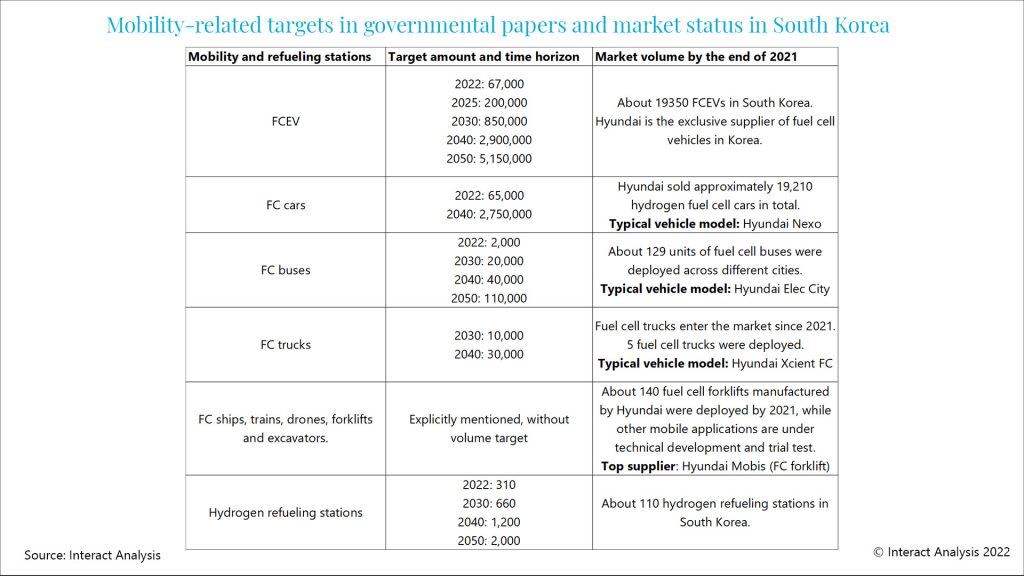 Korean government hopes to have 20,000 buses and 10,000 trucks powered by hydrogen by 2030. However, the market phase in South Korea for hydrogen commercial vehicles is similar to that in Japan. Though annual fuel cell bus shipments in South Korea have increased substantially in 2020 since the introduction of the first fuel cell bus in 2018, the market remains tiny: the total number of hydrogen buses was below 200 units by the end of the first half of 2022. The gap to the ambitious target set by the government is notably bigger than that in Japan. Despite the smaller-than-expected market size, the Korean government contributes to boosting domestic demand for hydrogen vehicles through incentive actions including direct purchase subsidies and pivot city projects to maintain progress toward the deployment target.

The hydrogen fuel cell truck made its debut in South Korea in 2021. The first batch of 5 hydrogen trucks was deployed in Incheon and Ulsan. The deployment is a pilot project by the Korean government and Hyundai Motor, with the Korean Ministry of Environment providing more than 50% subsidy for each truck. There is still a long way to go to reach the goal of 10,000 hydrogen trucks on Korean roads in the following decade. 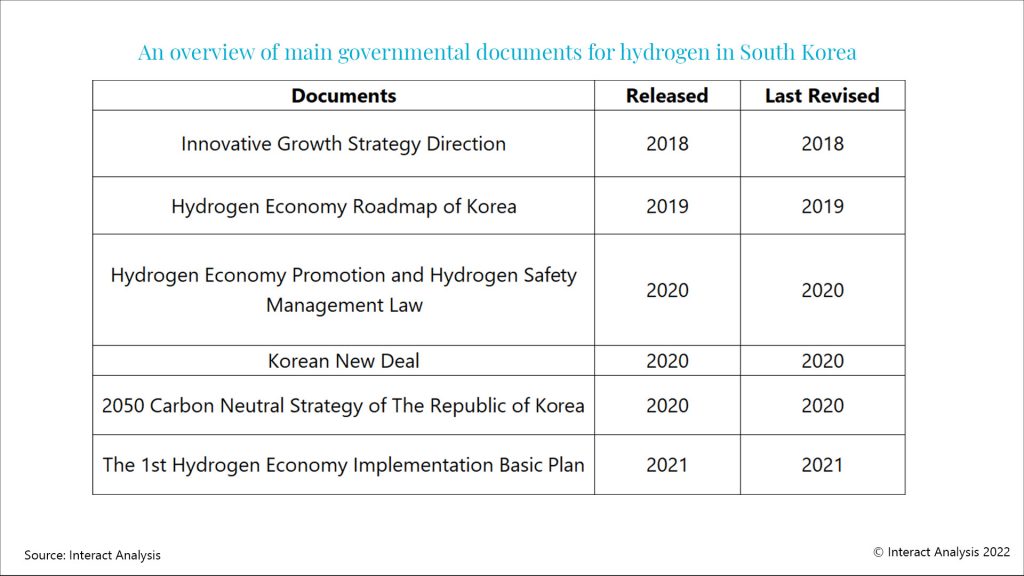 It is worth mentioning that hydrogen heavy-duty trucks produced in South Korea have already had a series launch in Switzerland, and the same model will soon be available in the German and New Zealand markets. Therefore, the hydrogen heavy trucks are ready for a scale deployment in South Korea. However, compared to the number of hydrogen vehicles, the current hydrogen refueling facilities in South Korea are relatively insufficient. The speed of hydrogen station construction will be an important factor in determining whether the hydrogen vehicle market can meet the strategic targets in the future.