The industrial robot market is always a fascinating area to cover, made even more interesting when examined against the challenging conditions faced by industry as a whole. It’s generally accepted that industrial robotics has been a strong growth area for some time now, but more recently it has faced certain headwinds which have challenged that growth.

The slowing global economy, trade wars and uncertainty in the global automotive industry have all contributed to a period of slower than expected growth for industrial robots. Compare this to 2017, when revenues in this sector increased by 20%, and you begin to see why forecasted revenue declines of 4.3% in 2019 could cause concern. 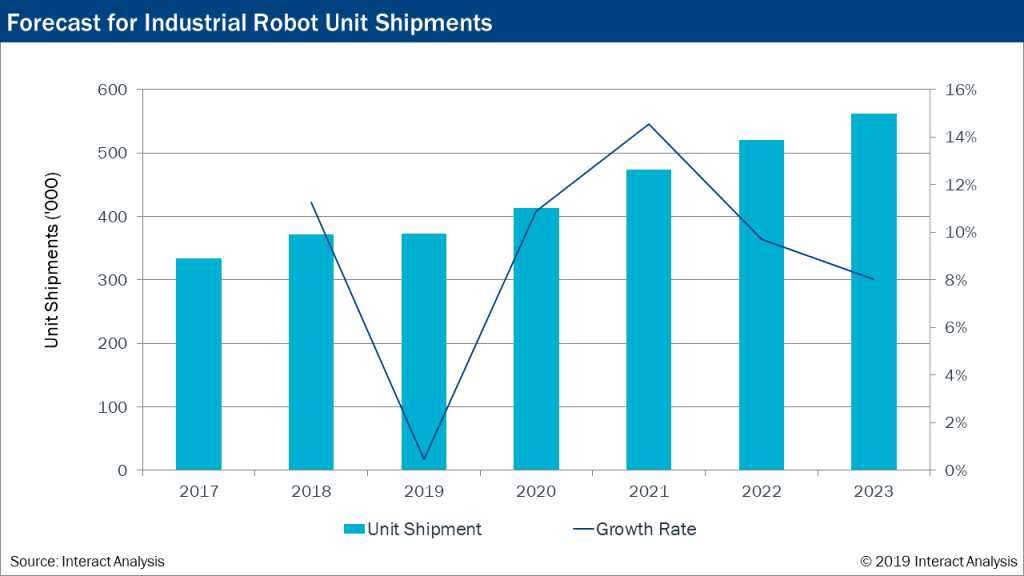 Automotive and smartphone production declines play a significant part in this downturn. 2018 was, as we know, a tough year for automotive. As the largest end-user segment for industrial robots – accounting for over 30% of revenues – any downturn in this area was bound to have a knock-on effect in automation and robot investment.

Despite this, however, there are reasons to be optimistic. Long term drivers, both for industrial robots and for automation as a whole, remain very strong. Growth is expected to pick up in 2020, and then accelerate further in 2021 due to new industry applications, lower prices and wider use cases. We’re seeing demand grow in new areas, like food & beverage, logistics and packaging, all of which accelerates the penetration rate for robots used in these applications. Growth in these industries can’t fully compensate for the decrease in the automotive industry, but it does warrant optimism for the future.

Another contributor to growth comes from the emergence of different types of robots. Articulated robots remain the largest market, and will continue to do so, but the growth rate of collaborative and smaller payload robots is forecast to rise considerably. Our projections for the cobot sector are particularly positive, with over 30% growth expected for both 2019 and 2020, with a CAGR forecast of over 27% between 2018 and 2023.

On one hand, Chinese vendors have entered the market producing mostly low-end, low-cost robots for domestic use. On the other hand, the traditional ‘big four’ in robotics – ABB, Fanuc, KUKA and YASKAWA – have invested heavily in R&D and production facilities in China. This gives them access to opportunities in this huge market, and improves their localisation efforts too. It also has the wider impact of reducing prices across the whole industry.

We’ve also identified changes in the business models surrounding the sale of industrial robots. More specifically, the opportunities for system integrators are huge. While there is a market for direct sales – i.e. from supplier to end-user – there is much higher growth in sales involving system integrators and, to a lesser extent, distributors.

Robot applications are typically complex, involving deep understanding of both the hardware and software elements. End-users don’t just require the robot hardware; they want the benefits the entire application brings. This requires expert resource which simply isn’t common, hence robot suppliers are more inclined to cooperate with qualified system integrators to share the pressure on capital, service and delivery times.

This ties into a wider insight, namely that there is far more to a robotic application than the hardware itself. Robot vendors need to think about software, and how to integrate robots into large factory eco-systems, for example. It won’t be enough to simply provide the hardware. Referring back to the big four mentioned earlier; each of these organisations will view the robot as part of a wider solution they provide, and will aim to provide other elements too including motors, motor drives, sensors and PLCs, for example. Smaller vendors, specifically those focusing on collaborative or small payload robots, will find opportunities but these will likely tend to be standalone applications.

As we’ve outlined, growth of industrial robot revenues has slowed down. The reasons for this are clear and, for the most part, beyond the control of the vendors. Despite this, however, there are clear signs that the industry is diversifying and putting the foundations in place for significant future growth, making this one of the more exciting spaces to operate in.