This week, mobile robot supplier Fetch Robotics announced it had closed its Series B funding round of $25 million, led by Sway Ventures. This was preceded by its peer, Locus Robotics, which just two weeks earlier announced that it had also closed its Series B round for the same amount, but led by Scale Venture Partners.

Investment has continued to flow into robotics companies during 2016 and 2017 as the on-going revolution of automation reaches into almost every industry imaginable. Warehousing and logistics is no different, and perhaps offers some of the best opportunities for robotics companies.

There have been dozens of investments made into warehousing robots in recent years (although few in 2017 until Q4), but below are some of the vendors that have attracted the most:

As mentioned above, Fetch raised $25m in its Series B round, which followed the $23m raised in 2015 in two rounds of series A funding, including $20m from Japan’s Softbank. Fetch was one of the earliest companies to offer mobile robots to warehousing and logistics companies, and counts DHL as one of its customers. Fetch supplies mobile platforms capable of transporting 100 to 1,500kg payloads around facilities using 2D and 3D cameras for navigation.

Locus has raised $41m in the past 18 months, with $16m raised in May 2016 in its Series A, followed by $25m last month. Locus takes a different approach with its solution, with man-to-goods automation and conveying. Its mobile robots work collaboratively with human pickers to maximise efficiency by directing workers to the correct location and carrying up to 45kg of picked products. Like Fetch, it also counts DHL as one of its customers, having recently completed a pilot with it. 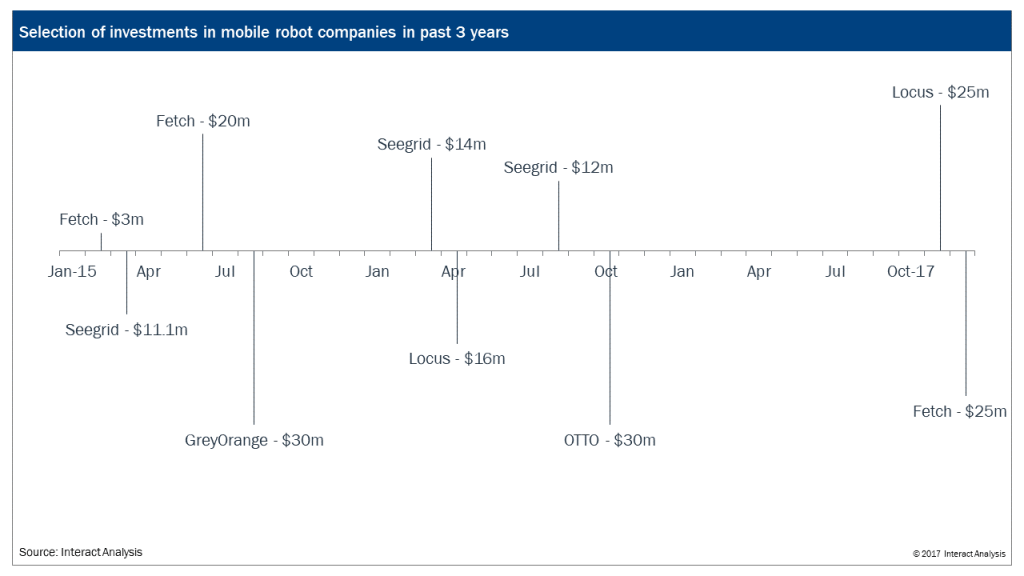 OTTO Motors, which is owned by Clearpath Robotics, has closed $41m in two rounds of funding in 2015 and 2016. OTTO targets both manufacturing and logistics customers with its mobile robot platforms, which can transport up to 1,500kg payloads. Its robots use LiDAR to navigate autonomously and its customers include GE.

Seegrid has raised nearly $100M in funding since it was founded in 2003 – the highest of all mobile robot companies focused on warehousing and logistics. The company supplies heavy-duty fork-lift and towing trucks for autonomous transportation at the pallet level. It was one of the first suppliers of guided vehicles that doesn’t require infrastructure for navigation. Although now generating substantial revenues, it continues to seek investors and raised $26m in 2016 alone.

Automation is creeping into almost every sector imaginable. Whilst manufacturing has relied on robotics and automation for decades, logistics – up until now – has remained reliant on a human workforce. This is all likely to change. A number of drivers have aligned to create the perfect environment for robot adoption in warehouses and make suppliers in this space incredibly attractive investments:

All the above factors are creating an extremely attractive environment for mobile robots which, we believe, will lead to massive market growth and deployment over the next five years. As such, it is not hard to see why companies such as Fetch and Locus are attracting such large investments, despite relatively modest revenues to date.

Many of these robot providers are raising funds at a rapid rate as, until they have cash reserves, they will continue to require investment to provide working capital allowing them to ramp. Rollout at each customer site can also take some time – particularly if the robots are to be integrated into the warehouse management system (WMS). As a result, these robot companies are likely to continue to require cash injections to stay afloat, and more importantly, to have the working capital to build hundreds, and more likely, thousands of robots per year. To give a comparison, Amazon had 45,000 robots in use at its fulfilment centers at the start of this year (which had been added at a rate of around 15,000 per year). Even at a modest cost of $10,000 per robot leads to an annual cost of $150m to build these robots. Of course, none of the companies mentioned above are likely to get to that scale just yet; however, it’s not unrealistic to see their sales grow 3-5x next year, and significant capital will be needed just to build those robots.

There are literally dozens of mobile robot vendors globally, and naturally, they each have their own technology. Some for example have followed in Kiva’s footsteps and created mobile robots that shift mobile racks to allow for more picks per hour, others pick individual products off the shelves, some simply transport boxes, totes or pallets around the distribution center, whilst some lead human pickers to the right location using the most efficient route. Whilst most industries allow for multiple technologies to co-exist in the same ecosystem, it is also inevitable in such a nascent sector that some technologies or approaches will succeed, whilst others will fail.

Finally, as with all high-volume industries, competition will come. High-volume, high-margin industries rarely exist and, naturally, increased competition will come and drive down prices and margins. This is likely to come from two specific fronts: firstly, industrial automation companies that already have decades of experience in automating manufacturing sites and considerable resources to produce robots and develop high quality products. And secondly, Chinese robot vendors which are already starting to emerge today and are being spurred on by their government’s wider ambition to automate industry and be at the forefront of manufacturing efficiency. Given the early stage of this market opportunity, it is perhaps not too much of a concern right now.

The above analysis is taken from a new Interact Analysis report – “Mobile Robots – 2018“, an in-depth report on mobile robots used in material handling applications which will be publishing shortly.