One of the most important factors considered when creating the Interact Analysis APAC machinery and industrial output forecast is the current Japan-South Korea trade dispute. Tensions have been high between these two countries for decades; however, June 2019 saw tensions boil over into a full-on trade war. This has led to boycotts and economic sanctions on both sides with the effect of driving down demand for Japanese goods in South Korea and vice-versa.

According to an official in the South Korean Ministry for Trade, Industry, and Energy, a move by the South Korean government to drop Japan from a list of countries which have fast-tracked trade with South Korea would adversely affect around 100 local firms in 3 key areas: telecommunications equipment, semiconductor materials and chemical products. Further, Japan and South Korea export similar products to each other. This is likely to be caused by similar industrial structures and an historic leaning towards Intra-Industry Trade.

It has also been reported that Japan is delaying the export of three key materials used in the manufacturing of computer processors: photoresists, hydrogen fluoride and fluorinated polyamide. Hydrogen Fluoride (HF) is also used in many other industrial production processes such as the production of pharmaceuticals such as fluoxetine (commonly known as Prozac) and materials such as PTFE (commonly referred to as Teflon). It is also used to etch silicon wafers and the lack of supply of it could cause serious problems for the Korean semiconductor industry. For this reason, companies who rely on the supply of high purity hydrogen fluoride are looking to source their supply from elsewhere.

Regional business news outlet NNA reported in early September that industry giant Samsung Electronics Co. has begun sourcing their HF supply from China instead of Japan due to the export controls levied by Japan on HF exports. The HF supplied is of a lower purity, but Samsung is getting around this by experimenting with enhancing the purity of the HF that is manufactured in South Korea by the firm Soulbrain Co.

The upside of this is that Samsung can continue making almost all its products, the downside is two-fold. Firstly, lower quality Hydrogen Fluoride usage leads to an increase in the rate of flawed or unusable products. Secondly, only Hydrogen Fluoride of 99.999% purity is used in processes such as ‘dry edging’. Luckily for most semiconductor manufacturers, only a few processes require high purity HF and so the second issue is not necessarily felt as hard as it could be.

These are very specific problems for very specific industries, and it is worth looking at how key sectors are performing to ascertain whether these difficulties are having a meaningful impact on the South Korean and Japanese economies as a whole. Even if it isn’t having a material impact, the very fact that Samsung is adjusting its supply chain has implications for Japanese suppliers in the future.

Based on monthly production indices provided by the Korean Statistical Information Service (KOSIS), chemical production in South Korea has slowed or declined in the time since the trade war began, especially in the production of fertilizer and nitrogen compounds. However, based on further research it appears that the issues facing the fertilizer industry are not related to the trade war at all.

According to a press release from the Korean Fertilizer Association in mid-October, an increase in the cost of importing raw materials combined with a lowering of the supply price by the National Agricultural Cooperative Federation (NACF), has significantly impacted the domestic Korean inorganic fertilizer industry. Firms are sustaining significant losses (not helped by poor export competitiveness) to the point where the industry is in danger of collapse. This could have a knock-on effect on agricultural and food & beverage industries which rely on a regular, easy to access supply of fertilizer. Firms may be forced to switch to more expensive foreign exports impacting their profitability.

The semiconductor industry does not appear to have been put under any strain and in fact appeared to steadily grow across the period. A way to account for this could be that semiconductor production in South Korea is widely exported and that the volume of trade with Japan is less consequential compared to that with the rest of the world and so it has the ability to lose one trading partner without such a high cost as well as the previously stated supply switching by major semiconductor manufacturers. South Korea accounted for 12.3% of the MIO category “Semiconductor & Electronic Components” in 2018. The second largest region behind China. 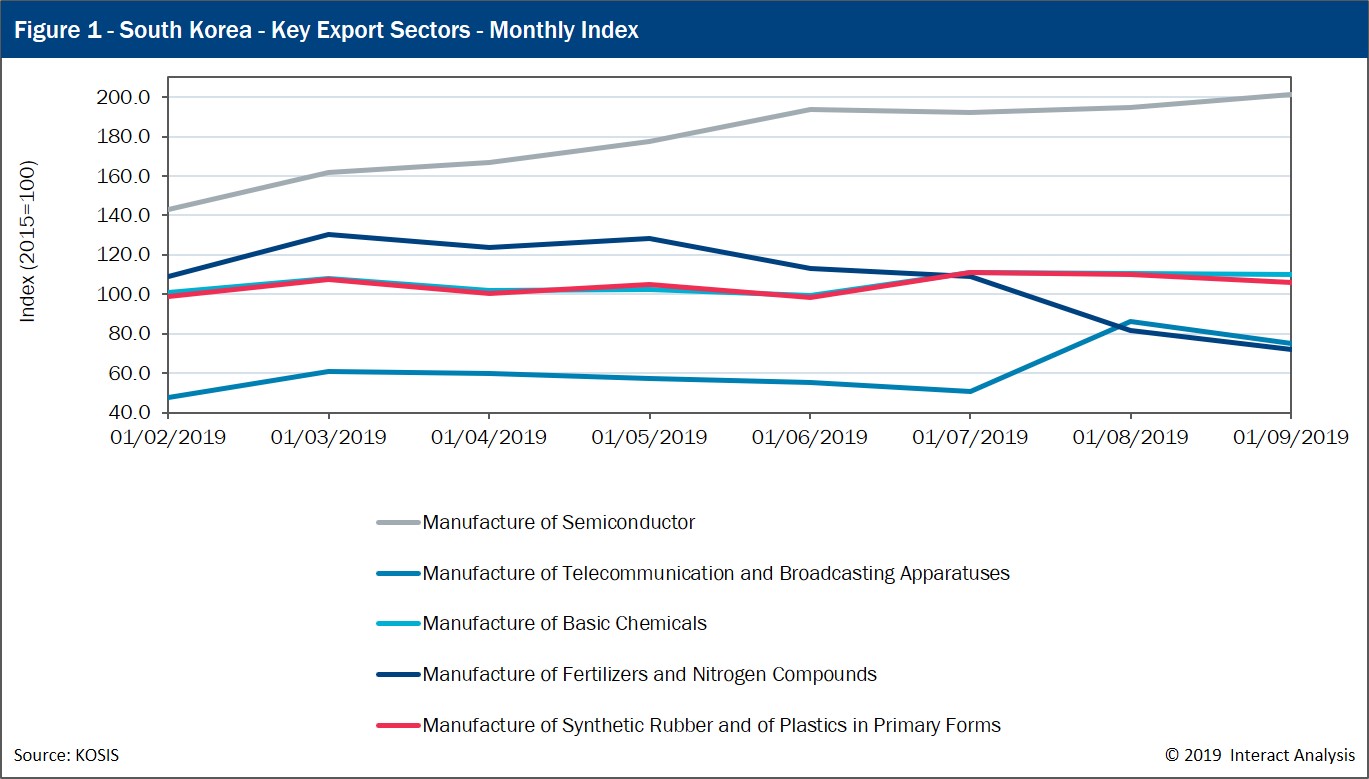 In Japan, the similar trade sectors have been performing in much the same way in monthly indices provided by the Ministry of Economy, Trade and Industry (METI). Total chemical production increased across the period; however, certain sectors such as Chemical Fertilizers were down significantly compared to before the trade war. This, however, is likely influenced by oil price fluctuations rather than the trade war itself. 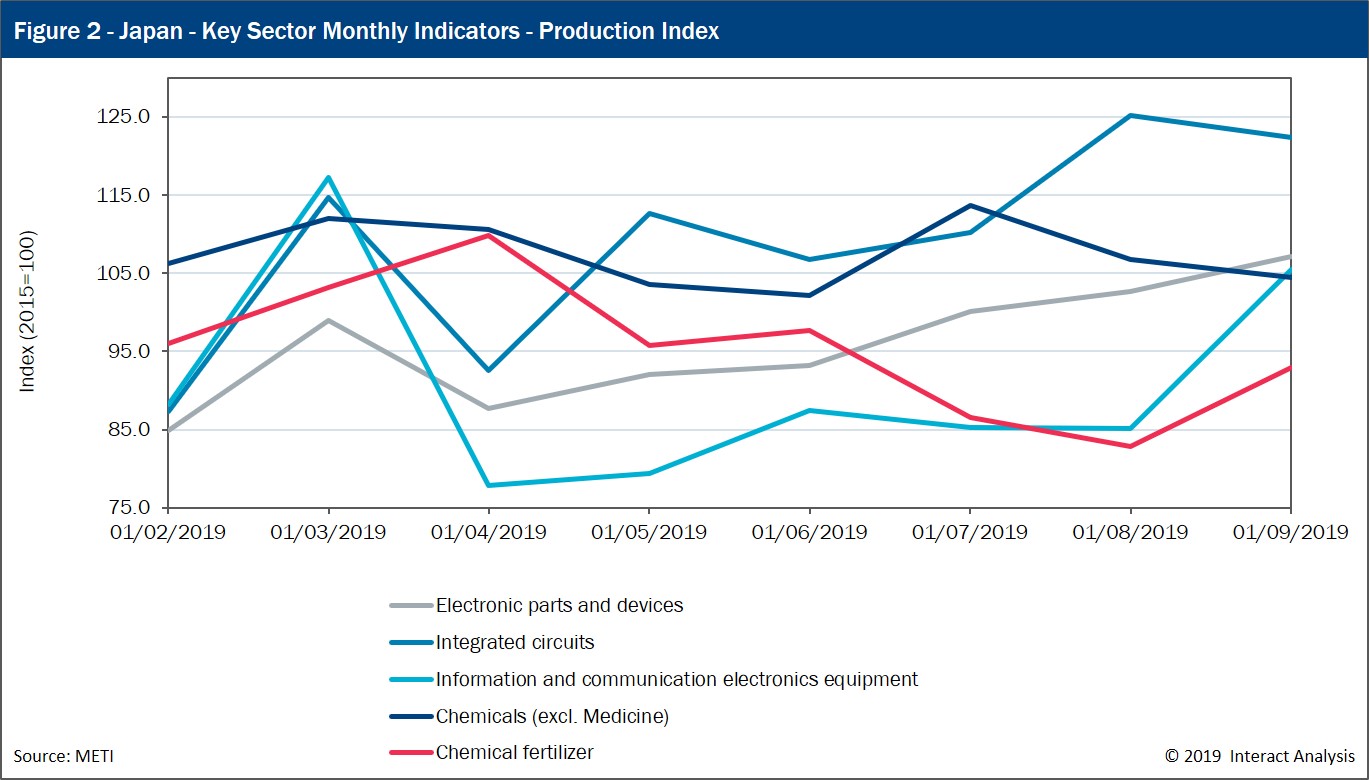 Japan is still granting export licenses but if the situation was to deteriorate to the point where this were to stop happening it could severely curtail production in South Korea by forcing Korean businesses to pay a much higher premium on crucial materials. This move may have a positive effect for some Japanese manufacturers but is going to cause massive problems for others who rely on components from South Korea.

While it appears that some major end user industries are doing just fine, the same cannot be said for the machinery sector. KOSIS data is limited in that it only provides a very low level of granularity; however, it does show that the machinery market in South Korea has been performing exceedingly poorly since the middle of the year. General purpose machinery production fell 13.2 index points from July to August. (note: The index for July and August are preliminary and subject to change). 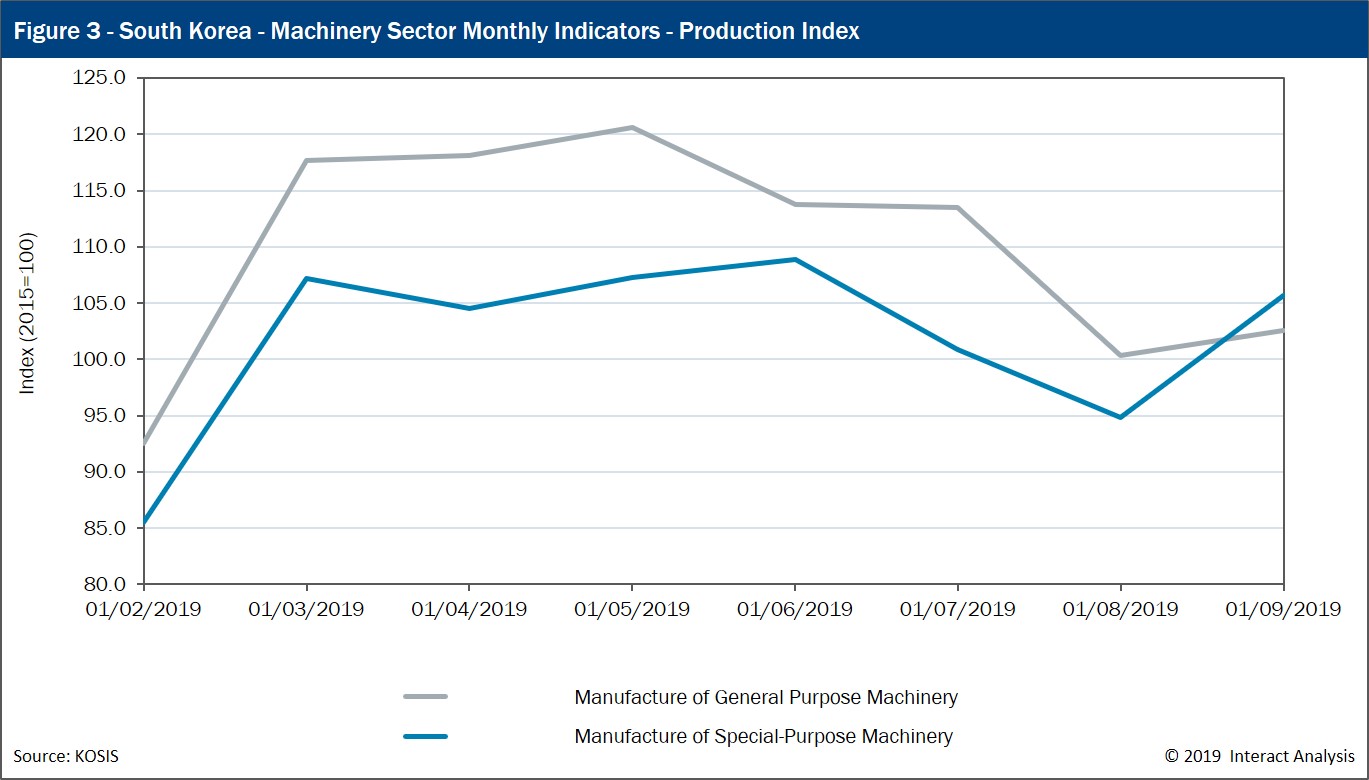 In Japan, we have a similar story though the effect is less pronounced. Most of the machinery indexes were trending down from June, however they were starting to show signs of recovery into September. Semiconductor and Flat Panel Display production dropped over 50 index points from March to August. In a previous insight, we discussed the effects of the global market situation on the machine tools market. We found evidence from the JMTBA (Japanese machine tool builders association) that the order books for Japanese Machine tools were significantly down compared to the previous year and now based on these other monthly production indices we have ample evidence that this problem isn’t isolated to just machine tools but is symptomatic of a machinery market fallen on hard times. 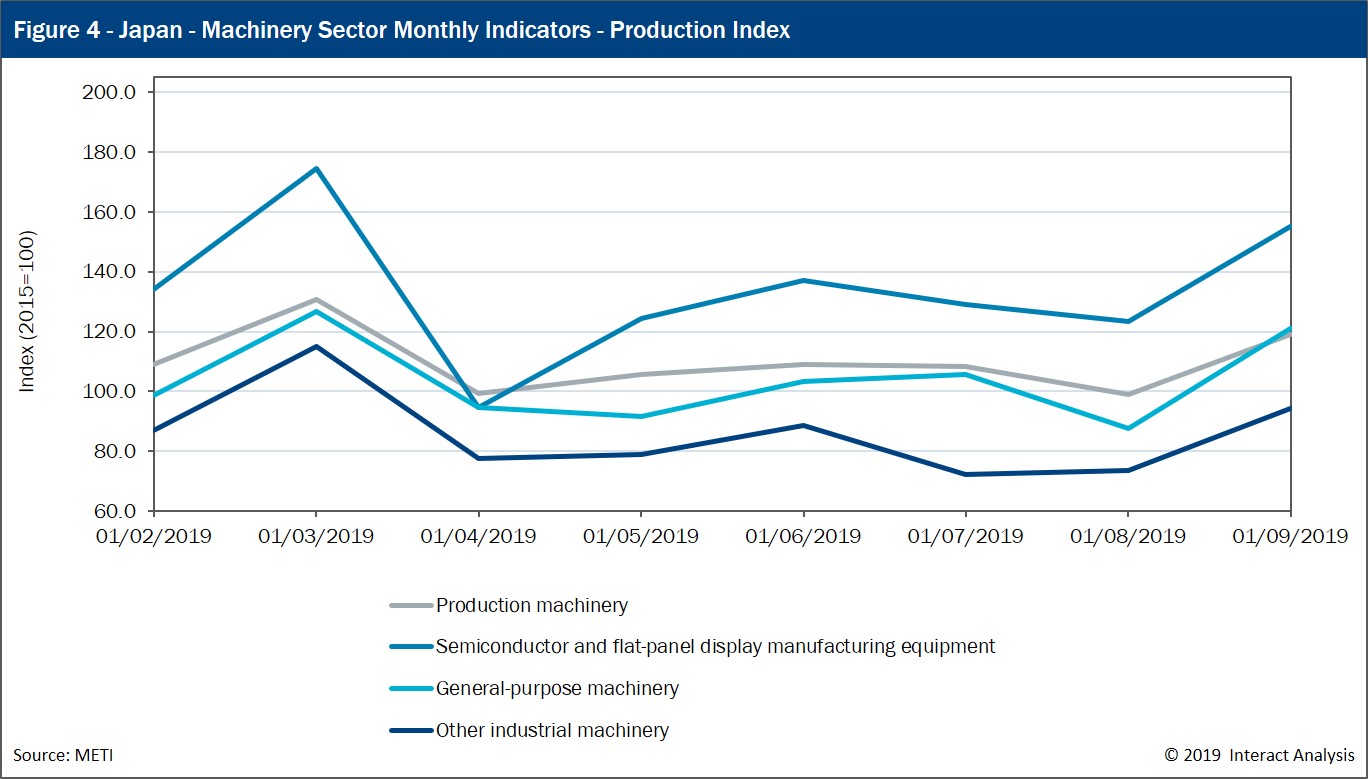 What is the MIO Forecast?

Based on the performance of these key industries among others, are short-term forecast for 2019 in South Korea as a whole is negative growth of -1.2%. Comparatively, our expected growth in Japan for this year is -0.7%. For our machinery sectors we expect an even harsher drop of -14.3% and -6.1% respectively. These figures are based on a mixture of monthly indices, industry reports and our own economic modelling.

The next figure shows our mid to long-term forecast. We currently expect 2020 to be a pickup year as large-scale economic difficulties start to resolve themselves; however, we do expect a natural downturn sometime between 2022 & 2023. 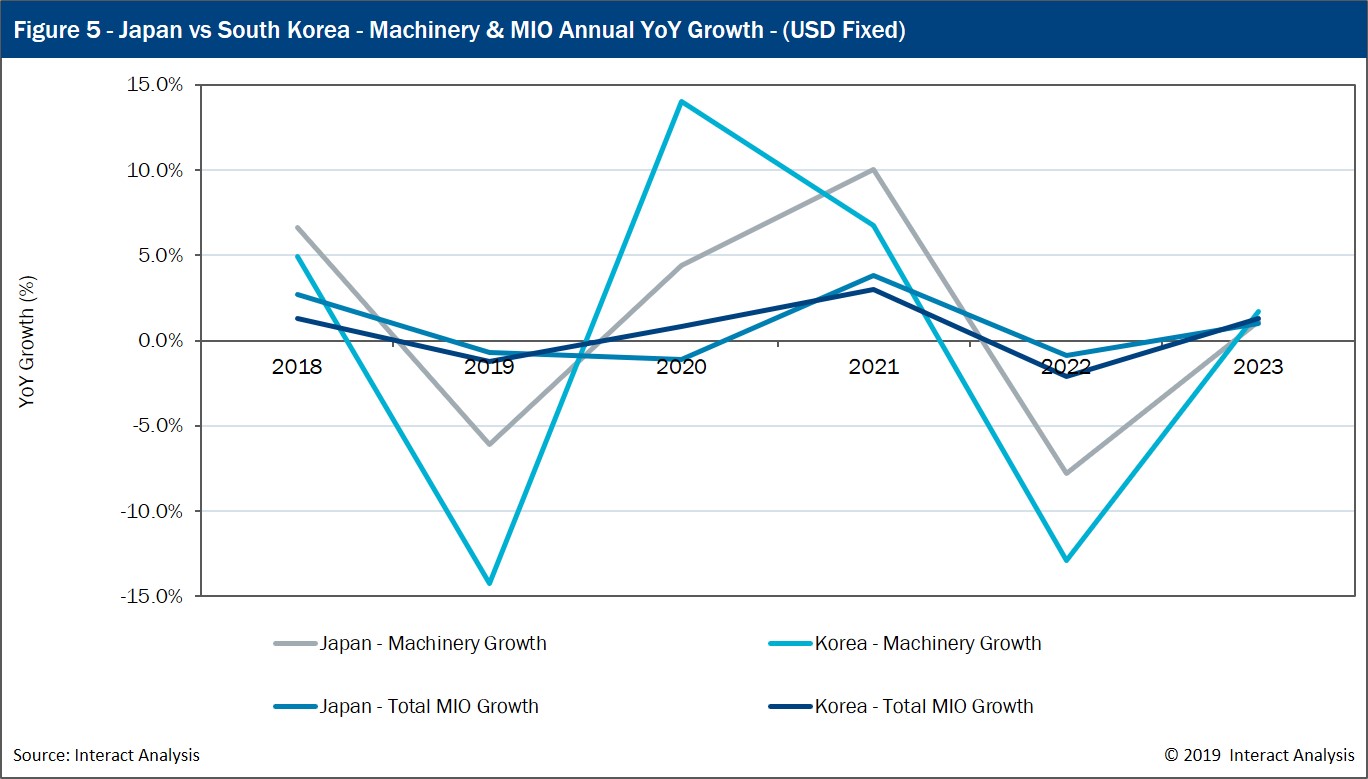 Obviously, there are other factors influencing the performance of the South Korean and Japanese manufacturing sectors. Between the global market slowdown caused by the US-Sino trade war and the uncertainty in Europe around the ongoing Brexit saga it is difficult to judge how large an effect this trade dispute is having. The effect of the Japan – South Korea trade dispute appears for now to be localized to certain industries and is not as much of a driver on these lower granularity indices. However, if the relationship progresses to the point at which manufacturing is significantly affected this will be reflected more strongly in our forecast.

If you’d like to learn more about the Manufacturing Industry Output (MIO) Tracker then you can download a free sample report and brochure here.