Last week’s ProMat and Automate shows in Chicago saw more than 60,000 attendees and 1,500 exhibitors descend on Chicago for the co-located events covering supply chain solutions and automation technology. This year’s shows saw even higher attendance than previous record years amidst strong market conditions. ProMat again had a massive focus on robotics and automation with exhibitors in these fields dominating the floor space.

By and large, ProMAT saw the largest material handling vendors showcase incremental improvements to their existing product ranges, rather than new innovations. It was the lesser known and emerging companies which demonstrated the new and unseen products; most notably Boston Dynamics which is looking to commercialise its in-house expertise in robotics and Berkshire Grey which revealed itself this January having been in stealth mode since 2013.

Boston Dynamics showcased a robotic case picking solution which uses several suction grippers to pick large items. A few weeks prior to the show, it also announced that it will be developing a case picking mobile robot based on its Handle robotic design. This unusual looking robot, which resembles a large flightless bird, may in future work alongside human workers in distribution centres and warehouses.

Boston Dynamics’ in-house robotics expertise and financial backing of owner, SoftBank, could prove to be invaluable in its early years. Establishing partnerships with retailers and system integrators will be the next step in its path towards commercialisation.

Berkshire Grey, founded by former CTO of iRobot, Tom Wagner, showcased two solutions. One solution, aimed at omni-channel retail, uses mobile robots to sort and buffer totes and/or cases and facilitates the fulfilment of orders or goods to be shipped to store. The mobile robots use QR codes to navigate but also physical guide plates to allow the robots to move more rapidly. The piece-picking robot then picks the goods from the tote or case and places them into an out-bound customer box (see Figure 1 below). The vision system learns from past picks to improve pick rates and reliability going forward. The other solution – again aimed at omni-channel retail – is a ’dynamic sorting solution’, again utilizing the piece picking robot and shuttle system for outbound parcel sortation.

Picking has always been the most difficult point in the supply chain to automate. Berkshire Grey’s solution is still in limited production but if it can become commercially viable, it could prove to be a disruptive technology. 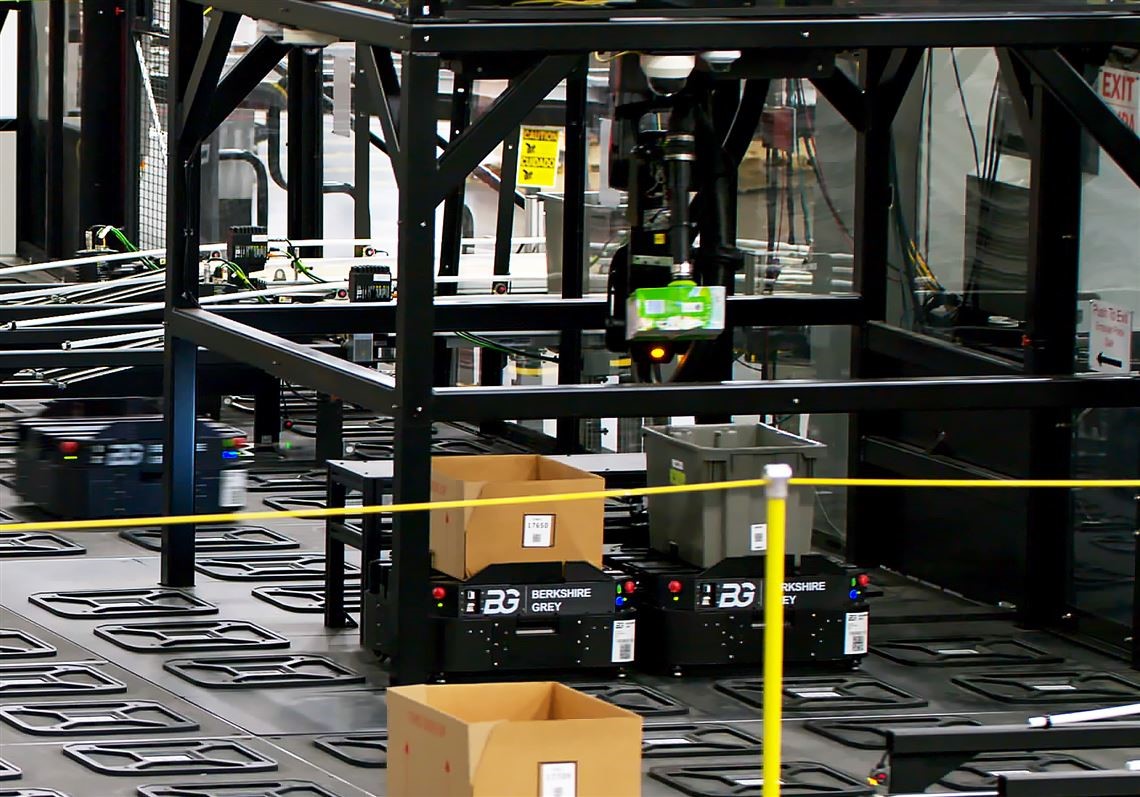 Until now, having very large, centralized distribution centers has proven to be a very popular way of lowering overall distribution costs and consolidating fulfilment. The problem of automating last mile delivery is still to be solved and one approach that is getting higher on the agenda is the use of micro-fulfilment – both to get distribution centers closer to the final consumer, and also to take advantage of any brick and mortar stores that retailers might have. Growing customer expectation for next-day delivery, and with the transportation of goods across large areas within 24 hours has led many retailers to re-think their logistics operations.

Knapp announced last week that it had signed a $150 million deal with grocery automation start-up Takeoff Technologies to install 50 micro-fulfilment sites across North America, inferring an average automation project size of just $3m. Unlike very large centralized fulfilment centres which can take up to two years to integrate, Takeoff Technologies claim its automated facilities can be installed in three months and this time span is likely to shorten.

The trend of micro-fulfilment is now taking a real hold on the logistics industry and this could have a significant impact and also opportunities for warehouse automation vendors.

Collaborative robots were in abundance in the Automate section of the halls. We visited close to 20 companies that are manufacturing and selling cobots at the show. Almost every major industrial robot vendor had a cobot on show, whilst we saw the US launch of many newcomers including an impressively large booth from Doosan. The Korean cobot market leader, Doosan had dozens of cobots on show at its booth. It launched 4 models at the show for the North American market.

Perhaps more impressive was the Universal Robots booth which occupied a large part of Automate. The world’s largest cobot vendor focused on demonstrating the wide range of applications that its cobots could be used for and the variety of its UR+ ecosystem. The UR cobot was not just on show at its own booth but seemingly everywhere at the show with the company claiming that more than 30 other exhibitors were demonstrating over 80 collaborative robot applications using UR’s cobot arms. The company reported an expected 25%+ increase in revenues in 2019, highlighting the high demand for collaborative robots. 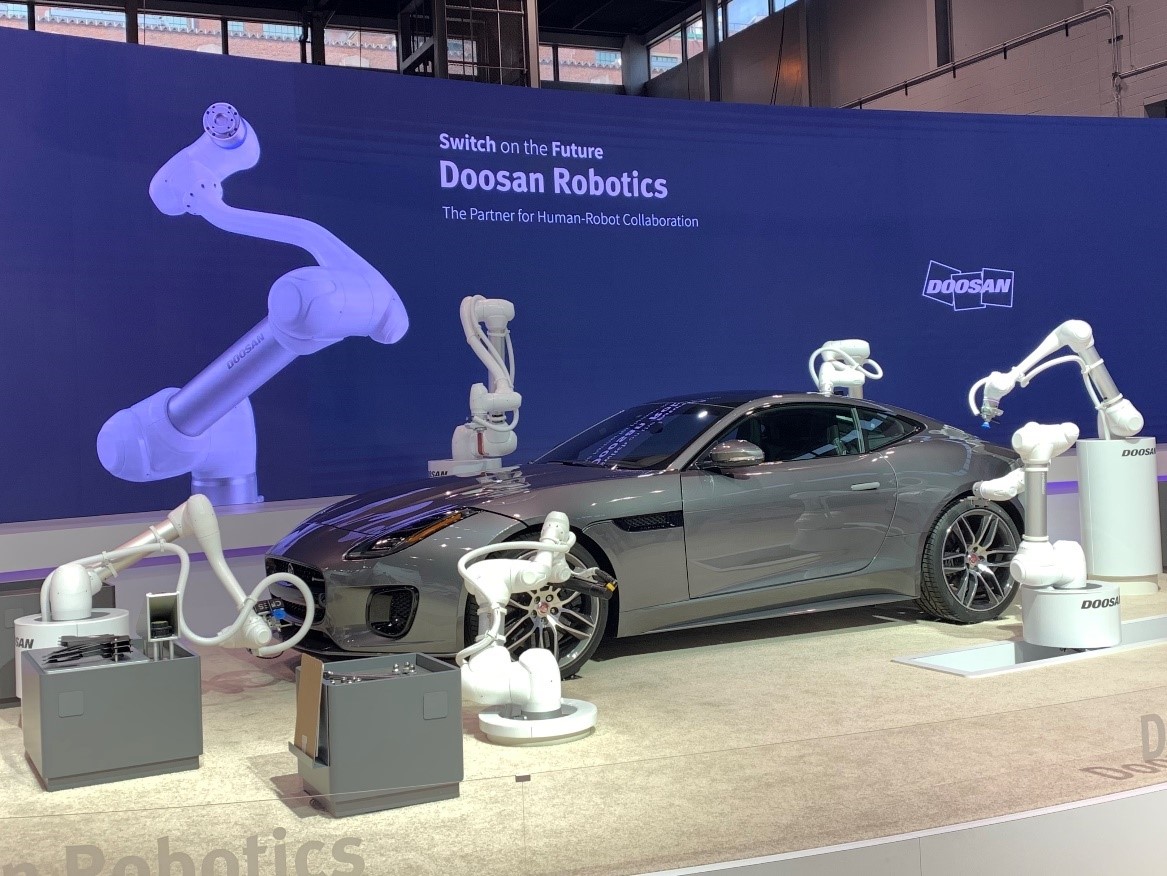 All of the ‘big 4’ industrial robot manufacturers – ABB, Kuka, Fanuc, Yaskawa – were showcasing collaborative robots and the topic featured high on the conference agenda too.

Market penetration of robotic piece picking solutions is currently low. A handful of warehouses are piloting the technology and we expect globally it’s still in the tens rather than hundreds. The main limitations of robotic piece picking are the slow speed relative to human pickers, the inability for the vision system and gripper to deal with awkward or unusual items and the reliability. This is changing quickly, however. Companies like Righthand Robotics were demonstrating how its integrated solution, using AI-enabled vision and motion control software with deep learning, is vastly improving the performance of robotic piece picking. The company claims its customers have performed ’10 million picks’ using its technology.

Whilst uptake of the technology is low right now, we see it as almost inevitable that this will become mainstream in the next decade given the underlying drivers (labor shortages, cost competitiveness, need for speed and flexibility, etc).

Most of the ‘start-up’ AMR companies had much bigger booths this year (compared to MODEX in 2018). That perhaps illustrated the advancement in where these companies now are. Almost everyone we spoke with reported double- or triple-digit growth in 2018 and a similar outlook for 2019 – though many of these companies are starting from a very small base. Nonetheless, the size of the companies’ booths highlighted the growth and success that’s now coming to fruition. Companies such as Locus Robotics and 6 River Systems had much larger booths that appeared very busy with visitors. Many people commented that the robotics and automation companies were ‘taking over’ the ProMat show and now dominating the floor space. Some of the vendors from Asia, like GreyOrange and Geek+ were exhibiting at the show for the first time.

As you can see from the below slide (Figure 3) that we presented at the conference last week, our initial estimates for market growth last year are considerable and we believe will accelerate. It’s easy to see why the market is attracting so many newcomers. 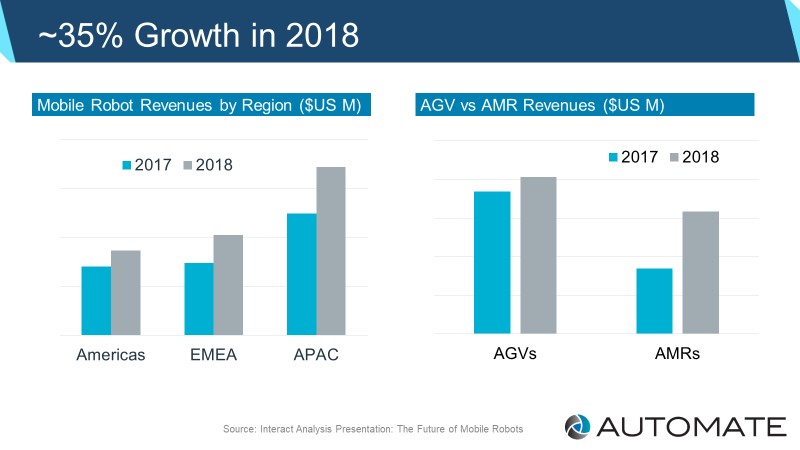 We also wrote a longer insight on the presence of mobile robots at ProMat and Automate and the high demand the vendors are enjoying in 2019.

The bi-annual event has grown considerably in recent years and as a sign of the industries’ success, the two shows will sadly part company from 2021. Automate will instead be held in March in Detroit, whilst ProMat will remain in Chicago in April 2021. ProMat has already announced that it will continue to expand coverage of robotics and automation technology with the introduction of a Robotics and Solution Center in 2021.

On the final day of the conference, the MHI previewed its 2019 Annual Industry Report which, perhaps unsurprisingly, found that supply chain businesses are intending to continue to increase spending on robotics & automation, AI, driverless vehicles & drones, predictive analytics and sensors. These technologies have the capability to revolutionize the material handling and supply chain industry and we intend to track them carefully in the coming months and years!

Collaborative Robots – 2018 – the novelty of the collaborative robot market plays a part in the absence of accurate market data available. This report provides current and accurate market information, incorporating revenue and unit data on a regional and industry level.

The Future of Warehouse Automation – 2019 – report will be based on 40+ hours of primary interviews with key industry stakeholders to forecast the market out to 2023 split by product type, function, region, end-user industry and project size. In addition, the report will also provide market share analysis, company profiles and detailed discussions on the trends affecting the market including e-commerce, the future labour market and emerging technologies. For more information please contact Rueben.Scriven@interactanalysis.com 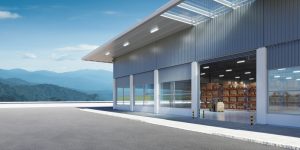 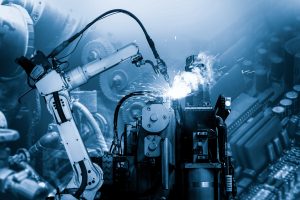