The global Li-ion battery market is moving into surge mode. Just look at the figures for 2020 – 2021. According to our newly released Li-ion battery database, global shipments in 2021 equated to 476.3 GWh, amounting to a 72.6% increase on 2020, and that wasn’t a blip. We’ve identified it as being part of a longer-term trend. Let’s have a look at some more figures and identify the drivers to the Li-ion battery revolution.

Demand from EV outstrips all others, but energy storage is the growth story

Impact of Ukraine conflict will be limited

Russia and Ukraine have vast untapped lithium reserves, and Russia is currently a big exporter of nickel, palladium, aluminium, platinum, steel, and copper. The situation in Ukraine and the resultant sanctions on Russia will therefore will inevitably lead to shortages in the supply of some industrial raw materials. The Li-ion battery market will be impacted to some extent, but we do not think the effects will be massive. In terms of lithium, the key point is that most reserves in Russia and Ukraine are as yet untapped. The war has delayed plans to extract it, but it has not taken much existing production offline.

We estimate that global demand for li-ion batteries will rise to over 1.6TWh by 2026, representing a 5-year CAGR of 27.9%. The share of shipments to EV manufacturers will remain stable, standing at 75.9% of the total, but there’ll be growth in demand from the ESS sector, with shipments forecast to total 312.4 GWh, accounting for 19.2% of all battery shipments: a 5-year CAGR of 40.9%. CE battery shipments are expected to total 81.3 GWh over the 5-year period, with a CAGR of 4.4%. 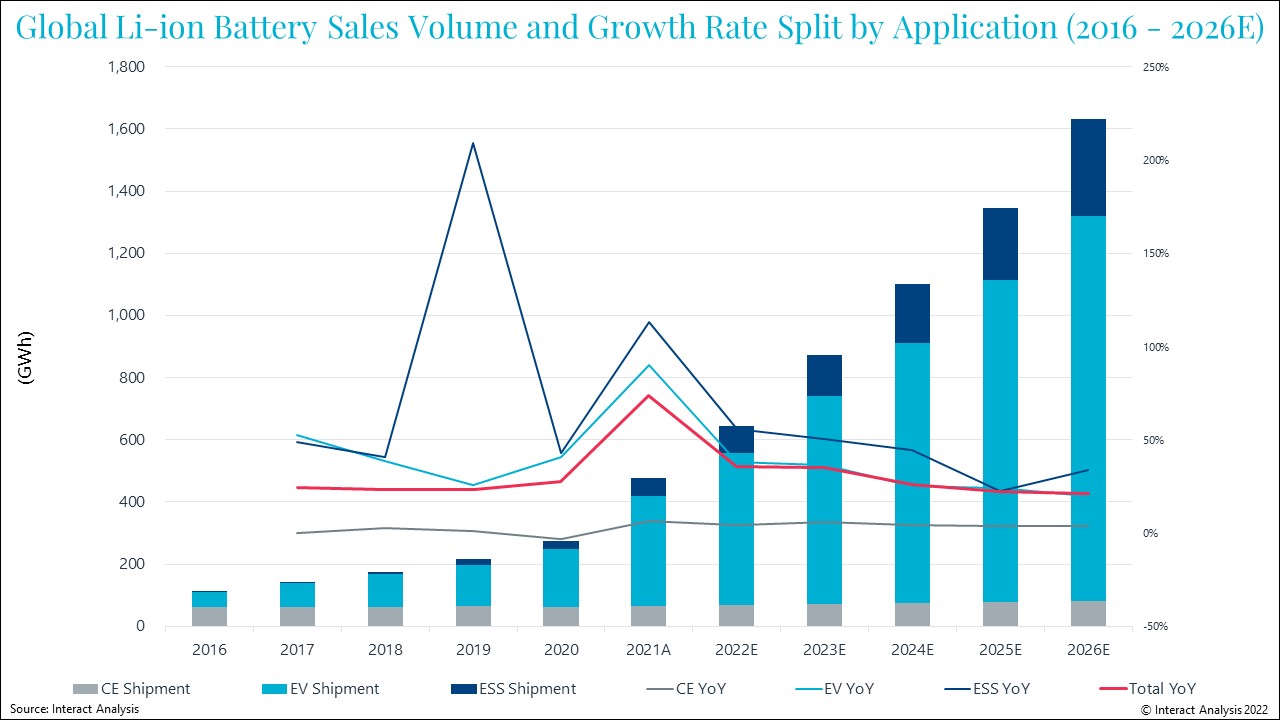 APAC to dominate the demand market

In terms of regional demand, APAC will dominate throughout the forecast period. The region gobbled up 75.1% of all battery shipments in 2021, and will almost maintain its share going up to 2026, when it will hit 74.3%. But we expect the Li-ion battery market in the Americas to enjoy the highest growth rate over the next 5 years, when it will see a CAGR of 29.5%. EMEA will follow, with a 27.9% CAGR, and only then APAC at 27.6%. Despite the relatively higher Americas and EMEA demand growth rates, though, the increase in production capacity is a gradual process. Even 2-3 years from now, neither region will be able to meet all its local demand. 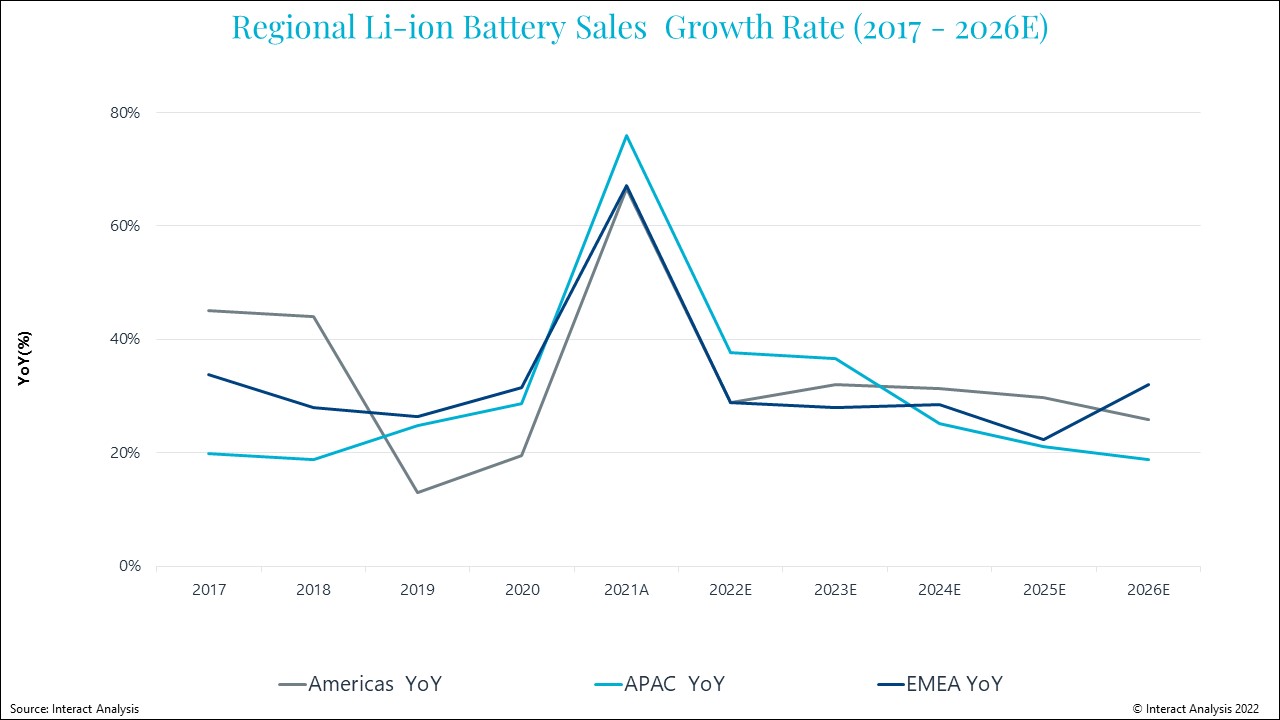 Battery OEMs – no end in sight to production constraints

The market share of different Li-ion battery technologies is changing. Back in 2018, lithium cobalt (LCO) and lithium iron phosphate (LFP) batteries accounted for over 50% of the global market. But LCO’s share has steadily declined over the past three years, in line with the decline in growth of the consumer electronics sector. Conversely, the demand for high quality nickel-cobalt-aluminium oxide (NCA)/ nickel-cobalt-manganese (NCM) batteries from the electric vehicle and industrial energy storage sectors has exceeded supply, which is why many battery makers announced plans to expand production capacity between 2018 and 2020. We forecast that the market shares of LFP batteries and NCM/NCA batteries will be evenly divided by 2026. 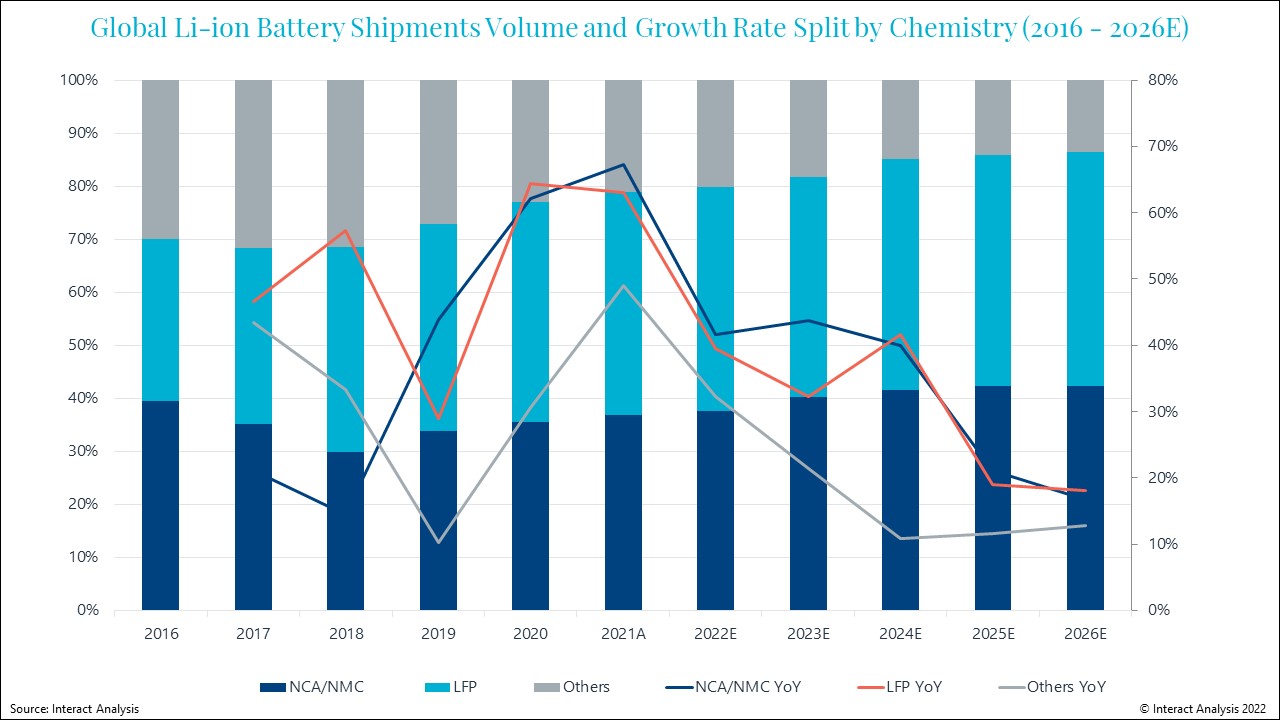 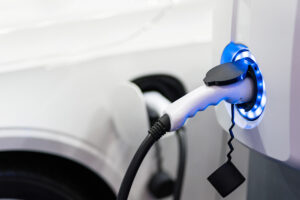 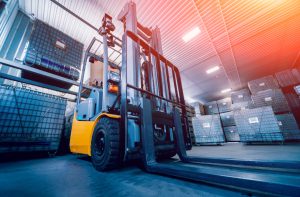