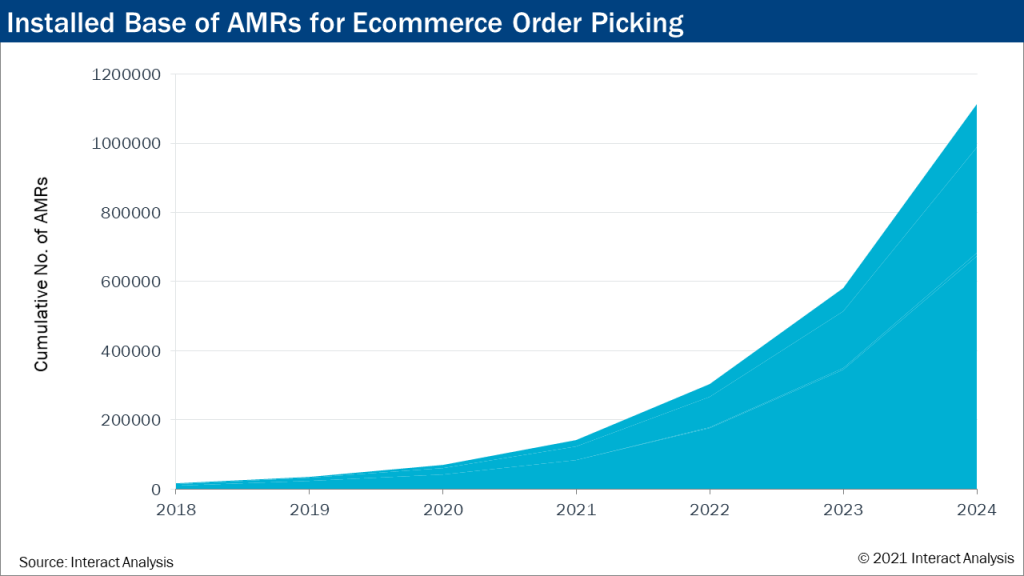 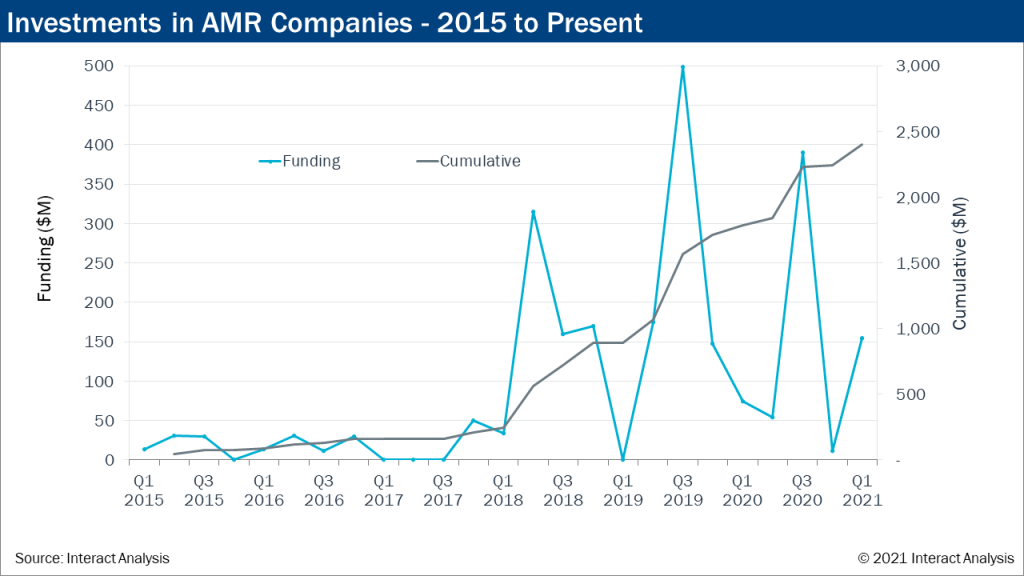 We wrote about this issue back in October 2020. Check out our insight below to learn how we see the market for mobile robot start-ups will develop in the coming years.

The market for AGV’s and AMRs – or mobile robots as we collectively call them – grew by a staggering 27% last year and we predict it will continue growing at a double-digit pace over the next five years. Given that outlook, it is not surprising that more than 100 vendors now compete in this sector, and that more emerge every week.

As we have been tracking this industry for close to four years, we have seen many VC-backed start-ups mature and expand; with many now enjoying healthy revenues. In fact, combined revenues from mobile robot start-ups reached nearly $500 million in 2019, a five-fold increase since 2017 that equates to a market share of 25%. The revenues of many of these successful startups have now reached the tens of millions of dollars range and yet, at the same time, the number of vendors generating less than $5m in revenue has remained stable over the past three years. This is due to the continual emergence of new vendors in the sector. We have identified 120 vendors that are commercially shipping product, and more than half of these have generated less than $5m in annual revenues to date.

Major industry consolidation appears unlikely in the next 2-3 years. However, given the current economic environment and interest in mobile automation, it is likely some of the smaller players will try to ‘cash in their chips’. At the same time, we are also likely to see even more vendors emerge over the coming years. 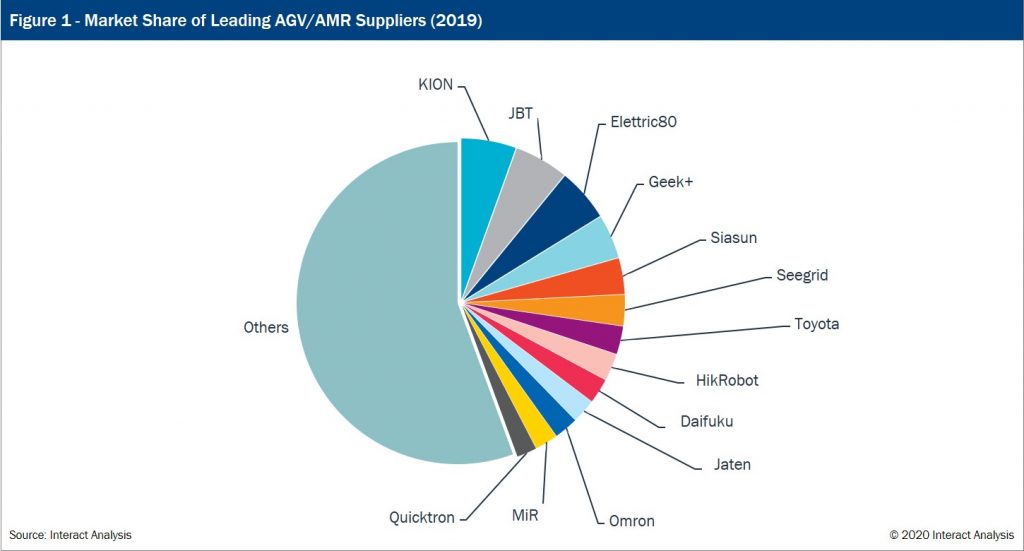 Many Competitors but Little Competing

Given that much (although not all) of the growth in the mobile robot industry is driven by SLAM-based AMRs it is not surprising that the more established AGV vendors are looking at how to offer their own AMR technology, either through acquisition, or by investment, or by developing it in-house. In spite of this, there are some key areas where AMRs compete with AGVs. The most notable of these is in the transportation of large loads like pallets. Large loads can generally be moved either by a laser guided AGV or a SLAM-based AMR using natural navigation (or, of course, they can be moved manually). More recently, lower cost platforms that are able to tunnel underneath conveyors, from vendors such as MiR, OTTO and Fetch, have emerged as a third option.

Aside from that, competition is not as fierce as one would expect in an industry worth just $2 billion and yet having well over 100 vendors vying for a slice of it. The reasons behind this are twofold: first, each of the AMR vendors has a particular niche or sweet spot. This could be their business model (e.g. offering a RaaS approach which tends to attract customers wanting a low-capital, low-risk option), or it could be that their approach is relatively unique and, despite fitting within the overall ecosystem of material handling, sits within a specific niche where few other competitors offer a similar approach to solving the same problem. Second, there are dozens of material handling processes in warehouses and factories that can be automated. Yet each of these processes is somewhat unique to that customer and often requires a unique solution. As such we see all of the various AMR vendors coexisting with somewhat limited competition – for now.

Given the net positive impacts of the role of COVID-19 in driving e-Commerce and automation, it is not surprising that investor interest in mobile robots has grown. In fact there have been a flurry of investments in recent months; with three major investments totalling nearly $150m made in the three months since we previously wrote about this. Most notable was the $90m investment raised by France-based vendor Exotec which has an innovative goods-to-person (G2P) system featuring shuttles that travel vertically in racks as well as on the ground carrying individual totes. Well over $2 billion has been invested in mobile robot companies since the start of 2015 and more than 65 per cent of investment has been directed towards companies involved in supporting the order picking process for retailers and logistics companies.

Of the $1.5bn that has been invested in AMR companies supporting order fulfillment, goods-to-person (G2P) technology holds the lion’s share (See Fig. 2), with companies like Geek+, GreyOrange and Exotec all raising significant amounts. This is perhaps not surprising given the fact that goods-to-person AMRs are a relatively more mature technology in terms of deployment and market acceptance (in part due to Amazon’s usage of the technology). At the same time, G2P deployments are generally in the multi-million-dollar range and require significant capital and infrastructure, hence the high levels of investment capital required by the vendors of the technology in order to scale. 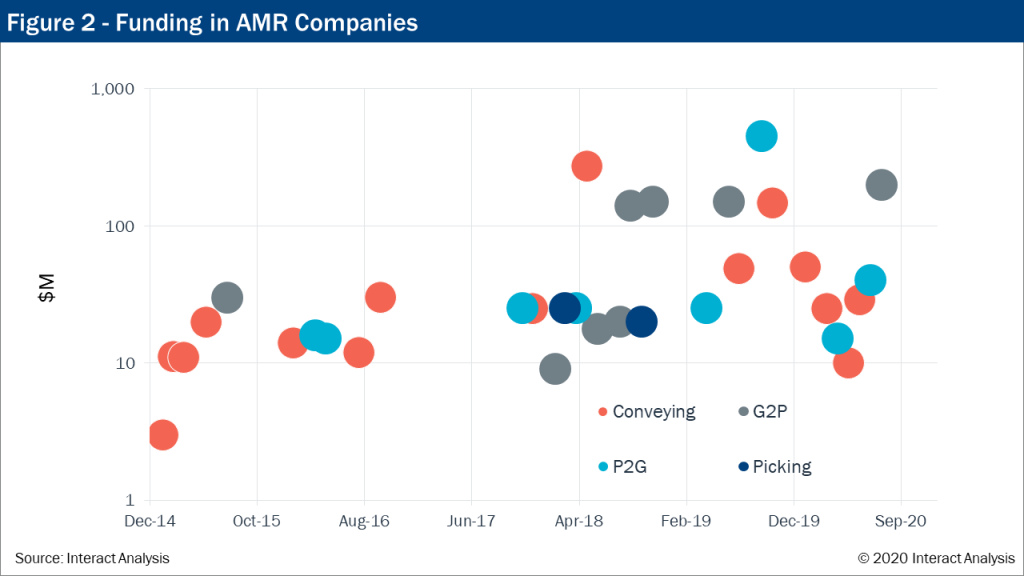 Are We Heading for a Price War?

Given the vast number of companies competing in this fledgling industry, concerns have been raised by many about the likelihood of severe price declines in the coming years as new entrants seek to disrupt the market by effectively buying market share. There are a large number of vendors from China that enjoy much lower cost bases and operate on slim margins. Many of these vendors are now seeking to extend their reach beyond the domestic market into Europe and the US.

In addition to the above points, there are also efforts being made by some industries and customer groups to standardize mobile robot interfaces so as to allow greater interoperability across vendors. Any moves in this direction will likely lead towards the commoditization of mobile robot hardware, and will possibly even remove mobile robot vendors from the software market.

In anticipation of future price declines, some more established vendors are seeking to standardize their vehicle platforms so that multiple types of vehicles and payloads can be served using the same chassis. This will help to lower production costs and allow them to ramp up volumes more efficiently and, at the same time, give them greater flexibility over price reductions.

Many vendors of AMRs see that the value of their solution is primarily within the software and productivity gains they can provide from workflow optimization. On the other hand, the robot hardware shows little differentiation between vendors and will likely commoditize as vendors focus on creating value from the software, as well as on maintaining revenues and profit from their software offerings. This is likely to lead to reduced prices for the hardware whilst potentially shifting the market more towards a subscription-based approach for the software.

There are factors however that could indicate positive pricing pressure in future: for example, safety standards are being introduced which will raise the minimum threshold for safety features and sensors. This can potentially make it harder for new or low-cost vendors to enter. We are also seeing many applications moving towards SLAM-based technology, which increases the cost of the robot.

Finally, it should be noted that this market is massively under-penetrated. AMR usage in warehouses around the world today is less than 1% and even with our bullish forecast barely surpasses 5% in the next five years (See Fig. 3). Similarly, automated forklift shipments are currently a small fraction of the million plus manual forklifts sold every year. It is very clear that there is huge headroom for growth in this industry for both AGVs and AMRs, and pricing pressure will likely be tempered by this fact. 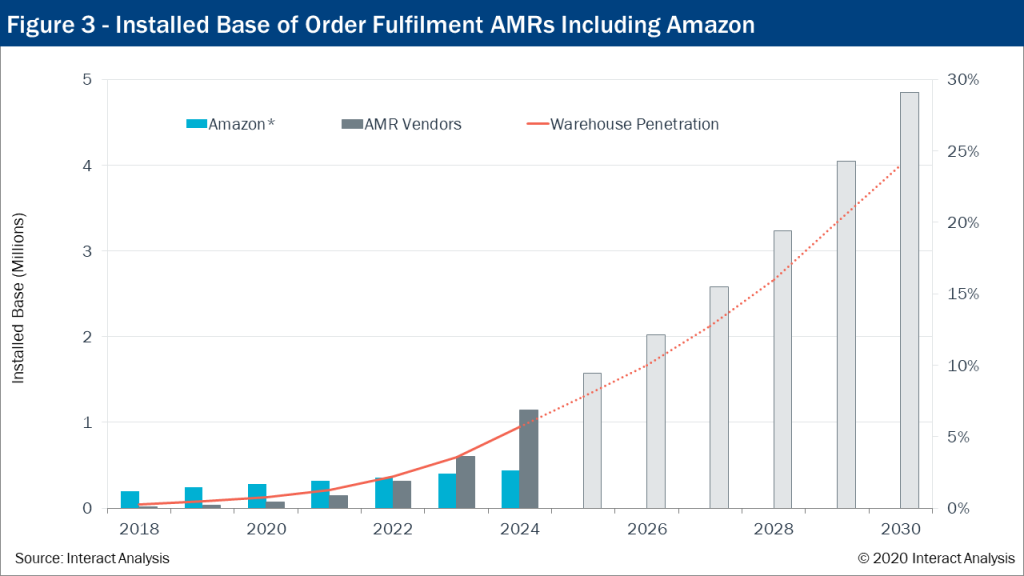