Mobile Robots in Logistics Centers Forecast to Surpass $3bn in 2022

Despite the market being worth just $300m in 2017, automated guided vehicles (AGVs) and autonomous mobile robots (AMRs) used in logistics applications are forecast to enjoy massive growth in the next five years and grow ten-fold to exceed $3bn in 2022, according to a new report from Interact Analysis. The report revealed that more than 400,000 mobile robots are predicted to be installed by the end of 2022.

Whilst AGVs have long been used in manufacturing environments to lower costs and improve efficiencies, logistics and fulfilment centers are a relatively new opportunity. The proliferation of ecommerce, omnichannel retailing and customer demands for faster and cheaper delivery are forcing logistics providers to look to automation to ease the pressure. These demands are compounded by a shortage of available workers, the time needed to train new employees and increasing wage costs. All these factors combined are driving up the ROI for mobile robots and shortening the payback time to under a year in some cases. 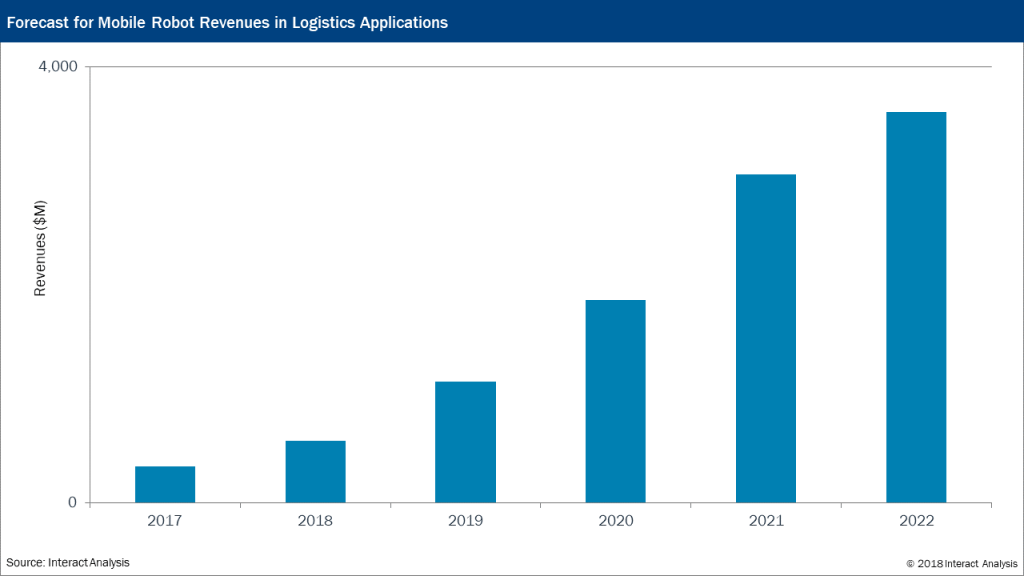 Given these underlying macro-drivers and the massive growth forecast for the future, it’s not surprising that investment dollars have been flowing into the growing number of mobile robot vendors coffers. Both Fetch Robotics and Locus Robotics raised $25m each in recent months (as discussed in our previous analyst insight).

Several mobile robot companies have emerged since the acquisition of Kiva Systems by Amazon in 2012, and the subsequent technology vacuum that resulted. Many of the companies – notably all from Asia – have gone to market with a similar product and solution as Kiva. Whilst they’re seeing initial success, and indeed we forecast substantial growth in the next couple of years, our assessment is that this growth may be short-lived and other approaches will surpass them.

The ‘Kiva’ approach of moving mobile racks around a fulfilment center requires substantial infrastructure changes and so is not always well suited for brownfield sites, or for smaller customers that wish to avoid such large capital investment and disruption to their operations. Similarly, the deployment of a very large number of robots in the field that could require substantial servicing and maintenance, as well as having to be fenced off from human workers could be problematic.

Our research found a more promising outlook for collaborative mobile robots, that can work in partnership with human workers to improve throughput and at the same time ease the demands coming from labor constraints. AMRs which improve throughput through guiding human pickers, and those that replace manual forklifts and trolleys are tipped for robust growth. Robots – which can be deck-load, tuggers or forklift in design – can be added in phases and scaled after an initial pilot, and in-line with the customers growth in a less capital intense way.

Aside from the well-document case of Amazon, other retailers, ecommerce companies and logistics providers are adopting mobile robots at an increasing pace, and we believe the industry is close to a tipping point for mass adoption and tremendous growth.

Multi-national logistics companies such as DHL and FedEX have been deploying mobile robots (from multiple vendors) over the past couple of years and we understand that this rollout is likely to accelerate. Similarly, major Chinese ecommerce companies have also begun adopting mobile robots in their facilities. China is one of the most promising markets for mobile robots identified in our report. Many of the companies deploying mobile robots are only now building out their logistics infrastructure and the complexity and cost of incorporating mobile robots and automation within greenfield sites is considerably lower than for existing warehouses. Alibaba for instance has deployed 100 Quicktron robots at a single facility and we anticipate many more in the next 18 months. Furthermore, our report revealed that the Chinese (logistic) mobile robot market is forecast to almost triple in size in 2018. 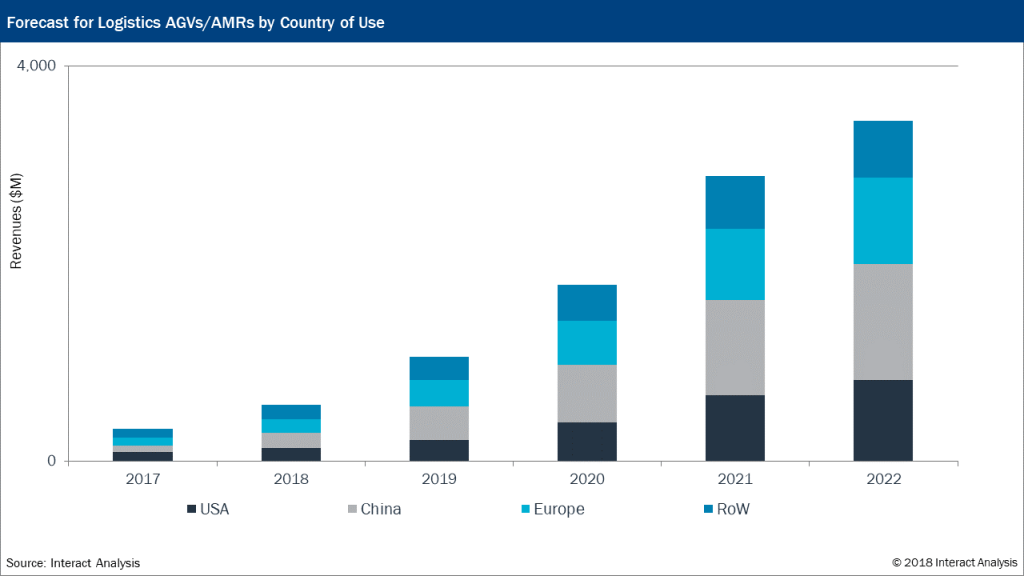 The Mobile Robots – 2018 report, which features more than 100 pages of analysis and 65 data tables and forecasts also revealed that although robots equipped with articulated arms to perform piece picking in warehouses may be the most technologically advanced, their relatively high-cost and lower productivity means that they will remain a relative niche – for the next couple of years at least. Deck-load AMRs, on the other hand, are forecast to see huge growth and account for around 60% of total revenues over the next five years. Similarly, robust growth is also forecast for tugger and fork-lift type robots.

The deployment of such robots is forecast to save the logistics industry over $4bn in direct labor costs by 2022, even after the additional costs of the robots and associate infrastructure are deducted. Close to $7bn in total will be saved over the next five years according to the report. Assuming that more than 400,000 mobile robots will be in operation by the end of 2022, a similar number of human roles (or openings) could be eliminated from the logistics sector leading to an annual saving of more than $4bn.

The above analysis is taken from a new Interact Analysis report – “Mobile Robots – 2018“, an in-depth report on mobile robots used in material handling applications which was published earlier this week. If you’d like to learn more about the report or have any questions, please contact us at info@interactanalysis.com