“Made in China” Increasingly Means “Made by Robots”

According to our latest research, 2017 was a record year for the global industrial robot market. Following a notable uptick in growth, which started during the second half of 2016, the market increased by 20% in revenue terms and 31% in unit terms in 2017. By 2022, we forecast the global market will reach over $15bn.

Importantly, it’s worth noting that the global growth rate has been influenced most significantly by China, which accounted for almost 30% of the global industrial robot revenues in 2017 – the region also contributed almost 50% of the total value of revenue growth. Comparatively, revenues across the rest of the world grew by around 13% in 2017, whilst revenues for China grew by nearly 40% over 2016 figures; and unit shipments grew by roughly 60%. Many industrial robot suppliers experienced >50% unit growth for their business in China during this period.

Although the market growth rate for China is forecast to slow for 2018, it is still expected to see double digit growth. Furthermore, it will remain the fastest growing regional market globally, and consequently we predict its revenue share will increase to over 40% by 2022. 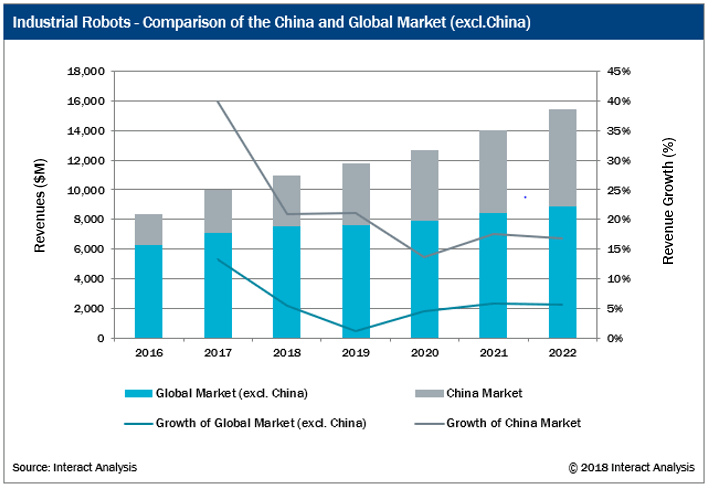 Where does China’s stronger growth come from, and how is that impacting the global industrial robot market structure?

Rising labor cost, a lack of skilled labor, the desire to improve efficiency and enhance product quality, and manufacturing’s transition from mass production to low-volume & high-product mix (with shorter and faster product cycles) have always been the main drivers for growth in the industrial robot market globally; and the same drivers hold true in China. However, things that differentiate China from other regions globally are its substantial manufacturing scale and the concentrated outbreak of all these issues mentioned above at a single point in time!

The electric and electronics industry, especially the 3C industry (Computer, Communication and Consumer Electronics), which has experienced explosive demand for industrial robots more recently, offers a quite typical example of the “perfect storm” of factors that have combined to stimulate Chinese industrial robot demand.

Apart from the surge in units, the electric and electronics industry also bring in much changes to the product mix of the market because applications used in this industry is very different from that in automotive.

Interact Analysis will continue tracking robot related markets and trends. If you would like to receive regular free updates on the robot industry, please register here.