China was the first country to be hit by the COVID-19 pandemic, and the authorities’ fierce suppression of the virus has meant it was the first major region to emerge from it. In the Chinese manufacturing sector, the recovery was particularly striking, to the extent that by mid-April 2020, the operating rate of Chinese industrial enterprises exceeded 90%. Interact Analysis has published its latest update to its Manufacturing Industry Output Tracker (MIO). This latest edition of the MIO confirms the upwards revisions to predictions made in November 2020. The return to growth for China’s manufacturing industry in Q3 of 2020, and sustained growth in Q4 has turned Interact Analysis’s forecast for the full-year from negative to positive. We now expect that China will enjoy a +1.9% increase in overall manufacturing output for 2020, as opposed to our forecast back in August, which suggested a -3.5% decline. 6.0% growth is expected for 2021. This is good news for China.

Rapid rebound for many industries, including automotive

The national Bureau of Statistics of China has reported that the total value-added of industrial enterprises increased by 2.8% last year. The chart below illustrates the significant bounce back in the second half of the year for many industrial sectors; railways, shipbuilding and aerospace being the exception. 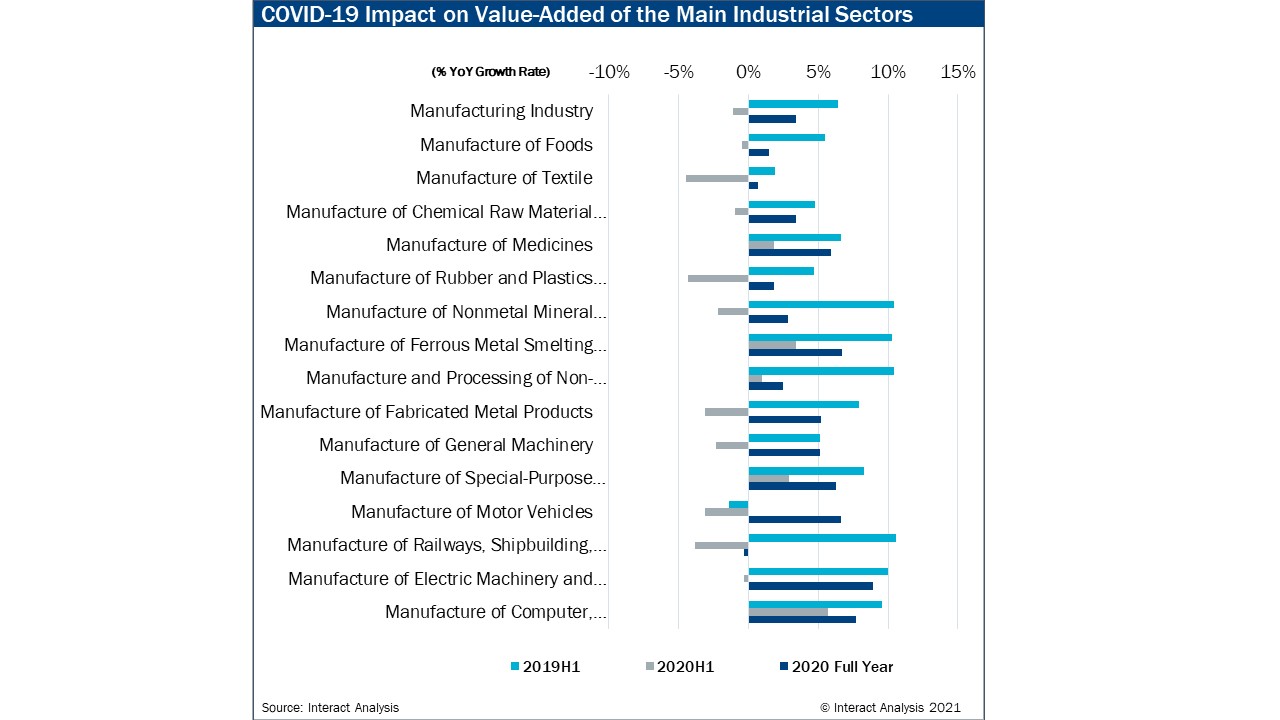 By comparing the dark blue bar (2020 full year) and the grey bar (2020H1) in the chart above, we can clearly see that the year-on-year growth of most industries has recovered to positive levels, showing a significant improvement on the first half of the year.

The production of industrial robots, new energy vehicles, integrated circuits and micro computer equipment grew by 19%, 17.3%, 16.2% and 12.7% year-on-year, respectively. Significantly, the growth rate of the automotive industry increased compared to 2019. This is quite exceptional given that on a global level the automotive sector has been a serious casualty of the pandemic.

A range of indices point to the strength of the recovery

The recovery of China’s manufacturing confidence from the second quarter of 2020 onwards is reflected in the manufacturing PMI, a market sentiment indicator, which clearly describes a v-shaped recovery coming out of Q1. 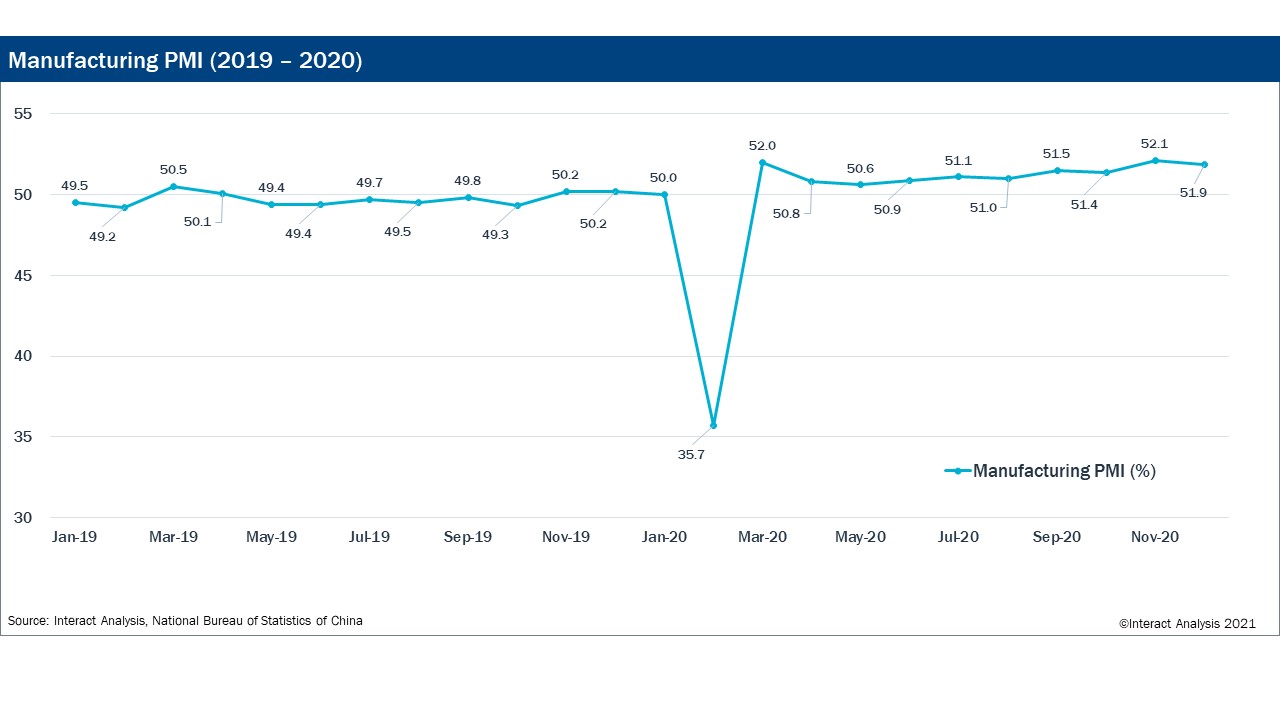 In December 2020 China’s (PMI) was 51.9%, down by 0.2% from the previous month, but it was above the 50.0% threshold for ten consecutive months, indicating that manufacturing industry has continued to make a steady recovery.

Of the five sub-indices composing PMI, the production index and the new orders index were above the threshold, while the supplier delivery time index, main raw materials inventory index and employment index were below. The production index was 54.2%, down by 0.5 percentage points from last month, but it still stayed above the threshold, indicating that the growth rate of manufacturing production has slightly slowed down but is still higher than the value posted in August.

The new orders index was 53.6 percent, down by 0.3 percentage points from the previous month, but it still stayed above the threshold, indicating that demand was continuing to grow. The supplier delivery time index dipped just below the threshold from 50.1% in November to 49.9% in December, indicating that the delivery time of raw material suppliers in the manufacturing industry was slightly slower than that of last month and slightly down from the August value. In spite of the slight dips, the scores for these three indices ensured that the overall PMI stayed above the threshold.

The performance of China’s Q3 2020 export market has been a key influencer impacting China’s full-year outlook for 2020. Both import and export operations in the region have been improving. The total value of imports and exports for the first three quarters combined increased by 0.7% year-on-year. Across the year so far, Q1 fell by -6.5%, Q2 fell by -0.2%, and Q3 rose by 7.5%. In December, the growth rate of exports dipped slightly by 3% month-on-month, however, it remained 18.1% up on the 2019 value. As of December, China’s exports have achieved positive year-on-year growth for seven consecutive months. 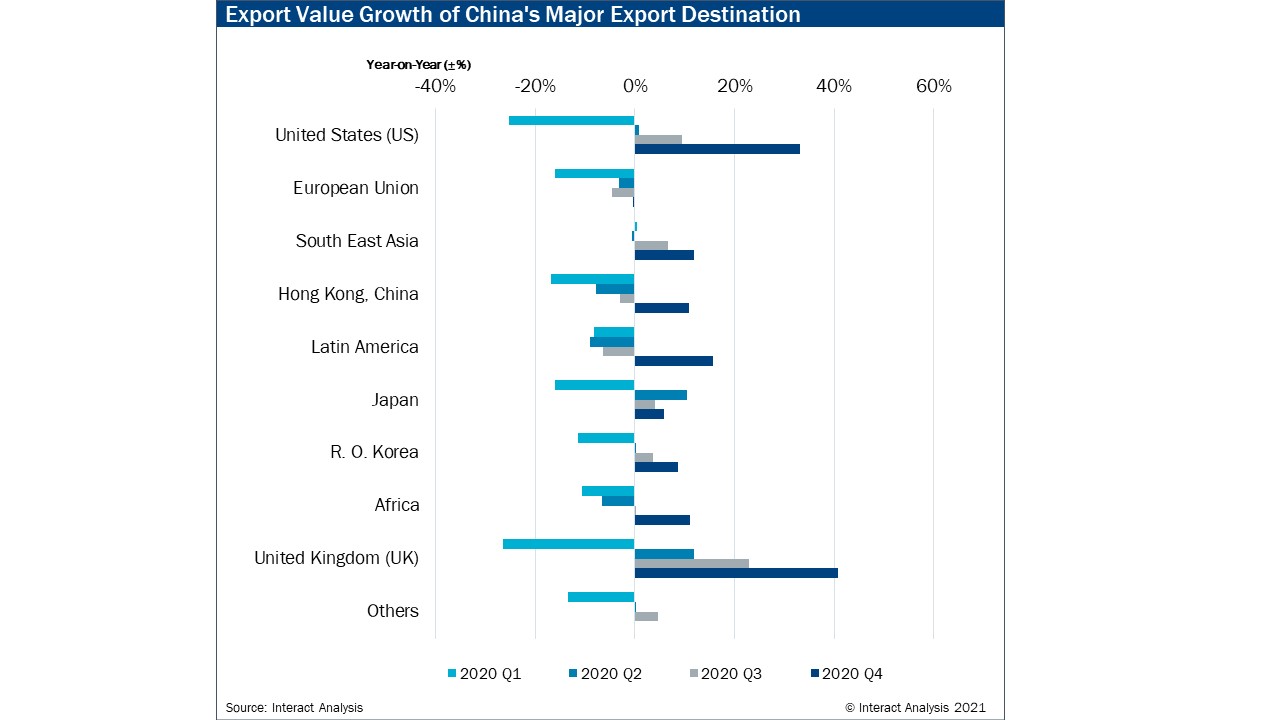 The trend of export recovery is clear. Exports to the EU and the US increased significantly in the last quarter of 2020, but they were already doing well. In the first three quarters, the growth rate of China’s exports of mechanical and electrical products increased by 5.5% month-on-month, and the growth rate of exports of electronic products such as notebook computers and home appliances exceeded 17% year-on-year. The export of auto parts and chemicals also improved. The pandemic caused a cut in domestic production capacity in Europe and North America so Chinese goods filled the gap. China’s domestic demand is also seeing growth, so there is a high probability that China’s manufacturing output growth rate continued to increase going into 2021. 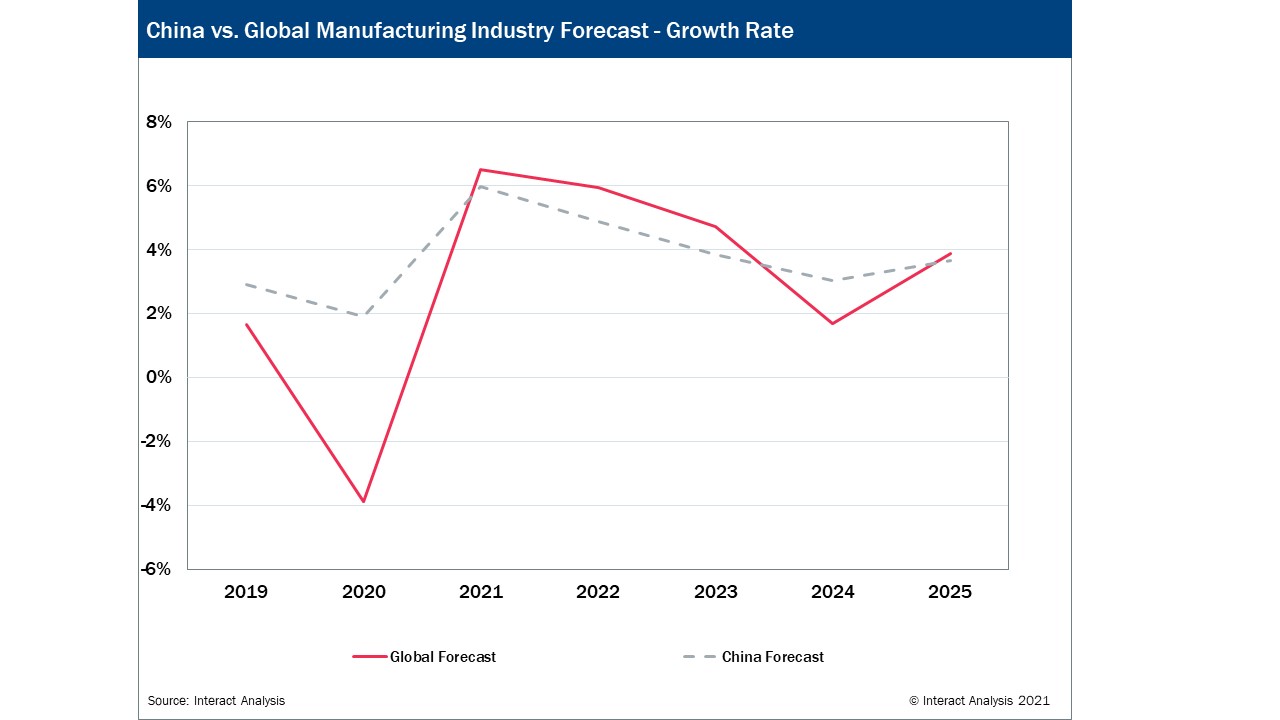 The above chart shows that China’s manufacturing industry recovery is setting the pace globally, and defying expectations. While global manufacturing output growth is expected to drop by -3.9% in 2020, it will increase by +1.9% in China. The latest data suggests that, in 2021, both global and Chinese manufacturing output will increase by more than 6%, as we hopefully leave the pandemic behind us. The robustness of China’s industrial chain has shown through during the pandemic. And increased investment in automation upgrades is likely to further consolidate the position and share of China’s manufacturing industry overall.

To continue the conversation about manufacturing industry output, get in touch with our CEO Adrian Lloyd directly: Adrian.Lloyd@InteractAnalysis.com 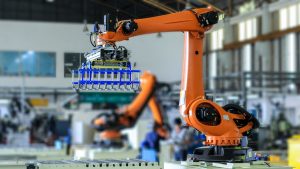 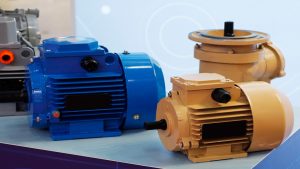