Manufacturing Output In The Covid World: Interact Analysis Shines A Light On Argentina

In a major widening of the scope of its Manufacturing Industry Output (MIO) Tracker, Interact Analysis has brought a new country into its stable. The inclusion of Argentina brings the list of countries covered by the MIO Tracker up to 39, further increasing its already unmatched global coverage. Previous users of the MIO Tracker should note that all data sets have been revised to include Argentina, so historic aggregates from previous editions will appear smaller due to the fact that Argentina previously did not feature.

In recognition of the growing economic importance of South America, Interact Analysis has increased its coverage of the continent by adding Argentina. This is the third expansion into the area after Mexico and Brazil. Though Argentina is, on the global stage, a relatively small economy, it is the third largest in South America with an estimated nominal GDP in 2019 of $445 billion (IMF 2019). Argentina is an interesting addition to the MIO, as it is the first hyper-inflated economy to be covered. The Financial Times recently placed it in the top five inflated economies in the world, after Venezuela, Zimbabwe, South Sudan, and Sudan. The Argentinian Peso to US dollar exchange rate slid from 3.1 in 2007 down to 72.9 in 2019 (IMF 2019) and is currently forecast to keep dropping in value. However, though the currency has been sliding, Argentina has a strong manufacturing base, and has managed to keep production relatively constant. The new research published in the MIO Tracker says this is interesting insofar as it could provide a potential model for the outlook for other manufacturing regions when serious inflation sets in.

From peasant farming to agribusiness

Recent decades have seen a revolution in Argentina’s huge agricultural sector. Peasant farming has, not always smoothly, given way to big business as the marketing and export potential of the country’s agricultural produce was recognised. Argentina is a world leading producer of foodstuffs, being the third largest provider of soya beans, the fourth largest producer of sunflower products, and among the largest beef producers in the world. Agribusiness is a major player in Argentina’s highly diversified economy, which also includes pharmaceuticals, automotive, energy and biotechnology. In addition, it has considerable shale oil and shale gas reserves, and is rich in minerals: gold, copper, silver, and lithium.

Industry production, as opposed to production of machinery, accounted for over 95% of the country’s manufacturing output in 2019. The country’s top industrial production sector is, unsurprisingly, the food and beverage sector, occupying 38.5% of total industrial production in 2019. Argentina is well-positioned to reap the benefits of the rising global demand for food. Other important sectors were: chemical & pharmaceuticals (12.8%); metals (9.2%); automotive (6%) and commercial vehicles (5%). 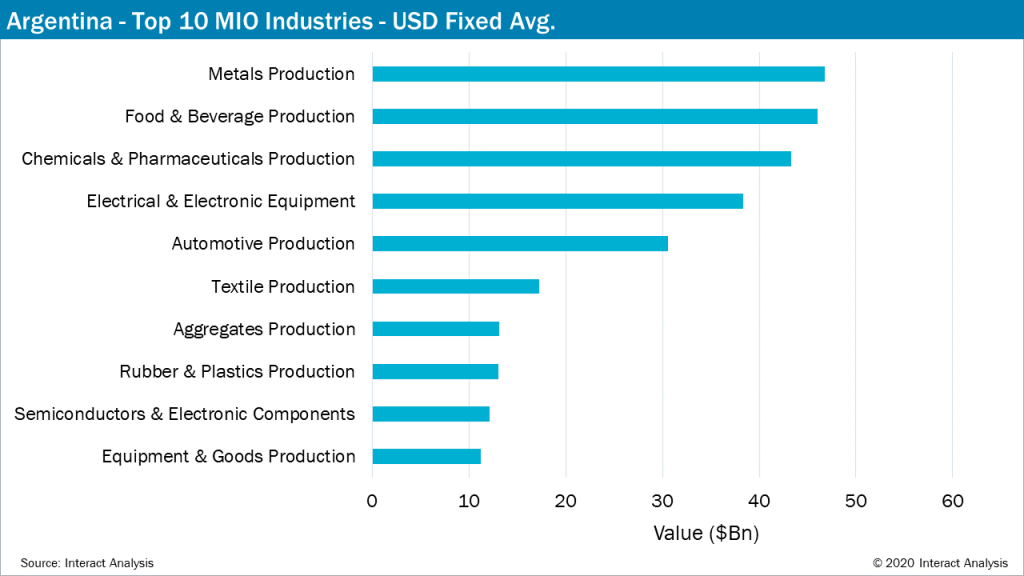 The country’s largest machinery sector was, again, predictably, farming machinery. The largest companies producing locally in this sector include AGCO Argentina, Agrale, and Deere & Company. Argentina has a long-established local industry manufacturing farm machinery. The sector is composed of approximately 730 companies. Domestic production of agricultural machinery  accounts for around 80% of the total sector. Government stimulus of local production has caused multinationals to incorporate more than 50% locally-made components in their manufactured machinery. One other large machinery sector worth mentioning is heating, ventilation, air-conditioning and refrigeration, which accounted for just under 13% of machinery production in the country.

The IMF is forecasting that the strength of the Argentinian Peso will continue to deteriorate over the period of the MIO forecast (2020-2025). Hyperinflation is therefore expected to increase. The economic outlook for the country varies hugely depending on whether one uses a fixed or a float currency method. In fixed US dollar terms, 2020 growth remains positive at +3.8%. However, in float USD terms, the Argentine economy shows a significant decline of -31.0% in the same period. This means the variation in CAGR of total manufactured output for the country is also high: 25.3% in fixed terms, but only 6.8% in float terms. For an emerging economy, either figure represents strong growth but, as with many other countries in Latin America, the instability of the Peso is a major limiting factor on growth. This is compounded by the fact that Argentina sits at number nine in the global COVID-19 infections league table, with 1.42 million cases as of 1st December: another major factor in the weakness of the 2020 Argentina forecast.

So, mixed fortunes for the new kid in the MIO, but Argentina is definitely one to watch.