Who are the Leading Vendors of Mobile Hydraulics?

Global sales of hydraulics used in mobile applications saw strong growth in 2017 and reached nearly $14.8bn. Early indicators for 2018 suggest that the upward growth trend the market saw in 2016 and 2017 has begun to level off. For a market which operates on three to four-year cycles, this levelling off signals that we are nearing, or have already reached the peak of the mobile hydraulic market’s current cycle and can expect a decline beginning 2019 to 2020.

Below are the market shares and rankings for the leading providers of hydraulics to mobile applications in 2017. These shares were calculated following interviews with vendors over a five-month period. The products we considered are hydraulic pumps, motors, valves, and cylinders sold into mobile applications (excluding automotive). Products such as hoses, fittings, accumulators, filters, etc., were not considered in our numbers. 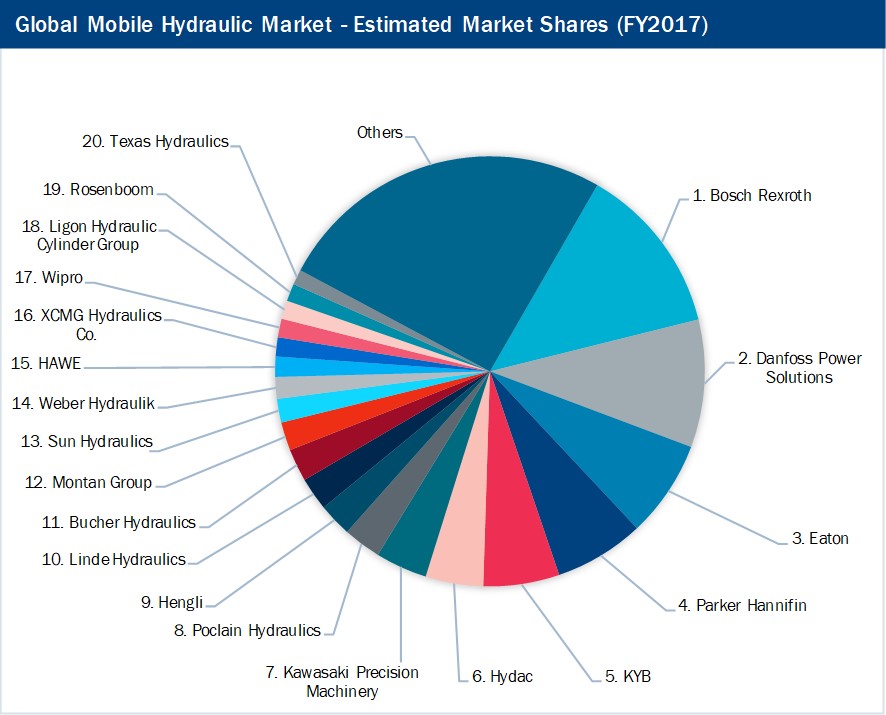 The traditional big four: Bosch Rexroth, Danfoss, Eaton, and Parker Hannifin have maintained their stance as the market leaders for hydraulic pumps, motors, and valves. Both Bosch Rexroth and Danfoss are enjoying double–digit market shares, with Bosch Rexroth maintaining its top spot by a comfortable margin. This margin could become less comfortable in the coming years, however, if Danfoss’s bet on electrification takes form – which it likely will.

Off-highway vehicle electrification has been a topic of discussion for nearly a decade now but recent developments like the announcement from Volvo CE to launch a line of fully electric compact excavators and wheel loaders by 2020, indicate that the trend is beginning to show real, tangible momentum. Actions by Danfoss in recent years, like its acquisitions of Visedo and Axco, an electric drivetrain vendor and electric motor vendor respectively, show the company’s desire to get ahead of this trend. When you also factor in the company’s strengths in both variable frequency inverters and power semiconductors, you quickly see that Danfoss is in a unique position to benefit from off-highway electrification.

Eaton, Hydac, and Poclain Hydraulics are just a few other examples of hydraulic vendors beginning to develop eMobility solutions as part of their product offerings… and with good reason. Below is Interact Analysis’ forecast for off-highway vehicle demand by powertrain type: 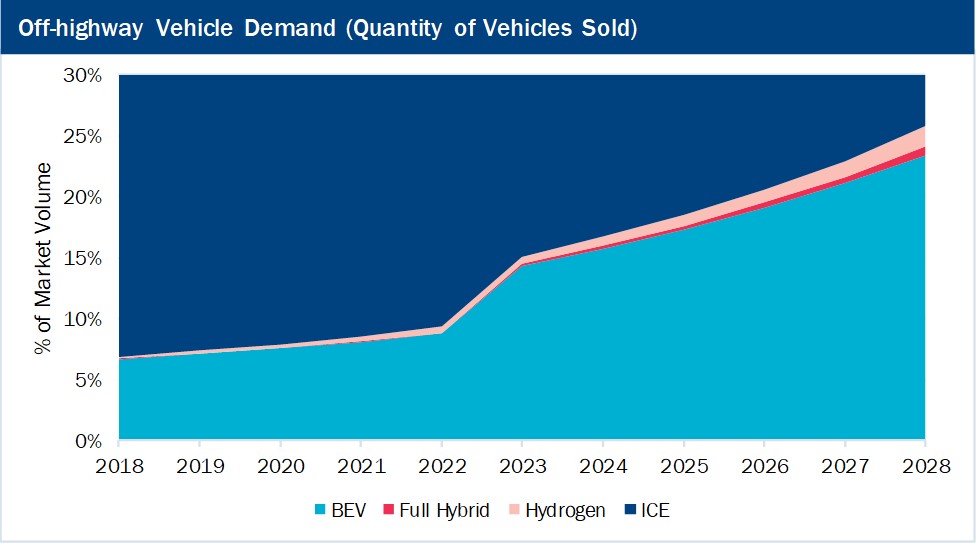 This chart shows an increasing presence of electric vehicles in the off-highway market over the next 10 years. While the penetration rate is small now, an increase of 5-10% would have a significant negative impact on the mobile hydraulics market. This impact would, in many cases, manifest as complete hydraulic replacement in low horsepower vehicles. In applications that require a higher power density, however, the impact is more nuanced. In these sorts of applications, electrification typically means hydraulics would still be used for actuation, but the power behind the hydraulic system would be an electric motor. This type of system requires vendors to reassess the design of their products to offer the greatest efficiency when coupled with an electric motor.

One example of this change in design, which can be cited from our interviews, is the potential for the control of flow to be handled by varying the speed of the electric motor, rather than handled mechanically inside a variable piston pump. This change, while seemingly small, would drastically change how the hydraulic system operates and is just one example of the many potential changes that could result as part of electrification.

Make in China, Buy in China

For years, Chinese OEMs either sourced mobile hydraulics from international suppliers or produced them internally. In our interviews, we heard horror stories of delivery times from international suppliers of 50+ weeks. These stories have spurred a desire for greater flexibility and shorter lead times in the Chinese mobile hydraulic market. This desire for localization in Chinese hydraulic manufacturing has offered significant growth opportunity to domestic suppliers and perhaps no company better exemplifies this than Hengli Hydraulic Co.

Hengli entered the market as a manufacturer of hydraulic cylinders in the early 90s. This is a common tactic used by new entrants, as cylinders are the simplest product to manufacture when compared with pumps, motors, and valves. Hengli focused primarily on selling its cylinders to the Chinese excavator market where it now holds an estimated 70% share. The recent development, which speaks to the increased desire for localization in the Chinese market, stems from the company’s introduction of hydraulic pumps to their portfolio. Upon introducing the product to market, Hengli’s share of pumps sold to the Chinese excavator market jumped from 0% to an estimated 60% in just two years. This kind of jump in share clearly demonstrates China’s desire for more domestic suppliers. As a result, foreign suppliers, particularly ones without manufacturing facilities in China, are likely to face decreasing share in the region.

About the Mobile Hydraulic Market – 2019 Report