Mobile Robot Market Grew 22 Percent in First Half of 2018

Despite seeing a long-term growth trend, AGV demand dipped in the first half of 2018. Q1’18 was a particularly weak quarter for AGVs, dragging down performance overall for the first half of the year with revenues basically flat compared to 1H 2017. A large part of demand for AGVs is project-based and hence suppliers see considerable fluctuations between quarters occurs due to the “lumpy” nature of the market.

Conversely, AMR demand remained robust in the first six months of 2018. Revenues grew by more than 90 percent in the first half of 2018 to nearly $250m, whilst shipments more than doubled. 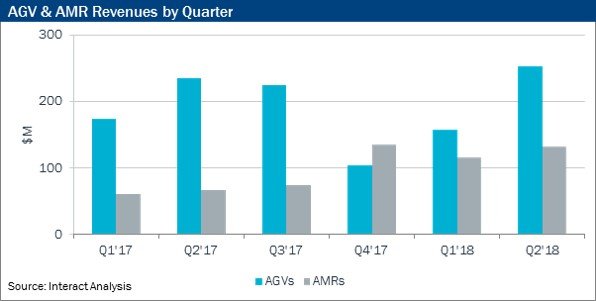 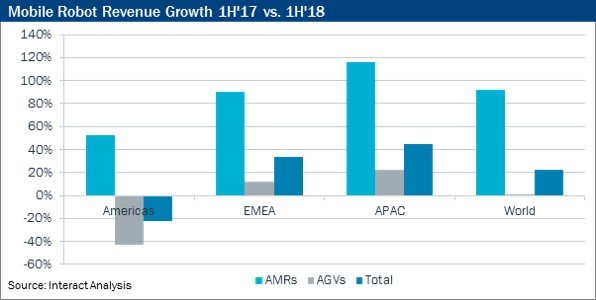 Most of the additional revenue growth achieved in 1H’18 came from deck-load AGVs and AMRs. These products accounted for more than half of the market and grew by a staggering 55 percent in 1H’18. Tugger/pull type mobile robots also performed strongly, growing at a double-digit pace, yet account for a relatively small part of the industry. Forklift type AGVs/AMRs are typically much more expensive than other mobile robots and orders are more sporadic in nature. Revenues from these products dipped in the first two half of this year by roughly 7 percent.