With the environmental goal of reducing air pollution in some of the world’s most polluted cities and the strategic goal of dominating the electric vehicle supply chain, China has adopted an aggressive subsidy programme to help boost the uptake of electric passenger and commercial vehicles.

It’s no surprise, therefore, that big changes in China’s subsidy policy will have a significant impact on global battery electric commercial vehicle volumes.  Whilst it was known that China would be phasing out its subsidies by 2020, the extent to which it reduced its subsidies in 2019 was unexpected with some segments losing more than 70% of the subsidies they previously enjoyed.  In a recent insight, we provided a thorough dissection and analysis of China’s new subsidy policy. Interact Analysis is now the first forecaster to update its Hybrid and Electric Buses and Trucks forecast to reflect the changes. Most affected will be the medium and heavy-duty segments (figure 1). 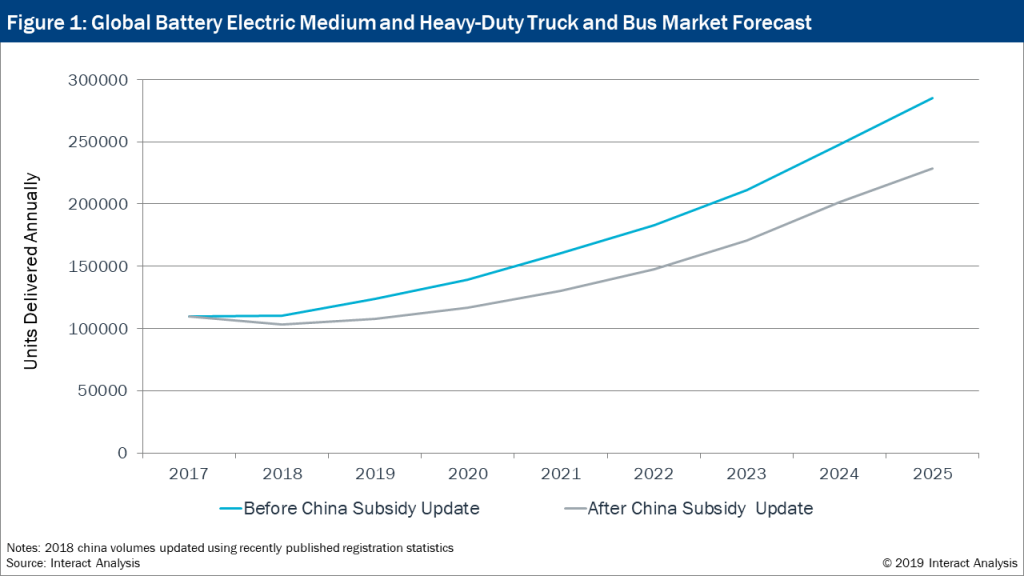 Some segments left worse off than others

It’s clear that the global market for battery electric commercial vehicles is highly sensitive to China’s new energy vehicle policy and its most recent change will significantly reduce global volumes for the forecast period.

That being said, the city bus and light-duty truck segments are forecast to maintain their current trajectories with little impact from the 2019 subsidy changes. Given that 90% of battery electric commercial vehicles delivered in 2025 are forecast to come from these two segments, there’s no question that China is set to continue enjoying its market leader position for the time being.

The ‘Hybrid and Electric Truck and Bus – 2019’ market forecast provides a comprehensive analysis of the current and future global demand for electrified commercial vehicles. With offices in Europe, North America and China, Interact Analysis has conducted over 50 in-depth research interviews with leading OEMs, suppliers and policy makers across the globe.