We recently attended the 10th International Rechargeable Battery Expo (Japan Battery Show) in Tokyo, which saw many companies from across the whole industry chain come together. Although lithium-ion battery technology is well established, with the vigorous development of electric vehicle industry, many new trends have appeared in recent years. Our discussions with exhibitors and attendees at the show revealed some new trends in technology development, manufacturing equipment and application fields.

Here are some of our key findings:

To increase the battery energy density and, at the same time, eliminate the impact of rising cobalt prices on the cost of battery cells; power battery manufacturers continue to increase the nickel content of their products. When it comes to ternary materials, nickel-cobalt-manganese (NCM) materials are common, with models ranging from 111 (N:C:M=1:1:1) to 433,532,622,811 (N:C:M=8:1:1). As the nickel content increases, the energy density of the battery is correspondingly improved. The energy density of the 111-type ternary battery is about 180 Wh/kg and, for the 811 types, the energy density can reach 280 Wh/kg (see figure 1 below). For example, LG Chem will upgrade its third-generation lithium-ion batteries from NCM622 to NCM811 for mass production in 2021, said Mr. Myung Hwan Kim, the president of Battery R&D. 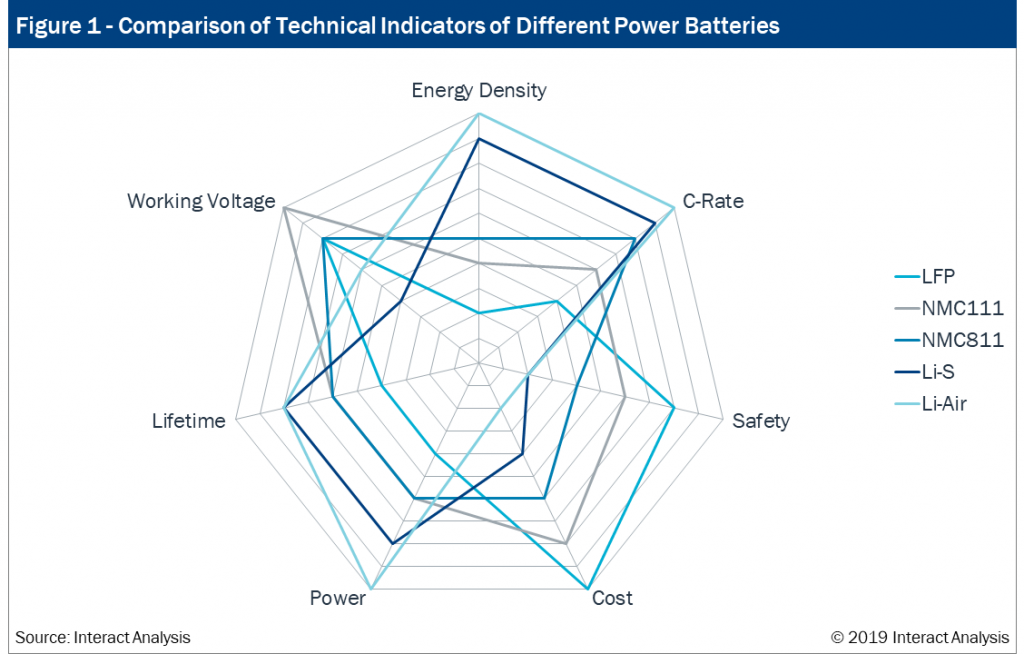 In December 2017, the Technology Roadmap for Energy Saving and New Energy Vehicles issued by SAE-China proposed that the single cell energy density of pure electric vehicle power batteries should reach 300 Wh/kg in 2020, 400 Wh/kg in 2025 and 500 Wh/kg in 2030, which is basically consistent with the plans of Japan, Europe and other countries and regions. However, it exceeds the current upper energy density limit for liquid lithium-ion batteries and means that new technologies will be required. With advantages like high safety, high energy density, long life, and lightweight, large numbers of automobile and battery companies around the world continue to increase investments in solid-state batteries to meet the ambitious country and regional goals. Lithium-rich manganese, Li-S, and Li-Air are all in the category of solid-state batteries.

At the exhibition, we saw that all-solid-state batteries have made some breakthroughs in the aerospace and consumer electronics industries. Hitachi Zosen (Hitz) demonstrated the all-solid-state lithium battery “AS-LiB” using sulphide-based materials as electrolytes. It plans to start mass production in 2019 and be used in the aerospace field (a project named JAXA) and then be put into the automotive market after 2025. FDK, a Japanese battery manufacturer, has unveiled an ultra-small all-solid-state battery sample with millimetre size, which can be made into very small power supply devices and integrated into the field of micro-electro-mechanical systems (MEMS), thus facilitating the application of batteries in new smart electronic devices of small size.

However, considering the high manufacturing costs and technical production requirements, solid-state batteries for automobiles are still in the research and development stage, far from entering the stage of mass production. The consensus of most manufacturers is that solid-state batteries should be popularized in the field of consumer electronics first. After enough market testing and 1-2 years of vehicle testing and verification, they can be truly used in automobiles. This process will take at least 5-7 years in total.

The production process of lithium-ion batteries can be divided into electrode manufacturing (forepart equipment), cell assembly (midpiece equipment), battery testing and packaging (back-end equipment). At present, most battery factories still adopt fragmented processing, which cuts the whole process into several segments, purchasing equipment from different companies or even outsourcing directly to equipment factories for processing. However, forepart equipment giants such as Wuxi Lead Intelligent Equipment  and YINGHE Technology  have started to sell equipment for the whole production line and have already won orders.

In nearly 30 specific production steps, the higher technology content steps are mainly concentrated in the forepart, including winding, striping, coating and so on, which directly determine the quality of batteries. This part of the market is currently more competitive, and there are many players from the semiconductor or automation industry. The non-standardized midpiece and back-end equipment are more closely related to the actual terminal applications and closer to customized machines. At present, most players only focus on the lithium-ion industry, and Chinese vendors have occupied most of the market share. At the same time, battery pack and BMS (Battery Management System) manufacturers are increasingly demanding vision, positioning and testing equipment.

Some minor technological changes, such as the change from cylindrical 18650 to 21700 cells, has less impact on the equipment, with only the fixture or equipment parameters needing to be adjusted. Due to the diversification of lithium-ion battery technology routes and the continuous iteration of products, the demand for new lithium-ion equipment is still rising. In addition to the exploration of cathode materials, the rise of pouch cell packaging in the electric vehicle market has also created some new opportunities. The manufacturing equipment used for the pouch and prismatic li-ion batteries is basically the same as the equipment used for stirring, coating and rolling in the forepart; however, there are great differences in the back-end processes such as liquid injection and packaging. Thus, more special requirements and demand are put forward for the midpiece and back-end production equipment, which enables manufacturers who have mastered the core technology of such equipment to take the lead in a fast-growing market.

According to the scope of our “Lithium-ion Battery Production & Supply – 2019” report which will be published in April, we classify lithium-ion batteries into three categories: power (EV), energy storage (ESS) and consumer electronics (CE) according to different application scenarios (see figure 2 below). 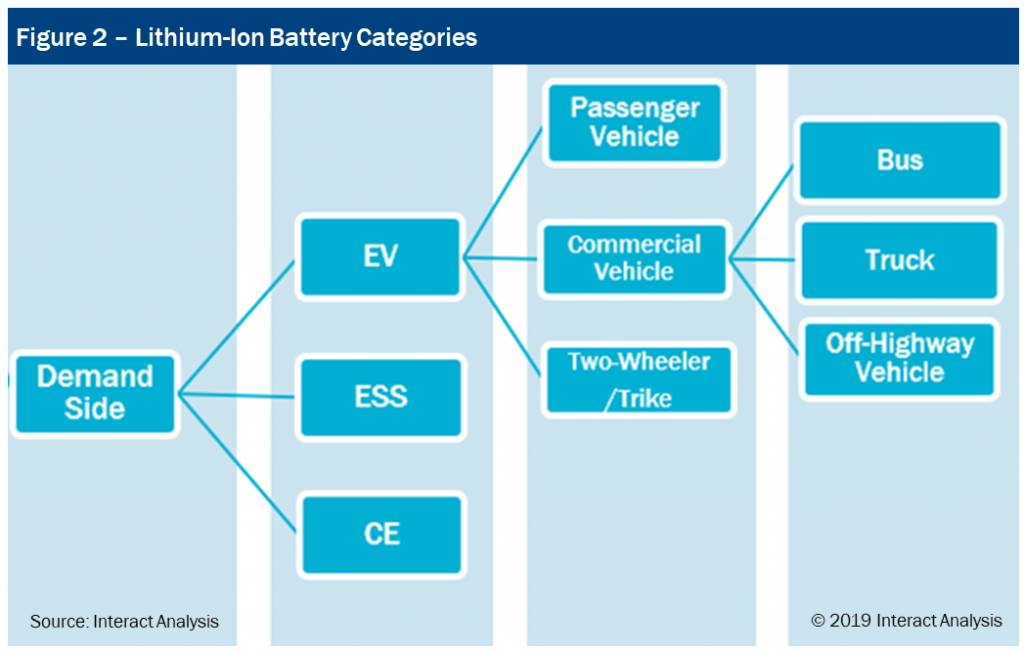 Traditional consumer Li-ion batteries are mainly used in mobile phones, computers, and other electronic products. At present, the market of these products has become more mature, and the growth rate has slowed down. With the strong rise of the electric vehicle market, power batteries have become a strong growth point in the Li-ion battery industry. They have surpassed the consumer battery market worldwide since 2015 and become the main demand. They are also our main areas of concern and are further subdivided into passenger electric vehicles, buses, trucks, off-highway vehicles and electric two-wheelers/trike. Although the current market size of the energy storage battery is relatively small, it is the fastest growing area over the past three years.

In the Tokyo exhibition, lithium-ion batteries for energy storage and electric two-wheelers/trikes have many bright spots. Toyota, Toshiba, and Panasonic have all introduced new household energy storage systems (ESS), whilst Taiwanese manufacturers represented by E-One Moli Energy and AMITA Tech are deploying utility-scale in Southeast Asia. Preliminary statistics show that the production of lithium-ion batteries for ESS exceeded 2GWh for the first time in 2018.

Electric two-wheelers/trikes is a special regional market. 70% of the world’s motorcycles are produced in Taiwan and Southeast Asia, which has also spawned some niche areas, such as the start-up GUS Technology, which produces high energy density pouch batteries for high-end heavy motorcycles. In Asia’s emerging markets, especially India, two-wheelers (mainly motorcycles) account for more than 70% of road vehicles, while they account for 30% of the country’s air pollution sources. The replacement of lead-acid batteries by lithium batteries is a general trend in any industry, but it has not been developed in the two-wheeler/trike market to date. The key reason is the price. At present, the penetration rate of lithium-ion batteries in the field of two-wheelers/trikes is less than 10%, but with the further tightening of environmental protection policies and the declining price of lithium-ion batteries prices, the market will develop rapidly.