The first half of 2020 saw cities locked down, production halted, roads emptied of vehicles, clear, unpolluted skies, and a realisation among many that we could live our lives differently. With the roar of the internal combustion engine silenced, people walked the streets in peace. Air pollution became a hot topic, with experts claiming that breathing dirty air damaged our lungs making us more vulnerable to the virus.

Climate change and pollution have placed vehicle electrification high up on the agenda. But how can OEMs match the demands of a need to get back to pre-COVID output with pressures to reduce emissions? In this insight, Interact Analysis focuses on the challenges facing the commercial vehicle sector.

The global COVID-19 pandemic had a dramatic impact on the commercial vehicle market as vehicle manufacturers and associated companies cut back or shut down production as the virus hit and lockdowns were applied across the world. Interact Analysis predicts that in 2020 the commercial vehicle market as a whole will see a contraction of over 15%. The COVID-related boom in online shopping means that production of light-duty last-mile vehicles will fare the best, whereas heavy-duty truck and bus markets will see major contractions owing to the high capital outlay, drop in demand for freight and dwindling passenger numbers on public vehicles.

In the UK, Mike Hawes, SMMT chief executive describes the challenges that lay ahead:

“The foundations of UK commercial vehicle production are strong, but manufacturers have been hit hard by the pandemic and factory shutdowns are costing the sector and economy billions. While many businesses have stayed open to ensure continued production of parts so that essential vehicles can stay on the roads to support the nationwide response, we need to get all production lines rolling and delivering for the economy again. This means implementing a package of measures that supports the entire automotive industry, from retail through supply chains to vehicle manufacture. This should be seen as long-term investment into the underlying competitiveness of a sector critical to the health of the UK economy and the livelihoods of thousands of households right across the UK”.

Interact Analysis anticipates a recovery in 2021 for most major markets as the COVID-19 effect lessens and pent up demand is released. Global commercial vehicle production should exceed 2019 levels by 2022, with the US and China, accountable for 40% of global production, performing strongly as early as 2021. 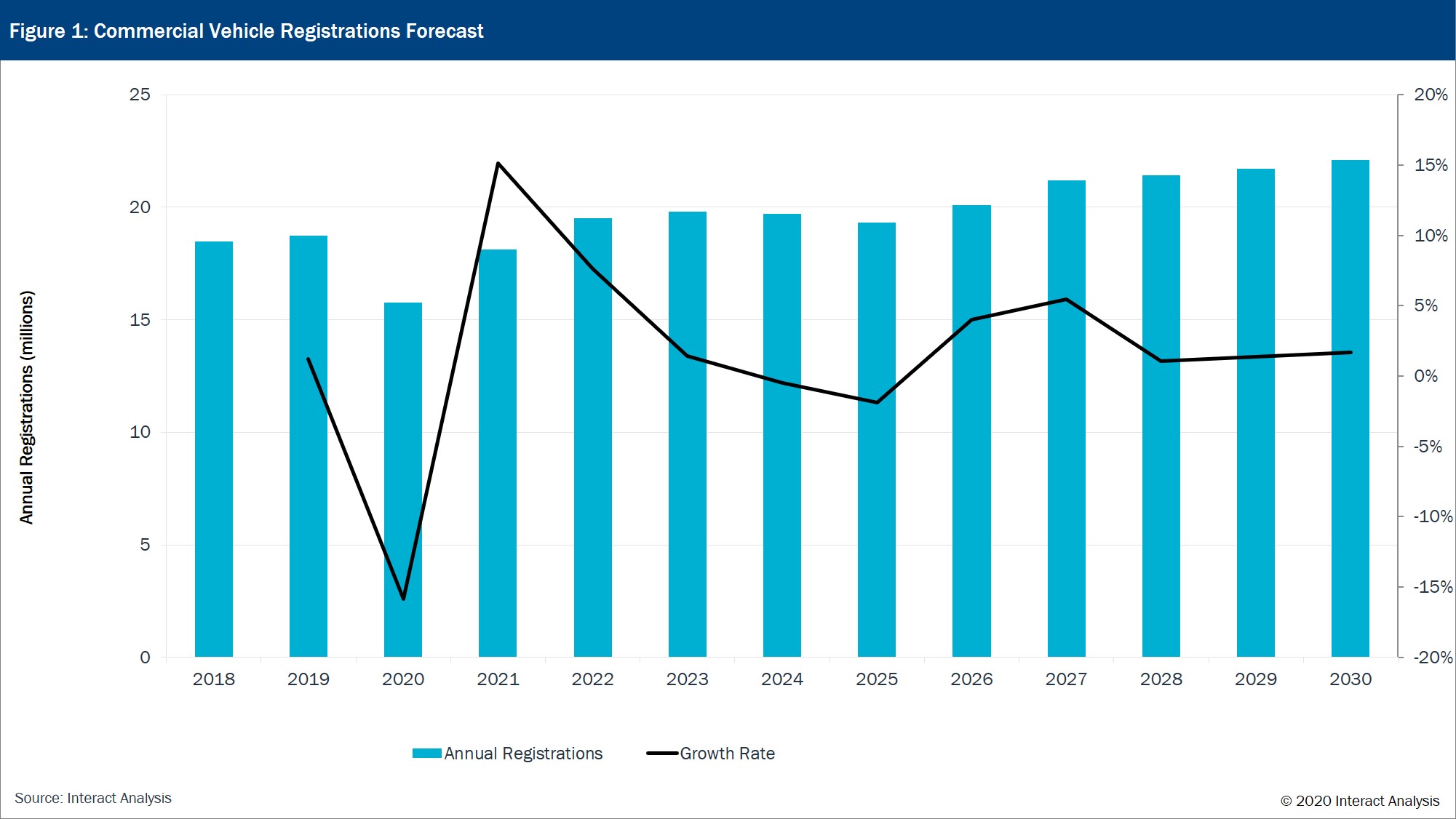 After the serious bump in the road in 2020, and the recovery by 2022, production is predicted to flatten off, but remain stable, up to 2030. The CAGR for the overall market from 2021, over the longer term, is forecast to be only 2%. Production of ICE vehicles in EMEA and APAC is predicted to peak in the next 5 years. In North America, the peak will come after 2030. The upfront cost advantage of ICE vehicles, and the lack of subsidies for electric vehicles will sustain the American ICE market.  However, globally, the electrified vehicle sector is predicted to be the major growth area, with growth rates exceeding 20% over the long-term.

Electrification: The Rise of the Hybrid

Interact Analysis forecasts that electrified powertrains – hybrid, fuel cell and battery electric – will account for over 2.5 million annual registrations by 2030. The overwhelming majority of these will be in China, the US, Germany, France and the UK. Battery electric powertrains are expected to be the predominant drive technology in utility and light duty vehicles. But even in heavier duty applications like city buses and urban distribution they will be the favored choice, particularly where there are zero emission zones. Inter-city bus fleets are expected to see an increasing use of hybrid technology, primarily because of the long range of these vehicles, where pure battery electric is simply not a viable option. Not yet, anyway. Fuel cell technology is likely to become more prevalent in the inter-city bus, city bus and long-haul sectors. There is already significant funding for city buses running on fuel cell technology in Europe and, from a range perspective, it is the best option for long-haul applications. 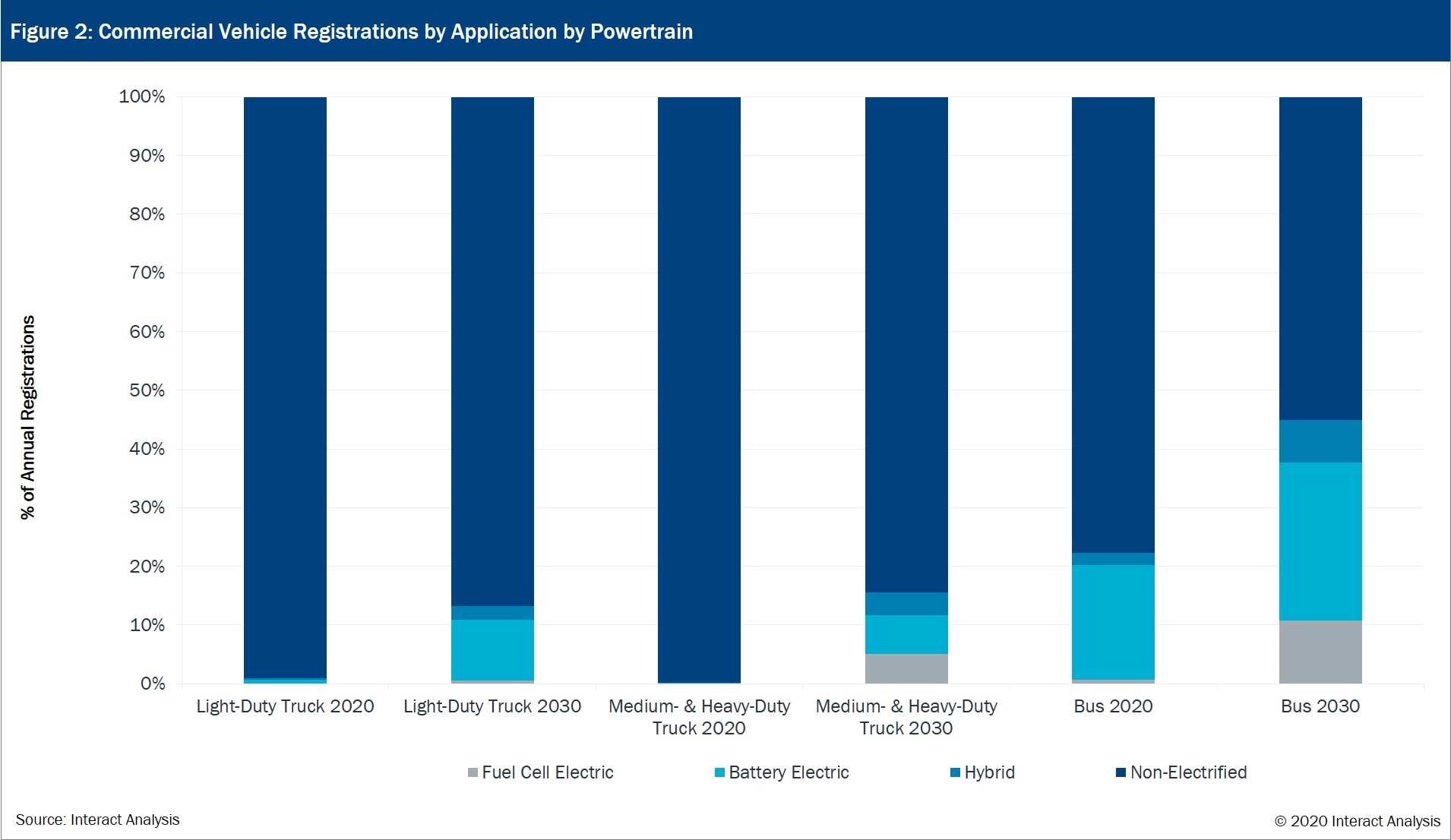 The latest policy developments in China, which suggest a major shift in position on hybridization of ‘traditional energy vehicles’ and a move away from subsidies to a focus on incentivization (‘user orientated encouragement policy’), signal that hybrid technologies will have a strong role in the region, This change in position will have a major impact on the global electrified vehicle landscape, in particular mild and full hybrids.

The Energy Saving and New Energy Vehicle Technology Roadmap (version 2) states that by 2030, New Energy Vehicles should account for 30% of new sales in China while hybrids should account for 75% of ‘traditional energy’ vehicles. The impact on the medium and heavy-duty commercial vehicle market could be significant. This policy, which signals an easing of its green rules in order to stimulate production, could create a boom in the hybrid vehicle market.

While some information regarding the new policy direction has been released, the exact nature and structure of the policy has yet to be announced. What is known, however, is that it will shift away from a purchase subsidy to what the government describes as a ‘user-orientated encouragement policy’.

Interact Analysis envisages two possible scenarios emerging through the revised policy. ‘Encouragement’ could include incentives, on a level playing field, for full electric and hybrid vehicles, such as lane priority and low emission zones similar to those used in Europe. The government could also extend the dual credit system, which incentivises OEMs to produce a certain number of New Energy Vehicles per year, for example, it could be extended to include ‘Energy Saving Vehicles’, providing an additional supply-side incentive. In this scenario, it is expected that there will be a massive displacement of zero emission vehicles by hybrid vehicles relative to what had been forecast prior to the updated roadmap. Interact Analysis had predicted that by 2030 1.5% of electrified medium and heavy-duty vehicles would run on hybrid powertrains. On the basis of the scenario described above, that figure has been revised up to 43%.

In the second scenario, ‘differential incentives’, it is assumed that the policy will be structured such that the subsidies will be proportional to the cost of the vehicle. For example, fuel cell vehicles, requiring the highest initial capital outlay, would receive the highest incentives whilst mild hybrids would receive the lowest amount. Within the differential incentives scenario, Interact Analysis predicts that vehicles with hybrid powertrains could occupy up to 28% of the electrified medium- and heavy-duty commercial vehicle market.

Crucially, these targets have been set such that the OEMs are able to choose what technologies to use in order to achieve the required targets. On one end of the spectrum, OEMs could implement mild hybridisation and emission reduction technologies across their entire fleets, resulting in a small reduction in CO2 emissions for all vehicles sold. Alternatively, OEMs could sell a handful of zero emission vehicles to off-set the emissions from ICE vehicles which do not meet the required CO2 reduction targets. In reality, OEMs will likely sit somewhere in the middle of this spectrum, offering zero emission vehicles in countries and applications where it makes sense, whilst using technologies like mild hybridisation where going battery electric isn’t economical throughout the time-frame of the policy.

Interact Analysis is forecasting a strong uptake in mild hybridisation in Europe, especially within heavy-duty distribution and long haul applications. Whilst mild hybrid technology offers some cost benefits from a TCO perspective (Daimler claims its Citaro hybrid is able to reduce fuel consumption by 8.5%) the major driver in Europe will be the OEMs pushing this technology onto customers as a means to reduce their overall fleet CO2 emissions.

North America, on the other hand, has a different policy framework which discourages OEMs from selling hybrid trucks. The Advanced Clean Trucks Rule, unanimously approved by the Californian Air Resource Board (CARB), requires that OEMs ensure that a certain percentage of trucks sold in California are zero emission with the percentage increasing over time. Since the bill was passed, several other states have followed suit. OEMs will therefore be disincentivised to sell hybrid vehicles as doing so will affect their zero emission vehicle sales.