–          UAV shipments surge by nearly 70 percent according to Interact Analysis

London (Sep, 26, 2017) — More than 150,000 commercial drones or UAVs (unmanned aerial vehicles) will be shipped in 2017 according to a new report from Interact Analysis. The detailed research report found that commercial drone shipments are growing by 68 percent this year. Media and entertainment applications still hold the lion’s share and will consume 85 percent of this shipments; however, other industries including construction, building inspection and public safety are growing much quicker.

95 percent of all shipments will be multi-rotor

Unsurprisingly, the report – which was produced based on six months of primary research -revealed that rotary/multi-rotor drones will account for 95 percent of all commercial drone shipments this year. “Multi-rotor drones are clearly the preferred platform of many vendors, including leader DJI, and the preferred platform for the media and entertainment sector” said Ash Sharma, Research Director at Interact Analysis. However, the relatively low price of rotary UAVs compared to other types means that they will ‘only’ account for 77 percent of revenues this year, down from 80 percent last year. Conversely, although fewer than 1,000 unmanned helicopters will only be shipped this year (0.5 percent of the total), they will generate 9 percent of the industry’s revenue. 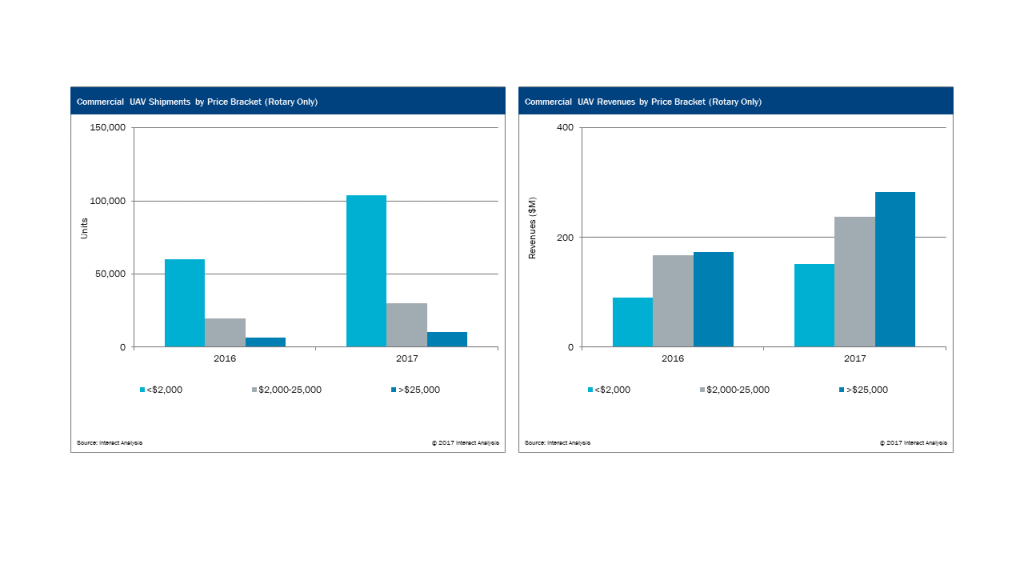 The report also found a similar picture when analysing shipments by price bracket. More than 100,000 rotary drones priced below $2,000 will be shipped this year. “These low-cost drones are the preferred choice for many in the media and entertainment sector, with roughly three-quarters of customers selecting drones in this price range, but not necessarily in more professional or industrial applications like oil and gas.” said Sharma. Just 10 percent of drones shipped to the oil and gas sector this year will be priced below $2,000, the report found.

Despite large shipments of <$2,000 rotary drones, the report showed that these types of products will be the smallest contributor to industry revenues this year and worth just over $150 million. Drones priced at $2,000-$25,000 and over $25,000 on the other hand will account for 78 percent of revenues, despite making up just 28 percent of shipments.

Higher levels of drone automation will continue in 2017, with just 14 percent of drones shipped this year relying on full human control and no flight assistance. Some form of auto-pilot or obstacle avoidance has become increasingly common and roughly three-quarters of all commercial drones sold this year will have this feature, the report found. “Fully autonomous drones – ones which truly can operate without any human intervention are still relatively rare however. Whilst these are tipped for rapid growth, they will remain a niche for this industry, at least in the next five years” commented Sharma.