London, UK (Jan 9, 2019) – Following a strong 1H, revenue growth from automated guided vehicles (AGVs) and autonomous mobile robots (AMRs) accelerated in Q3 2018, with the industry expanding by more than 30% compared to the same quarter a year before. All major regions (Americas, APAC, EMEA) experienced growth in the quarter, but the Americas was highest overall.

The strong quarter took growth for the first nine months of 2018 to close to 25%, allowing revenues to breach the $1 billion mark. Early indicators show that Q4 was also an incredibly strong quarter, continuing the industry’s remarkable growth trajectory. 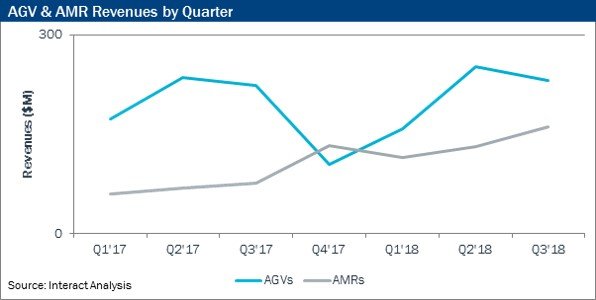 Revenue growth for AGVs slipped back to low single-digits in Q3 as demand for the first nine months of the year was relatively sluggish with industry revenues marginally up on 2017. The APAC region grew strongly but was pared back by declines in both the Americas and EMEA.

AMR demand was a totally different picture in Q3. Revenues more than doubled compared to the same quarter of 2017 and accelerated compared to Q2.  All major regions performed very strongly, illustrating the consistent and growing acceptance of autonomous robots for material handling. Unit shipments grew at almost an identical pace suggesting little change to AMR pricing in 2018, commonplace in early-stage, but growing industries.

Consequently, growth of mobile robot revenues in the first three quarters of 2018 was almost entirely down to demand for AMRs rather than AGVs. 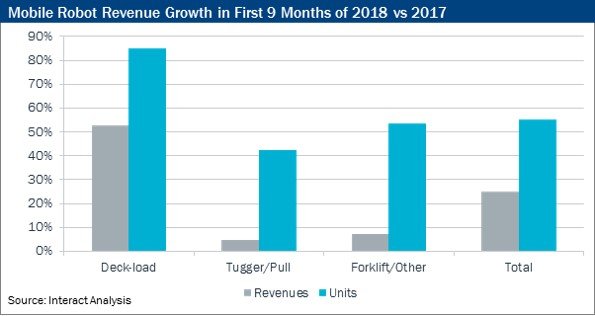 Revenues from deck-load robots grew rapidly by more than 80% in Q3 2018 year-over-year but slipped back a little versus Q2.  This is not surprising given the relatively small size of the nascent AMR market, where new deployments can make large demand swings between quarters.  Demand for tugger robots, which are heavily dependant on automotive customers remained volatile in Q3, with revenues dipping by 10% compared to 2017.  Forklift robot revenues grew very strongly in Q3 2018 with the market nearly doubling compared to Q2 and close to a 10% increase over the same period in 2017.

For the first nine months of the year, all mobile robot types have grown strongly, though revenue growth for deck-load products remained notably higher.