As the COVID-19 pandemic continues to hit economies across the world, the focus on automation in eCommerce is becoming sharper. In times like these, with online shopping becoming the norm rather than the exception, distribution centres cannot rely on human manpower alone to satisfy demand. Warehouse automation technology has come of age. It brings efficiency and speed to the distribution chain, from the moment an order is placed, to the point when the product is sent out for delivery. In this insight, we take a look at a relatively new aspect of warehouse automation, but one which has the potential to open up lucrative markets for automation vendors – Fulfillment–as–a–Service (FaaS). Whilst 3PLs have offered FaaS for many years, this insight focuses on how automation vendors are tapping into this new market.

Historically, the business model employed by most warehouse automation vendors has been to sell the automation equipment and associated control software on a CapEx basis and generate recurring revenues through maintenance contracts. In some cases, the automation vendor will also sell or license WES and WMS software packages used to manage the operations within the four-walls. In recent years, however, some automation vendors are providing additional fulfillment services such as route planning, assortment management, front-end user interface and in some cases even last mile delivery. Our analysis has identified a spectrum of Fulfillment-as-a-Service offerings from automation vendors which can broadly be grouped into three major buckets: 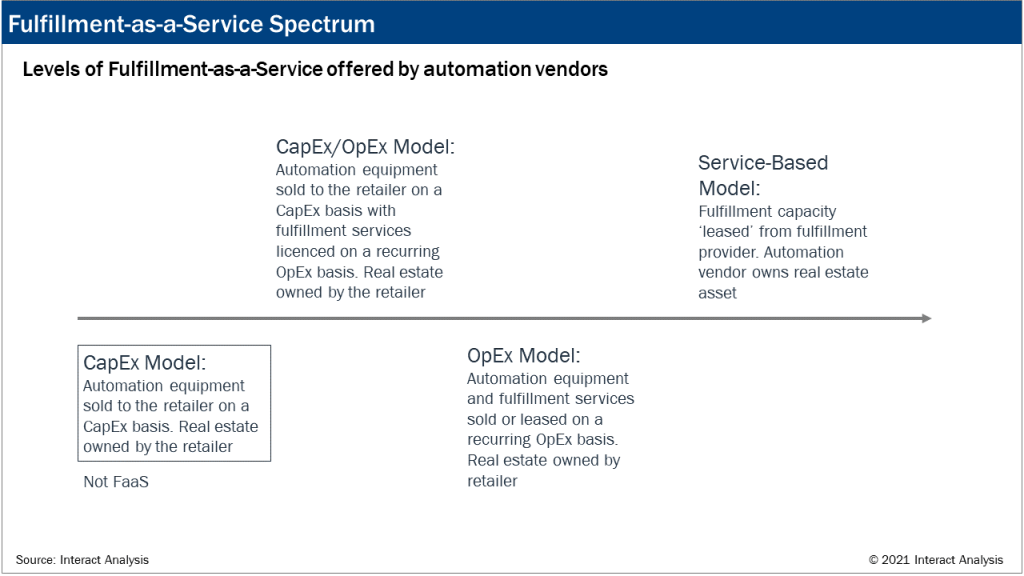 The micro-fulfillment sector is growing at a particularly fast rate, making it fertile ground for companies trying to find growth in FaaS. And, while traditional automation vendors are going down the route of selling just the automation equipment on a CapEx basis, many of the new entrants are offering FaaS models to varying degrees. 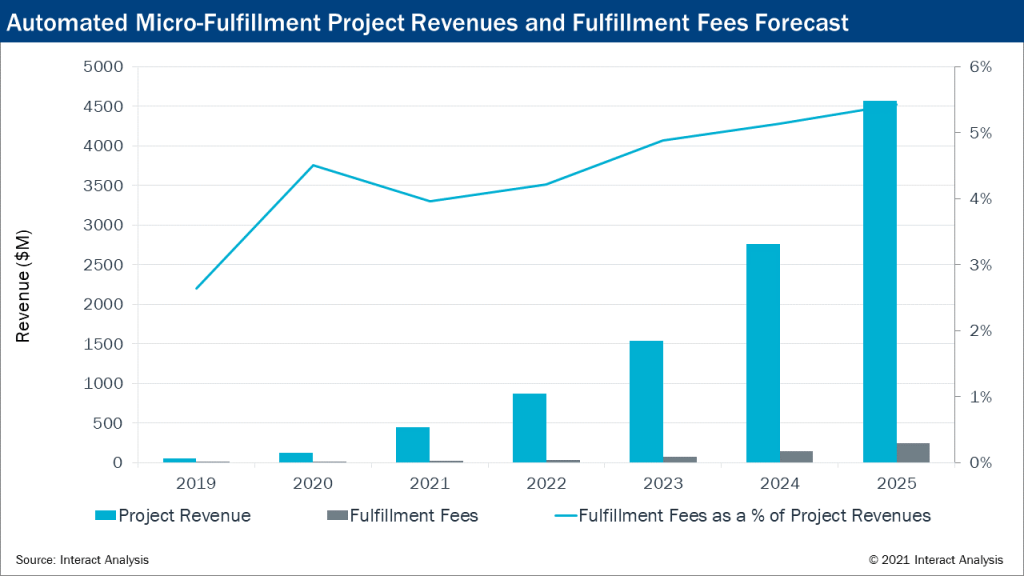 Online retail is a relatively new phenomenon for many companies in the groceries sector, particularly in the US, and as a consequence many grocers have looked to outfits like Takeoff Technologies and Ocado to provide a full-package fulfillment service on their premises. This is why companies like Takeoff are doing so well. There are, however, grocers which have a long history in online retail, such as Walmart and Tesco, who have developed their own solutions. Tesco, for example, uses an off-the-shelf ‘plug-and-play’ solution from an established automation vendor whilst relying on its own in-house software to manage the fulfillment process.

To fill the gaps in a fast growing market, helping to create a seamless order-to-delivery service, we are seeing increasing instances of collaboration in the value chain. One example is Attabotics. Their website header encourages companies to ‘Reinvent your supply-chain’, offering ‘3D robotic goods to person storage, retrieval and real-time order-fulfillment’. Attabotics is an automation hardware and control software vendor, and the company recently joined up with Food-X to provide an end-to-end grocery fulfilment service.  Food-X recently signed a deal with Carrefour in Belgium and it’s possible that this deal will include the Attabotics storage system. The deal includes several centralized fulfillment centres along with Food-X’s Software as a Service options that include AI-based order planning and picking algorithms and last mile routing optimization. It’s likely that we’ll see a growing number of partnerships between automation vendors and fulfillment service providers in the near future.

Another example is Takeoff Technologies’ collaboration with Knapp. Knapp is a traditional automation vendor that sells automation equipment to customers on a CapEx basis. But in their collaboration arrangement, the two companies partner up. The customer buys automation kit in from Knapp and at the same time signs up to an ongoing FaaS contract with Takeoff to manage the system.

Fulfillment as a Service: The integrated package that eases the way

MFC vendor Fabric’s slogan – ‘Get closer to grow bigger’ – encapsulates the aims of fulfilment as a service. Online retail is booming. Customer expectations are high in terms of quality of product and speed of delivery. It’s difficult for retailers to satisfy the demand if they don’t have the premises or the equipment to ensure customer satisfaction. One answer is the solution that companies like Fabric are starting to provide. They are beginning to offer retailers the opportunity to get close to the customer by renting space in their inner-city automated micro-fulfillment centres.

The Fabric model of FaaS can potentially offer the full package to retailers – the end-to-end management of the fulfilment process, on an OpEx basis with no large upfront costs: retail space, often shared with a number of competing retailers, automated equipment, management and execution software. Interact Analysis expects general merchandise and apparel retailers to be the main users of this ‘pure’ FaaS offering, as they typically have a smaller retail estate footprint to leverage for in-house MFCs.

The cloud computing of eCommerce?

Our view is that no one FaaS model on the spectrum will win out. Different retailers will opt for different variants of FaaS depending on their needs. Smaller retailers with limited cash resources and limited experience at eCommerce may opt for a full FaaS model whereby the automation vendor owns the real estate asset. Conversely, cash–rich tech–savvy retailers will likely bring much of the fulfillment in-house to avoid unnecessary overheads. That said, even the largest and most advanced retailers will always likely benefit from outsourcing additional fulfillment capacity during peak-seasons.

In the long run, micro-FaaS may be a lifeline for many smaller retailers looking to rapidly make serious improvements to their eCommerce offerings without having to make massive upfront investments. The FaaS model can offer scalable access to highly advanced eCommerce micro-fulfillment capabilities overnight.

In general, automation vendors weren’t originally built to offer FaaS, and it will be difficult for them to switch. One big downside will be an initial fall in revenues as they move from installing their kit on a CapEx basis to installing it on an OpEx basis. However, as shown by the example of Fabric, many automation vendors may well still attempt to do so, and may find it a very attractive model for future revenue growth: in part simply because many 3PLs choose not to automate their own warehouses due to the insecurity of the contracts they have from their own customers. For automation vendors entering the FaaS market, micro–fulfillment is an excellent testbed because it is an area that the main 3PLs are currently not really involved in at all.

To continue the conversation with our Senior Analyst Rueben Scriven, get in touch today: rueben.scriven@interactanalysis.com