Up until now, we’ve resisted writing on the topic of Brexit, largely because the media is flooded with commentary about it. However, with numerous customers asking about the impact we anticipate Brexit will have on the manufacturing economy in general, and in particular the UK, we have decided to talk about it here.

A Brief History of UK Manufacturing

With the rise of China as the dominant manufacturing economy, there is a tendency to assume that many of the other more established economies are suffering as a result. This is certainly true for the UK, where the manufacturing sector often seems to be perceived through a lens of pessimism. 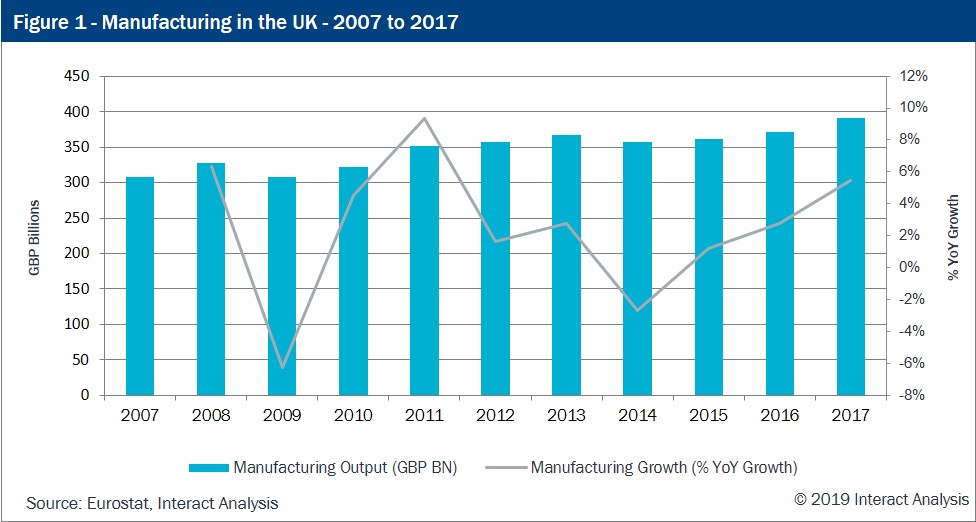 Figure 1 shows total manufacturing output, over this period, representing the aggregate total value of all goods sold by manufacturing companies during the year. What is interesting to note is that following the Brexit vote of June 2016, manufacturing output grew at above average growth rates, and 2017 saw the strongest growth since 2011. Undoubtedly the weakness of sterling has helped, driving an increase in exports.

During the same period the UK economy performed well – unsurprisingly there is a close correlation between GDP and manufacturing. Nominal GDP growth was 3.9% and 3.6% in 2016 and 2017 respectively, healthily above the 10-year average of 2.9%. It is worth noting, and we’ve discussed this issue before (here), if one converts into USD (to compare against other regions, say), using floating exchange rates, manufacturing output in the UK would have contracted by 8.9% in 2016 and would show as being flat in 2017! This might be partly the source of perceived negativity towards the UK manufacturing economy. Sterling dropped sharply versus the dollar post-Brexit, so when recalculating in dollar terms, the currency depreciation overturns the small amount of underlying growth, arriving at a negative number. Exchange rates will always have a considerable effect if you’re trying to compare different countries on a common currency; we prefer to consider the market in local or fixed currency terms to avoid muddying the water.

The Risks Posed by Brexit

From a manufacturing perspective, there are two main risks that Brexit brings to bear: how much will it hurt the UK manufacturing economy, and to what extent will the export of UK manufactured goods be affected? Let’s address the second item first. The concern here is that post-Brexit, the UK’s ability to sell goods to the EU, its largest trading partner, could be compromised depending on the Brexit scenario enacted. To understand the extent of this impact, let’s review the make-up of the leading sectors that make up the UK manufacturing sector and the extent to which year are exported. 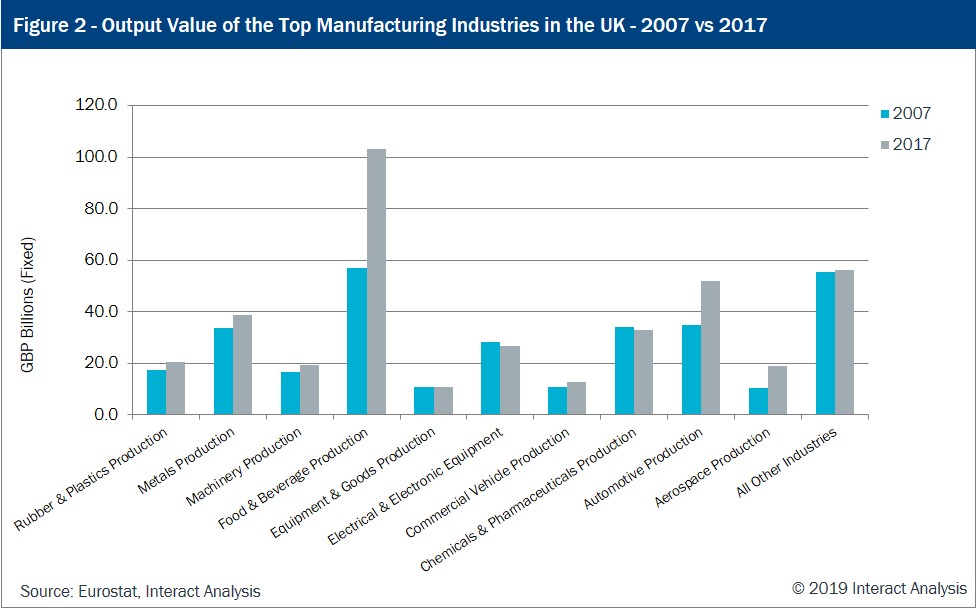 The mix of UK industries is interesting, but not exceptional. More developed manufacturing economies tend to have strength in more technically intense sectors such as aerospace, automotive, chemicals, electrical & electronic equipment, and high-end machinery, and less strength in commoditized industries such as textiles, aggregates, and general-purpose equipment & goods. It is these high-end sectors that represent the larger export markets. For the UK, over half of all aerospace, automotive, chemicals & pharmaceuticals, machinery and electrical & electronic equipment are exported making these sectors most at risk in a post-Brexit scenario. Collectively they account for a little over one-third of UK manufacturing output.

Food & beverage production is the single largest sector, accounting for over a quarter of all manufacturing production in 2017. In addition, it is rapidly growing, with a CAGR of over 6% since 2007; only the aerospace production sector is growing faster in growth terms, but in terms of actual added production value the food & beverage sector’s expansion between 2007 and 2017 is by far the largest, as shown in Figure 2. Growth in food production is a global mega-trend fueled by continued population growth, and there is nothing to suggest this growth trajectory will slow.

The strength of the food & beverage industry is of note when considering Brexit impact, since these products are largely consumed indigenously, with less than 10% of UK production exported. In fact, most UK industries have a limited export exposure, relying on less than 20% of revenues from overseas demand. My back-of-the-envelope calculation suggests that less than one-third of all UK manufacturing was sold overseas in 2017. This is important, since post Brexit, and regardless of what happens with EU export markets, demand for two-thirds of the UK manufacturing economy is domestically driven. Also, bear in mind that not all the one-third of products exported end up in the EU, which further reduces the extent of manufacturing exposure to Brexit.

So, circling back to the original question – to what extent exports will be hindered by Brexit – let’s review what we know.

While a one-fifth exposure is significant, we are largely of the view that Brexit will be executed either in a “soft” scenario with a managed deal that minimizes the short-term impact to the UK economy, or not at all (which is looking more likely at the time of writing this insight). While a hard Brexit is still a possibility, it appears an increasingly unlikely one. A hard Brexit would bring about the most disruption to the UK’s manufacturing economy, but this limited degree of export exposure to the EU coupled with factors such as increased domestic demand for locally produced goods and the weakness of sterling making exports to other regions attractive, would mitigate the short to medium-term impact. Undoubtedly, a hard Brexit would pull down manufacturing output during the year it is executed (whenever that might be), possibly as much as 10%, but a sharp recovery would be likely as the UK manufacturing economy has proven itself to be robust and resilient, and highly competitive versus other major manufacturing regions. As international trade deals are established (which could be challenging and time consuming) and red-tape reduced, opportunities for growth could quickly manifest.

Our Forecast for Manufacturing Output

As previously stated, our forecast assumes a soft-Brexit or remain scenario, both of which would minimize the impact to export demand but would likely hinder the broader economic situation for the UK. Figure 3 outlines our projections through to 2023. 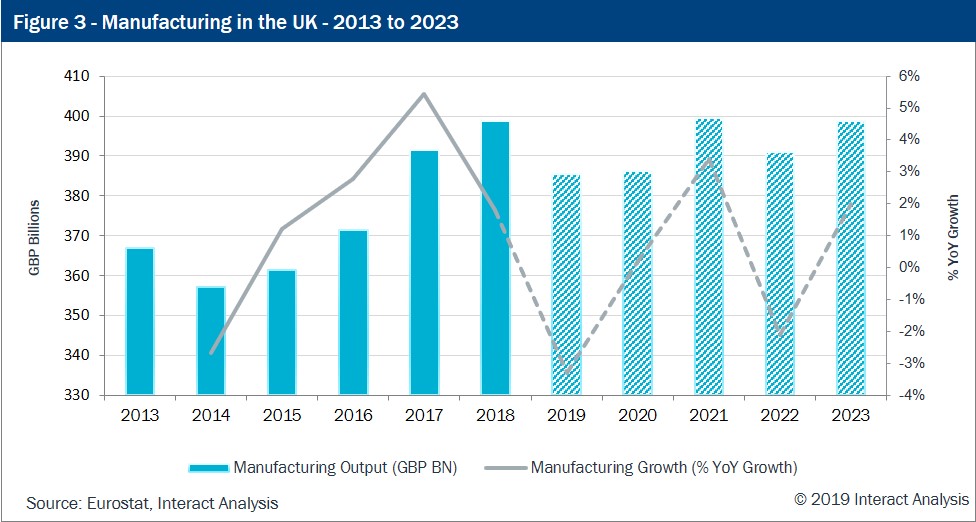 In constructing this forecast, several key points were considered:

Our current forecast for 2019 is that the UK manufacturing economy will contract by 3.3%, which would be the lowest growth recorded since 2009 (-6.2%). We partner with ITR Economics, which helps inform our economic forecasts, and it is their view that 2019 will not see a severe global economic downturn. Instead, the general expectation is that 2019 will be a temporary slowdown among certain manufacturing economies (Germany and China of note, but not so much in the US), and that 2020-2021 will be periods of growth. ITR currently believes the next major economic downturn is most likely to manifest in 2022-2023, which explains why our forecast for 2022 is negative (-2.2%) also.

The fact that the 2019 contraction is so severe reflects our view that the uncertainty surrounding Brexit (rather than Brexit itself) will significantly harm manufacturing output in the UK this year.

1 Note: our definition of “manufacturing” does not include the value of output from mining, utilities and petrochemical production.

Adrian Lloyd is the CEO and Research Director for Interact Analysis. He leads a team preparing the most in-depth analysis of the manufacturing economy available. The data is available through our Manufacturing Industry Output Tracker.

If you’d like to learn more about this report or have any questions, please contact us at info@interactanalysis.com