I recently moderated a panel at the Motor & Drive Systems 2019 Conference in Orlando, FL, where we explored this topic. We had great representation from all aspects of the supply chain, with panel members from STMicroelectronics (power semiconductors and the impact on drive systems), Software Motor Company (high-efficient switched reluctance motors as an alternative to existing motor technologies), and Emerson (HVACR OEM, with a focus on the refrigeration component). The session was very well received and garnered much interesting insight that I wanted to share here.

Unsurprisingly, the main thrust from the motor and drive side is towards continued improvements on system energy efficiency. Luca Difalco (Marketing VP, STMicroelectronics) highlighted the urgent need for more efficient HVACR systems in the North America market in general. Compared with other countries, which are motivated by different energy market economics, the region is significantly lagging in adoption of energy-saving motor and drive technologies. Systems still regularly use inefficient induction motors, often without a drive, largely due to the multi-layered distribution channel which lacks motivation or expertise to implement such technologies. A climate of regulation helps continue to pave the way for better adoption, but even these efforts are mitigated by challenges in the field. Paul Wickberg (EVP – Software Motor Company) remarked that it is not unusual to find installed equipment with an inverter drive in place in bypass mode as many HVACR contractors lack the expertise to correctly fix inverter drive specific problems, so the simplest solution is to disengage them. So, solving the energy problem is more than offering a better drive or a better motor.

Working towards an integrated solution

Joe Summers (PM for Power Electronics & Integrated Solutions, Emerson – Global Cold Chain) emphasized this point succinctly: what is required is an integrated solution combining the motor and control functionality delivered as part of the compressor (for example). Currently, drive solutions tend to sit in a panel remote from the motor-driven equipment, which makes them optional. Contractors could choose to install or not, and with equipment contracts being highly competitive; a race to the bottom can inevitably see inverter drives being crossed off the spec sheets. What Joe would like to see is something resembling the decentralized drive architectures being increasingly adopted in applications such as material handling, packaging and logistics. As always, the barrier here is cost – how can we arrive at an integrated solution that is at a comparable price point to a modular architecture? Also, further challenges are faced – notably building a drive unit that is small enough to fit around a traditional compressor housing, which can stand up to the high temperatures likely to be encountered during system operation.

The topic of wide-bandgap (WBG) semiconductors is not new. Their promise is to offer superior operational efficiency as well as an ability to operate at higher junction temperatures enabling end-equipment to be shrunk in size. Luca Difalco indicated that WBG devices offer much greater efficiencies compared to silicon. And with current devices breaking down around 150ºC, WBG’s capability to withstand temperatures in excess of 200ºC means they can be housed in smaller packages and located in hotter environments.

While commercially available products have been around for a while – first introduced into the market around 2010 – they have been slow to achieve market adoption due to prohibitive cost compared to competing silicon-based solutions, notably MOSFETs and IGBTs. The challenge in reducing device cost is a combination of very expensive raw material (SiC substrates, for example, is sourced by a small number of suppliers) and the fabrication processes being used to produce existing devices not being compatible with the production of WBG devices, meaning that substantial investment is needed to either upgrade existing semiconductor lines, or to build new fabrication facilities which float in the multi-billion dollar range.

Undoubtedly, when considering the design challenges and needs outlined by Joe Summers to see wider drive adoption, WBG technology appears to provide a compelling opportunity. By being able to shrink the size of a drive and sitting it inside the compressor housing solution, the goal to develop an integrated solution appears attainable.

So far, the main barriers to adoption have been cost and availability. However, Luca pointed out that there has been a huge reduction in the cost of WBG devices over the last two years, largely driven by the adoption of SiC technology in the automotive market for electric vehicles, which has enabled scale, thus driving supply chain optimization and yield improvements. To build electric vehicles at a price point appealing to the mass market, it makes sense to adopt the highest efficiency switching devices available to improve system efficiency, thereby reducing cost by requiring less batteries to achieve similar performance levels. For example, it is widely reported in the public domain that Tesla’s Model 3 car is the first such vehicle to adopt silicon carbide devices (a type of WBG semiconductor), manufactured by STMicroelectronics.

The scale reached thanks to automotive adoption has allowed for the cost learning curve to be pulled in by a few years, making SiC technology affordable in a wider array of application areas, including but not limited to HCAVR. The opportunity presented by this is startling, when one considers the main growth drives in power semiconductor switching applications are renewable energy and energy storage and motor control – all applications with considerable “legs”. WBG is the future of the power semiconductor industry, and the message to design engineers is prepare for the adoption of this technology.

The excitement around this topic must be placed in perspective. As one audience member pointed out, designing using WBG technology requires different packaging around the device to achieve maximum benefits and much work must be done to address this. Additionally, adopting WBG devices is not a plug and play model; equipment will require a fundamental redesign to benefit from the reduced sizes achievable by its adoption. And, for now, there are reported supply chain constraints with device demand surpassing availability. Nonetheless, step changes in semiconductor technologies have occurred before, notably the shift from bipolar technology to MOS technologies, so broad scale uptake is only a matter of time.

Switched reluctance motors – an old, and new, kid on the block

While I enjoyed the discussion and hype surrounding WBG technology, there was another potentially disruptive technology discussed during our session that I was equally excited to hear about – this time as it relates to motor development. Paul Wickberg was able to introduce to our audience some very interesting insight around a variation of the switched reluctance motor that his company, Software Motor Company (SMC), has been producing. SMC is a fairly new motor manufacturer that has invested substantial effort in building a switched reluctance motor that offers significant performance and cost benefits versus equivalent AC induction and high efficiency AC permanent magnet motors in excess of 1kW. His company is predominantly targeting the HVACR sector, but there is a broader promise for the technology.

Switched reluctance (SR) motor designs have been around for in excess of 100 years. The architecture is unusual in that windings are excited in the stator as opposed to the rotor, which makes them mechanically simpler devices, but much more difficult to control from a drive perspective. In fact, SR motors fundamentally need a drive to energize, unlike an AC induction motor which will start up if connected directly to an AC supply. Another important point regarding this motor is that they do not contain rare earth magnets. This is relevant as a neighboring presenter pointed out at the Magnetics Conference (which was running alongside the Motor & Drive Systems conference), there are significant shortages of certain types of rare earth materials that are used in permanent magnet-based motors. There has been a general desire in recent years to reduce exposure to these rare earth components when it comes to motor design. For example, Joe Summers commented that over the last 12 months he’d seen permanent magnet motors increase by 10% off the back of magnet price inflation. With the most efficient integral motors available today being permanent magnet in nature, we see this push-pull market dynamic between efficiency and cost playing out again, and typically efficiency loses out where not legislated.

I wrote on the topic of SR motors nearly 10 years ago, and at the time it was being discussed as a future disruptive motor technology, due to their low cost, and robust characteristics making them reliable. SMC appears to be realizing this opportunity; it has built a SR motor with an unusually high pole count, which has helped improve efficiency and controllability of the motor. The net effect is a highly efficient motor (SMC claims 40%+ system improvement, with efficiencies of 90%+) and a torque profile that provides 80%+ torque across all speeds. Paul indicated when switching out like for like motor combinations, the system pays for itself in short time periods from one to three years. And with the added benefit of the drive being required to make the motor turn, field engineers won’t be able to engage the bypass switch!

We asked Joe Summers to comment on the technology, and he was impressed. He mentioned that Emerson had explored SR motors as an option in the past and the available devices or technology at the time didn’t have the correct torque characteristics to make them viable. But based on what Paul presented, Joe commented the technology looked compelling and was interesting in taking a more detailed look. 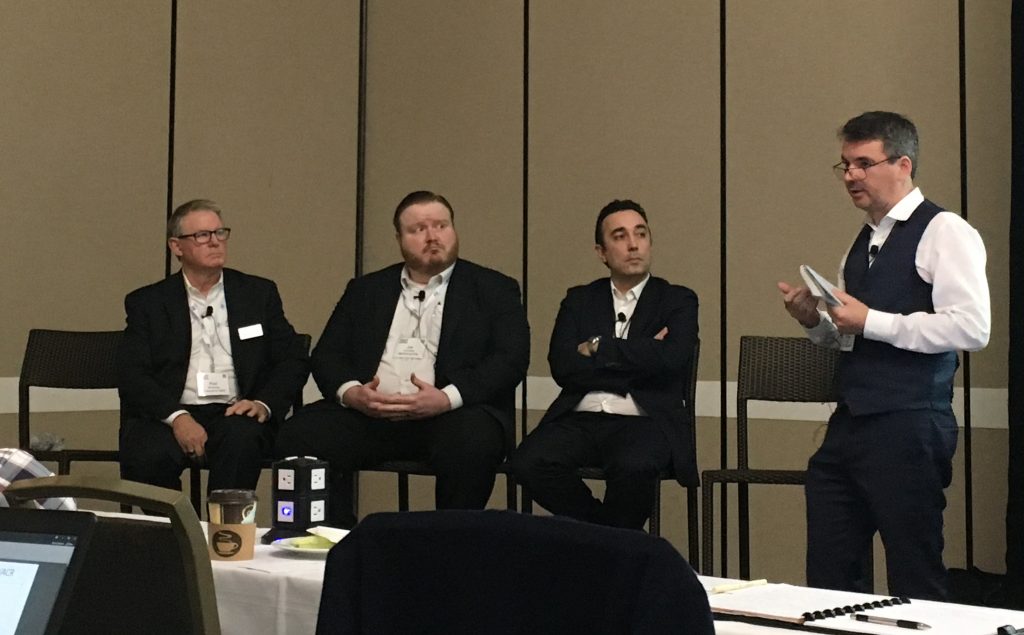 About the author: Adrian Lloyd is CEO & Research Director of Interact Analysis. He was previously a partner of IMS Research and has been pioneering market intelligence and analysis in the motors, drives and semiconductor fields for in excess of 20 years.

The Future of Warehouse Automation- 2020