The Rise of Ocado: An In-depth Assessment of the Grocery Warehouse Automation Market

COVID-19 is causing a seismic shift in the grocery sector. The strict government-imposed lockdowns are forcing many consumers to shop for their groceries online, many of which are doing so for the first time. Like any large shifts in consumer behaviour, there are winners and there are losers and Ocado appears to be sitting comfortably in the winner’s camp, if its surging stock price is anything to go by.

In recent years, Ocado has pivoted away from being an online grocery retailer to a provider of e-commerce and fulfilment technology for other grocery retailers. Ocado describes itself as a ‘technology-led, global, software and robotics platform business, with a strong retail heritage’.

While Ocado’s value proposition extends beyond warehouse automation, its customers may choose to run their e-commerce fulfilment operations in-house, in which case, they would likely invest in a warehouse automation solution supplied by a system integrator. This insight provides an analysis of the grocery warehouse automation market in the context of Ocado and discusses the likely impact of COVID-19 and what this means for the growth potential of the company. 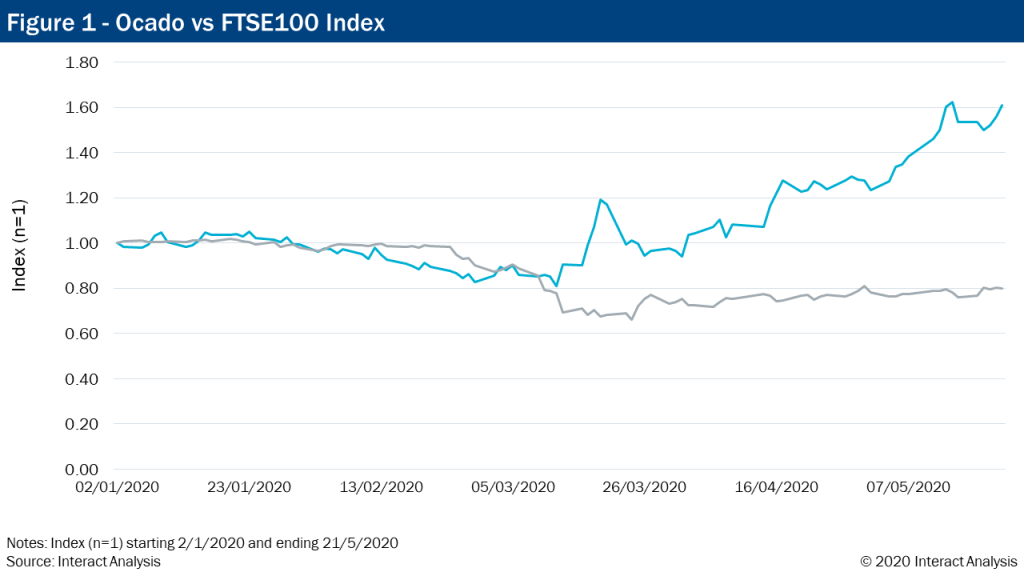 In 2019, approximately 33% of Ocado’s revenue came from its solutions business and this is expected to increase due to the number of new partnerships it’s formed both domestically and internationally.

In 2019, Ocado formed a 50:50 joint venture with M&S to provide an online grocery platform for the UK market. In addition, Ocado has increased its international partnerships which now includes seven grocery retailers such as Kroger’s in the US and Coles in Australia. Ocado is also trialling its Ocado Zoom service in London which will serve customers with rapid online deliveries using what it calls mini-sized Centralised Fulfilment Centers (Mini-CFCs).

Ocado’s vision is to create a vertically integrated, end-to-end online grocery technology platform from click to collect (and/or delivery). However, until recently, Ocado relied on third-party system integrators to provide the warehouse automation equipment used in its distribution and fulfilment centers. This includes the AutoStore solution which many critics of Ocado claim it has copied unlawfully. By bringing the technology in-house, Ocado is becoming a feared competitor for many of the leading warehouse automation providers.

One of Witron’s sweet spots is distribution centers which replenish stores with mixed pallets. As such, its solutions are tailored towards case-level processing with limited capacity for item-level processing. Ocado’s solution, on the other hand, focuses on customer fulfilment and therefore handles goods at the item level.

In the short-term, we don’t expect Witron to be a significant direct competitor to Ocado. In fact, we’ve seen food retailers invest in technology from both Witron and Ocado at the same time to automate different parts of their supply chain. Coles, an Australian food retailer, is investing more than US$650 million in two large automated distribution centers which will be built by Witron. In addition, Coles is also partnering with Ocado which will handle Coles online orders and fulfilment operations.

The Impact of COVID-19 on the market

Many food retailers are struggling to cope with the surge in online orders because of COVID-19, especially those which use in-store order fulfilment methods. As a result, many retailers may be looking to advance the automation plans of their fulfilment operations. Based on interviews and surveys with warehouse automation vendors, there has been an increase in grocery warehouse automation project tenders over the past two months as a result of COVID-19.

One of the biggest fears for retailers is that there will be another spike in cases of COVID-19 once the lockdown restrictions have been lifted. In order to mitigate and prepare for such a scenario, we expect food retailers will look to invest in plug-and-play solutions with limited infrastructure requirements in order to rapidly install the solution.

In the long-term, however, we expect to see a significant increase in the number of large grocery warehouse automation projects focusing on e-commerce fulfilment; both micro- and centralised-fulfilment (see next section for further discussions on micro-fulfilment).

While we anticipate order intake for grocery warehouse automation projects to increase in 2020, we expect system integrator revenues to take a hit. This is primarily because some project completions will likely be pushed into 2021. Our analysis suggests that warehouse automation revenues for grocery projects in 2020 will decrease by 20 – 30% relative to our initial forecasts prior to COVID-19. 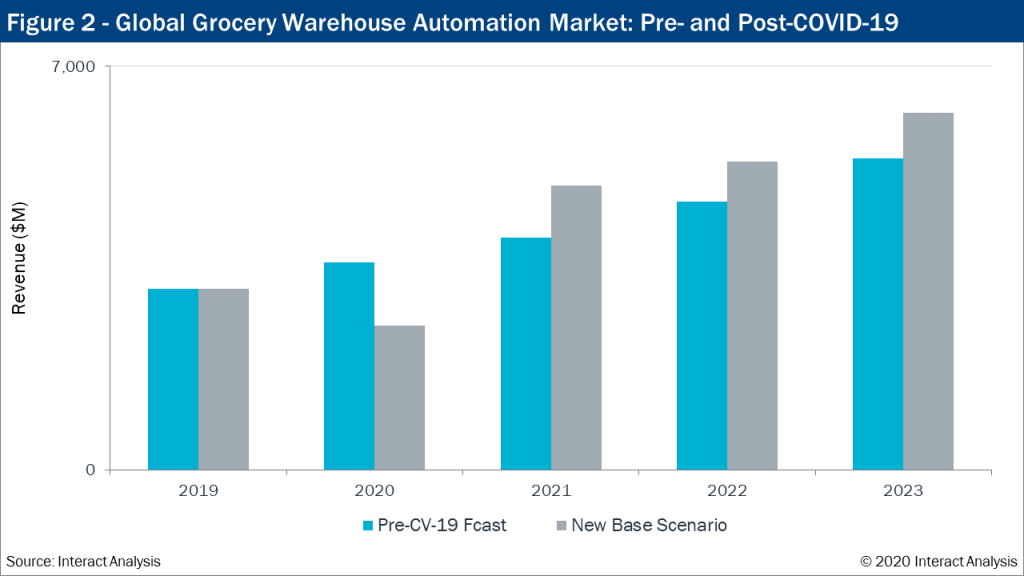 How Will Ocado Adapt in the Changing Grocery Landscape?

What many investors didn’t realise, however, is that the two strategies complement each other. As any supply chain manager will tell you, the optimal fulfilment method depends on several factors including the demographic, the favoured delivery model and the geography. It’s not a ‘one size fits all’ scenario.

That said, it would be a missed opportunity for Ocado to ignore micro-fulfilment as a potential solution type. According to its website, Ocado now offers a combination of micro- and centralised fulfilment centers, expanding its opportunity market and greatly improving its competitiveness in the US which will likely favour micro-fulfilment due to its larger land-mass.

According to its annual report, Ocado is also looking to enter the general merchandise market. This would position the Ocado Smart Platform (OSP), which includes Ocado’s fulfilment assets, end-to-end software, mobile apps and many more additional services, in competition with the likes of Shopify and Amazon’s fulfilment services.

In order to avoid direct competition with Amazon and Shopify, Ocado would have to partner with large, incumbent retailers, as opposed to SMEs. However, unlike the grocery market, many general merchandise retailers have already invested significantly in their e-commerce strategies and online platforms.

Ocado may decide to focus on its proprietary fulfilment centers in the general merchandise market instead of being an end-to-end service provider.

One potential headwind for Ocado is the disruptions in its fulfilment operations caused by the overwhelming demand for online grocery orders. According to a UK survey published by Internet Retailing, 57.3% of the 1,000 respondents claimed to have experienced disruptions in their online grocery shopping due to the services being overwhelmed. Furthermore, Ocado had to temporarily shut down its website after struggling with the level of online traffic in early March. It’s possible that consumers trialling online grocery shopping for the first time could be put off from doing so in future if their first-time experience was sub-par.

Despite this, however, there’s a clear growth trajectory for online grocery sales and Ocado is well positioned to take advantage of this. Ocado is diversifying its product portfolio by offering grocery micro-fulfilment solutions and as well as potentially offering general merchandise fulfilment solutions; both of which will greatly expand its opportunity market and increase its competitiveness.