The State of Australia’s Manufacturing Industry: A MIO Case Study

In this insight, we offer readers an example of the depth of the industrial data Interact Analysis can provide, and some of the conclusions that can be drawn from this data, using one country – Australia – as an example. The data is drawn from our quarterly updated Manufacturing Industry Outlook (MIO) Tracker, which quantifies the total value of manufacturing production for over 35 industries and machinery sectors, across 38 countries. It is reactive to the unforeseen, such as the recent pandemic and it is an invaluable tool for those wishing to build success in a complex industrial world.

Although Australia is sometimes considered a backwater, a haven for tourists, with its sun, sea and sand, the country’s total manufacturing output is comparatively high. The country was the 18th largest in the world in 2019, with an output value for the year of nearly $325bn (all figures quoted are US dollars). The three countries immediately above Australia are Turkey, Taiwan and Poland; with Turkey being the highest of the four, with an output of slightly over $520bn. As may be expected, the top two manufacturing countries were China and the USA, with outputs of over $15 trillion [1] and over $5 trillion respectively in 2019. It’s important to note, though, that there are only 7 countries from our 38 that have an output of over $1 trillion – China, USA, Japan, Germany, Korea, Brazil and India.

Australian manufacturing was formerly in a much stronger position relative to the rest of the Australian economy. In the immediate post-WW2 years, manufacturing grew behind a protectionist tariff wall. “The philosophy was that you try and produce anything where you’ve got a reasonable chance of substituting imported goods for local products,” says Bernard Attard, a lecturer in history at the University of Leicester. Manufacturing boomed, but in the 70s, 80s and 90s, tariffs were cut for a range of reasons, including the fight against inflation in the 1970s, and a perception that sheltered and protected manufacturing militated against excellence. As a consequence, manufacturing reduced to its current level, but during the COVID-19 pandemic, Manufacturing Australia, a coalition of the CEOs of Australia’s largest industries has claimed that the country’s manufacturing sector has shown considerable resilience and carried on producing, keeping people in work and providing essentials for the nation. They say the case for re-developing on-shore manufacturing is strong. Australia could be moving up the league table in the years to come. And, at the end of the day, 18th in the global manufacturing league table isn’t bad anyway.

Dedicated Machinery – Mining Equipment: The Jewel in the Crown.

Up until 2019, the manufacture of mining machinery, for home use and for export, hugely outstripped all other machine manufacturing sectors in Australia, though it did dip between 2013 ($3.9bn) and 2017 ($2.3bn), before reviving in 2018. The 2019 value of mining machinery production was nearly $3bn, not far off the USA’s $4bn. The manufacture of mining machinery is driven by the fact that, historically, mining has been a cornerstone of the Australian economy, and more so now, because of Australia’s huge exports of minerals to a booming China. Australia is an ancient continent, offering a wealth of minerals, the world’s leading producer of bauxite, alumina, rutile and tantalum, and the second largest producer of uranium, lead, zircon and lithium. Significant quantities of iron ore, zinc, coal, gold, aluminium, diamonds, silver, and copper are also mined. And of course, it is an expansive country, relatively sparsely populated, offering plenty of room for mining activities.

As a result of the strong home market, Australian mining machinery manufacturers have developed significant expertise and built up strong exports. But our MIO Tracker forecasts a drop to around $1bn, or 35% in 2020 – a global trend – as investment in new machinery, involving significant capital expenditure, slows owing to the COVID-19 factor, with mines across the globe either operating below capacity owing to social distancing measures, or shutting down altogether. There is also a slow-down in demand for metals as key customers such as the automotive sector have been hit hard by the pandemic. After 2020, we anticipate an incremental increase in mining machinery sales up to a value of just over $2.5bn in 2024.

Food and beverage production follows a global trend, being in the top three most valuable manufacturing sectors in Australia. This tends to be the case in most countries for multiple reasons. Not just that there is always a demand for food and drink, and that populations are growing; but also because many foods are perishable and so need to be locally produced; because cultural trends tend to lead to local populations eating many foodstuffs that are only popular in the country concerned; and because many governments put at least some priority on food self-sufficiency (and most will now move further in the direction of improved food self-sufficiency due to COVID-19). With an overall market value of over $92.4bn in 2019 we predict that this sector will not suffer inordinately from the COVID factor, our projections dipping to $91.9bn in 2021 and 2022 but rising to $101bn by 2024.

Metals production, with an overall value of $74.6bn in 2019, was the next most valuable manufacturing sector. Again, this is a trend we see in most countries – metals tend to be one of the larger manufacturing sectors in any given country. We forecast that it will slip significantly to $64.6bn in 2020, but that recovery will be swift, and it will achieve a value of $91.1bn by 2024. Reading our historic data, there has been, in fact a high degree of resilience and consistency in nearly all of Australia’s manufacturing sectors. They will all (except food and beverage) take a hit from COVID-19 in 2020 (from a low of -23% for the automotive sector to a relatively slight -6% for aggregates production) but recovery is predicted to be swift, even for automotive. 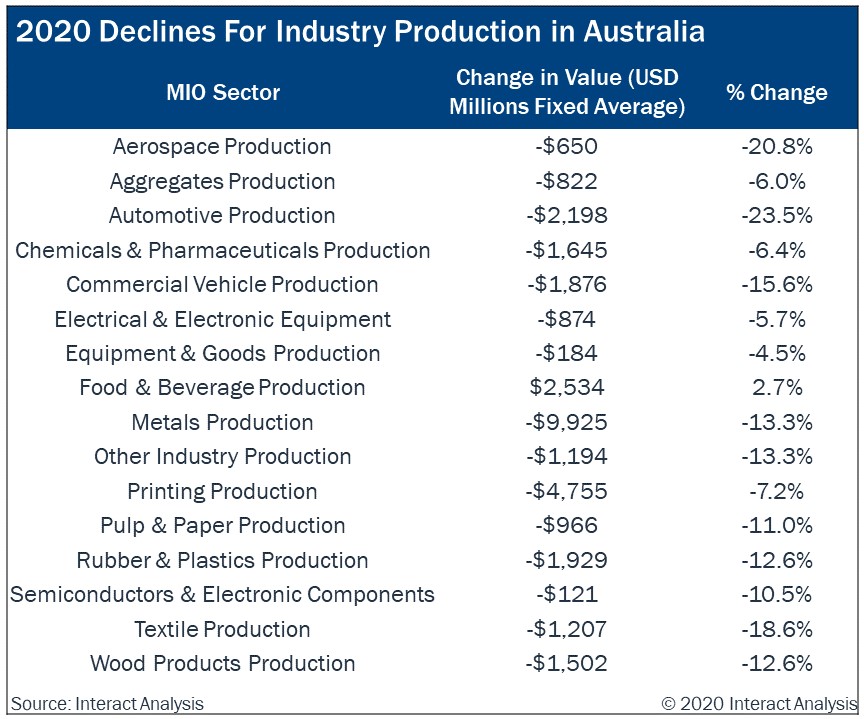 Staying with the automotive sector, it is a relatively low value sector for Australia, comprising only 3.5% of Australia’s total manufacturing production ($9.3bn in 2019). This is a big deviation from the trend we see in most other countries where automotive tends to be one of the three biggest manufacturing sectors (alongside food & beverage, and metals production). For example, in the UK, automotive is >14% of the country’s total manufacturing output; for the USA this figure is 13% and for Spain it is 15%. The reason automotive features as such a prominent part of most countries manufacturing output is that cars are big and heavy – so if there is even a reasonably-sized local population, it is usually easier to make them near to the markets in which they are sold.

For Australia, things are a little different. The demise of the Australian car manufacturing industry has been well chronicled, and many date its final end to 2017 when Holden (the Australian arm of GM) closed its Commodore production line. The reasons for it are much debated, but they essentially come down to the country having such a low population in such a large land mass. With such small volumes of cars being sold, and  long distances to ship them to reach customers even if they are manufactured in the country, Australia is simply one of those few regions where importing nearly all cars makes sense.

For what does remain of Australia’s car industry, the predicted collapse in sales in 2020 is similar to other countries: -24%, compared to -22% for the US, and -28% for Germany. This is due to the devastating effect of the COVID-19 pandemic on the automotive sector, both in terms of interruption of supply lines, in particular for components coming out of China, large scale manufacturing interruptions across Europe, and the diminishing of disposable income for potential buyers owing to unemployment or unwillingness to spend on big ticket items. For this reason, at this time, Australia is perhaps fortunate to have a relatively small automotive industry.

To continue the conversation about manufacturing output in Australia, or in any of the 37 other countries covered by the MIO, get in touch with our CEO Adrian Lloyd: adrian.lloyd@interactanalysis.com

For more information on the MIO you can download the brochure and sample reports here.

[1] Please note: the MIO doesn’t measure value add, it measures value of output, regardless of materials used. For example, take rubber: it starts as a chemical, gets converted into rubber, which gets made into a tire, built into a car, and then sold again. So, in the MIO, the same product is counted repeatedly. This does lead to some double counting – as is obvious from our $15 trillion China figure.