With the IMHX show upon us next week, we thought it would be good timing to take a closer look at the UK’s warehouse automation market and discuss some of the factors impacting it. As one of the most mature ecommerce markets globally, the UK has attracted significant investments in warehouse automation. Interact Analysis estimates that the UK warehouse automation market was worth approximately $1.4 billion last year (figure 1), with general merchandise, apparel and grocery accounting for the lion’s share. Despite the short-term uncertainties surrounding Brexit (which has in fact compounded the labour shortage issue and strengthened the case for automation), we forecast moderate to high growth for the UK with a five-year CAGR of 11%. 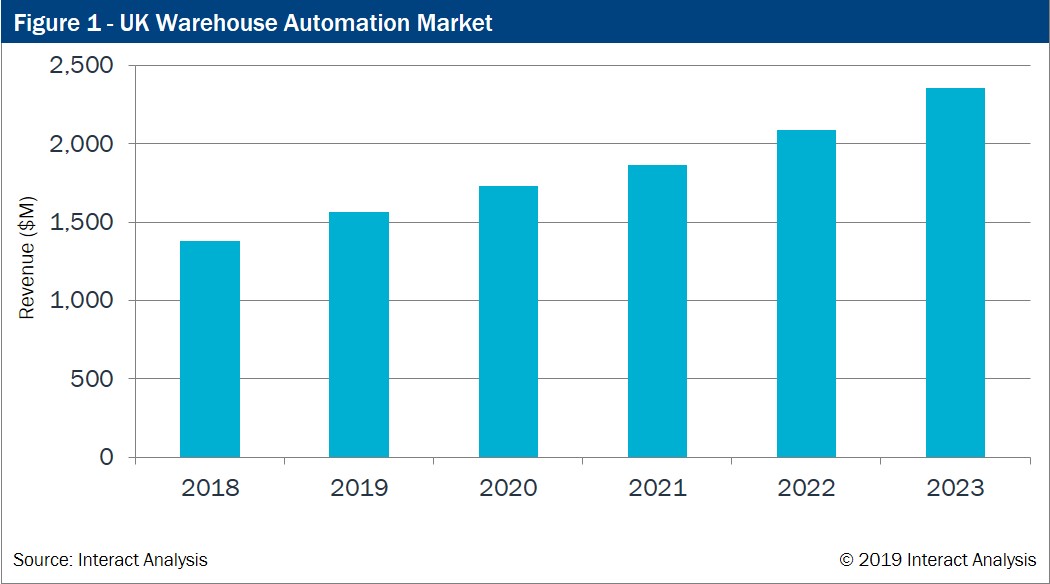 Who is Investing in Warehouse Automation?

Unsurprisingly, Amazon has been the biggest spender in recent years when it comes to warehouse automation in the UK. Having acquired Kiva Robotics in 2012 for $775 million, Amazon has installed more than 200,000 inventory-moving mobile robots globally which are able to significantly speed up the order cycle time (see figure2). Amazon uses these robots within several of its sites across the UK including Dunstable (LTN4), Doncaster (LBA1) and Tilbury (LCY2). Amazon has around 18 million square foot of warehousing and fulfilment capacity in the UK with an additional 2 million planned for the future. Although its Kiva robots are produced in-house and are not included within our market projections, Amazon also works with several third-party warehouse automation vendors which supply and integrate the sorters, conveyors and storage facilities within Amazon’s distribution centres, spending hundreds of millions of pounds annually. 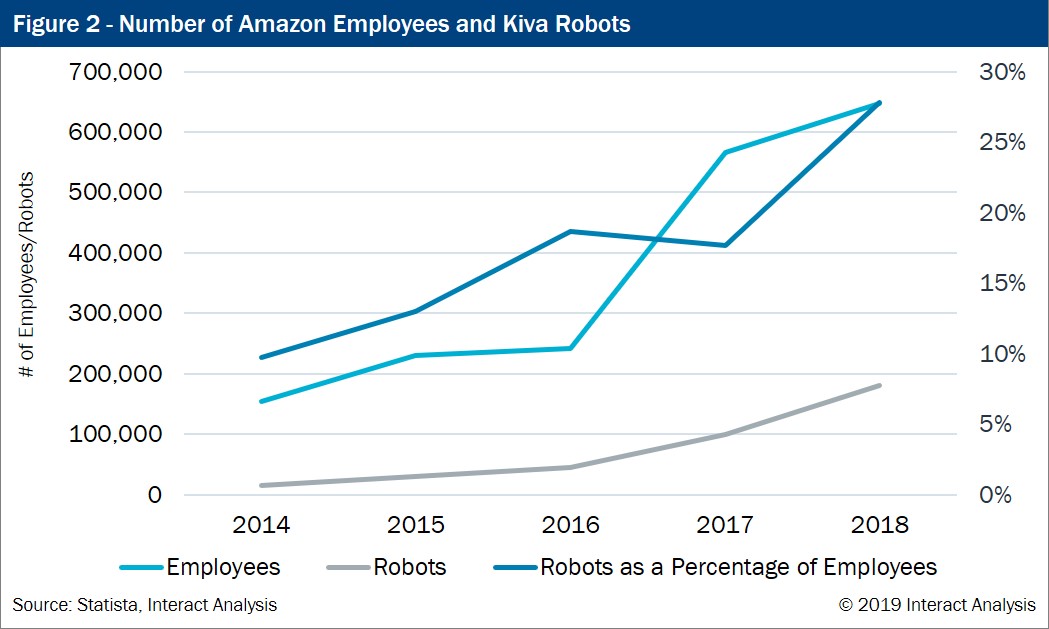 We estimate that Amazon spent between $2.2 – $3 billion on warehouse automation in 2018. Although the vast majority of Amazon’s investments in warehouse automation will be for its US distribution Network, it’s estimated that approximately 9% of Amazon’s net sales in 2018 came from the UK which is its third largest market behind the US and Germany. Therefore, Amazon is investing heavily in the UK in order to maintain its market leading position.

The UK-based apparel retailer, ASOS, relies heavily on automation to process its many thousands of orders and returns. For example, in 2017, ASOS completed the installation of an Interroll sortation system with 122 chutes which doubled its sortation capacity. ASOS, like many direct-to-consumer retailers, sees automation as a key differentiator and continues to develop its logistics networks across the UK and internationally. It has invested heavily in automating its logistics which has been a major driver in its success by lowering consumer shipping costs and speeding up delivery whilst at the same time lowering its operational costs.

Following its success in the UK, Ocado signed a service agreement deal with US-based grocery chain Kroger in May 2018 enabling Ocado expand into the North American market. Nine months later, M&S acquired 50% of Ocado’s retail business which will see Ocado deliver M&S grocery products once its current partnership with Waitrose expires. Following these announcements, Ocado’s share price has increased from £557 before the Kroger deal was announced to £1,344 (at the time of writing).

It wouldn’t be a proper discussion of the UK without mentioning Brexit! With continued uncertainty surrounding the future trading relationship with the European Union, many UK retailers and manufacturers alike are postponing capital intensive projects until a more stable economic and political climate is reached. Yet at the same time we have the opposing trends of record employment (partly due to many EU nationals leaving the UK), increasing wage rates and low warehouse capacity due to Brexit stockpiling. Yet during our research for our latest report looking at the future of the warehouse automation market, we’ve heard several accounts from warehouse automation vendors expressing concerns over demand from the UK market.

In addition, there’s signs that the UK’s e-commerce market is stagnating in the short-term. Recent data showed that annual ecommerce growth in the UK was flat Q1 2019; whilst Germany, the US and Spain, on the other hand, grew at 10-20% year-on-year. This is corroborated by a study done by Mintel which found that in 2018 45% of UK shoppers did their grocery shopping online at least once, down from 49% the previous year. The author of the study commented, “Growth is slowing, and the number of users is plateauing as retailers struggle to encourage new customers to try their services”.

As the uncertainties surrounding Brexit eventually clear up and companies are able to make investments with more confidence, we will likely see a resurgence in warehouse automation investments. Furthermore, it’s unlikely that e-commerce will continue to plateau. The maturity of the UK’s e-commerce market (despite poor short-term growth) and the consumer expectation of next-day delivery will most likely ensure long-term and sustained growth for the UK warehouse automation market.

If you’re attending IMHX next week at the NEC, Birmingham and would like to meet with one of our analysts, please contact us and we’d be happy to set something up.